After the live broadcast is “driving into” the in-vehicle scene, how will Litchi Podcasting be accelerated?


At 5 pm on April 6, the Litchi Podcast launched its first live podcast.

Pan Luan, a technology reviewer sitting in the red Xiaopeng P7 car, launched a live broadcast. Lai Yilong, the founder and CEO of Lychee, sitting in the office connected to the microphone from his mobile phone. The two chatted for two hours.

This is also the first time that podcast live broadcasting has been applied to the car scene.

After four and a half years, Litchi Podcasting has entered the on-board podcast live broadcast platform with the help of self-developed real-time communication technology “DOREME”. This time, Lai Yilong made it clear that he would “treat new energy vehicles as an intelligent platform” and “podcasting is the most suitable application for in-vehicle scenarios”. According to this logic, Litchi will dig into the in-vehicle scenarios and make “in-vehicle podcast + live broadcast” become Its new kinetic energy to build a global audio ecosystem.

“I have a podcast complex.” Lai Yilong said to Pan Luan during the live broadcast.

When Litchi was founded, it shouted the slogan “Everyone is a podcast”. With a low threshold, it has acquired a large number of users, and gradually completed the layout of audio entertainment products, audio live broadcasts and various interactive audio products. , It has also cultivated interactive genes and social soil.

Starting in 2020, podcasting has revived, and Litchi has launched an independent app “Litchi Podcast”, hoping to take a key step in breaking through the circle with voice based on the previous layout.

Podcasting is different from one-way and systematic content output. Lai Yilong visualizes it as “In a tavern, three or two people are drinking and chatting, and there are onlookers listening at will.” To be precise, podcasts are more like a game. Night talks around the furnace, less knowledge output, more collision of views, dilute the sense of authority, and the atmosphere of equal communication is stronger.

The characteristics of podcasting also make it naturally adapt to the car scene. The positioning of Litchi Podcasts is lightweight, youthful, interesting, and personalized. Together with the AI-driven recommendation engine, it can achieve a personalized listening experience for users. 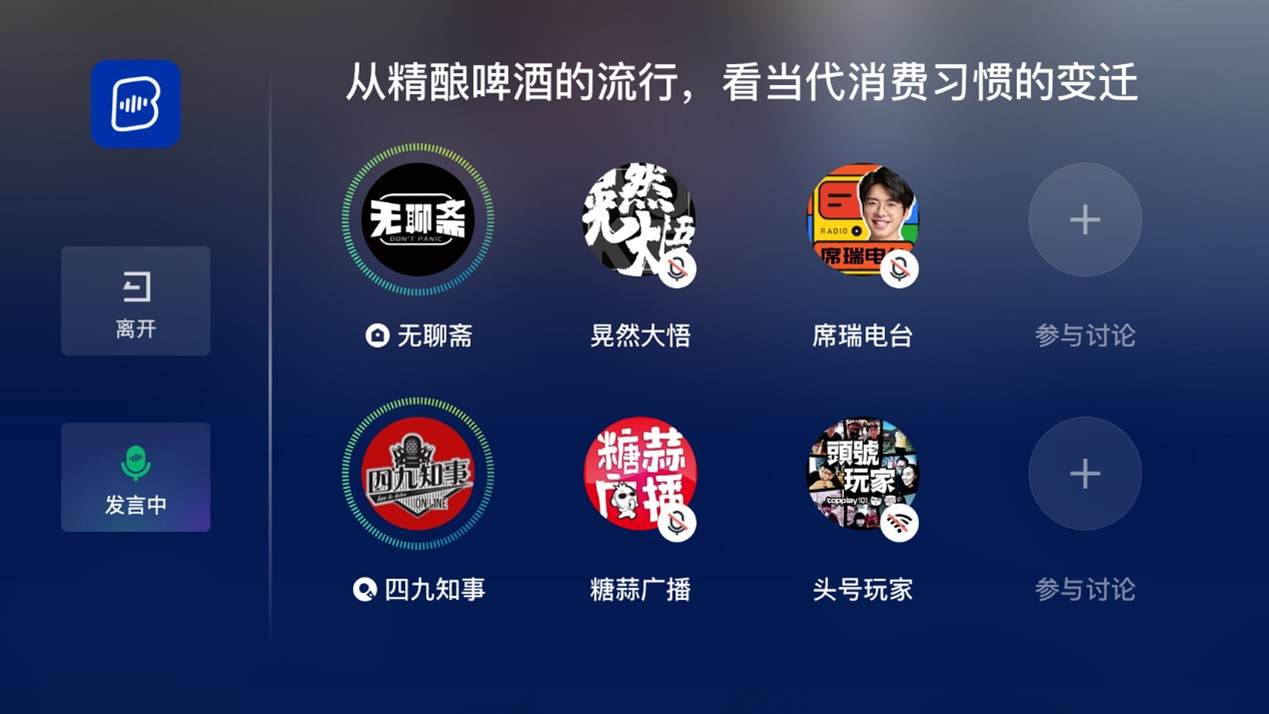 Litchi Podcasting focuses on in-vehicle scenarios. In addition to the product form, there are also user and commercial considerations.

Lai Yilong once explained: “Litchi Podcast hopes to attract and expand the user circle with more selected podcast content, and reach more high-tier cities and young and middle-aged users. Therefore, we cooperate with many KOLs to match high-quality content with pertinence. Launching and multi-terminal access such as in-vehicles can further reach a more diversified user group.”

Litchi Podcasting not only fits in with the car scene in the target user circle, but the stronger purchasing power of car owners and users can also feed back the platform to improve the revenue structure.

On March 17, Litchi Podcasts launched a podcast program “POP PARK” jointly produced by Bubble Mart and Litchi Podcasts. The debut of the first branded podcast marked the beginning of Litchi Podcasting to explore more diversified revenue models for the B-side , And the accurate user groups in the car scene will add weight to the brand’s promotion decision.

As early as 2019, Litchi began to explore business models for podcasts. A dozen podcast programs were selected on the Litchi platform to try to pay. After one year of practice, Lai Yilong was satisfied with the results: “The user’s repurchase rate is 60%. -70%, the income of the podcaster is more than 1 million, and the least is more than 200,000.”

After verifying the business model on a small scale, the Litchi Podcast APP was launched in early 2021. On the day of its launch, it teamed up with 7 celebrities, including Hong Huang and Gu Da Vernacular, to create a super podcast IP. Lychee Podcasts also value the exclusive status of the podcaster. “Wonderful Talk” debater Xi Rui and football commentator Su Dong have signed exclusive contracts with Lychee Podcast.

At the same time, after screening the UGC content library of Litchi App Shanghai, part of the high-quality podcast content is also synchronized to Litchi Podcast.

However, in-vehicle podcasting is not a pure content distribution platform. In the plan of Litchi, cars are regarded as a new intelligent operating system. Lai Yilong emphasized more than once that “we have to make a new product for this platform.”

First of all, in terms of content selection, the in-vehicle terminal must be targeted to meet the needs of the driving scene, which further tests the content operation capabilities of the platform.

It is reported that in addition to the existing life entertainment content, after the live broadcast of the in-car podcast is launched, efforts will be made to develop podcast content in such categories as technology and investment.

Looking back on the content, how to attract outstanding creators has also become a new topic for Litchi Podcasts. The greatest charm of podcasting lies in the collision and output of views between people, and the objects users subscribe to are more directed to “people” rather than the content itself. With the diversification of in-vehicle podcast content, coupled with the fact that live podcasting has greatly reduced the threshold for participating in content discussions, the requirements for the ability and quality of podcasters indirectly have also become higher.

To attract creators to join, platform environment, support policies, and monetization opportunities are indispensable. The plan of Litchi Podcasting is to use the influence of celebrities and industry KOLs in the initial stage to gradually establish the public’s awareness of podcasts, and at the same time strengthen the vehicle layout, seize the core consumption scenes, and use AI-enabled content recommendation and distribution system for the medium and long-term End content creators provide traffic support, and then conduct diversified commercialization attempts.

This also means that in-vehicle podcasting must not only adapt to the characteristics of human-computer interaction, but also ensure that users can still get a stable and smooth audio experience even during live interaction when the vehicle is driving at a high speed. This is a great impact on the technology of the platform. Ability is a bigger challenge.

According to Litchi, the live broadcast function of in-vehicle podcasts is supported by its online audio technology developed for many years. The technical person in charge of Litchi Podcasts stated that the real-time communication technology (RTC) provided by Litchi’s self-developed “DOREME” project can provide stable technical support for real-time transmission of audio data for Litchi products.

Litchi Podcast’s internal personnel also revealed that the podcast live broadcast function has done a lot of tests on safety performance and signal reception before it goes online, “mainly to ensure that the design of human-computer interaction meets driving safety regulations, and whether it can maintain natural and high quality during high-speed driving. High-fidelity audio communication”.

“Simple voice and gesture control is most suitable for the in-vehicle environment.” Lai Yilong said, “In the future, we will specifically design simple and interesting interactive methods, such as automatically turning on the screen after detecting gaze, and using voice to participate in voting and comments. Under the premise of ensuring driving safety and complying with traffic laws, interactive elements are added while minimizing the impact on the driver.” It is worth noting that Litchi Podcasting enables real-time dialogue and interaction in mobile phones and in-vehicle scenarios. Some people in the industry believe that Litchi Podcasting breaks the boundaries of interaction between cars and mobile phones, and realizes the seamless connection between mobile and in-vehicle terminals. Voice interaction between multiple different terminals can be carried out anytime and anywhere. This is the biggest technical competition of Litchi Podcasting. force.

The layout of Litchi Podcasts on the vehicle side has been continuing.

In addition to Xiaopeng Motors, Litchi Podcasts has also reached cooperation with GAC Trumpchi, GAC Aeon, and in-vehicle intelligent platforms, including BYD’s car intelligent network connection system DiLink, and smart in-vehicle cloud service solution Huawei HMS for Car. With the help of the investor Wuyuan Capital, it has also joined hands with automobile chip manufacturer Horizon to deepen cooperation with the bottom of the chip.

Lai Yilong believes that one of the biggest dividends and opportunities for online audio is 5G and the other is IoT. 5G improves the speed and latency to optimize the user experience of audio content and expand the distribution channels of audio content. IoT makes smart car scenes an important stage for audio. 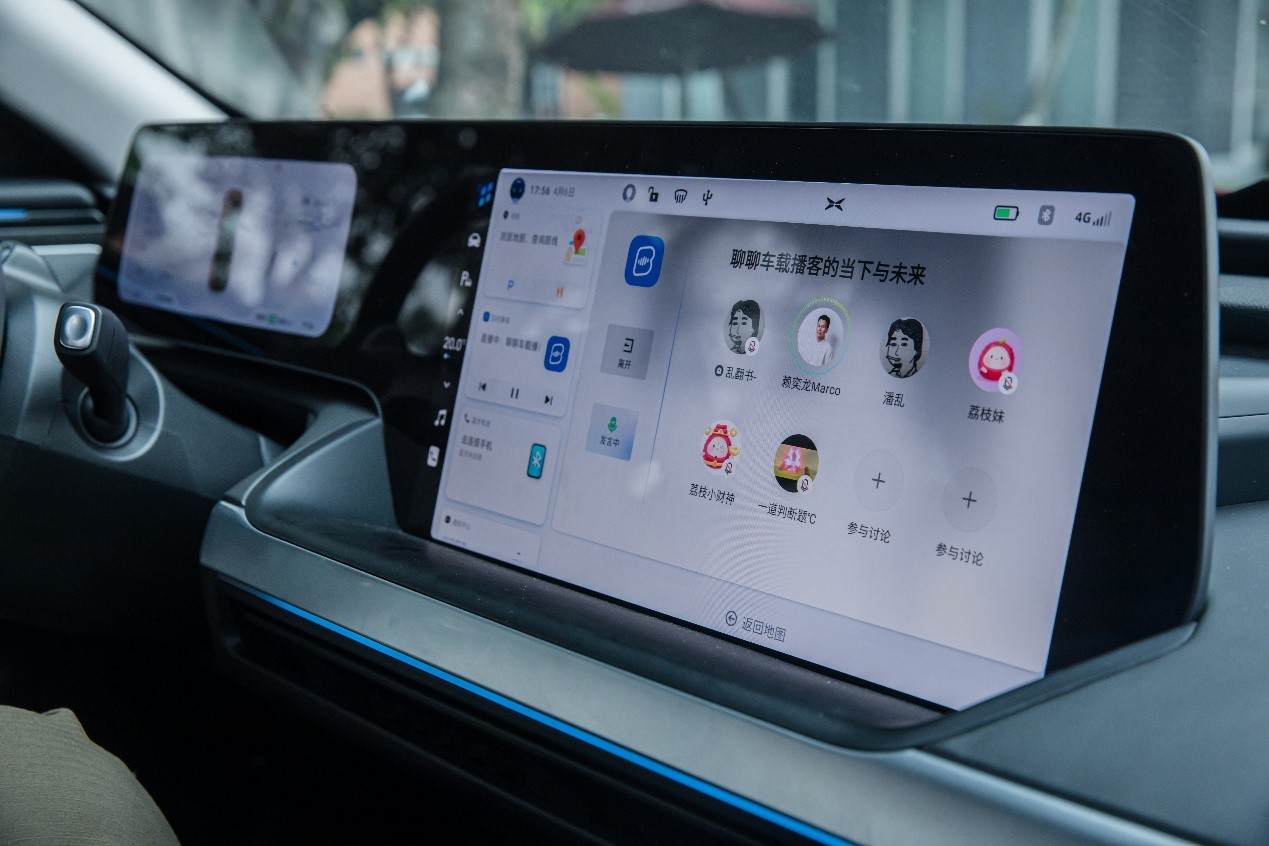 But this is only the first layer, because “ultimately the users brought by the car are not limited to the car.”

One of the advantages of podcasting lies in the applicability of multiple scenarios and multiple terminals. When mobile-based terminal devices are reconstructed by many networked devices such as cars, speakers, smart wearable devices, and users can freely switch between various terminals, the first-mover advantage of the vehicle-mounted terminal can be extended to the entire scene.

In the live conversation with Pan Luan, Lai Yilong mentioned a podcast in Litchi, called “Women’s Sleeping Conference”. Several college girls in the same dormitory uploaded their nightly sleep talks after recording, which was actually very popular. , Has accumulated hundreds of thousands of fans.

“There is nothing particularly profound, but a particularly vivid life.” Lai Yilong feels that this is the moment when the vitality of podcasts is truly revealed.

After graduating, the girls went their separate ways, and “Women’s Sleeping Party” was interrupted. Lai Yilong imagined that one day in the future, they would reunite online and open another file of “Walking Workers Sleeping Party” with the help of Lychee Live, and continue chatting casually. .

“There are many such scenes, but when they are used, we have to wait until the day when podcasts truly flourish.” Lai Yilong said.