After all I want to return to my previous career! Which cheap SIM is easy to move out?

“Cheap SIM” provided by “MVNO (Virtual Mobile Telecommunications Carrier)” and “Sub-brand” of a major carrier has become established as a service that can keep communication charges low. Those who have already switched to a cheap SIM will realize that the cost is lower than that of a major carrier, and finally, in preparation for the consumption tax increase of about one month before implementation, consider switching from now on. Some people will.

However, cheap SIM also has some challenges. As it appears in the monthly communication speed survey conducted by Kakaku.com magazine, the communication speed tends to be slow during the busy traffic hours (12:00 on weekdays or from evening to night). Depending on the carrier, there is no single store, and in many cases support is available only via telephone or the Internet.

Therefore, this time, while collecting the contract cancellation fee and the transfer fee of the MNP system centered on carriers who are conducting speed surveys at Kakaku.com magazine, I would like to search for a cheap SIM that is easy to move to other companies or cancel. I will.

Two types of minimum usage period according to type

The minimum usage period differs depending on the carrier and price plan, but it can be broadly divided into two types.

Also, only the voice call SIM can take over the number using the MNP system. Therefore, the price plans and various fees mentioned in this article are for voice call SIM.

Now, let’s check the characteristics by type of minimum usage period and type.

● What will be renewed by contract renewal?

The minimum usage period will continue repeatedly due to the renewal of the contract, which is a cheap SIM of Y mobile and UQ mobile called “sub-brand” of major carriers. Applicable price plans are “Smartphone plan” for Wymobile, “Talking plan” and “Fit plan” for UQ mobile.

It has the same content as the so-called “two-year binding” of major carriers, both have a renewal month every two years, and if you change or cancel at a timing other than the renewal month 9,500 yen (excluding tax, the same below) Will be charged.

In addition, the transfer fee for the MNP system also varies depending on the period from the contract. It will be 3,000 yen if 6 months have passed since the new contract, but if you change within 6 months, you will be charged 6,000 yen, which is double. In other words, if you try to transfer within 6 months after contracting, it will cost 15,500 yen in total.

● What ends in a certain period after the contract?

The main period is 12 months (1 year), but there are also cheap SIMs with relatively short periods, such as 5 months for b-mobile “990 Just Fit SIM” and 6 months for OCN Mobile ONE. In addition, Rakuten Mobile’s “Super Hodai” has a minimum usage period of “12 months”, “24 months”, “36 months”, and can be selected from three ways, depending on the length, discounted monthly fee Is changed.

● What is the minimum usage period?

In both cases, the contract cancellation fee is not charged only for cancellation, but mineo’s “ 13 months ” and AEON Mobile’s “ 90 days ” where the transfer fee is expensive are “ substantial minimum usage period ” for those who want to move out You can say that. Please note that the transfer fee will not be high even if you transfer to AEON Mobile from another company using the MNP system within 90 days. 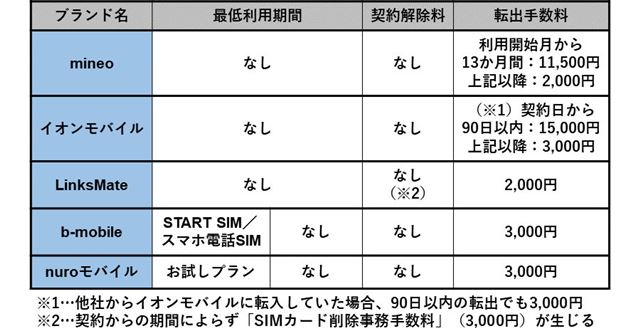 [Summary]Cheap SIMs that are easy to transfer in a short period are rare!

As described above, many cheap SIMs have a one-time minimum usage period, and if you cancel within the period, you will be charged a contract cancellation fee of around 10,000 yen. Also, even with a cheap SIM that does not have a minimum usage period, the transfer fee when using the MNP system may be expensive, so it is virtually the same as being charged a contract cancellation fee.

In any case, only the Links Mate is the only carrier checked this time that the contract cancellation fee will not be charged for short-term transfers and the transfer fee of the MNP system will not be high.

LinksMate’s price plan allows you to choose from 5 types of data usage, from small capacity 1GB to large capacity 30GB. Options such as “MatePhone” (850 yen per month), which is a discounted call charge each time the first 10 minutes are free, and “Count Free Option” (500 yen per month), which is a zero-rating function that can reduce communication traffic such as game apps and SNS apps. Services are also relatively substantial.

Also, if you were transferred from another company using the MNP system … In other words, only in the case of “I want to return to the previous carrier”, AEON MOBILE will also cancel the contract for those who want to transfer in a short period of time. We do not charge any fees or high transfer fees. You can call it a cheap SIM that you can transfer relatively easily because you can return to the original carrier with only 3,000 yen transfer fee (and contract fee at the transfer destination).

B-mobile’s “START SIM” and neuro mobile’s “trial plan” etc. are not charged contract cancellation fees or high transfer fees, but these are positioned as trial-only products for new users, There are restrictions such as the amount of data used is set low and some options are not available.

I’m interested in cheap SIM, but if I can’t get used to it, I would like to return to my original career immediately … If you are hesitant to change trains, it’s a good idea to try such a cheap SIM first.

However, if you use the MNP system to transfer to another carrier, you will definitely incur expenses of several thousand yen including the transfer fee and new contract fee. Don’t forget too much, “Because you can return immediately,” and remember to carefully consider including the need to switch to a cheap SIM.

Saku Shinshu is a freelance writer who sends mobile information and is the father of two children. I can’t help but contract for a cheap SIM that I was interested in. About 80% of the curry is for lunch on the day I came to Tokyo.