Samsung Galaxy A03s is one of the cheapest phone models released by Samsung at the moment. Despite the low price, the device is still fully equipped with interesting features to become a good choice in the segment, including a large screen, 3-lens camera cluster, battery life. long and fast charging speed.

At the time of writing, the Samsung Galaxy A03s is the newest member of the Galaxy family. Usually, the cheaper Galaxy models are released with many different versions, and the A03s is no exception. In addition to the A03s version with a mid-range performance level that we used in the review, there is also an A03 version with a slightly higher performance level.

Galaxy A03s is equipped with an LCD screen with a diagonal length of 6.5 inches, 720p resolution. Inside the plastic shell of the A03s is a chip with mid-range performance Helio P35 and a battery with a capacity of 5000 mAh.

The rear camera cluster of the device is made up of a 13MP main camera, a 2MP macro camera and a 2MP depth sensor. With the ability to take wide-angle, Panorama, font removal and close-up photos, Galaxy A03s gives users a quite flexible shooting experience. Located on the front, the device is equipped with a selfie camera lens with a basic resolution of 5MP.

The device is released with a fairly basic default configuration version of 3GB + 32GB, and you can upgrade it to a maximum of 4GB + 64GB. Because the device possesses a low level of performance, Galaxy A03s uses the lighter operating system OneUI 3.1 Core, built on the Android 11 platform. This operating system has been cut with some features compared to other models. The higher-end Galaxy.

As the latest model on the low-cost phone market, what can the Galaxy A03s bring to help the product compete on par with other competitors? The answer will be in today’s article. 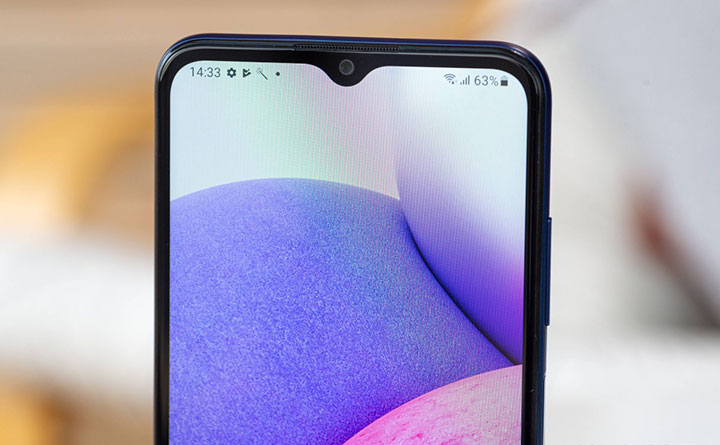 The Samsung Galaxy A03s is a low-cost phone model, and the strengths of the models in this segment are often not in the design. The outer shells of these models are usually not made from high-grade materials such as glass, metal, or are treated with water resistance. Even so, Samsung Galaxy A03s is still a phone with good build quality and high level of finishing.

The device has a seamless back design from the back to the frame. The back of the device is also designed quite carefully. At first glance, you can feel the typical design language of the Galaxy A series, with clean lines, rectangular camera clusters and a grip surface.

The Samsung Galaxy A03s version that we used in the review has a blue back. During daily use, the back of the device has a bit of fingerprints, but it doesn’t show much on this color version.

The front of the machine is equipped with a 6.5-inch LCD screen. The screen is cut with a small teardrop-shaped array to make space for the 5MP selfie camera and a few other sensors. This cutting array is not too large in size, and will not affect your actual use experience much.

The screen is protected by a layer of flat glass, but we don’t have any information on the manufacturer of this glass. What we do know is that the screen of the Galaxy A03s does not come with a protective film. This is a significant difference when compared to other competitors in the low-cost segment.

The left side of the device is equipped with a SIM slot. This slot can hold up to 2 nano SIM cards and 1 microSD card. And finally, the power button and volume up and down buttons are located on the right edge. In addition to the on/off function, the power button of the Galaxy A03s is also integrated with a fingerprint sensor, helping you quickly log in the system’s password every time you take out the device to use.

Galaxy A03s is not a phone with a compact design. In fact, due to the rather thick bezel, the overall size of the device is on par with most 6.7-inch mid-range models on the market. Equipped with a 5000 mAh battery, the device has an overall weight of 196g. 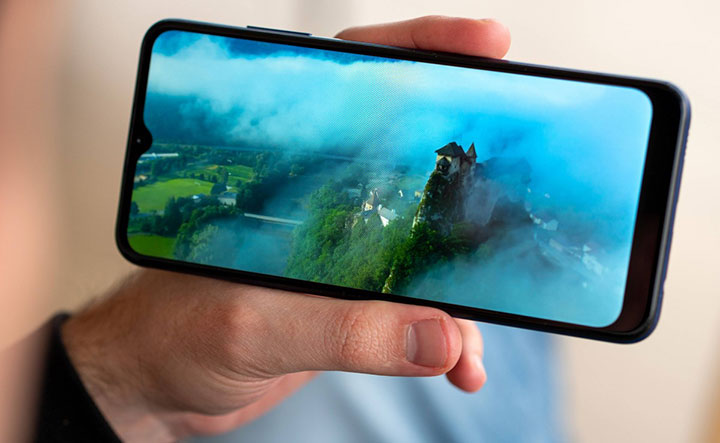 Galaxy A03s is equipped with a 6.5-inch diagonal PLS LCD screen, with a teardrop-shaped cutout at the top and curved at 4 corners. In advertising terms, Samsung names this type of panel Infinity-V. The screen has a fairly basic resolution of 1600 x 720 pixels, which translates to a pixel density of 270 ppi.

The screen of the Galaxy A03s is basic, without any unique features. Specifically, the refresh rate of the screen only stops at 60Hz, does not support HDR display and can only display colors in the sRGB range.

Through our testing, the screen has a maximum brightness of 488 nit. The screen is capable of displaying black tones with good depth for LCD panels, providing a high contrast ratio of 1718:1.

Galaxy A03s does not have any other display settings in the settings, so you can only use the device through the default screen setting. The phone supports sRGB color gamut display, but the accuracy is not very high. Specifically, the white and gray tones on this background are a bit bluish. 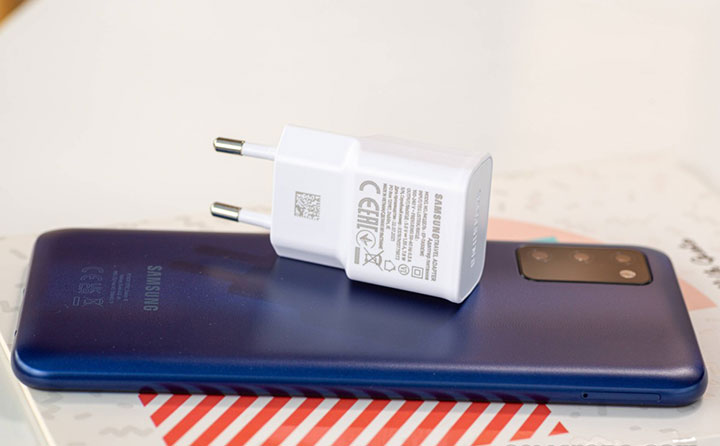 Galaxy A03s is equipped with a battery with a fairly large capacity of 5000 mAh. This battery will provide sufficient usage time when combined with the 720p screen and the low-performance chip Helio P35.

During our testing, the Galaxy A03s performed well with a result of 122 hours in the endurance test. In addition, the device also has impressive results in different battery life test conditions, including calling, web surfing, video streaming and even standby time. 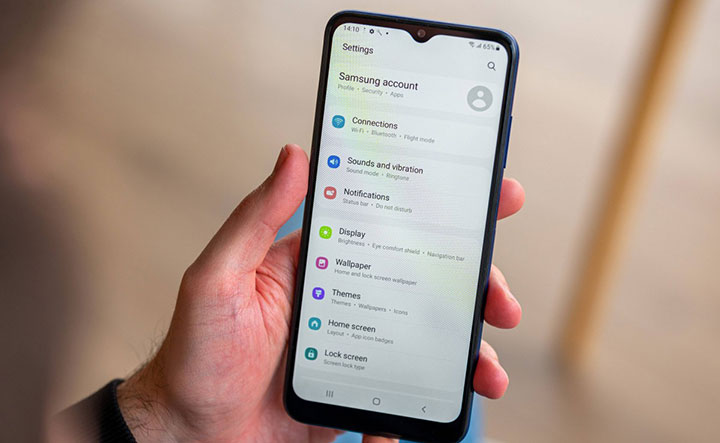 Galaxy A03s uses a chip with basic performance, Mediatek Helio P35. This is an 8-core chip, made up entirely of Cortex-A53 cores, with 4 of them clocked at up to 2.3GHz, the remaining 4 cores clocked at 1.8GHz. The chip has a higher performance level than the Snapdragon 450 series chip – which was equipped on previous generation Galaxy lines, such as A02s or M02s.

At the time of writing, the Galaxy A03s was released with several versions of RAM/internal memory, including 3GB/32GB, 4GB/32GB, and 4GB/64GB. The version we review uses the most basic configuration level, which is 3GB of RAM and 32GB of eMMC 5.1 memory.

During actual use, the Galaxy A03s delivers an acceptable level of performance for a low-cost device. The machine has a fairly slow performance level at all tasks, even when you are just flipping through the interface. 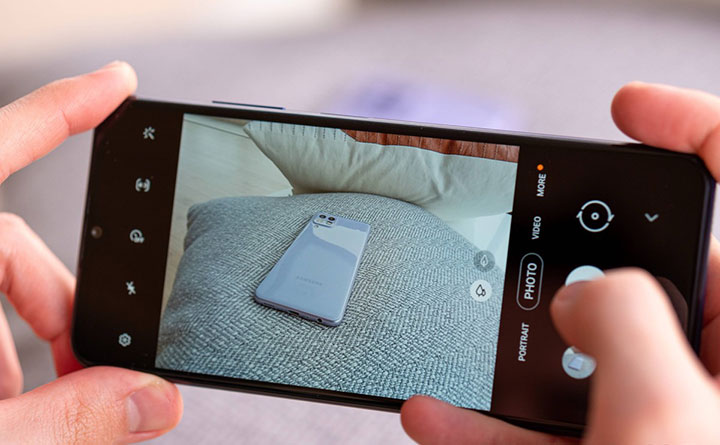 Samsung Galaxy A03s is equipped with a 3-lens camera cluster with a rather modest configuration. This lens cluster is made up of a 13MP main camera, a 2MP macro camera and a 2MP depth sensor. On the front of the device is equipped with a selfie camera with 5MP resolution.

The 13MP photos taken from the main lens are quite good quality, with true colors, high contrast and impressive dynamic range. The details of the foliage when captured are shown very well and faithfully. The camera cluster of the Galaxy A03s is also equipped with a depth sensor of 2MP resolution, which is quite useful when you take pictures to remove fonts. 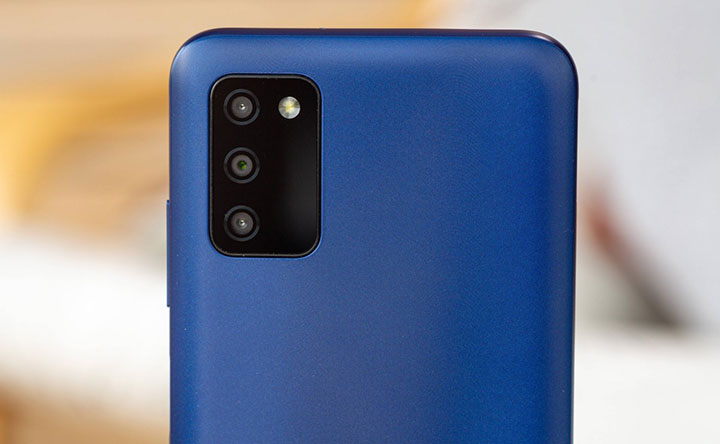 Sold in the low-priced segment, Galaxy A03s is a good quality phone model, giving users a high level of use value for money. The device is equipped with a good screen, a large capacity battery and comes pre-installed with the latest version of Android operating system along with a main camera with stable image quality. Samsung Galaxy A03s is a good choice if you are looking for a quality phone in the low-cost segment.