Galaxy S12 may be a breakthrough in design on modern smartphones.

Although Galaxy S11 is far from being released into the Galaxy S10, it has not been hot yet, but recently, a concept image of the Galaxy S12 has appeared, showing an extremely modern and futuristic design. with true overflow screen, not just curved to the sides like the current Galaxy generations but also curves out to 4 surrounding edges.

Specifically, this Galaxy S12 image is posted by a leak expert Ice Universe (@UniverseIce) on social networking site Twitter, showing that a Galaxy S12 with the entire front is all display screens, even parts. The edge of the border will also be the edge of the screen. The screen edges may be used to display notifications and utility toolbars.

With a curved screen that spans four such edges, the Galaxy S12 can eliminate both charging ports, speaker strips and other hard keys, making full use of wireless connections and supporting sensors. In addition, the selfie camera hidden under the screen will also be integrated on Galaxy S12. The image does not show the back of the device but it will definitely have the same modern design.

Although it is just a concept image and nothing is sure that Samsung will "learn" from this unique design, but the unique feature of Ice Universe's Galaxy S12 image is from the fact that it is completely built by Microsoft PowerPoint, not by any 3D graphics software. Although he does not share the way to do it, but it is certainly not easy to create such a detailed image. 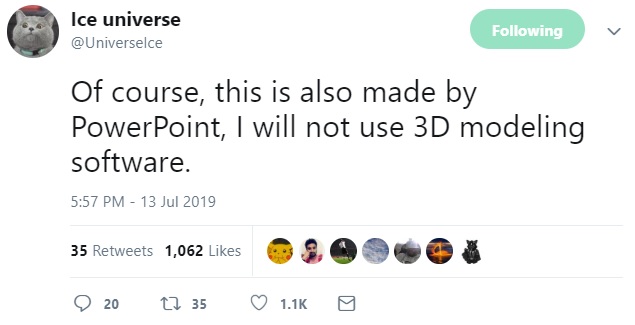 Until the Galaxy S12 was released, it will soon be released on August 8, Samsung will officially launch the new Galaxy Note 10 at its annual UNPACKED event. We will update the latest news about this device, especially the Samsung product line when it is released.

(Giveaway) Copyright for free Clipdiary, which supports copying from March 25 to March 27

How to use MP4 to MP3 Converter