Compared to the previous version, the Acer Nitro 5 has a remarkable change in the screen. We will get a screen with a scan rate of up to 144 Hz instead of the previous 60 Hz, and the experience itself is also very smooth. During mouse movement and multitasking, the 144 Hz screen fulfills the role assigned to it. 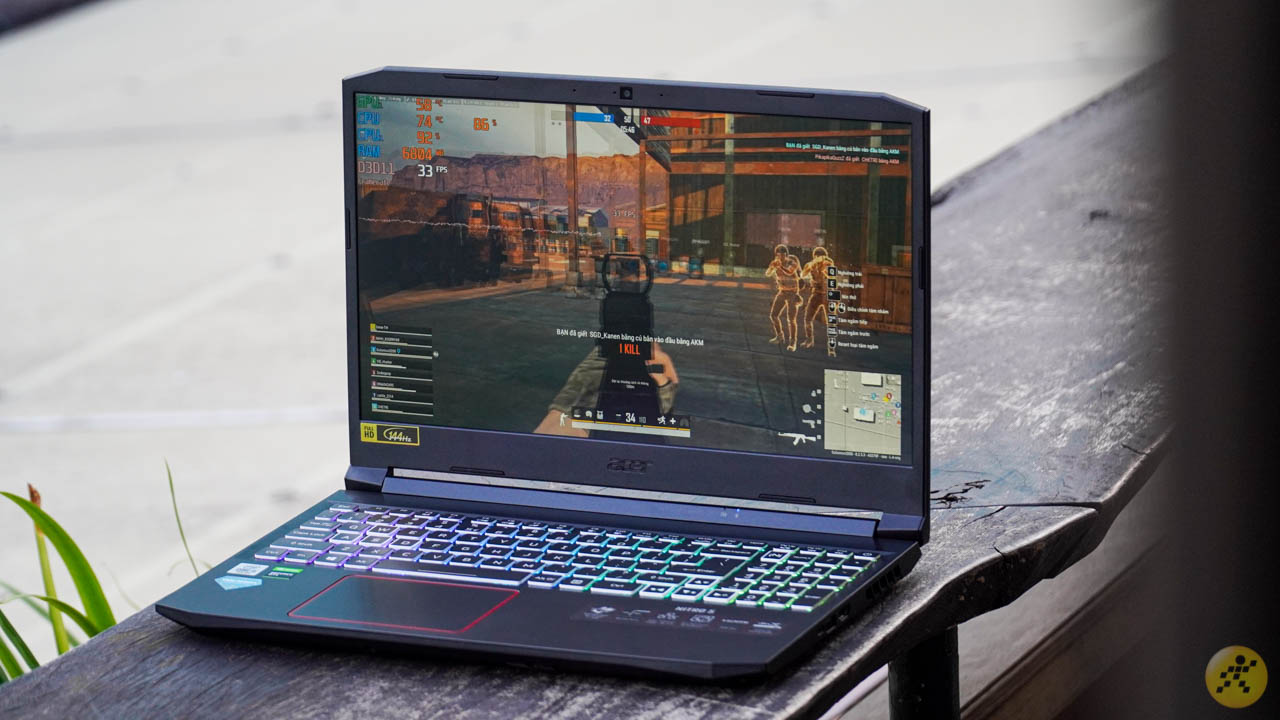 Acer Nitro 5 owns a screen with a refresh rate of 144Hz.

Not only that, the 144 Hz screen is also an expensive support for the fight against hot titles on the market today. During the battle of League of Legends, indeed, Acer Nitro 5 brings a very happy but stable experience, making it easy to control the game and without any obstacles.

Owning a screen up to 15.6 inches in size and Full HD resolution, the Acer Nitro 5 will deliver sharp enough images for you to work, study and play. Along with that, the combination of the IPS LCD panel will bring about high brightness for you to use in a variety of conditions and wide viewing angles.

Finally, the screen of the Acer Nitro 5 is also integrated with Acer ComfyView technology. Believe that this technology will help you a lot when using your laptop in outdoor conditions, with direct sunlight. 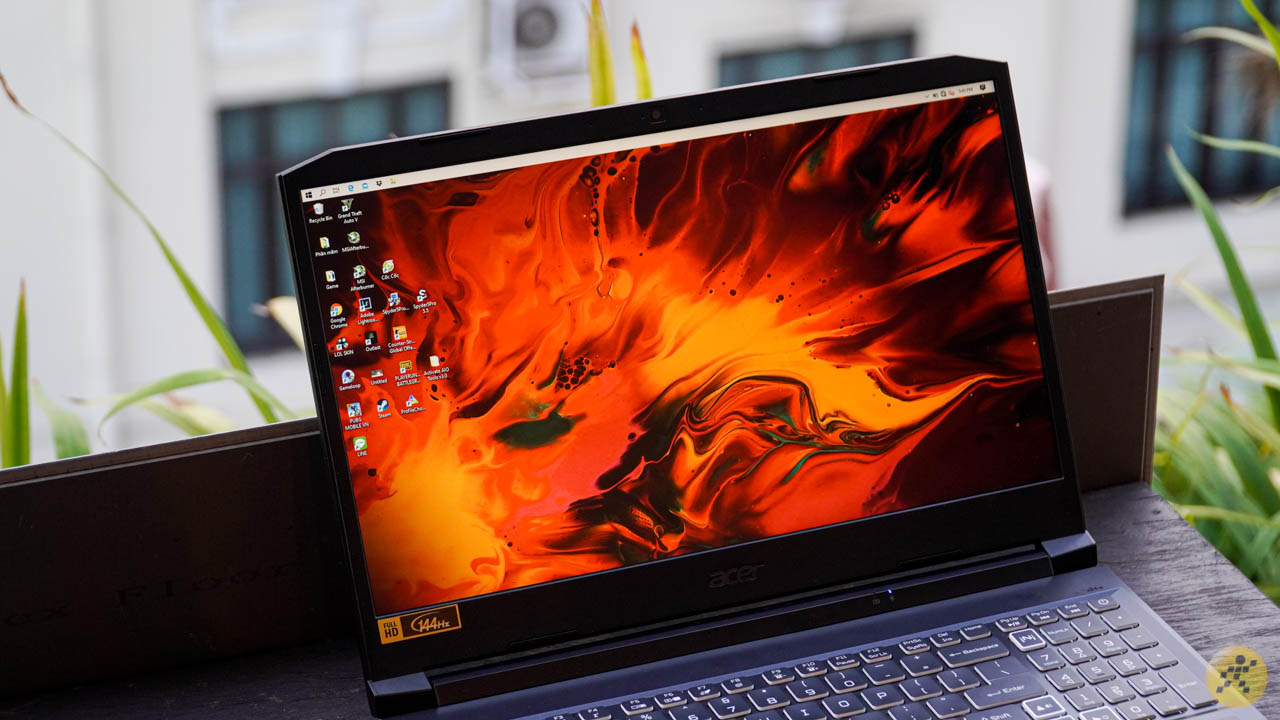 The display of Acer Nitro 5.

2. Strong performance with Intel Core i5 Gen 10, what about heatsink?

Before stepping into evaluating the performance of the Acer Nitro 5 gaming laptop, let’s take a look at the hardware parameters to see if it is impressive: 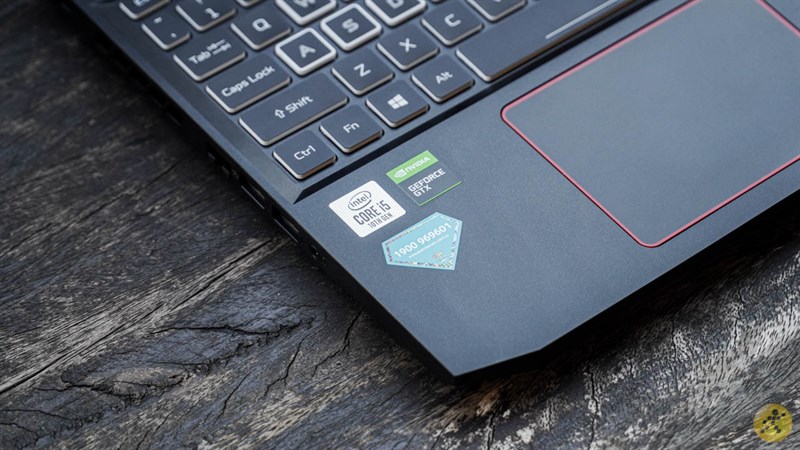 If you do not do it, you must do it for once you have done it. It is a funny saying that we often spread by word of mouth, but it is a valuable lesson for each individual and group. Acer is no exception, the company knows that once it has been improved, it must be innovated so that users feel satisfied. And that’s why the company has upgraded its discrete graphics card from NVIDIA GTX 1650 4G to NVIDIA GTX 1650Ti 4GB. You may think this upgrade is too small compared to before, but look at the price range and overall what you get with the Acer Nitro 5.

You may not know that GTX 1650Ti uses Touring microarchitecture available on high-end cards such as RTX 2070 and RTX 2080. Although it does not support Ray Tracing technology, GTX 1650Ti still gives high performance, more powerful than GTX 950. 2 times more powerful and 70% more powerful than the GTX 1050. Plus, with the active support from the Intel Core i5-10300H CPU offers an impressive gaming experience in its price range. I have tested two League of Legends and PUBG games in the two videos below:

Looking at the two games above, you will probably see that the FPS fluctuates as expected when League of Legends for FPS ranges from 60-72 FPS and PUBG for the range from 35-52 FPS. But remember, I am pushing the configuration to the highest level so the FPS drop is obvious. So if you lower the graphics level, make sure the machine will be smoother. In addition to testing the game experience, I also tested the performance through Geekbench 5 software: 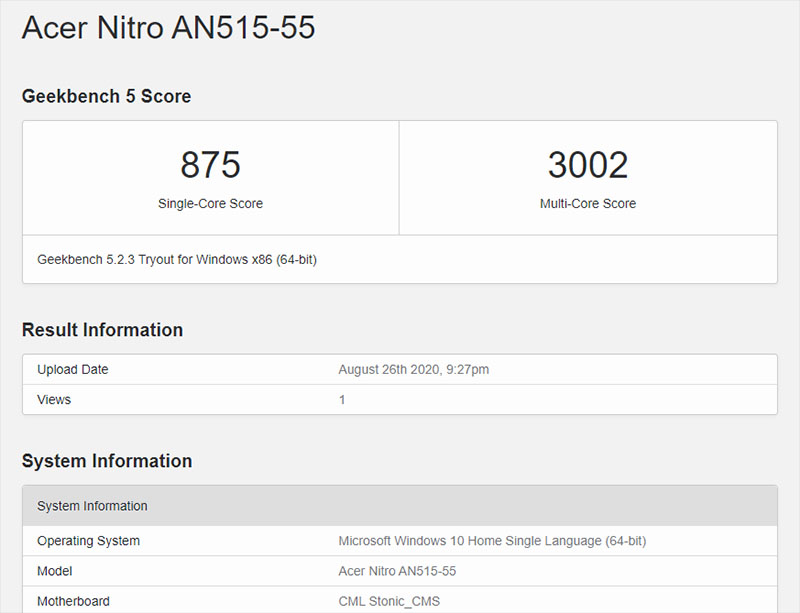 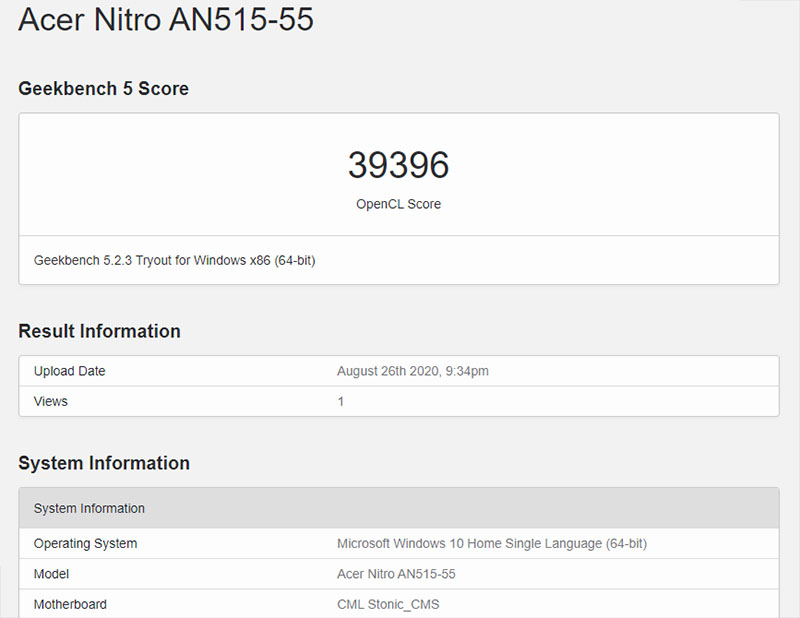 Measure the performance of Acer Nitro 5 with Geekbench 5.

In addition, Acer also does not forget to equip 512 GB M.2 PCle SSD for large space for game storage. If you think 512 GB is not enough, then here, Acer also supports M.2 PCle SSD slot and supports SATA HDD slot to increase the space to save documents and necessary information. I used Crystal Diskmark software to measure the read and write speed of the SSD and obtained the following results: 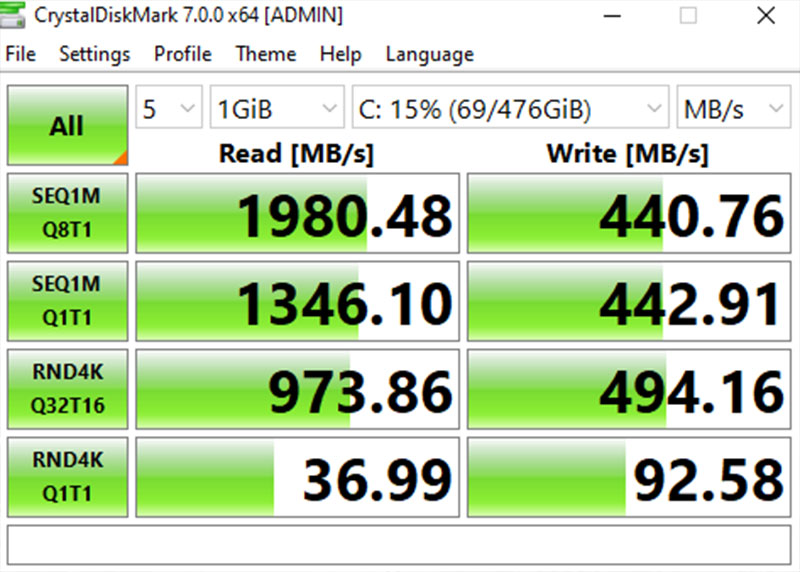 When it comes to sound, it must be recognized that the sound quality on the Acer Nitro 5 is not too good but still offers an ear-catching experience. With DTS (R) X: Ultra Audio technology, Acer Nitro 5 will deliver loud, clear sound, emitting multiple directions and not obscuring any sound area. 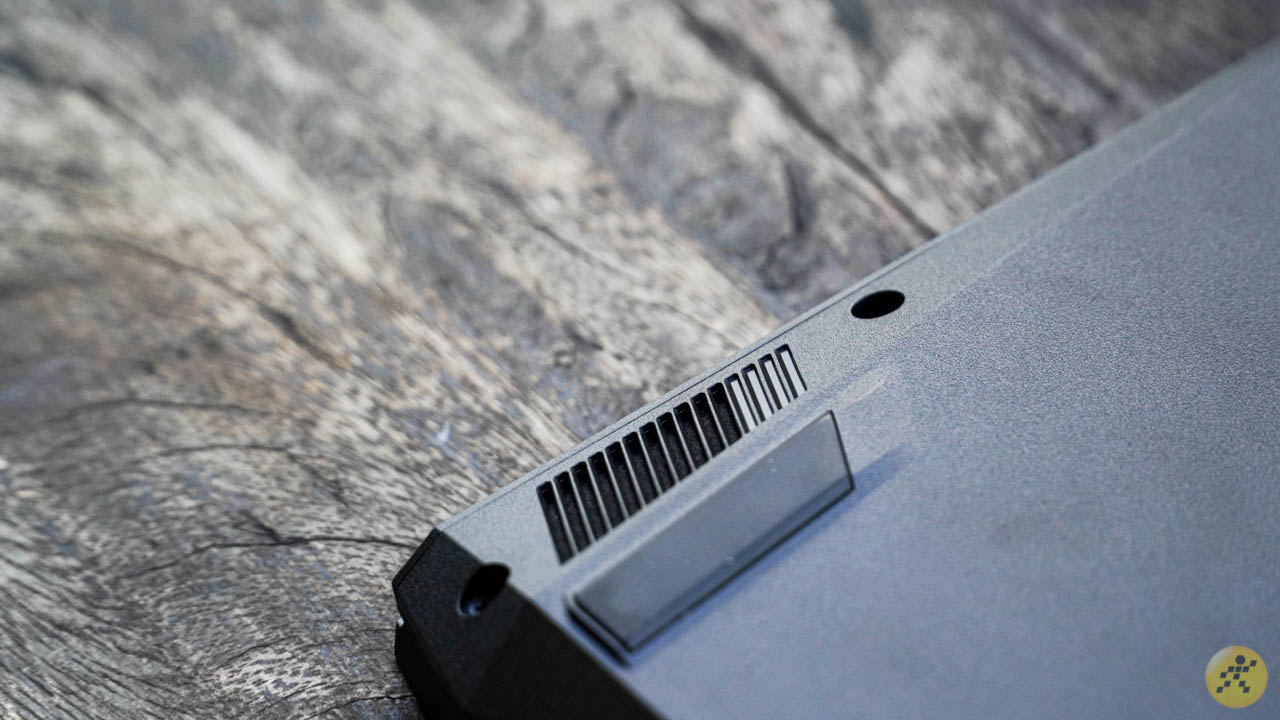 Speaker design on the Acer Nitro 5.

DTS: X Ultra technology gives gamers a competitive edge by adding precise sound sources in 3D environments compared to the player, reproducing almost realistic sound. From there, it makes it easy for the user to listen to locate opponents or identify other important environmental sounds.

Talking about the heat sink, I used the Acer Nitro 5 to design through Photoshop and used Lightroom, some Chrome tabs, the machine heated about 75 degrees C for more than 30 minutes. This is the normal heat level for a gaming laptop, so there are no surprises or worries. 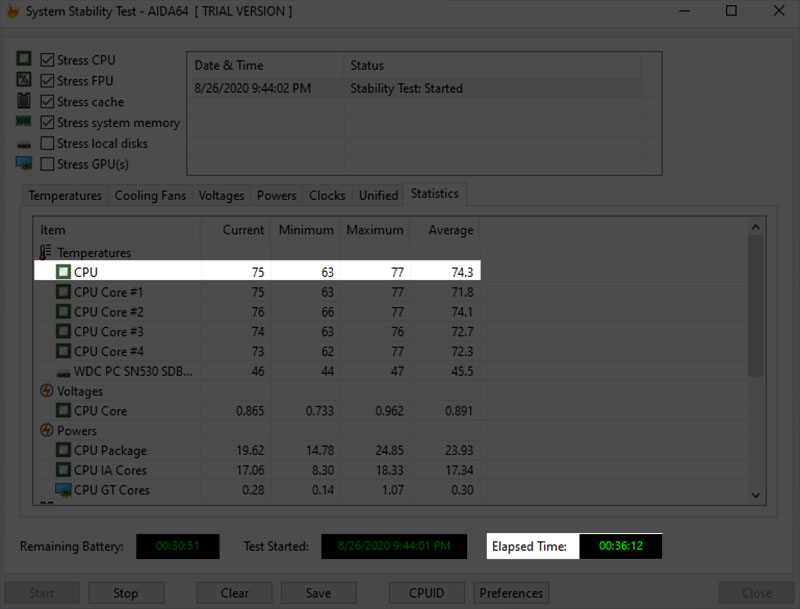 When I plugged the charger into the game to switch to Performance mode, the temperature started to heat up a lot and I measured the CPU to about 87 degrees Celsius. But don’t forget, we have Nitro Sense feature that allows you to adjust the fan. inside the machine and cool down the CPU and GPU for a more stable experience. 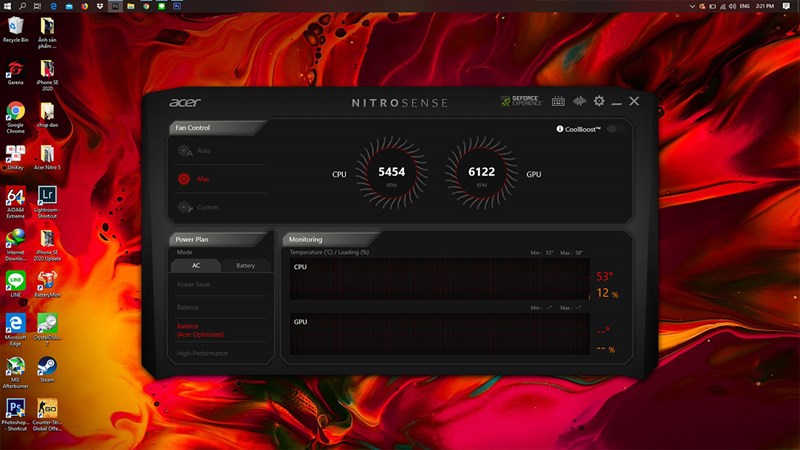 3. Overall unchanged, but still attractive of the Acer Nitro 5

Compared to the previous version, the new Acer Nitro 5 version still has no change in appearance although the internal configuration and the screen are upgraded. We will still have a rather aggressive design with the main color tone of black, lightly coordinated with red to add the strength and personality of a gaming laptop product line. 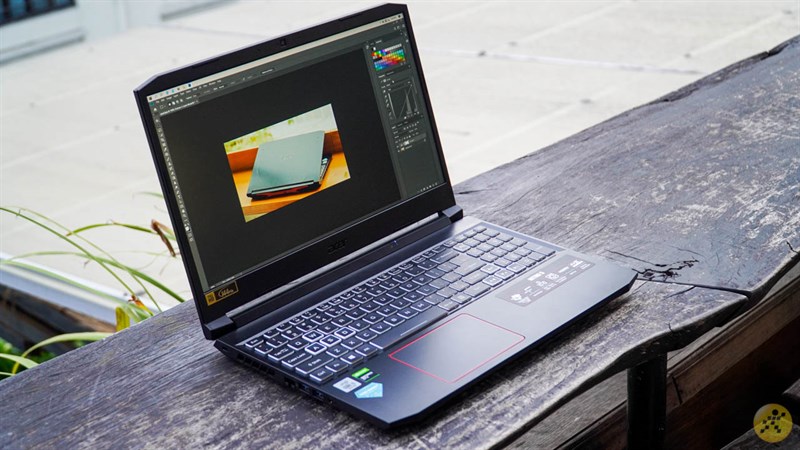 Overall design of the Acer Nitro 5.

The machine is made of plastic material, which not only makes it easy to carry the machine, but also significantly saves production costs and reduces product costs. I say that, but personally I still prefer metal. On the back Acer Nitro 5 still owns an unobtrusive design with two slight cuts on the sides and the Acer logo in the middle. 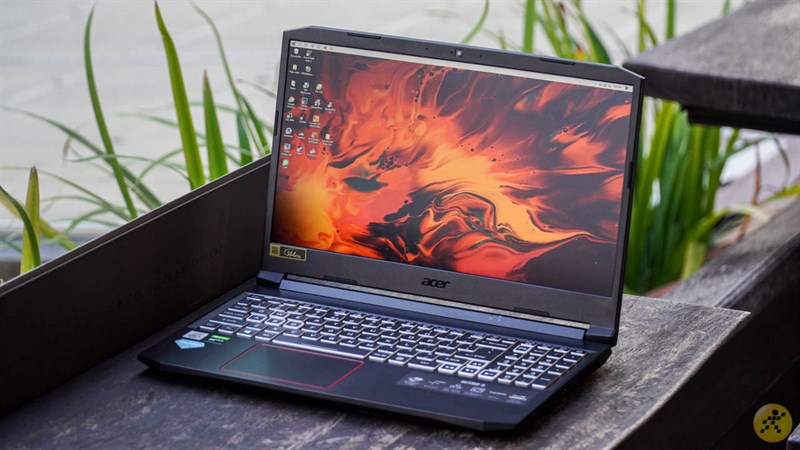 The machine is made of plastic material that makes it easy to carry around.

In terms of connectivity, Acer Nitro 5 is fully equipped with ports on the left side, the machine is equipped with a lock port, LAN port, 2 USB Type-A ports and 3.5mm audio jack. Meanwhile, the right edge has a USB Type-A, USB Type-C and HDMI port, the power port is located on the back edge of the keyboard. One more thing that is that the machine has up to four heat outlets, located on the left, right and rear edges of the laptop. 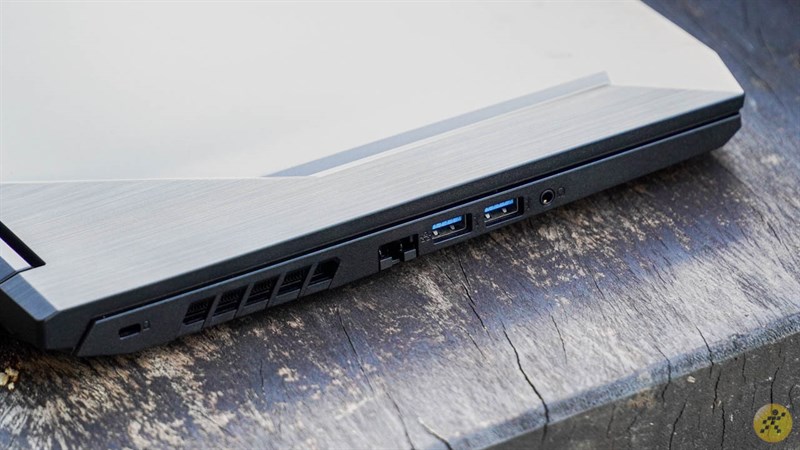 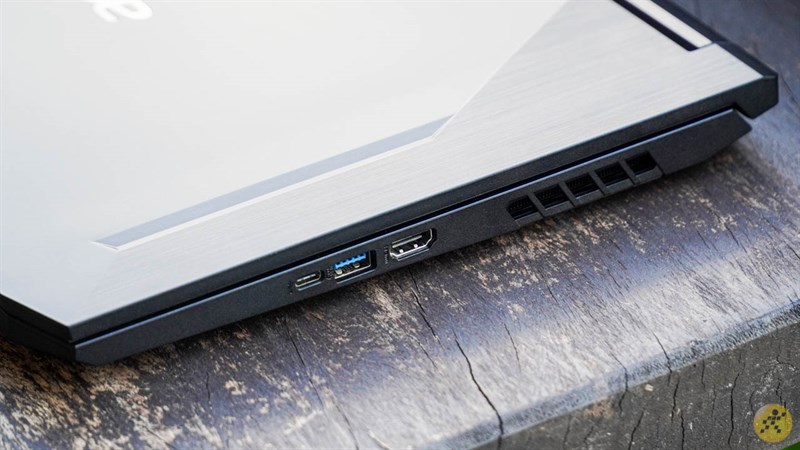 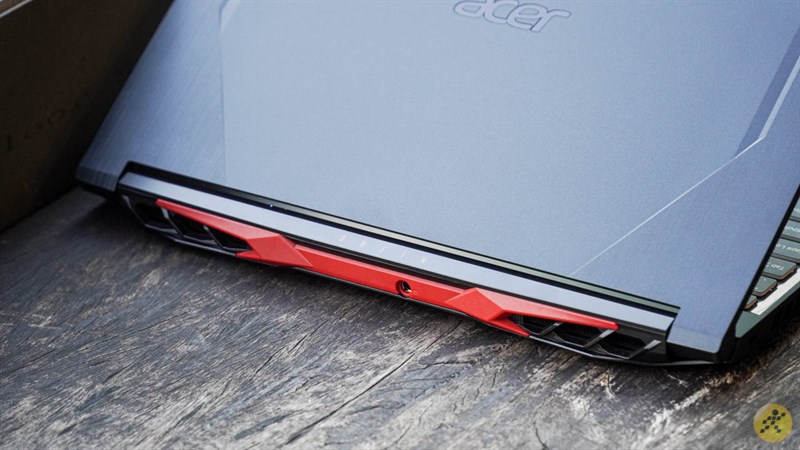 Speaking of the keyboard, I really like the unique RGB color changer and you can customize the color transition effect to your liking. Just seeing the large-sized keys, when typing with a high bounce to help you use for a long time without fatigue. However, the keys are a bit stiff and the key travel is a bit shallow. 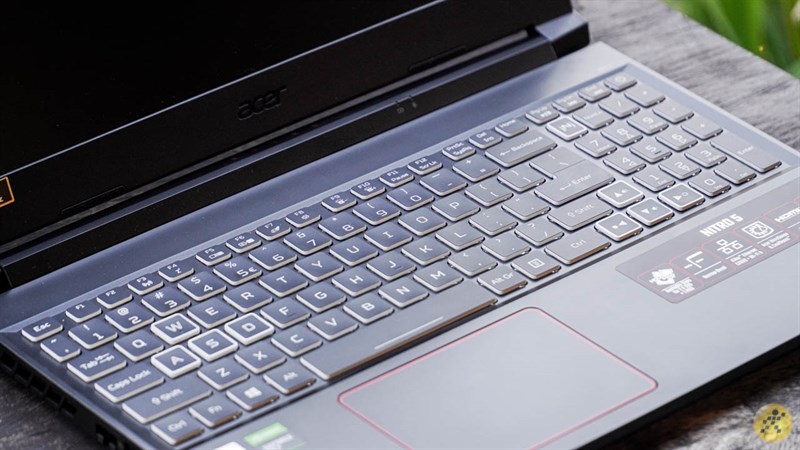 The touchpad is fine, very smooth and easy to use in everyday tasks. However, when playing the game, we should still use the removable mouse to facilitate movement. 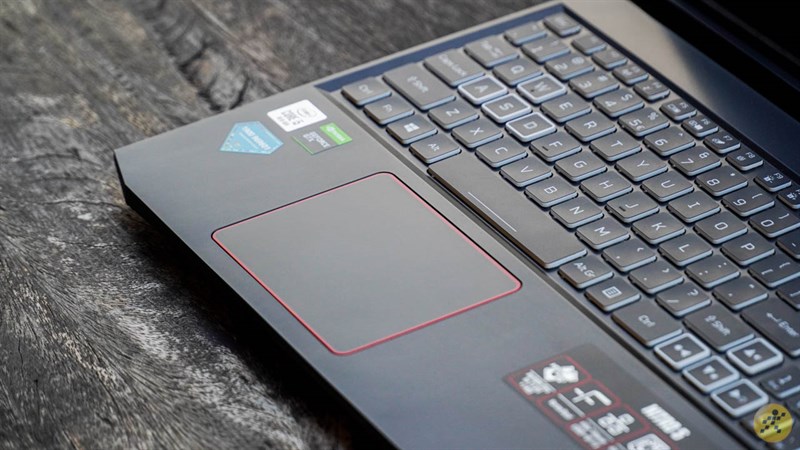 To measure battery life in the most objective way, I did not play games but only used 6 Chrome tabs, and also used Photoshop to edit photos. Results within about 45 minutes of measurement, BatteryMon measured the duration of the Acer Nitro 5 reached 3 hours 34 minutes. A number is neither too high nor too low, but enough for you to quickly handle the deadline. 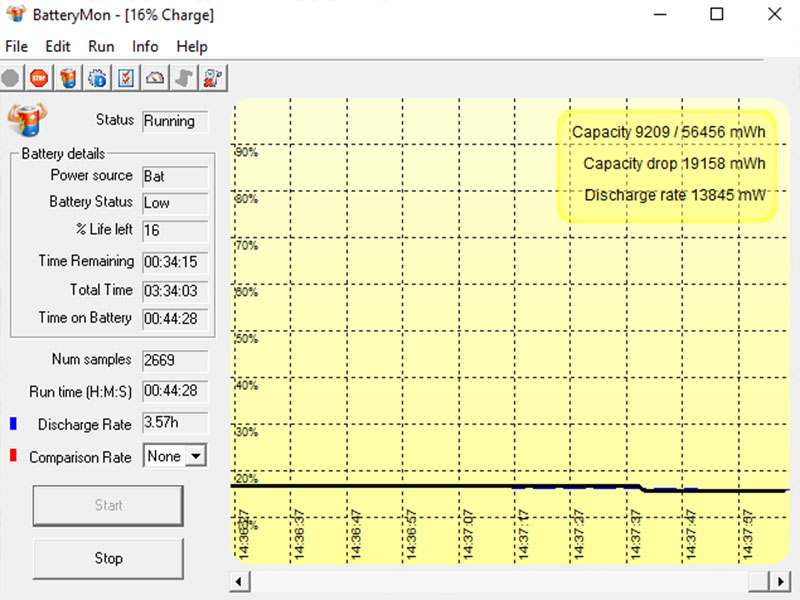 Measure the battery life of Acer Nitro 5 with BatteryMon

But still remember to bring the charger with the family because this is a gaming laptop, so plugging in the charger will make the device smoother. Oh well, it’s real if it’s running a deadline and running out of battery in the middle.

You may think that the display and graphics card improvements are quite meager, but for a gamer these are two very important factors that affect the experience. This new Acer Nitro 5 brings a whole new experience that is much smoother and more stable.

How do you see this new Acer Nitro 5? Leave your comments below and let me know. 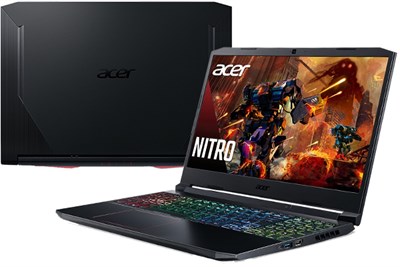 Post Views: 84 Dozens, hundreds of top-notch games are released by developers every year, resulting in the continuous improvement of high-configuration laptop and gaming laptop products to serve the maximum need to experience the virtual world. gamers’ brothers. Enjoy the game world in your own way Acer Nitro 5 AN515-43-R84R – Powerful gaming laptop at […]

Post Views: 74 Today, Quantrimang.com will mention an important command in Linux, ip. This command works on all Linux distributions, including Ubuntu, Arch Linux, Debian, Fedora, etc. Ip command Comeinand ip is a very powerful command that replaces the command ifconfig and is part of a network tool pack. The general syntax of the command […]

Honor 20SE revealed detailed configuration, will be released on 4/9 to

Post Views: 25 The Honor 20 series currently includes: Honor 20, 20 Pro, 20i and 20 Lite, but it is likely that this product line will be added to another smartphone, the Honor 20SE. Honor will have an event in China on September 4, where it is expected to launch several new versions of the […]