"A person who knows the blueness of the sky" review

Youth animated movie to send to "you" beyond 30s

Directed by Tatsuyuki Nagai, screenplay by Yuri Okada, and production by CloverWorks.
In what is called the Chichibu Trilogy
“We still don't know the name of the flower we saw that day,” “I want my heart to cry. To
It will be the third work that follows. 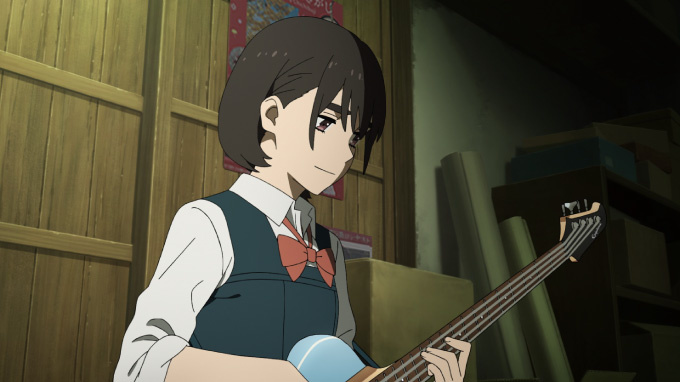 What I find and feel is the commitment to sound.
The recent Japanese anime movie was influenced by the hit of “Makoto Shinkai”
The background drawing is often drawn with great attention, and this work also reflects the scenery of Chichibu
Although it is drawn in detail, it is not a background description that is drawn as much as Makoto Shinkai's work

However, as soon as the movie started, the main character “Aoi”
Insert the noise-cancelling earphone into the electric base on the bridge
There are scenes that stir.
The rhythmic sound of the base and the figure of the girl who stirs it match strangely,
I'm drawn into the world of this work.

Music is one of the important elements in this work.
She lost her parents when she was young,
13 years have passed since my older sister was replaced by a parent.
When I was a kid, my sister's boyfriend formed a band, and as a result, she started bassing.

The past is drawn with the sound of the base.
The fact that her sister refused the "situation with her boyfriend" for her,
I am now the same age as my sister, but I am somewhere cramped,
I am planning to leave the city where I was born and raised for my sister and go to Tokyo.

A little "twisted" feeling peculiar to this age and the appearance of rebelling against a perfect sister
The character description of the middle of adolescence and the middle of youth unique to “Chichibu Trilogy”
The main character who feels the usual “likeness”.

The story begins when her sister's boyfriend appears 13 years ago in front of her. 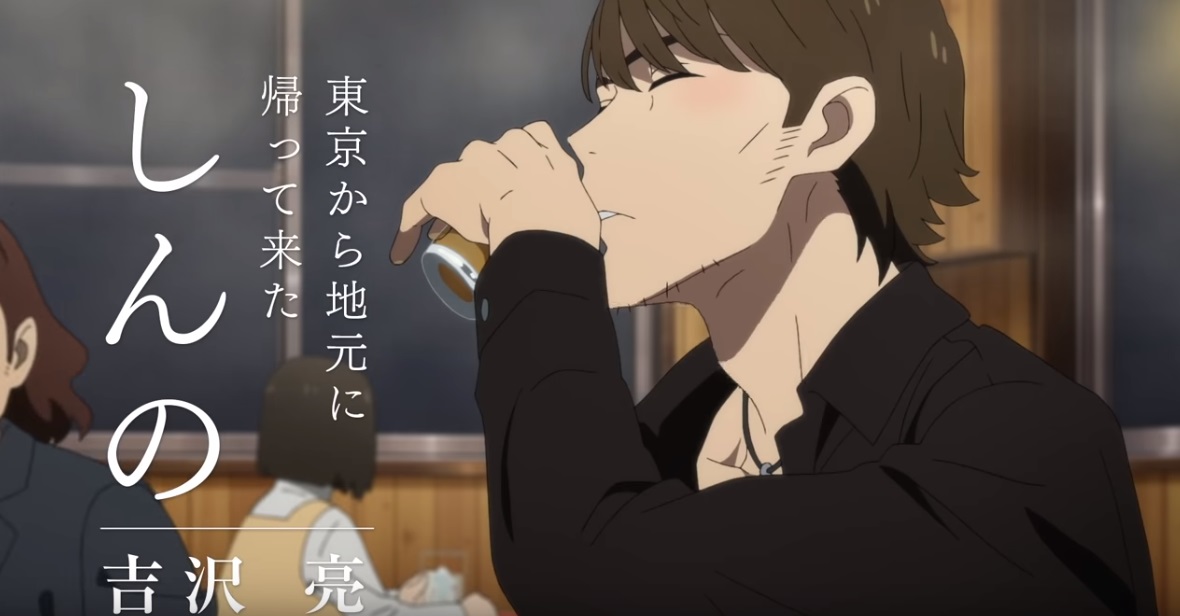 In a sense he is another hero.
13 years ago, he was about to go to the dream,
He was eager to come to pick up the sister of the main character who had a successful relationship with music in Tokyo.

“Shinno”, 13 years ago straight toward such a dream, became a spirit.
Appears before the hero. I do n’t know why I ’m here,
Suddenly, 13 years have passed for him.
The protagonist who was a child is about the same as me, but at first he was confused
I realize what I should do.

The current “Shinno”, 13 years later, will return to his hometown after 13 years.
But he is completely different from Shinno 13 years ago,
It ’s not kind, it ’s not sold as a musician,
It's a clean up as an enka singer backband.

Although it can be said that the dream was fulfilled,
I am not the future myself that I had imagined 13 years ago.
That's why I didn't go back to my hometown, but I was tempted.
After returning to my hometown as an enka singer's back band for the first time in 13 years,
I will reunite with my sister.

This is the path that many adults who have passed through the milestone “30” have passed.
Not all dreams come true, and it is rare for a dream to come true.
The figure of “Shinno” 13 years later is their own,
There must be many people who put themselves on his figure.

Two of the Chichibu trilogy works are for teens.
Teenager-specific character description and sweet and sour love pattern, youth depression,
It was a work that felt such a blue smell.

However, this work is different.
"We still don't know the name of the flower we saw that day"
At the time, teens and twenties watching this anime
It ’s not strange to be an Arasa.

That's why this third movie is not a simple youth movie
It is a work for adults who have passed “Youth”. 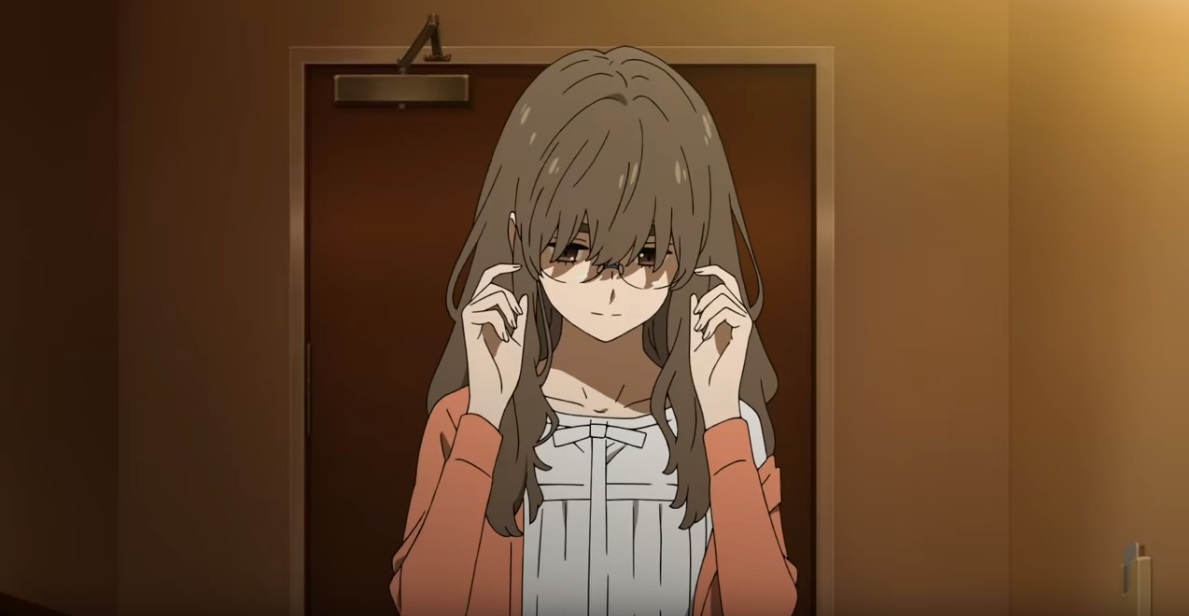 She who is also the sister of the hero is lovable.
She lost her parents 13 years ago and had a younger sister,
I had to give up my dream of going to Tokyo with my boyfriend.
Even after thirteen years, I can't forget my thoughts about Shinno.

“Shinno” appears in front of her for the first time in 13 years.
He doesn't have a fondness for him who has been thrilled in Tokyo.
As with 13 years ago, her appearance in contact with him was lovable,
Even if “Shinno” throws her away to return to the city
She does not accept it obediently.

Listen to his guitar and play in the same atmosphere as 13 years ago.
But after 13 years, the exquisite sense of distance between each other has become 30
Vivid and empathetic enough to understand their feelings painfully.
The tear spilling scene that I never showed in front of my sister for 13 years stimulated the lacrimal gland,
The hero is also affected by the tears.

It is a character description that was not a Chichibu trilogy until now.
It ’s not an explosion of emotions peculiar to youthful,
Expressions of emotions that can't be made because they are adults,
Delicate but is transmitted to the straight side.

What is a scriptwriter named Okada Yuri that can depict such a delicate character of an adult?
To be honest, I didn't even dream.
Her script was rather an expression of youth with extreme emotional expressions,
Her eighteenth, crying, crying, running, and hitting her emotions, is modest in this work. 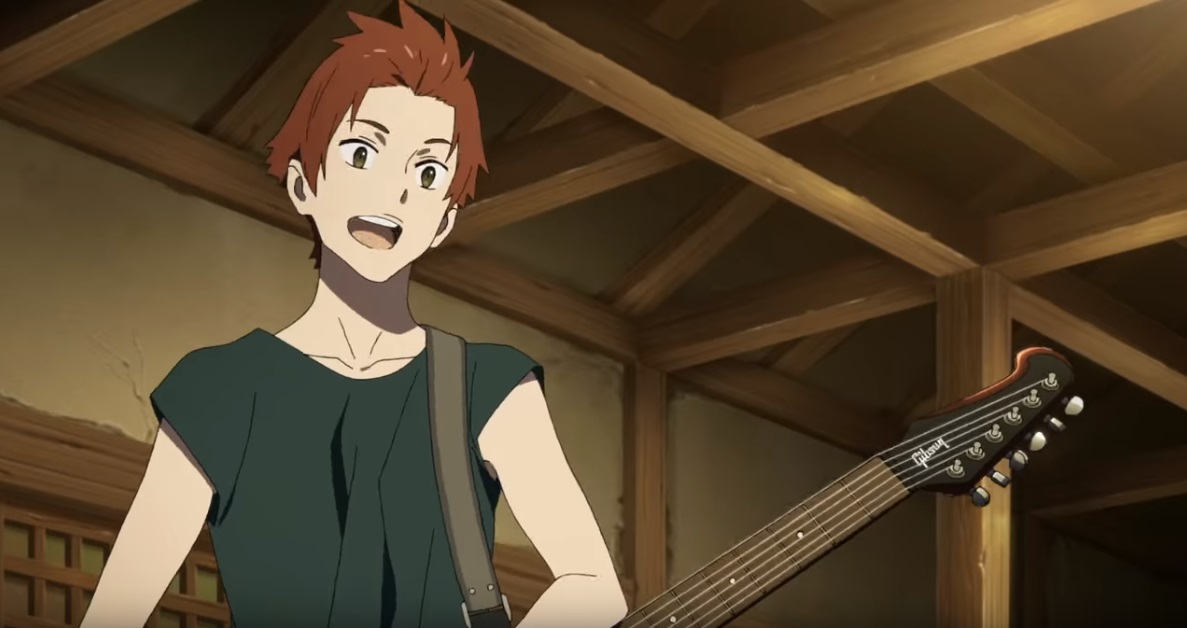 He is a virgin spirit, with the thought that his heroine sister refused to go to Tokyo 13 years ago.
It can be said that “Shinno” 13 years ago came to his hometown.
His words are straight, like an 18 year old high school student, full of dreams and full of hope.
I'm delighted that I realized my dream
Unlike the future I envisioned, I was frustrated with the “easy” appearance.

At the end, “Shinno” 13 years ago and “Shinno” now face each other.
The words I threw 13 years ago to myself after 13 years are terribly straight,
Because he is straight, he is stabbed in him 13 years later.
Thirteen years ago I said, “Let me want to be your future.”
It should be pierced not only by him but also by the viewer.

I thought that I was "stopped", but if I was 13 years ago,
I'm still "going forward".
The current “Shinno”, which had given up a lot of things
Move forward in your own words 13 years ago.

This work is also a story that he starts walking again. 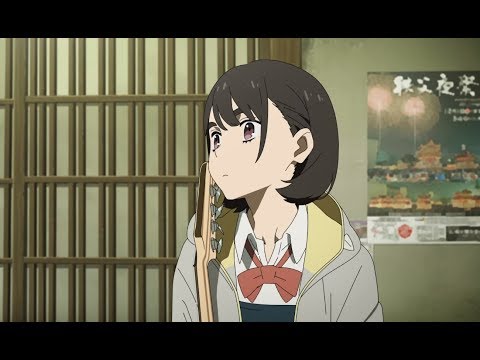 She thinks her sister is not used to happiness because of her.
Because of myself, I was working in a rural office like this, and I was separated from my lover.
If you are tied to various things because of yourself.
That's why my sister should go ahead by going to Tokyo.

However, “Shinno”, 13 years ago and now, appears before her.
The current Shinno is not as gentle as it used to be,
Many times he is hurt by his adult behavior.
On the other hand, “Shinno” 13 years ago throws her kind words to her.
It leads to her love.

But he is a living spirit. You can't go outside like a ground-bound spirit.
His idea is to connect him and his sister 13 years later,
So I think I will disappear.

If you tell his thoughts, if your sister and "Shinno" stick together
He disappears. There is no love for him who has decided to disappear.
Exploding my thoughts, sometimes throwing painful words to my sister,
Sometimes he tells his feelings straight.

But there is nothing to do.
She also thought she could n’t be happy because of her.
By knowing her feelings and knowing her difficulties,
The figure that I choose to give up at the end is inseparable.

Her last “scream”, “run” and “tears”
It is the figure of the hero suitable for closing the Chichibu trilogy.
By drawing a story of a 30's character at the same time,
It was a work that could be enjoyed by both adults and boys and girls. 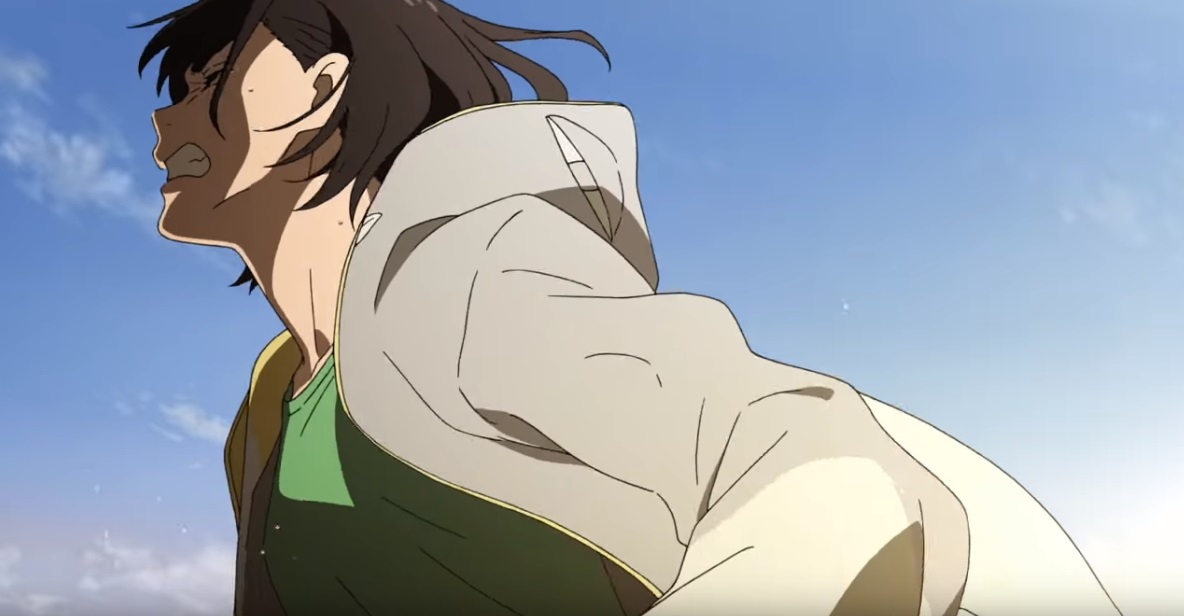 Teenagers who follow dreams, 30s who are starting to give up tiredly following dreams.
Nagai Ryuyuki and Okada Yuri, who have worked on many youth animations
The youth story and adult story are well organized as one piece,
That's because the 20s and teens who were watching "Anohana" became adults after 8 years.
The story is stinging.

The sub character is also attractive, and if it is a previous Chichibu three-part work
It wouldn't be strange to have more stuffiness, muddying, and fighting,
In this work, such giggles and muddy are modest.

Elementary school students who fall in love with the protagonist, gal classmates of the protagonist,
A character like Mikochin who was a classmate of her sister Toshin
Casually interfering with the story of the main character,
The relationship between characters is smiling.

If you only have one fault, it ’s the end of the scene.
To create a “flashy” scene as a movie, the spirit “Shinno”
Holding the hero, flying in the sky, falling from the sky
We are developing a flashy action scene that is not too sudden (bitter smile)

Certainly there are few parts that can be moved greatly as animation,
I understand that I wanted to make a movie excitement,
Even though the delicate character description and dialogue were wonderful,
Suddenly flying and bouncing is a very strange feeling,
Since there was a similar scene in Director Shinma Shinkai's "Weather Child"
I felt disproportionate to this work.

However, except for the scene, including the “happy ending” scene of the end roll
It ’s a great story,
It was a work suitable for the third part of the Chichibu Trilogy, which has depicted teenagers.
It's a youth animation that you should see in your 30s instead of your teens 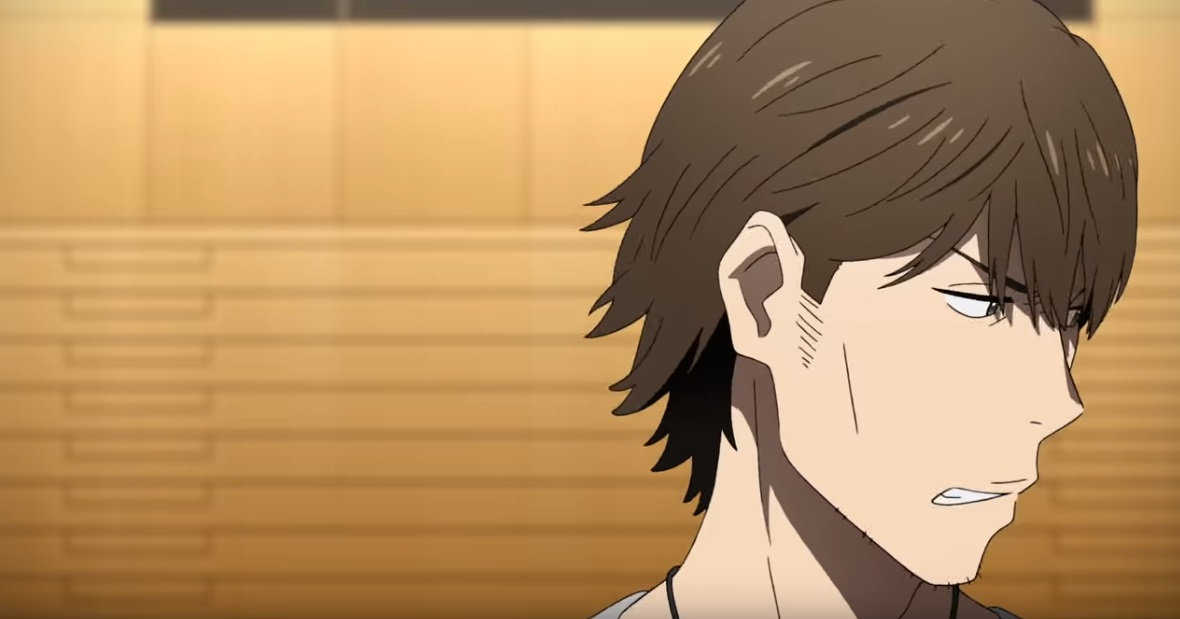 The scriptwriter, Mari Okada, was characterized by extreme emotional depiction in me.
A cute girl character distorts her face and quarrels, crying, screaming, and running.
By putting that extreme emotional description in the youth story
Inviting the viewer to empathize.

However, this work is delicate.
The depiction of the emotion of a character in his thirties is like the character of past Okada script
Do not scream or cry.
Although there is a little fight, it is natural rather than extreme emotional depiction.
Personally, it is the biggest surprise that Mr. Okada has worked on such a delicate script.

While depicting unstable emotions of teens, depict calm emotions of 30s.
This work may have been a story that can be done because of the current “Mari Okada”.
The Chichibu trilogy seems to be over, but I hope to see Okada Yuri World in the future.

In the history of algorithm evolution, why do games play an important role?

Psychedelic design: Bringing an artistic touch to the design