A lot of carbon fiber to reduce weight, the strongest BMW M5 CS in history will never meet in Taiwan!

Although it is not the strongest on the surface to have 635 horsepower in the car world, it is also a coffee. Therefore, the attraction of the BMW M5 CS may not be that it can accelerate from 0 to 100km/h in 3.0 seconds. What makes it stronger than other cars is that it can carry four people. The BMW M family is undoubtedly the most elite and powerful force. However, there are actually three more subdivided models, namely M, M Competition and M CS. In short, the CS model can be used as a racing car when the license plate is removed. It is the top model. Therefore, to conclude directly, Taiwan can’t even test the noise of the new M5 Competition, so the chance of seeing the M5 CS in Taiwan is even slimmer. Although the normal pipeline is very likely not to be seen, maybe there is such a possibility that a magical parallel importer can have it, or everyone can look at the introduction of the new car, and maybe get more modification inspiration for your M5. However, the biggest change of the new M5 CS is not 635 horsepower, but based on the M5 Competition, it uses more good materials to reduce weight. The twin-turbo 4.4 V8 engine has long been prestigious, so the engineers are still conservative when it is adjusted to 635 horses. It is not difficult to get close to 700 horsepower in the safe range, but engineers know that it is not meaningful to just pursue the horsepower value, and how to reduce the loss of power during transmission is the real effort. Therefore, the roof, hood, front and rear bumper diffuser, rearview mirror cover and even the engine cover are all made of reinforced carbon fiber CFRP. However, these alone make the M5 CS 70 kg lighter than the M5 Competition. After all, in the top models, the fight is no longer a few horsepower, but a few kilograms lighter than the opponent. BMW believes that the chassis of the M5 is already quite good, so the M5 CS only adjusts the number of suspension springs to withstand the lower body height. At the same time, Pirelli P Zero Corsa’s 20-inch super running tires of 275/35 in the front and 285/35 in the back are added, so you must wear good shoes to run fast. Other good looks include M version ceramic brake discs, red or gold paint calipers, and four-out sports exhaust pipes. At the same time, the previous daytime running lights were changed from the usual white in the past to a yellow hook shape, which is said to be inspired by GT events. 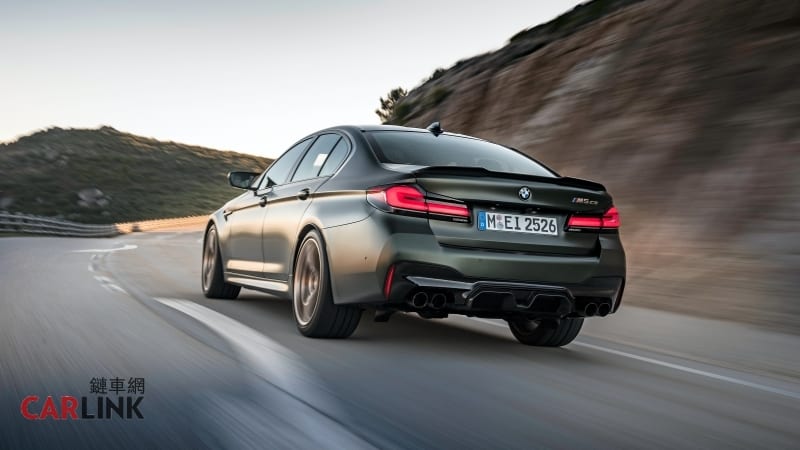 The four independent carbon-fiber tube seats are enough to fill the floor with glazing. In addition, there is a picture of the Newberlin track on the headrest. Some foreign media questioned that the general BMW will not easily put on the New Berlin image totem, so it is speculated that the M5 CS may have set the track record, but this has not been officially confirmed.