36 Krypton learned that the stranger social product “PicoPico” will complete two rounds of multi-million dollar financing in 2020. Investors include SIG, BAI and other US dollar funds, with Yuanshi Capital acting as the long-term exclusive financial advisor.

Launched in 2020, PicoPico is a social product for strangers in towns and cities. It is one of the social products of “Qingniu Pass”. Qingniu Outlet focuses on pan-culture and entertainment social products, positioning the target users of urban youth groups, and has formed a QQ applet social matrix with PicoPico Stranger App and Love Tonight as the mainstay.

Wang Xinmi, founder of Qingniu Pass, told 36Kr that urban youth generally refer to people aged 16-35 and living in third-, fourth- and fifth-tier cities. Compared with people in first- and second-tier cities, they have shorter working hours and longer entertainment hours. Strong consumption power is the main force of Internet entertainment consumption. The team found in the survey that urban youths are more lonely and eager to make friends. They are more active socially and are willing to pay higher disposable income for entertainment. They also expect to satisfy self-expression and make friends from social activities. , Emotional companionship and other needs. Therefore, urban youth groups need more organized products with content consumption scenarios. PicoPico can provide a community with a sense of intimacy for this demand.

In order to avoid the rapid consumption of passion under fast matching, PicoPico wants to guide users not only to participate in the “passion” and “heartbeat” scenes, but also to develop the relationship between “intimacy” and “identity”. With the concept of “family” as the core, PicoPico allows users to freely join the family based on interest keywords, forming a group starting with 15 people and gradually expanding in size. And set up an identity growth system for the family, users will be assigned specific identities and rights and responsibilities, after completion, the family influence will be enhanced. The establishment of a long-term family relationship complements the sense of intimacy and organizational belonging outside of passion, which is conducive to long-term retention. With the blessing of the family scene, PicoPico’s long-term retention can reach 50% of the following month, a slight decline.

At the same time, unlike traditional real-time matching, PicoPico uses “asynchronous voice question and answer matching” as a supplement to the one-to-one matching scheme. The characteristic love co-production function of the product looks very similar to the co-production video playback interface of Douyin. The user takes a seat as a virtual identity and selects channels such as “Want to hear you say sweet words to me”, “Want to get a good night”, “Know your personality” and other channels , The matching user and speech will appear on the right, and the scene looks like two people are in a co-production conversation, which is essentially an organized asynchronous conversation. In recommendation, PicoPico not only considers identity information such as geographic location and age, but also considers users’ online popularity, feedback rate and other indicators to make the one-to-one chat scene more exciting. Due to its interactive nature of content consumption and entertainment, it greatly increases the online duration of the product. Users can reach an average daily online duration of more than one hour on PicoPico. 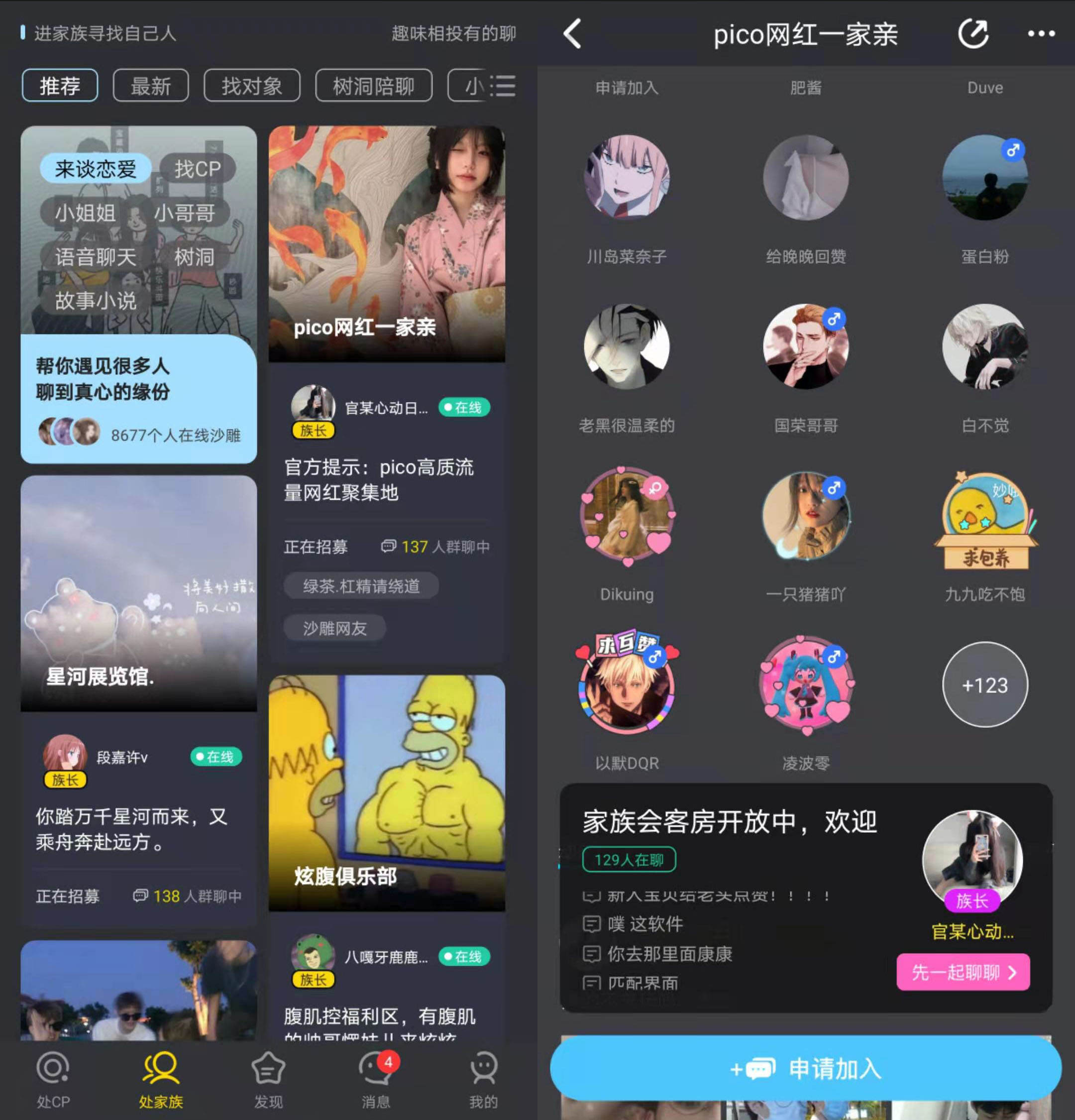 Founder Wang Xinmi said that the current community atmosphere of PicoPico is more “sand sculpture” and more earthy. Although it is difficult for this kind of culture to rise to the height of exquisiteness and literary art, it is actually a more warm and sincere social demand. PicoPico wants users to “see sincerity and life” itself. Behind this choice is the concept of the social camp: as the whole people go online, the era of socializing camps by pure functions has passed, and the era of dividing camps by crowd circles has begun.

It is reported that PicoPico currently has a DAU of approximately 300,000. Its revenue mainly comes from virtual props and virtual gifts, and its monthly income exceeds one million. The QQ applet matrix includes love tonight, CP at the same table, Sui Sui Nian and couple achievements, with DAU reaching 2 million. Founder Wang Xinmi said that the essence of social products is to serve the emotional needs of the crowd. In the future, the team will strengthen services on the basis of meeting the needs of the group for self-expression, emotion, and social interaction. The family club is the focus of PicoPico’s next development, and plans to develop a product form between podcasts and group rooms.

Qingniu’s export team is located in Beijing. The core members of the team are from Baidu, Meili Talk, Xiaomi, Didi, and Tencent. Founder and CEO Wang Xinmi used to work at Meili Talk and is a serial entrepreneur.