When playing games or calling, you will feel the vibration of your mobile phone. The current application scenario is mainly the “reminder function”, and the components used are also traditional eccentric rotor motors or fixed-frequency linear motors. But in the natural environment, people can distinguish the vibrations from different scenes such as human voices, footsteps, fireworks and firecrackers, aircraft engine sounds, engine roars, racing tires, blasting, gunshots, boxing, etc., because of real vibrations. The frequencies and patterns are extremely rich. If the vibration on the mobile phone can perfectly restore these vibrations, consumers will be able to feel different events from the mobile phone, and there will be many more immersive interactions in the game that are unimaginable.

Suoer Electronics is a startup company only established in February 2020. At the beginning of its establishment, it proposed a product solution for broadband motors. The performance advantages of Suoer Electronics’ broadband motors are concentrated in the following indicators: wider bandwidth, up to 300Hz, 100-400Hz range of vibration is above 0.4Grms, traditional fixed-frequency motors only 20Hz; lower resonance frequency, can dive to 120Hz , The current minimum of traditional fixed-frequency motors is 175Hz; the response is faster, BT/RT<20ms, traditional fixed-frequency motors @～100ms; at the same time, the sense of force is stronger, so it can simulate various vibration events in real environments. Such a performance advantage is the basis for the use of broadband motors to achieve more abundant application solutions.

The founder Cao Hongbin was previously in Apple’s Shanghai APO, responsible for the iPhone and Apple watch tactile product lines, and his core team is also from the Apple head supply chain. Cao Hongbin explained to reporters that Apple has started the large-scale use of fixed-frequency motors on Iphone and Watch to achieve haptic feedback. Its products are defined in Apple America, but the execution and production are in Apple China. In February 2020, I felt that the time was right, so I led the team to start a business and established Suowei Electronics, focusing on the next generation of haptic interaction technology-broadband motors, and intends to become a rookie at the next explosion of new demand in the 3C market. After more than half a year of product research and development and patent layout in 2020, by the end of 2020, the development of devices, modules and application solutions for 4 types of broadband motors has been completed, and more than 40 invention patents for broadband motors have been applied. 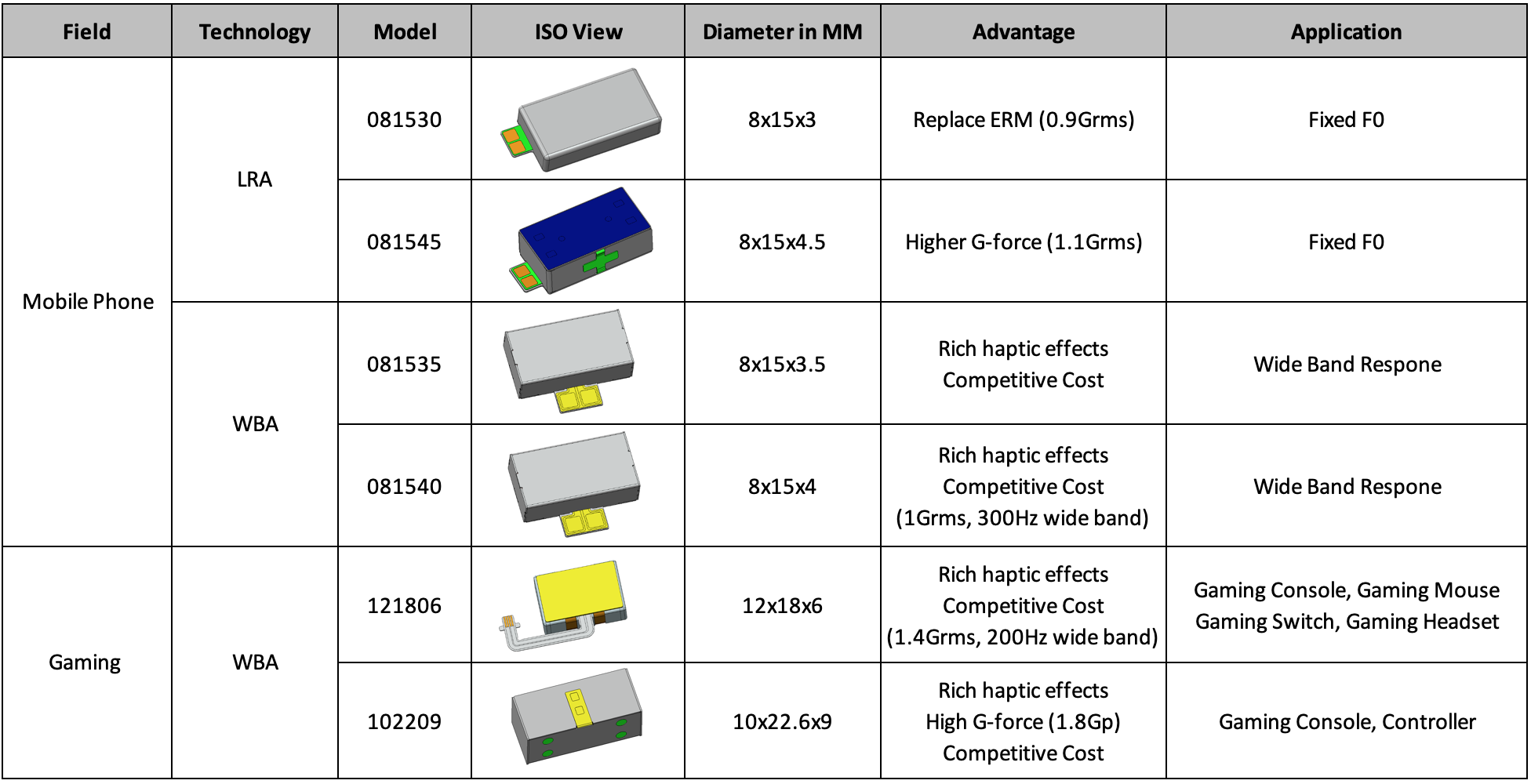 Suoer Electronics has successfully developed a series of broadband motors

Back to the market, are there any mobile phone brand manufacturers that have simulated various vibration events in real environments on mass-produced mobile phones? According to Cao Hongbin, “Suoer Electronics has already sent samples to top mobile phone brand manufacturers, and there will be a landing opportunity in 2021. With more and more entertainment applications and game content in the mobile phone industry, brand hardware manufacturers have realized Adding rich vibration feedback will be an explosive new demand for mobile phones and 3C consumer products in the future. At the same time, game content and digital content companies such as Tencent and Douyin are also accelerating the understanding and deployment of the new application field of haptic interaction, such as Tencent’s QQ Music already has a 4d vibration feel, and Peace Elite 2. Vibration feedback is also embedded. Cao Hongbin plans to start with the game content and first establish the high-end market’s awareness of the application of tactile feedback to the content. In 2021, Soner Electronics and In cooperation with NOLO, the world’s first broadband vibration motor has been successfully released in the VR controller device.

In addition to the broadband motor business, Cao Hongbin and his team used their unique design and understanding of the vibration system to simultaneously develop two other businesses: screen sound exciters and bone conduction headphones. The screen sound exciter technology cooperates with overseas manufacturers. The goal is to make all OLED screen mobile phones and 3C consumer products, so that the speaker does not need to be opened in the body, and the closed ID design of the system hardware is fully realized, and the first to use this technology It is Huawei’s P30Pro. Bone conduction headset is another new product developed by Suoer Electronics. The business will overlap with other bone conduction headset companies, and it will be a head-to-head competition in technology, products, and sales.

Suowei Electronics completed a 50 million Pre-A round of financing in May 2021. The investors are Xiangfeng Investment, Fengwu Capital, and Jiahe Intelligent.