36氪 Exclusive | ACC Super Jewelry, which is positioned as “Zara” in the jewelry industry, completed the first round of financing of nearly 100 million US dollars, led by Orchid Asia

ACC Super Jewelry was established in October 2020. It is a membership-based fast-fashion jewelry brand, mainly engaged in diversified and trendy jewelry such as jewelry, accessories and headwear. At present, it is mainly based on the offline jewelry collection store sales model. The store is sold in the form of a large area of ​​100-300 square meters. The product styles in the store are diverse, and the SKU is as high as more than 10,000.

There are currently more than 80 stores in operation, and 50 stores are planned to be added in May, and the number of stores in 2021 will reach 500. It will increase at an annual rate of more than 500 stores, and it is conservatively expected to reach 1,500 stores and achieve IPO by the end of 2023. In addition, ACC Super Jewelry also plans to officially launch its overseas market from the end of 2021.

Although it has not been established for a long time, in terms of the speed of opening stores, the number of stores currently operated by ACC Super Jewelry is 1.5 times that of the second place in the industry. During the May 13th holiday alone, 31 new stores were opened. According to Wang Jiexian, co-founder & COO of ACC Super Jewelry, the speed of opening stores and the number of stores in May and thereafter are at least twice that of the second place.

Positioning the “Zara” in the jewelry industry

From the perspective of the entire industry space, the jewelry industry has a market size of over 200 billion and maintains an annual growth rate of more than 15%. However, the scale of light luxury and luxury brands accounts for less than 10%, and the majority of them are still popular fashion accessories. At present, generation Z people in the jewelry industry have gradually become the mainstream consumer, accounting for nearly 50% of the jewelry consumers, and the rapid increase in the proportion is very obvious.

According to Wang Jiexian, the retail format of the entire jewelry industry has actually gone through several rounds of iterations. The first generation, represented by Oops, opened in the pedestrian street + small shop format, but the traffic of the pedestrian street behind it has declined, and the industry information system capacity cannot support its management radius. In addition, the joining model was immature and gradually transformed. But oops, there are nearly 3000-4000 stores during the peak period;

The second generation is represented by Ajidou, Lanno, etc., opened in a shopping mall + small shop format (20-40 square meters), with a higher magnification (above 6-8 magnification), and focuses on women over 30 years old. However, the style update speed is relatively slow, mainly based on the mode of group goods.

In fact, after studying the entire industry, players in the jewelry industry are still very scattered, and no brand player has the ability to differentiate products and brands, but the market has maintained a high rate + slow update state, and it has not really returned to creating for consumers. The origin of value actually reflects the immaturity of the industry and huge market dividends. And with reference to other mature industries such as clothing, there is still a lot of room for the overall operational efficiency and operation methods of the jewelry industry. 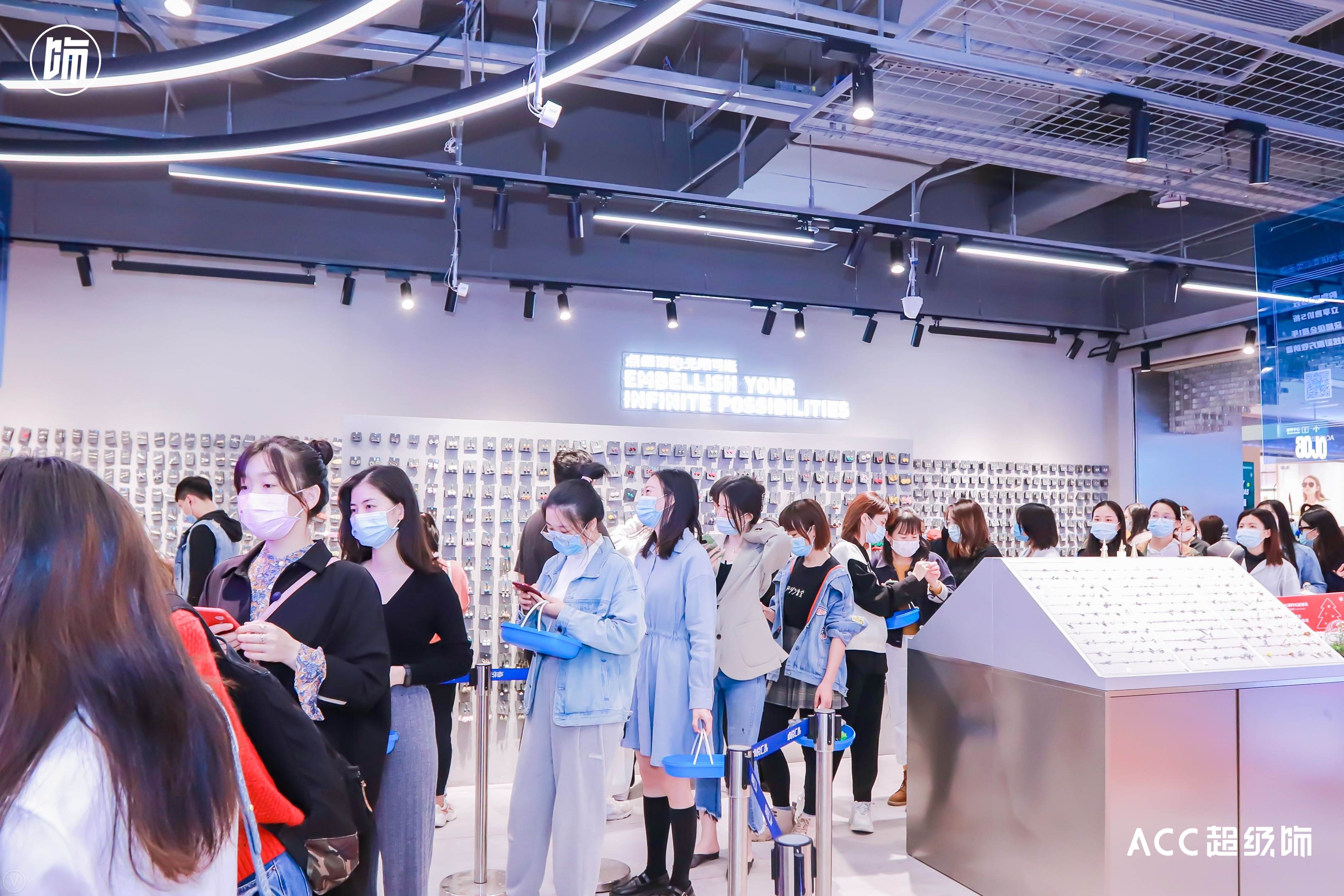 ACC focuses on positioning the young women of the Z generation and adopts fast fashion models to meet the high-frequency consumption needs and freshness of users. For the current 15-30-year-old new generation of women, they are extremely pursuing fashion personality. Every day’s accessories have to be changed with different outfits, and they are also easily addictive.

According to user research conducted internally by ACC, 74% of the population has a consumer demand for jewelry more than once a month, and this demand is growing rapidly at a rate of 25% every year. The reaction is that under the new consumer groups, the logic of the industry has begun to change. For young women, accessories have begun to become consumables.

“The consumer demand in this market is great, but the market is immature at this stage. In the past, this part of the consumer market has been ignored. The market dividend is relatively large but the competition is not fierce, so most players live comfortably and subvert Sexual players and models have never appeared. We hope to break it from the outside and become a global head accessory brand that continues to create value for consumers. It is now just in this stage of the industry.” Luo Huide said to 36 krypton.

Why is ACC Super Jewelry possibly becoming the “Zara” in the jewelry industry? The first core competency is the ability to open stores quickly. Behind the ability to quickly open stores is the empowerment of the group company. Based on the thousands of home furnishing businesses in the world, the group company has brought the global franchise system and other store resources to ACC Super Jewelry.

The second capability is system and data capability. There are about 300 technical teams behind ACC, and they already have mature top-level design, optimization, and process management capabilities for the entire retail system. To ensure that ACC super decoration can quickly optimize the system architecture according to the business structure iteration direction, provide the most efficient support for the business, and realize the fast fashion model driven by the system and data.

The third capability is supply chain management capability. The ACC super decoration team has 17 years of experience in product development and supply chain management. It has 6 factories and production lines, a production base of nearly 150,000 square meters, and a team of 3000-4000 workers. It has been a customer of Xiaomi, Costco, MINISO, Disney, etc. Core supplier. Have sufficient experience in design, production, manufacturing, cost control, quality control, etc. And the upstream of the jewelry industry is still very traditional, and the industrial efficiency also has a lot of room for pressure and integration. This is the advantage of the team, and it is also another core value besides orders that ACC super jewelry will bring to the upstream industry in the future.

The fourth is organizational ability. ACC Super Jewelry attaches great importance to talent construction and actively taps the industry’s top talents. There are nearly 10 photosynthetic headhunting companies. The team has always emphasized the wolf nature of the business, requiring that new business formats must use new methods, fast closed loops, and iteratives in order to maximize efficiency, produce innovations and continuous breakthroughs.

“This category is very profitable and has a lot of space. From the perspective of competition, the early stage is focused on resources, speed, and capital capabilities. It belongs to an industry where the stronger becomes stronger and the head effect is very obvious. But it is also a relatively complex category. The end result of the industry is to return to the overall operational efficiency, so as to continue to create value for consumers.” Wang Jiexian believes in analysis.

Where is the ACC super decoration, this shop is generally the best in the entire shopping center. The core reason is that this category is very attractive and suitable for shopping, has a strong value of attracting and stopping traffic, and has a high conversion rate.

If you disassemble the ACC super decoration single store model, you can find that its gross profit margin can be stabilized at more than 60%. Take a first-tier city as an example, a store of about 150 square meters, after deducting rent, labor, amortization and other expenses, the single store is net The profit rate can reach 30%-35%.

The absolute value is very good, but the ACC team feels that from the perspective of internal development trends, there is still a lot of room for this data to continue to improve. The core lies in the very fast response to business iterations under the support of organizational capabilities, and thinking about the direction of the industry. It is clear enough and has made a lot of forward-looking layouts, including brands, systems, talents, products, etc. These efficiencies have gradually been reflected.

Brand building is also one of the key directions of ACC Super Jewelry after this round of financing. At present, ACC Super Jewelry has signed an internationally renowned Gen Z actress, which is expected to be officially announced in June. A series of actions around the brand, including self-developed and designed celebrity models, IP models, and co-branded models, will also be gradually unveiled. At the same time, ACC Super Jewelry adopted the virtual membership model when it was established to realize the precipitation of each user’s assets. Relying on algorithms and system capabilities, it makes it possible to deliver continuous and personalized consumer services and brand values, and to achieve greater brand tension. Extend the space.

As the lead investor of this round, Wang Jue, director of Orchid Asia Investment Group, said: “The consumer demand for fashionable accessories with a price of one hundred yuan has gradually become the mainstream of the new generation. ACC super decorations are similar to Zara’s formed based on the traffic pool of the shopping mall.” The experiential consumption format of big stores + fast fashion is a distribution channel that we believe to be highly efficient to match consumer needs. At the same time, we have traveled from Shanghai to Jiangsu, Zhejiang and South China jewelry industry belts for investigations. +Fashion fast reaction” model has formed support. It is expected that ACC Super Jewelry can centralize offline jewelry consumption flow and efficiently distribute, deliver high-quality products in the industry to more consumers, and improve consumers with efficiency and innovation The jewelry shopping experience. We also hope that the offline jewelry traffic pool concentrated by ACC Super Jewelry will have the opportunity to become the soil for the growth of niche jewelry brands in the future.”

Regarding this round of financing, Cheng Tian, ​​a partner of Shunwei Capital, said: “At present, benefiting from factors such as the generational replacement of generation Z consumer groups and the maturity of upstream supply chains, the emerging jewelry market is beginning to show its huge potential. ACC Super is decorated with a membership system. Based on the characteristics of large stores, many products, low prices, and detailed services, it has gradually grown into a leading brand in the industry. Shunwei Capital is one of the earliest core supporters of ACC Super Jewelry. We look forward to seeing ACC Super Jewelry continue to maintain in the future. The upward trend will gradually develop into a world-class brand!”

Elon Musk sold out the villa, is renting in a 37 m2 house