Two weeks after the launch of the new 2021 CBR600RR self-promotional video, it was finally officially released on the official website of HONDA in Japan today! The price is 1.6 million yen including tax. Compared with the previous generation, the sixth-generation CBR600RR is not only lighter and faster, but also more abundant in electronic control systems. CBR600RR returns to the 600-level battlefield. The ram intake air passage is precisely processed to improve the suction efficiency. 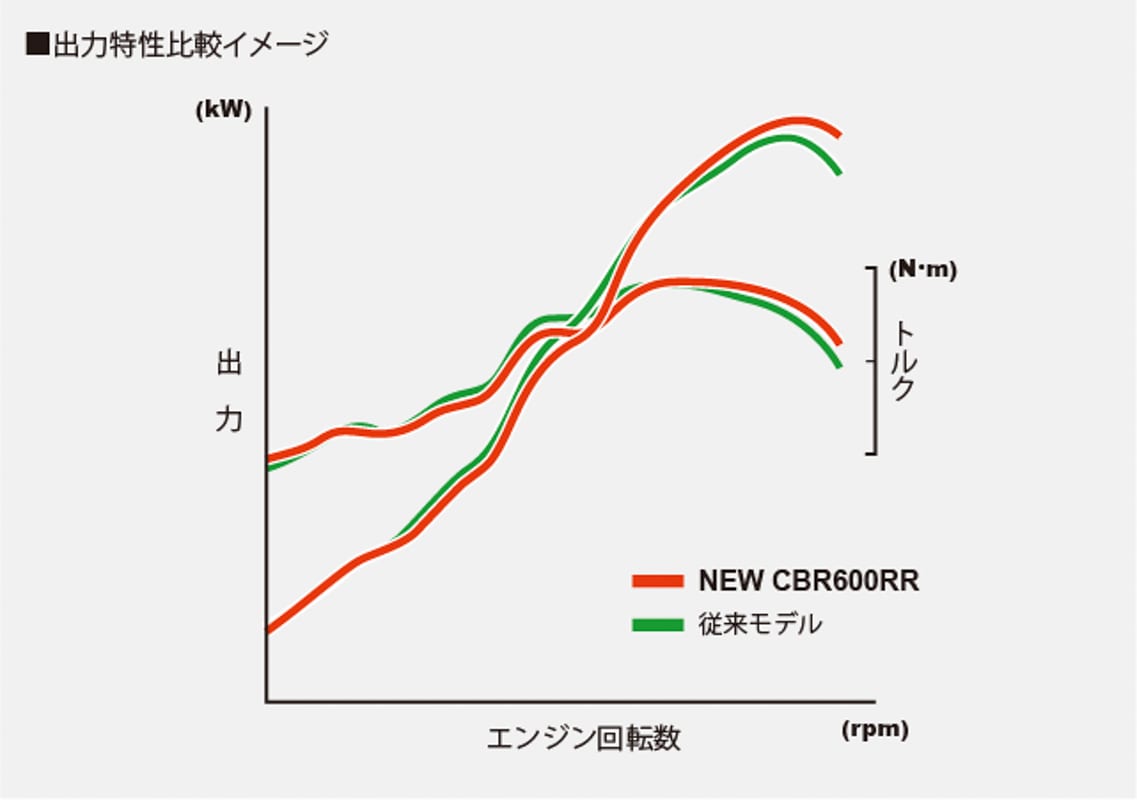 The peak torque of horsepower extends back 500rpm.

To increase power, electronic control must naturally follow up. HONDA has added BOSCH 5-axis IMU inertial measurement unit to CBR600RR, which can accurately determine the posture and position of the human body and calculate the dynamic angle of the body at a rate of 100 times per second. Through the body posture The information is combined with ABS and HSTC torque control, which can accurately assist the rider in various situations with electronic control. There are no shortage of common power modes and corner ABS. There are three modes and two customizations, whether you want Full power off the track, or slow riding on rainy roads can be competent, and the brand-new TFT instrument, with an airplane-like button menu, is gradually in line with the mainstream of the market. The new TFT instrument is rich in information. The three built-in power modes have different settings on the electronic control. In the fairing part, the CBR600RR with a small fixed wind wing is used to reduce the drag coefficient to 0.555. The riding position is also reduced by 10mm because of the top surface of the fuel tank. The rider can even retract into the fairing. The side and rear shape of the car have also been modified. In order to provide better maneuverability when cornering; the headlights are replaced with lightweight LEDs, with dual lights outside, near, and inside, and the ram air inlet in the middle is retained. The frame part is the same as the previous generation. The front fork stroke is 15mm longer, and the asymmetrical rear rocker arm is 0.15kg less; the slip-off is also equipped, which reduces the clutch load by 32%, and the stop-and-go left hand is more labor-saving, but it is a pity Because of this price, the quick arrangement is not included as standard. Other accessories such as the HISS anti-theft and ESS emergency flashing that are often found in Honda cars are all allocated to you, not only off the track, but also very convenient for daily use. The drag coefficient is also reduced due to the design of the fairing. It is not the three wings like CBR1000RR-R, only one small wing on the left and right is integrated with the rectifier. It can provide downforce at high speeds while also achieving the function of steering to stabilize the body. The lamps use LEDs, and the headlights are designed with dual lamps outside, near and inside.

The frame is the same as the previous generation. The fork stroke has been increased by 15mm. The swing arm is slightly reduced by 0.15kg compared to the previous generation. Equipped with a sliding clutch to facilitate clutch operation. The ESS emergency flashing that HONDA has in many product lines is also equipped. However, with the gradual difficulty of vehicle inspection and the problem of declining sales, the visibility of CBR600RR has gradually decreased. In the face of the technological advancement of rivals YZF-R6 and ZX-6R, HONDA has also decided to face it head-on and launch the new sixth-generation CBR600RR! But in terms of “evolution”, it is indeed a little insufficient in terms of power and physique, which can not help but disappoint the car fans. And this kind of pricing does not have the fast row, and only replaces the new fairing and electronic control introduction. In terms of track car use, ECU or electronic control upgrades, aerodynamic kits, or fairings are all required changes, and the changes are relatively modest.

Range of changes in the past dynasties

It debuted in February 2003. As the successor to the CBR600F4i, the original and contemporary MotoGP factory car RC211V is not only similar in appearance, but also uses many of the same race technology as the factory car and the first decentralized commercial car. For example, Unit Pro-Link multi-link rear shock absorbers and PGM-DSFI injection system, the frame uses precision casting technology to reduce the thickness of the frame tube wall while maintaining strength, laying an excellent foundation for the future 600RR. Time advances to 2005. The second-generation CBR600RR was replaced with a fully adjustable inverted fork, four-radiation calipers, an aluminum alloy frame and a rocker arm. The engine and exhaust system are used to reduce weight. The wet weight is reduced by 10kg and the control response is more sensitive. .

In June 2006, Honda made a major facelift for the 600RR, launching a sharper third-generation model, committed to creating a smaller model with greater horsepower, the engine and the previous generation share the structure, and the introduction of Ram-Air intake ram , The power is increased to 120 horses, but the size is more compact, the size of the vehicle itself is also smaller, the wheelbase has been reduced by 22mm, and the weight is lighter by 10 kg, creating a flexible killer in the middle displacement class. However, the evolution has not stopped. Through internal adjustments of the 2009-style fourth-generation 600RR, HONDA claims that the torque between 8,000 and 12,000 rpm has increased by 3.5%, and the fairing has also been redesigned slightly to reduce noise and improve stability, and once again enhance the 600RR competition force.

The generation of CBR600RR most familiar to Taiwanese riders is the fifth-generation model after 2013. It has new 12-spoke wheels, retuned ECU and more mature technology of ram air intake, combined with SHOWA BPF front fork to strengthen the suspension. which performed.