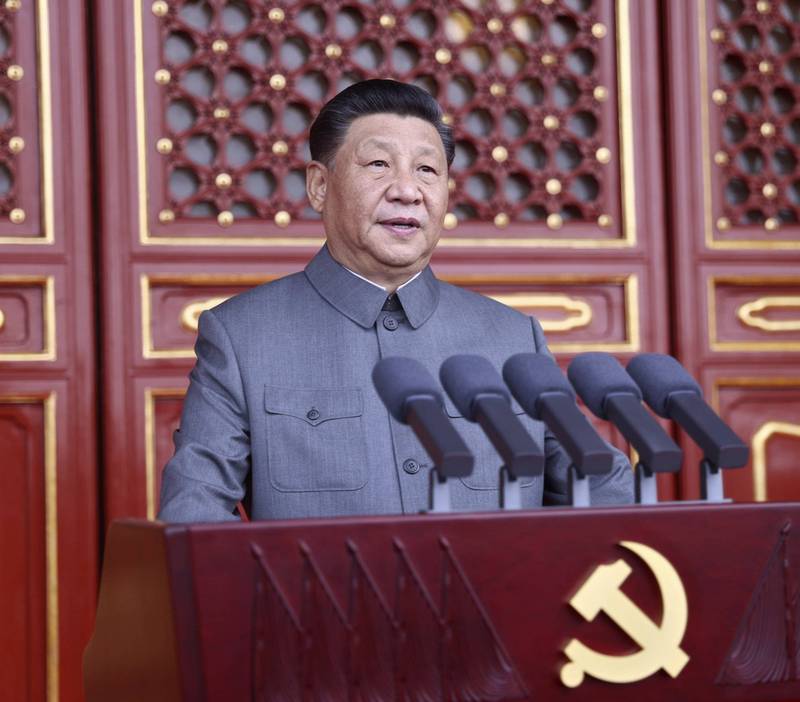 On the evening of the 6th, General Secretary of the Communist Party of China Xi Jinping (see picture) met with leaders of political parties in many countries. In his speech, he stated that “There are many ways to achieve democracy, and it is impossible to be the same.” However, he accidentally repeated the speech that he had read before at the end. Pause and ask “Am I finished?” The picture shows Xi Jinping’s speech at Tiananmen Gate during the Centennial Party Celebration of the Communist Party of China on July 1. (Associated Press information photo)

[Central News Agency]The General Secretary of the Communist Party of China, Xi Jinping, said during a video summit with leaders of various political parties tonight, “There are many ways to achieve democracy, and it is impossible to be the same.” He also said that international rules should be rules recognized by all countries in the world and should not be formulated by a few people.

The CCP will host the “CPC and World Party Leaders Summit” in Beijing tonight, which is also the first home diplomatic event for the CCP’s centennial anniversary. However, when Xi Jinping approached the end of his speech, he accidentally repeated the speech he had read before, and paused for a while to ask “Is this done?” This became an unexpected episode of the meeting.

According to the broadcast of China Central Television, Xi Jinping pointed out in his speech that the world’s political parties should shoulder the responsibilities of leading the way, building consensus, promoting development, strengthening cooperation, and improving governance, grasp and shape the common future of mankind, adhere to and promote the common values ​​of all mankind, and let The results of development will benefit the people of all countries more and more equitably, and we will work together to cope with global risks and challenges, and continuously enhance our ability to seek happiness for the people.

He claimed, “Democracy is also the right of the people of all countries, not the patent of a few countries. There are many ways to achieve democracy, and it is impossible to be the same. If a country is democratic or not, it must be judged by the people of this country, not by a few people. Forget it”.

Xi Jinping also said that the CCP insists on proceeding from reality in everything and leads the Chinese people to explore the path of socialism with Chinese characteristics. “History and practice have and will further prove that this road is not only right and feasible, but it will also be able to go steadily and well.”

He further declared that there is no fixed model for the path of modernization. “The best that suits you is the best. You can’t cut your feet and fit your feet. Every country’s efforts to independently explore a path to modernization that suits its own national conditions should be respected.”

Then, Xi Jinping reiterated the “Belt and Road” initiative, environmental protection goals, and global anti-epidemic cooperation, and emphasized that the CCP will actively promote the improvement of global governance and “make new contributions to the common challenges of human society.”

Xi Jinping also said that all political parties in the world should “jointly oppose all kinds of actions that practice unilateralism in the name of multilateralism, and jointly oppose hegemonism and power politics.”

This video conference was the CCP’s first home diplomatic event after the 100th anniversary of the founding of the party on July 1, but it was an episode.

Comparing the official TV broadcast and the written transcript, when Xi Jinping was nearing the end of his speech, he suddenly repeated the speech that he had read before, looked down the manuscript several times, and asked in a low voice, “Have I finished?” After a period of silence, he jumped back to the closing paragraph to resume his speech and make a conclusion.