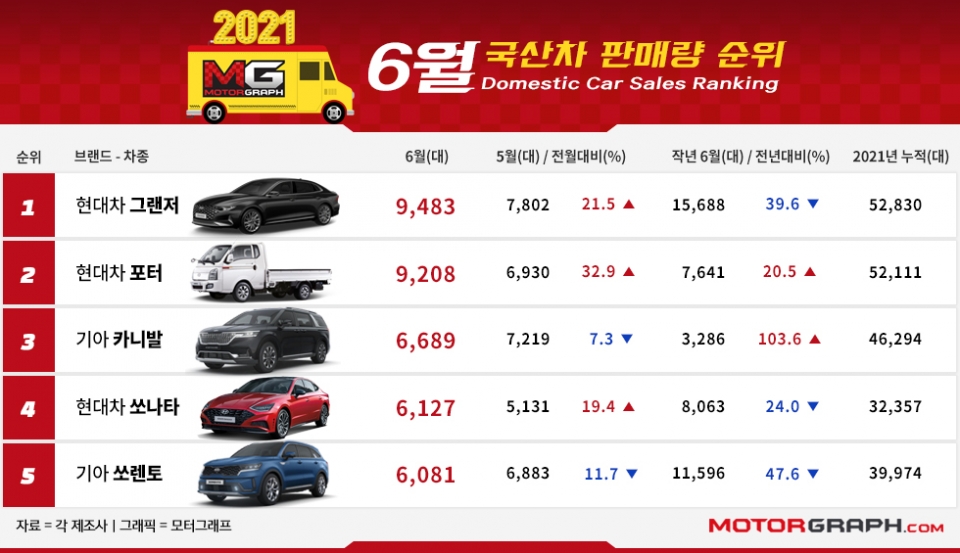 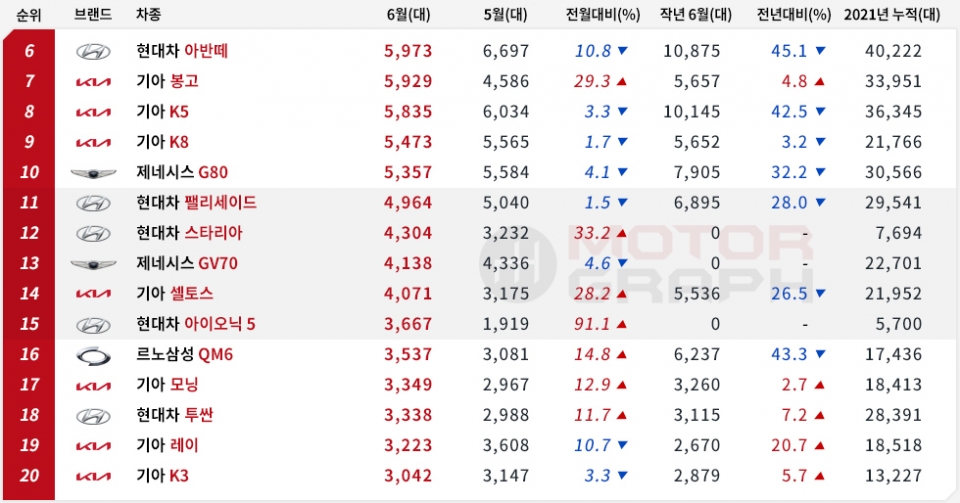 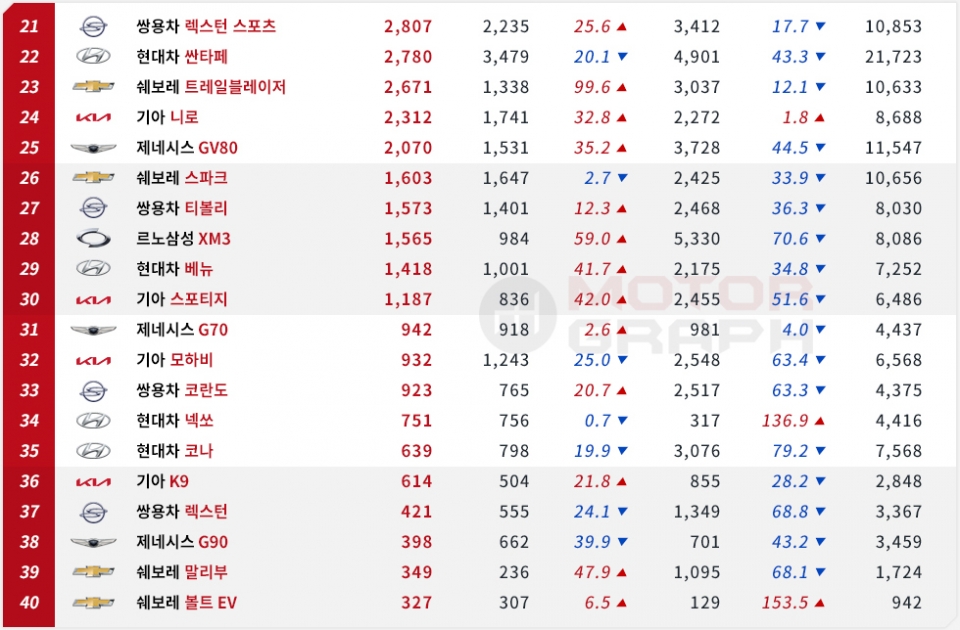 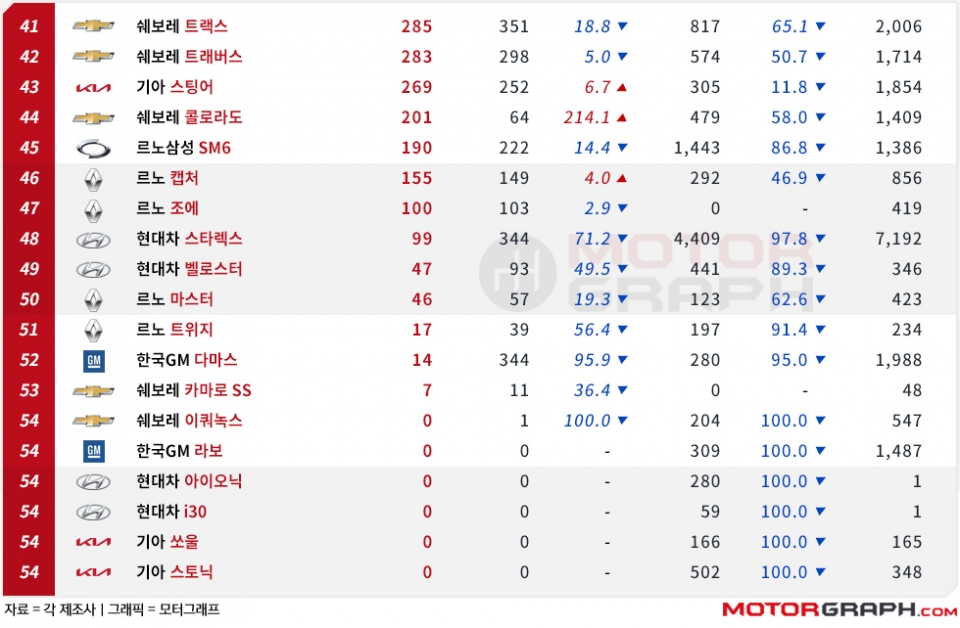 In June, the domestic automobile industry sold 134,761 units, down 1.7% from the previous year (137,130 units). Although the global shortage of semiconductors for automobiles is prolonged, it showed an increase of 8.6% compared to May, thanks to a recovery in consumer sentiment following an increase in the number of vaccinations against COVID-19. 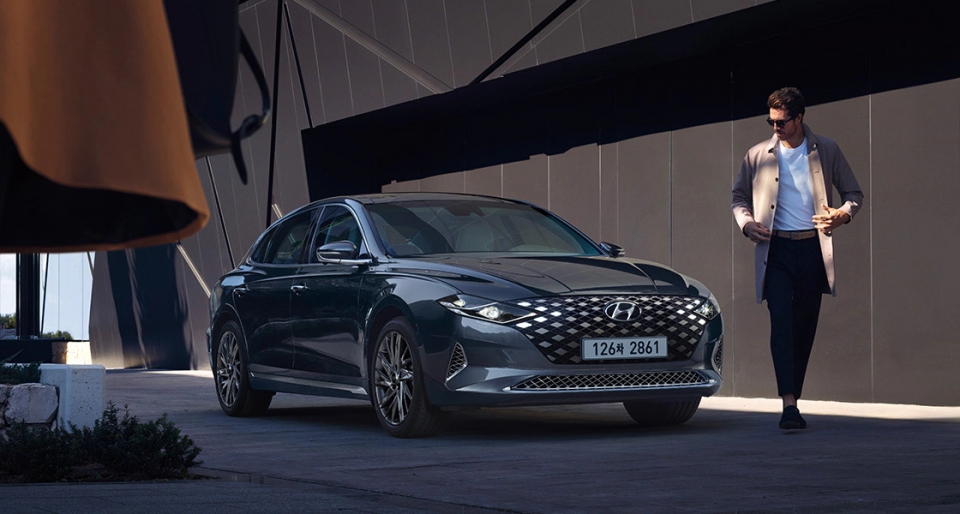 Hyundai Motor sold 55,502 units in the domestic market in June, down 21.1 percent from the previous year. Most of the major car models showed a double-digit decline in the aftermath of a supply shortage of automotive semiconductors, but it increased by 13.2% from last May, which suffered a severe slump.

Despite difficulties in supply and demand, the Grandeur (9483 units) still took the top spot in domestic car sales. However, this is a decrease of 39.6% compared to June last year, when 15,688 units were recorded. Nevertheless, it recorded a recovery rate of 21.5% higher than in May, which was hit directly by the production stoppage at the Asan plant.

The Asan plant, which produces the Grandeur and Sonata, was previously shut down on April 12-13, 19-20, and May 24-26 due to semiconductor supply and demand problems. In June, production was stopped for only two days on the 16th and 17th, and it is analyzed that the backlog has been largely resolved. In fact, the Sonata (6,127 units) produced at the same factory also rose 19.4% in sales compared to May, ranking in the top 5 domestic car sales for the first time in two months since April.

Porter (9208 units, 20.5%↑ from the previous year) is showing a steady figure, but Avante (5973 units, 45.1%↓ from the previous year) seems to be struggling a little as the effect of the new car is fading. Attention is focused on whether the sluggish sales can be compensated for by the launch of the high-performance model Avante N this month. In addition, the shipment speed of the brand’s first dedicated electric vehicle, the Ioniq 5 (3,667 units, 91.1% ↑ MoM) is gradually increasing. 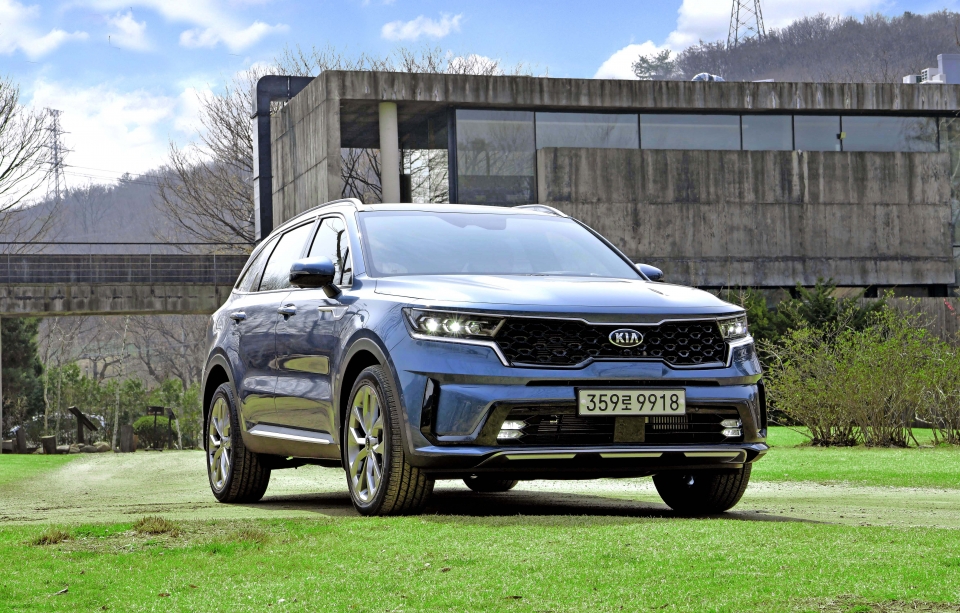 Kia sold 49,280 units in the domestic market last month, a decrease of 17.9% compared to June last year (65 units). Like Hyundai Motor, it appears to be entering a full-fledged sphere of influence while suffering from a shortage of automotive semiconductors. 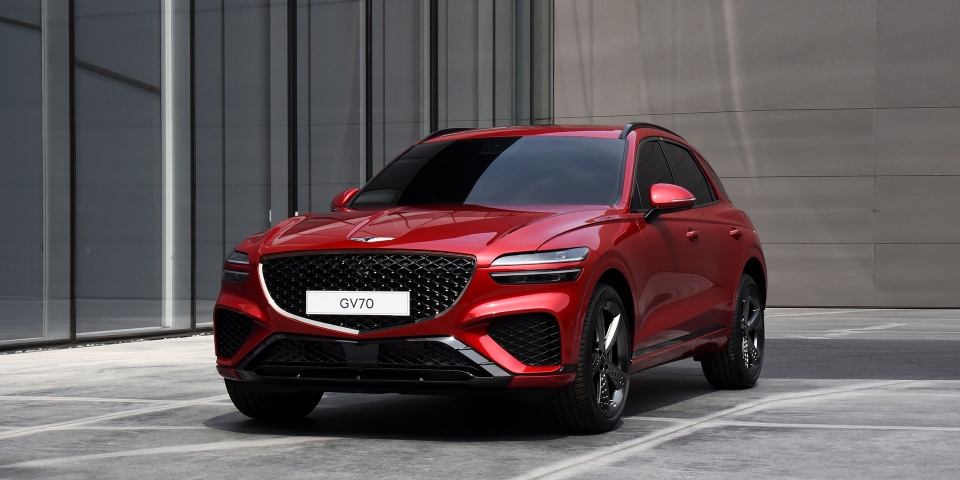 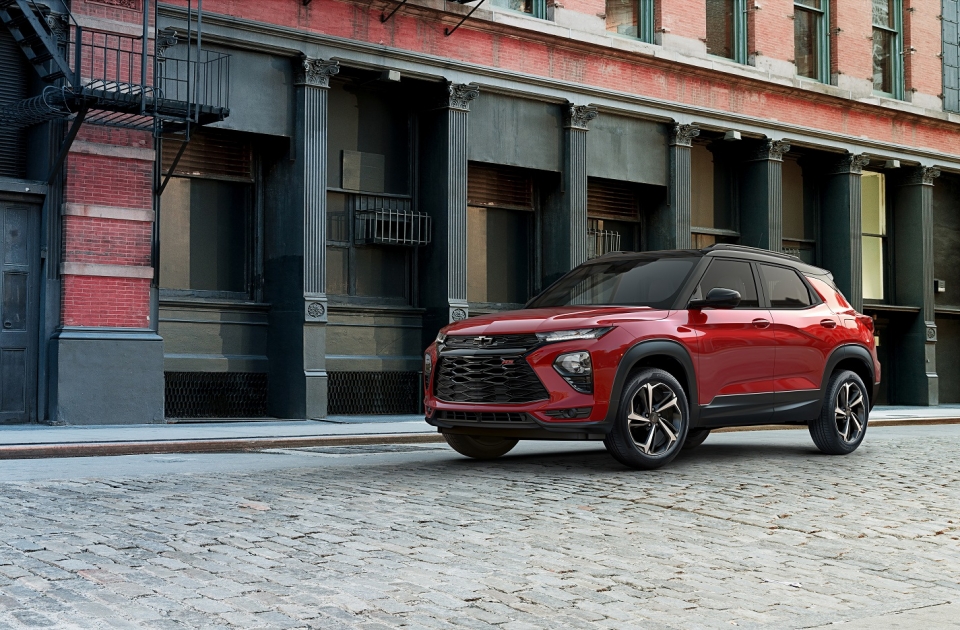 GM Korea sold 5,740 units, down 38.6 percent from the previous year. Compared to last May, when the factory’s utilization rate fell to half due to a shortage of automotive semiconductors, the sales volume in June increased by 24.9% and succeeded in falling behind.

Last month, GM Korea’s performance was led by Trailblazer (2671 units, 12.1% down from the previous year). Although the performance is not as good as in previous years due to the contraction of the small SUV market, it surpassed 2,400 units in 11 months since July last year (2,494 units). Trailblazer was followed by Spark (1603 units, 33.9% ↓ compared to the previous year). While the compact car market is rapidly shrinking, GM Korea plans to discontinue the Spark in October next year and convert the Changwon plant into a next-generation CUV production base. 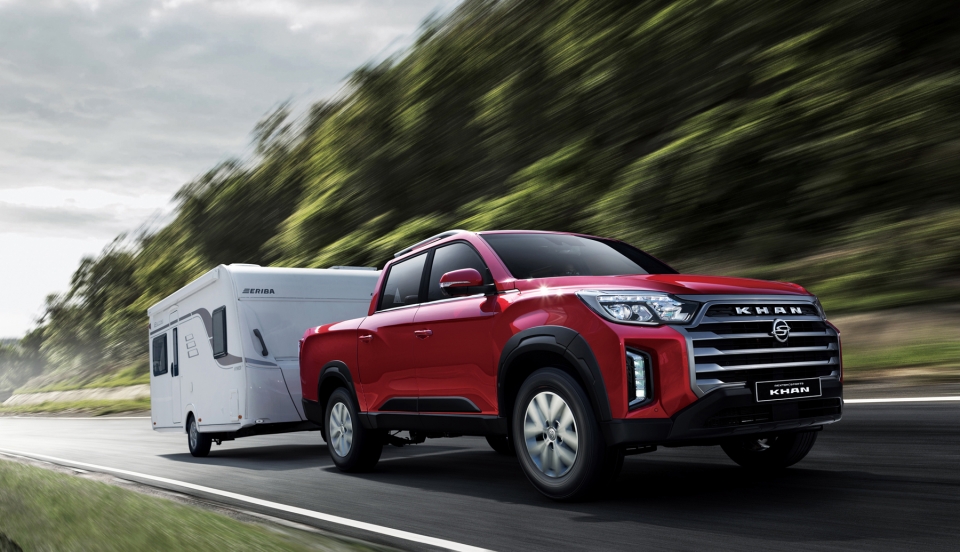 Ssangyong Motor, which is in the process of corporate rehabilitation, posted a sale notice at the end of last month and set out to find a new owner. However, it is known that EY Hanyoung Accounting Firm, the lead manager of the sale, has submitted a final report to the court that liquidating the company is more valuable than maintaining it, turning the red light on the M&A. 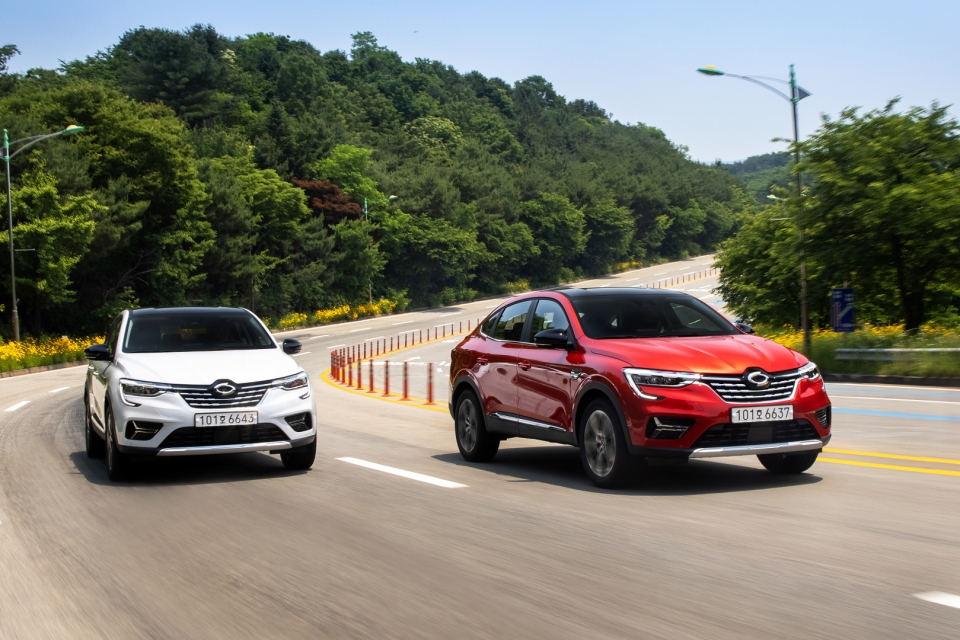 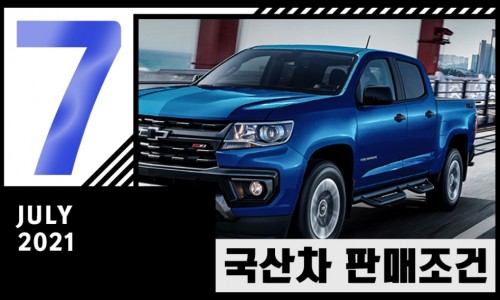 General summary of domestic car sales conditions in July… Ssangyong Motor that runs even if it hurts, and Kia that keeps stock
In July, the domestic car industry started preparing various promotions for the full-fledged summer season. Renault Samsung and GM Korea pulled out the upper trim upgrade card along with a cash discount, and Ssangyong Motor, which was in crisis of company extinction, is also busy trying to catch customers by participating in its own discount and the government’s ‘accompanying sale’ event. On the other hand, due to the car semiconductor crisis, Hyundai-Kia Motors, which is experiencing setbacks in the production of new cars due to this, runs only stock car discounts without special promotions. # Hyundai Motors “Buy another car other than the Ioniq 5 this month too~” Due to the shortage of automotive semiconductors, production of new cars is disrupted
www.motorgraph.com 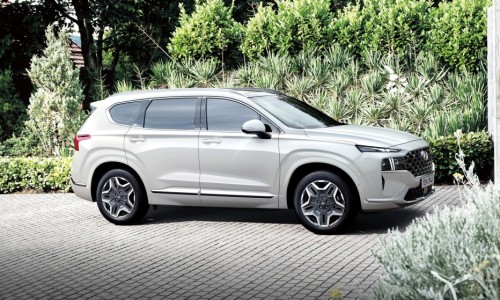 “It came out after a year!” Hyundai Santa Fe hybrid pre-contract commencement
Hyundai Motor Company will accept pre-orders for the Santa Fe Hybrid from the 1st. The hybrid model, released a year after the release of the 2.2 diesel model at the end of June last year, is a combination of a 1.6L gasoline turbo engine with 180 horsepower and a 44.2 kW electric motor, and exhibits a maximum output of 230 horsepower and a maximum torque of 35.7 kgf m. The new car is characterized by superior interior quietness and comfortable driving sensibility through the EV mode, which runs only with the driving motor without engine intervention at low speeds. Combined fuel efficiency is 15.3 km/L (based on 5-seater, 17-inch wheels, 2WD), Kia Sorento Hybrid sharing powertrain
www.motorgraph.com 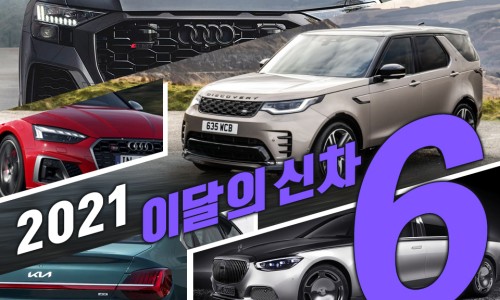 [이달의 신차] From K9 to Maybach… ‘Dignified change of flagship’
In June, a new flagship lineup with enhanced product quality stood out. Kia introduced the K9 facelift model, and Mercedes-Benz introduced the Maybach based on the new S-Class. Audi has released a high-performance version of the Q8, and Jaguar and Peugeot have released the F-Pace and 5008 partially modified models, respectively. Separately, the Audi S5 and Land Rover Discovery partially changed models also entered the imported car market. In June 2021, we included short comments from Motorgraph reporters on ‘New Car of the Month’. # Kia The New K9, “The rear view is a bit …”
www.motorgraph.com 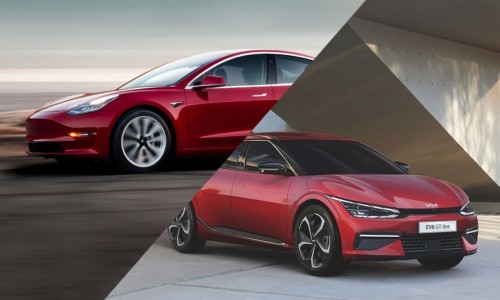 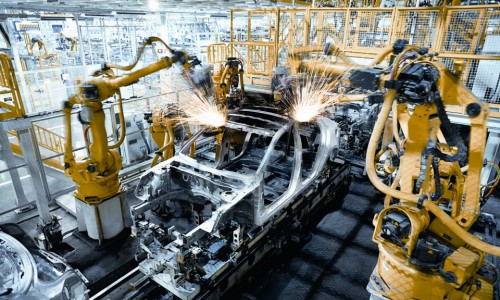 [상반기 결산] Corona 19 and the semiconductor crisis… “You have to change to survive!”
In the first half of 2021, vaccination against COVID-19 will begin, and the social atmosphere is gradually reviving. However, the automobile industry is experiencing difficulties, such as shutting down factories and revising new car plans due to the global semiconductor supply and demand instability before the pandemic shock has even gone away. It reorganized its business mainly, and began to search for new foods such as purpose-based mobility and urban air mobility. We looked at the rapidly changing automobile industry in the first half of this year. # Since Corona 19 is over, semiconductors are a problem now! Global
www.motorgraph.com 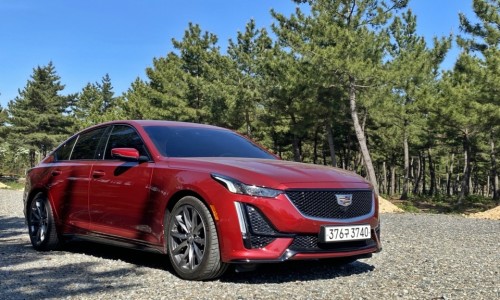 [시승기] Cadillac CT5 “Good, but lack of effort if it doesn’t sell!”
In the 21st century, Cadillac has struggled to break free from the past. The head office was moved from Detroit, USA to New York, and an unconventional design and dynamic driving sensibility were actively introduced. Through this, it has declared that it will be reborn as a young and sporty premium brand. In fact, until the early 2010s, the attempt was not particularly impressive. Designs such as ELR and SRX were somewhat bizarre, and the front-wheel drive lineup such as DTS, XTS, and BLS was boring as promised. The same was true of the predecessor CTS of CT5. From the lack of driving sense to the old-fashioned interior and the poor ride quality?
www.motorgraph.com