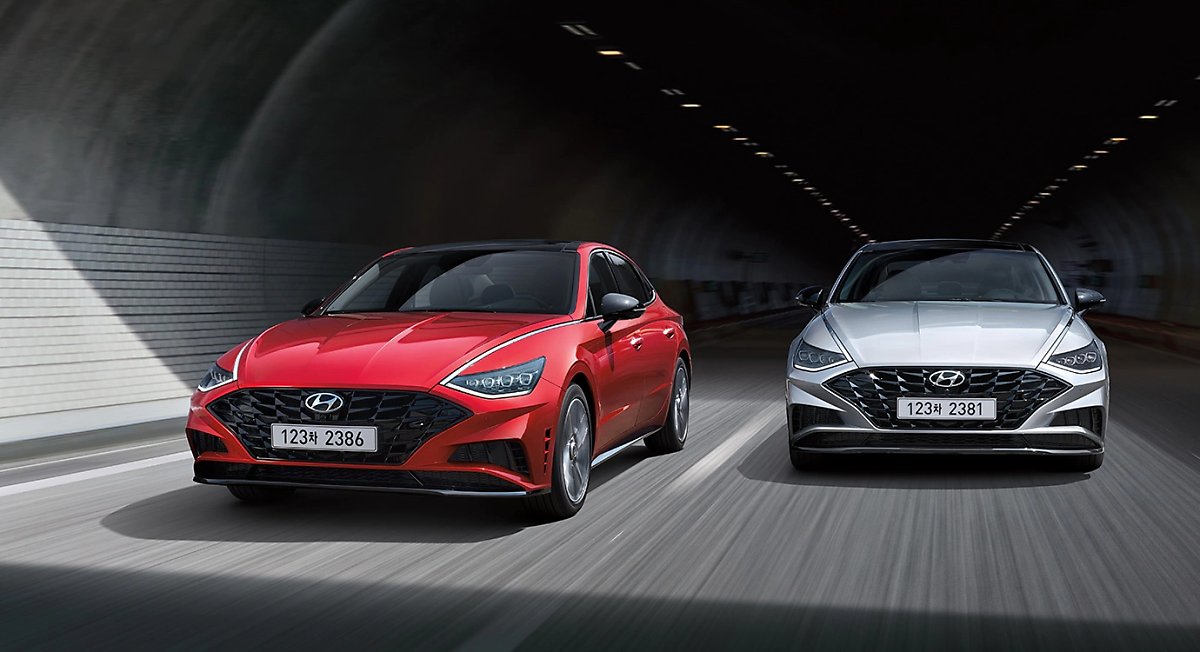 Sonata and K5 compete for the first and second place in the domestic midsize sedan market.

It is a mid-sized sedan representing Hyundai Motors and Kia, respectively, and many consumers are contemplating the two models. Both models have a lot in common as they are models of brands belonging to the Hyundai Motor Group. The same platform, powertrain, external dimensions and interior space are almost identical.

However, the two models are clearly differentiated in various areas such as different brand characteristics and externally visible interior and exterior design.

So, for the content prepared by VIEW H today, we are going to talk about the Sonata that the K5 owner burned.

Let’s take a look at the characteristics of the Sonata, which the owner of the K5, the Sonata’s biggest rival, has experienced, and the differences between the two models. 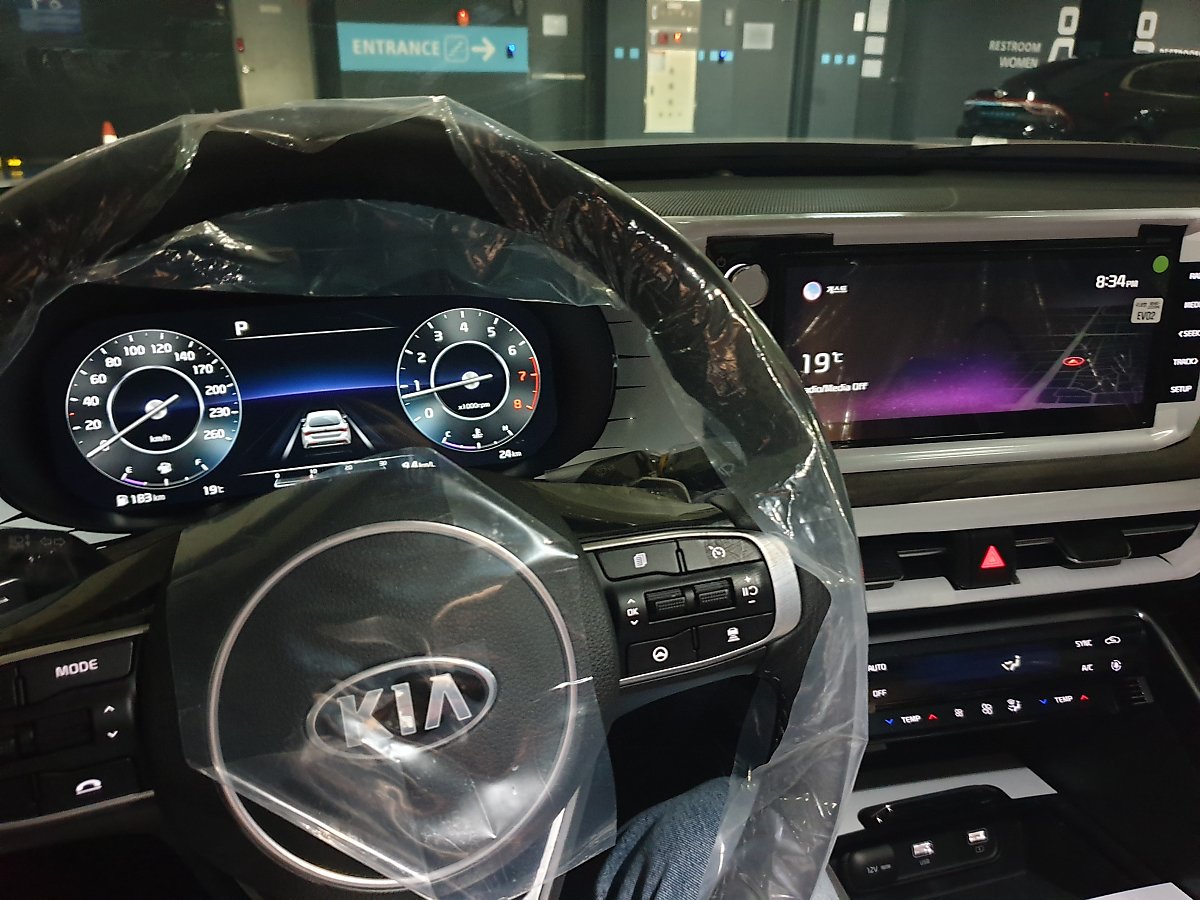 Hello, I am a car owner who shipped the K5 in October last year and has been running it for about 7 months. In the past, while riding a semi-medium model, it was time to replace the vehicle, and I was considering a mid-size model. I prefer the sedan to the usual SUV, so I decided to compare the K5 and the Sonata.

There were many similarities in various areas, such as the size of the vehicle and the interior space, so I had a lot of thoughts. In the end, I chose the K5, but there were many opinions that the car I was riding in before was Kia, and that the K5 was a little sportier in terms of driving comfort.

In fact, at the time, I tried two models once, and it was difficult to feel everything about the vehicle in a short period of less than an hour. Currently, I feel a great satisfaction while operating the K5, but sometimes I think,’What would it be like to buy a Sonata…?’

While currently operating the K5 for about half a year, there was an opportunity to ride the Sonata model, which I was worried about at the time, and there will be quite a lot of people thinking about the two models like me.

As for the design, you can easily compare it on YouTube or the manufacturer’s website, so I will only point out the characteristic parts. In fact, design is a difficult part to clearly conclude that’this design is a good design’ because each individual’s taste is different and subjective. 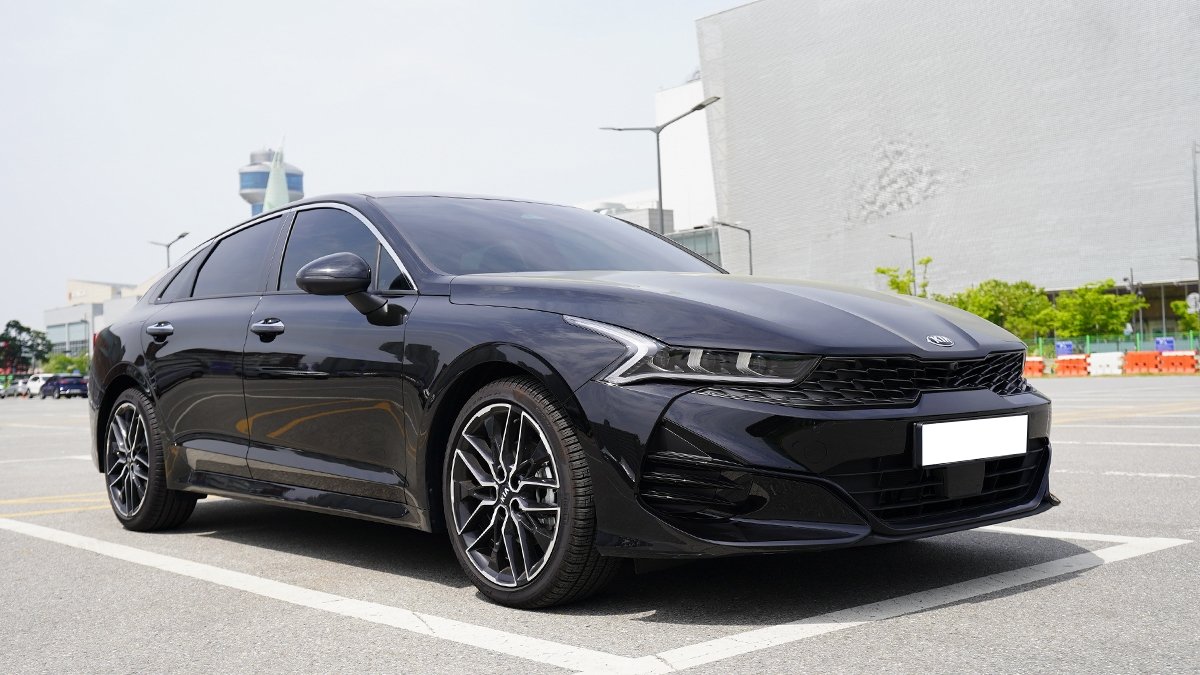 Whenever I look at the K5, I always feel that the image is quite aggressive and militant. The short width of the radiator grille and the design that extends left and right to form a unity with the headlamps are quite attractive. 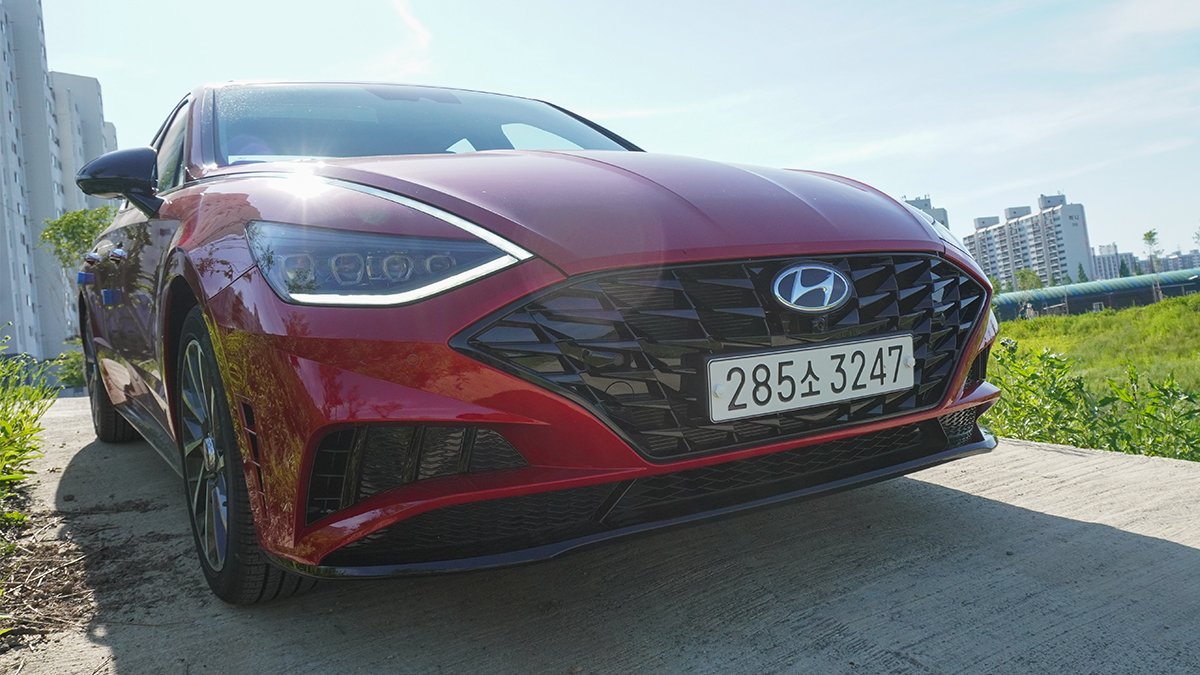 Sonata’s previous 1.6 turbo model, Sensures’ design has been extended to 2.0 model through the model year change model, so the sporty image of the previous 2.0 model has been further emphasized. 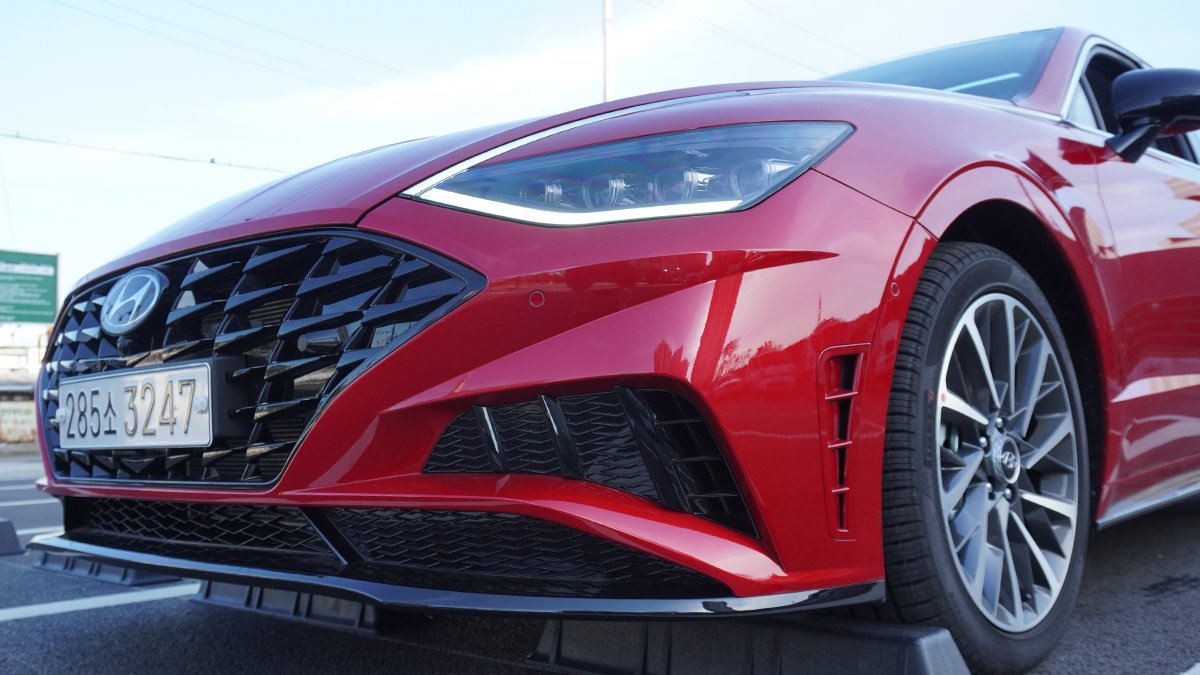 The size of the radiator grille is longer than before, the air curtain design with a sleek feel, and a garnish consisting of 4 holes is the same as the design applied only to the 1.6 turbo model. 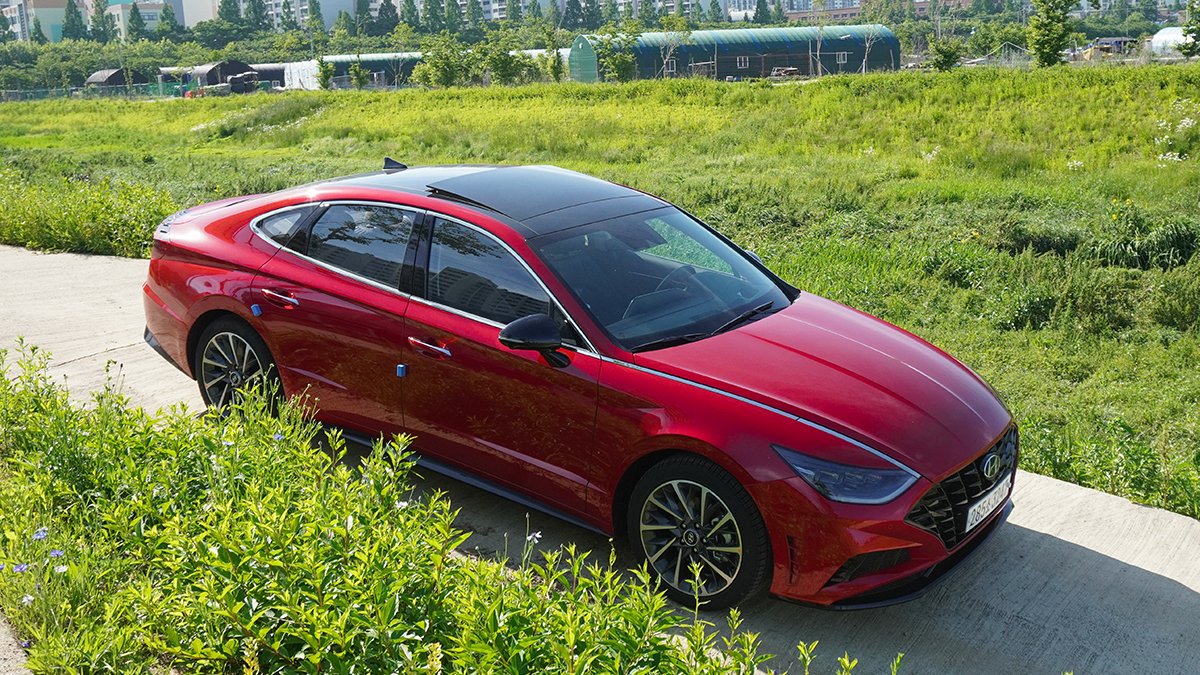 In particular, the side view seemed to show the pinnacle of the Sonata design. At a glance, the lines that make up the sides are sporty and elegant at the same time due to the voluminous curves and unique shapes, so I think the sides are the most characteristic part of Sonata’s design. 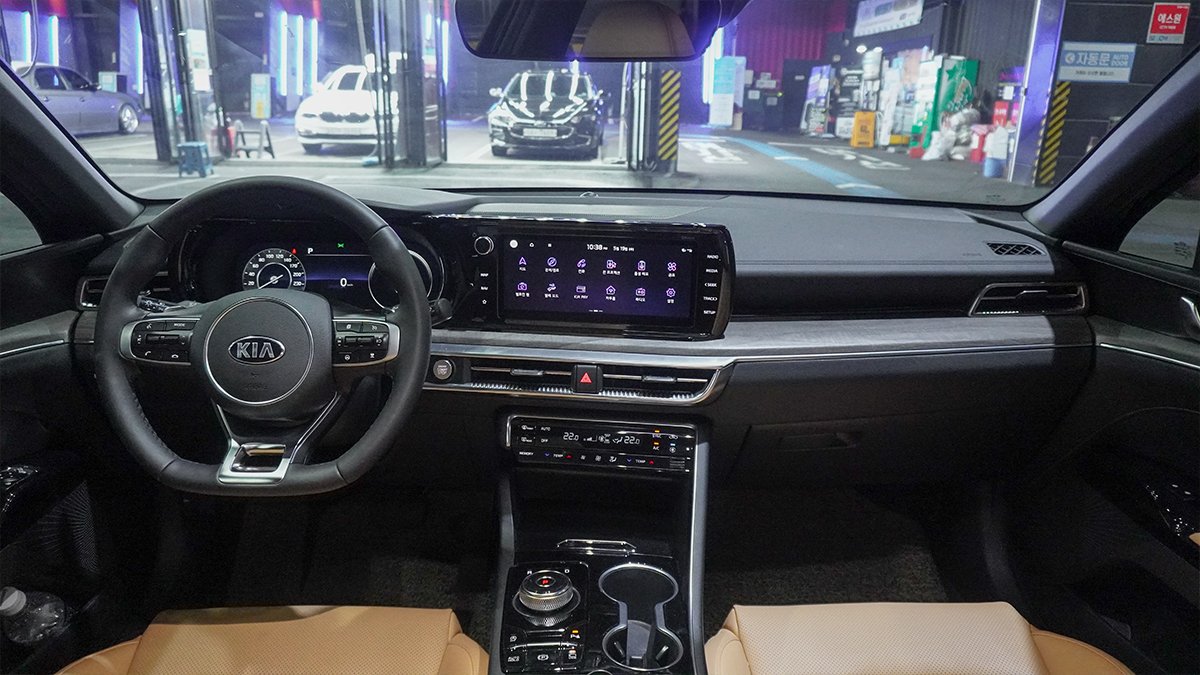 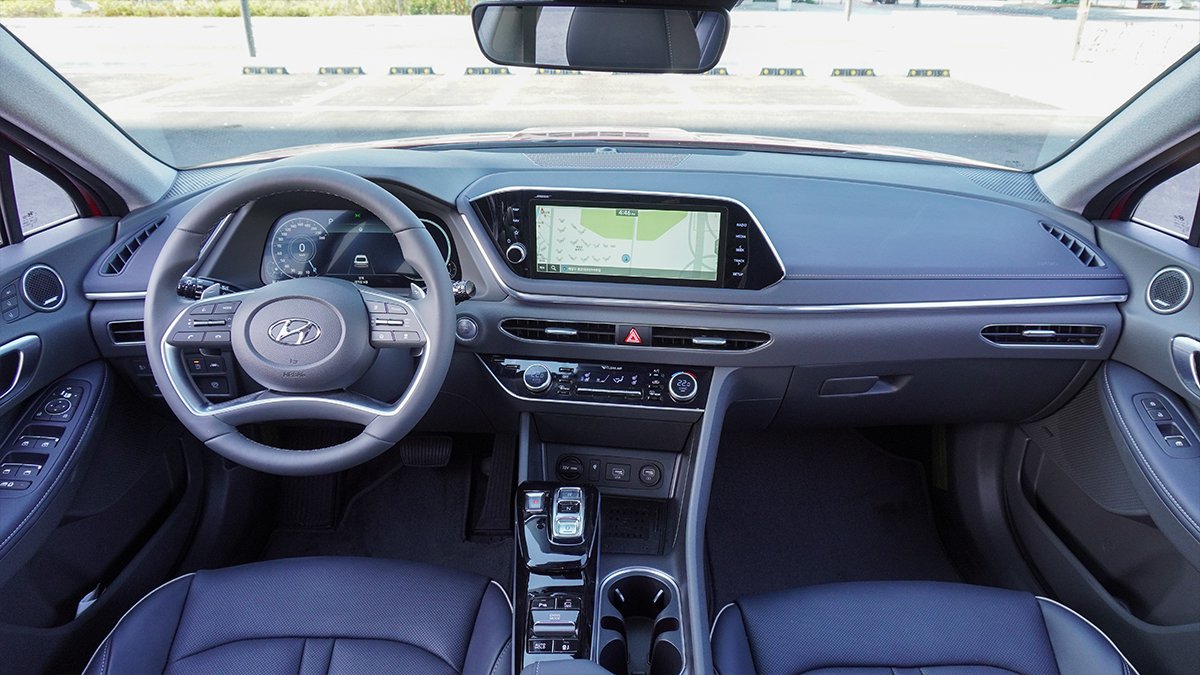 As for the interior design, the K5 has a strong image of a straight line, while the Sonata emphasizes the feeling of curves such as the display, air conditioner, and air vent design, so you can see a voluminous and soft feeling. 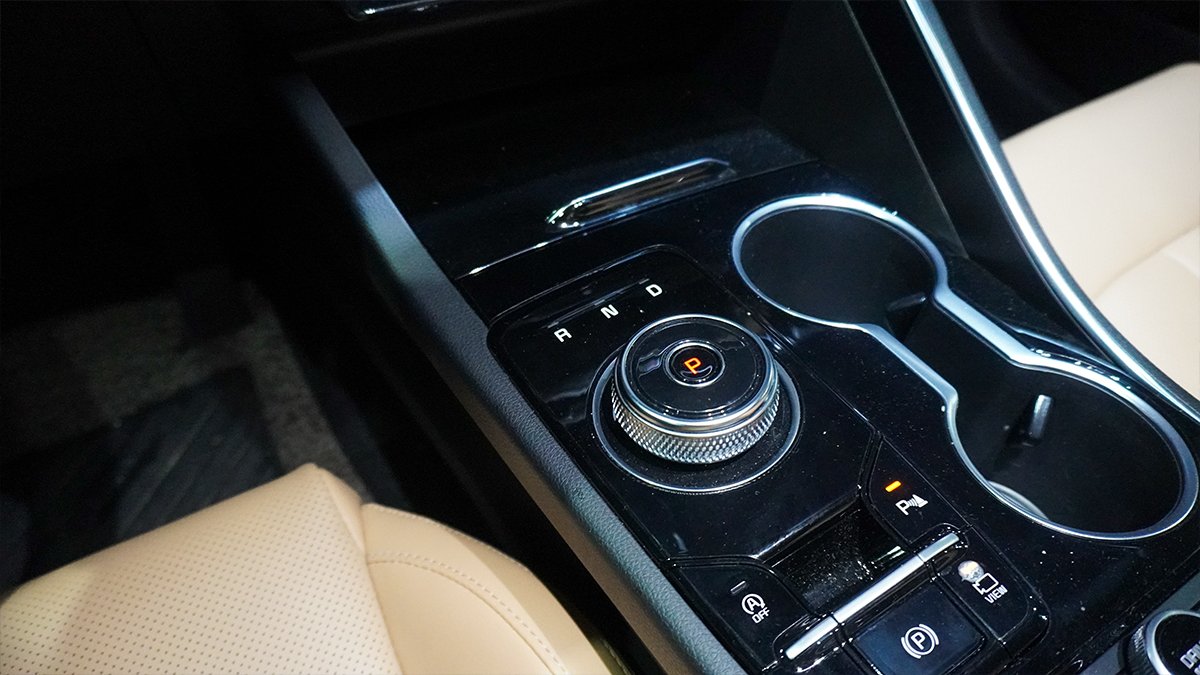 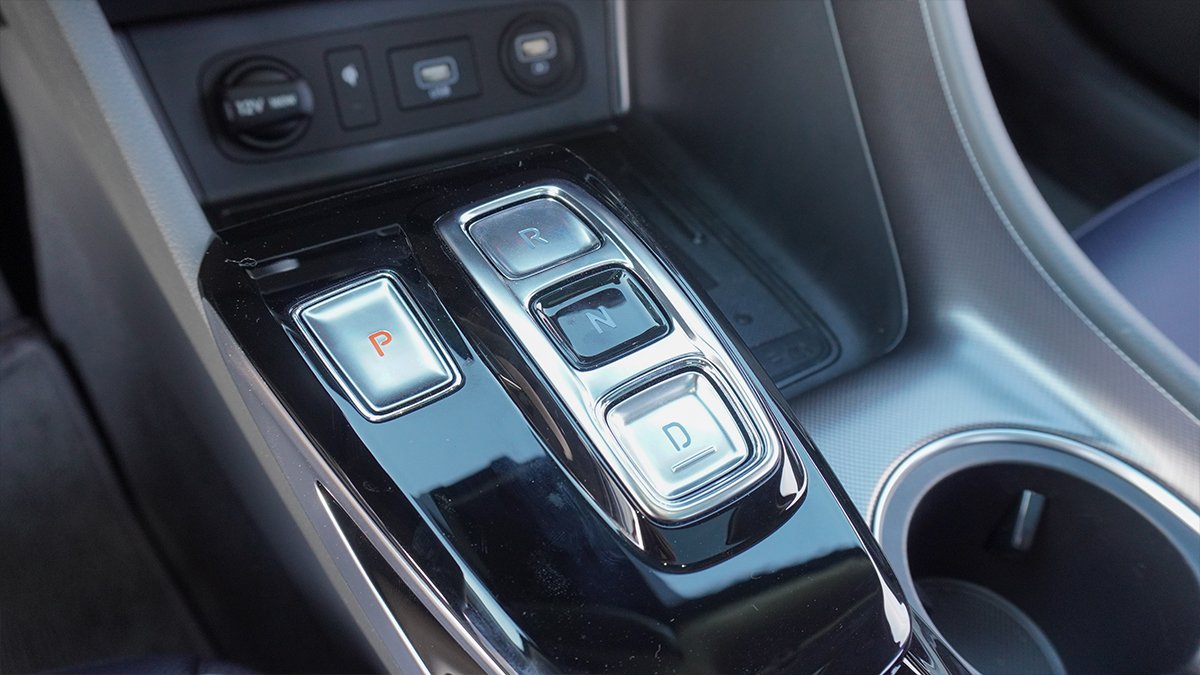 The biggest difference in the interior of the two models is the air conditioner control unit and the gear control unit. 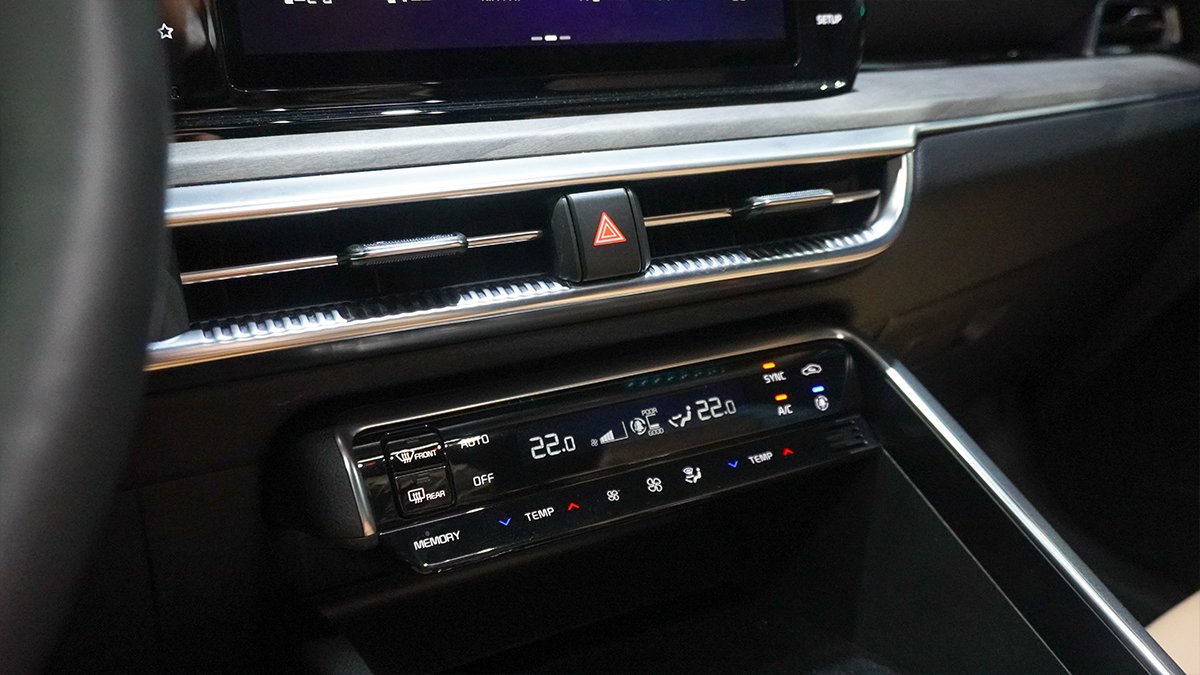 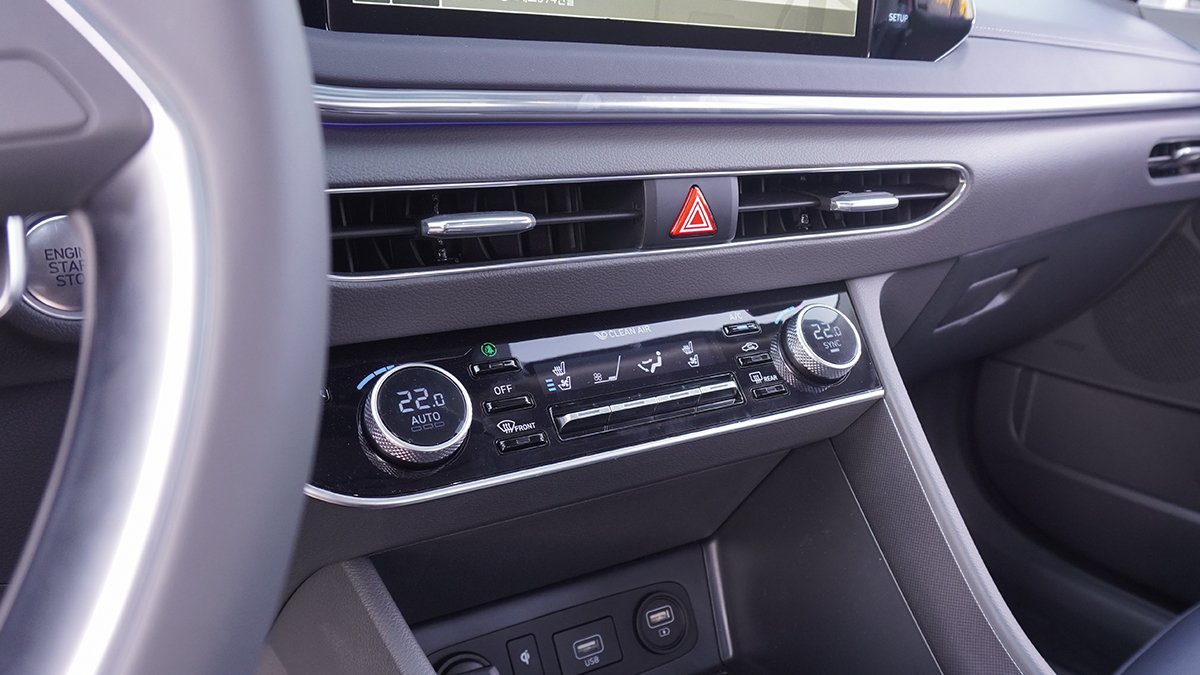 In common, the air conditioning control unit is designed harmoniously with the overall layout and is slightly twisted toward the driver’s seat, so the ease of operation is good. Operability was felt.

On the other hand, the Sonata is composed of physical buttons, but overall, the Sonata is a little better in terms of convenience because it does not harm the design of the clean display configuration and is easy to operate.

Looking at a little more detail, the part that I thought was uncomfortable while riding the K5 is the arrangement of the storage space. 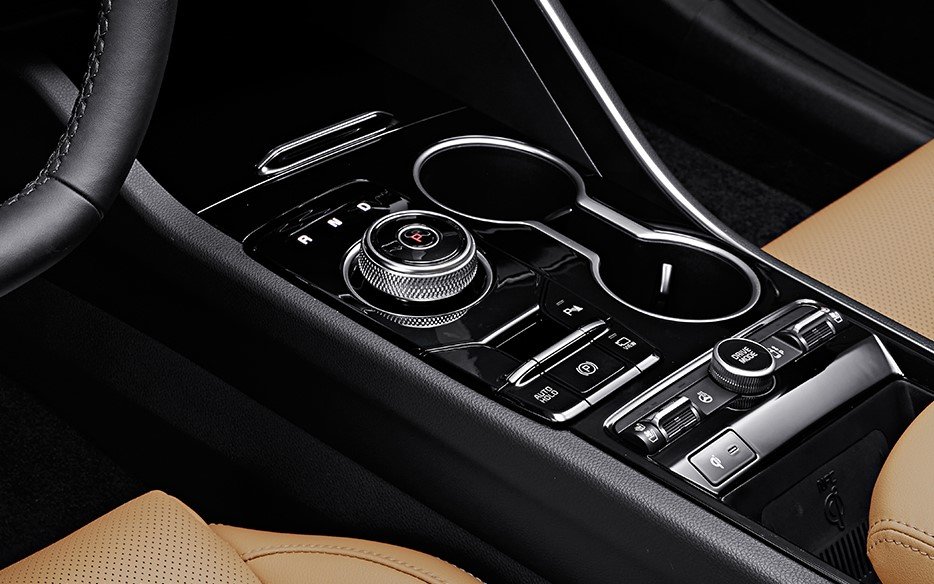 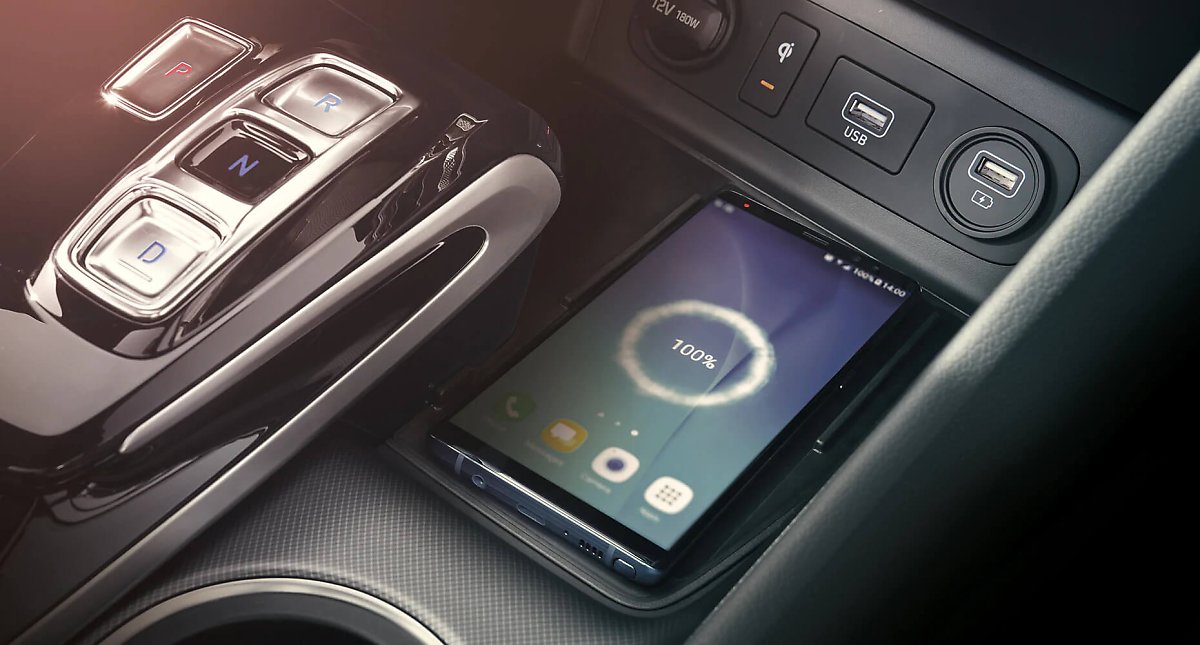 Of course, for a neat interior design, it may be the best location to put it in an invisible place, but if you have an urgent business and need to check your smartphone for a while, and if you use a digital key, it can be a bit inconvenient, so I think the Sonata is better. 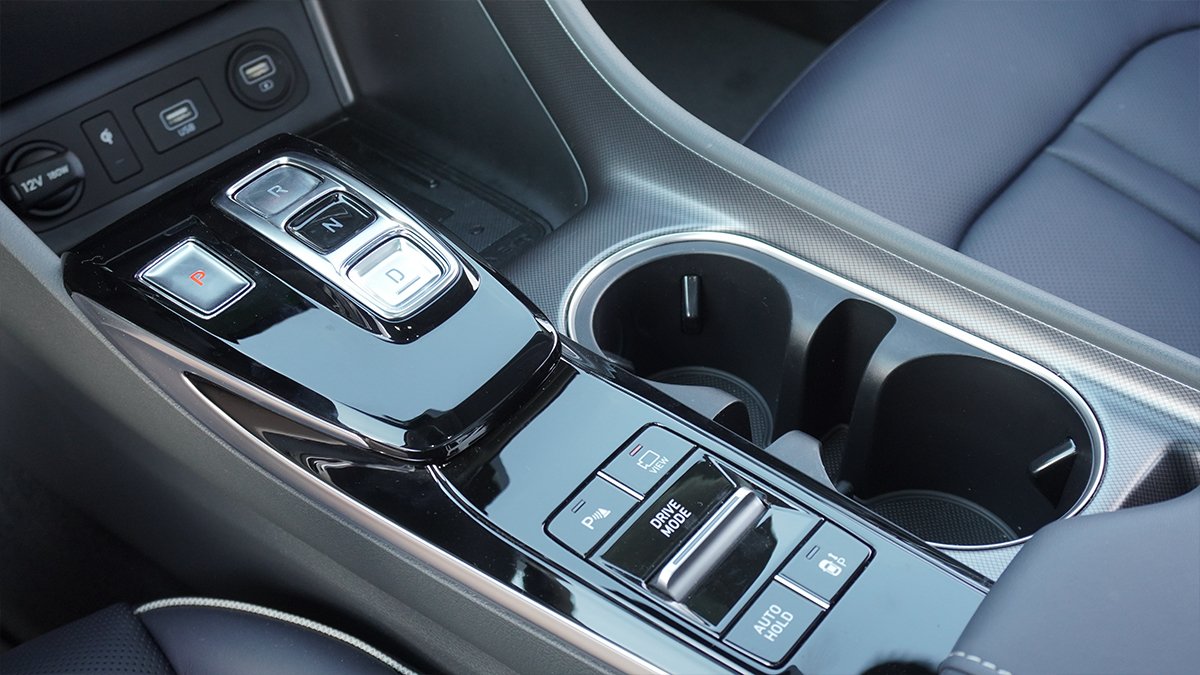 In addition, there is a space for storing smartphones in the center of the Sonata’s cup holder, which is very convenient even when wireless charging is not in use. 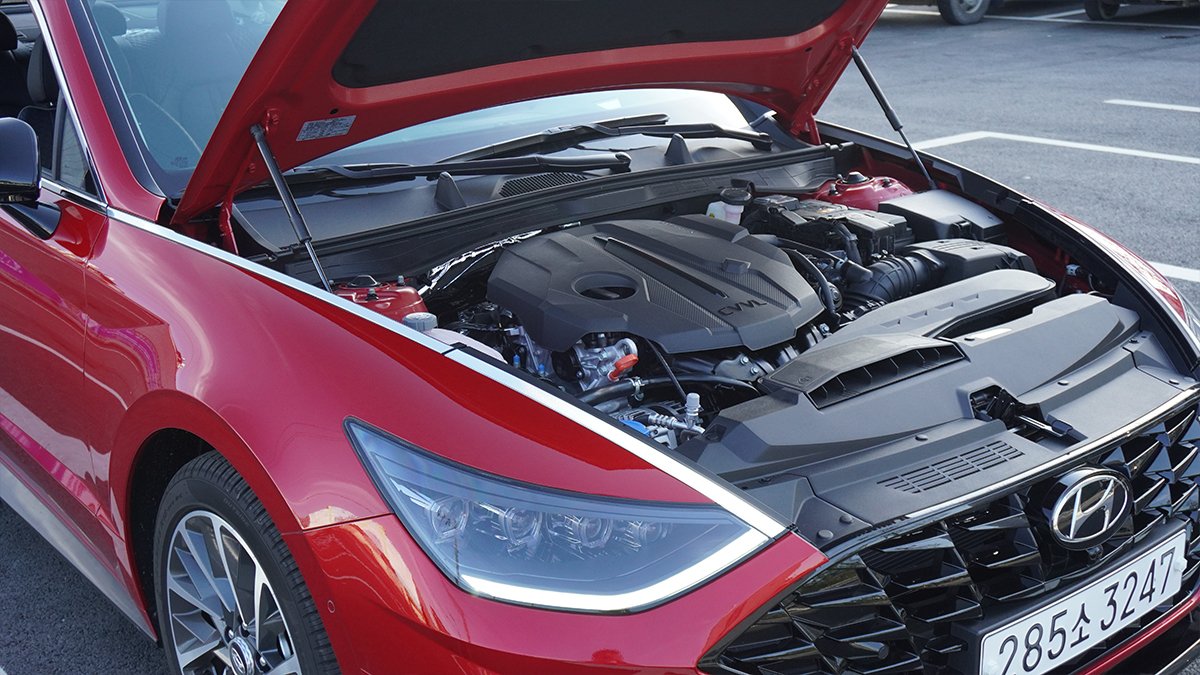 The model I tested this time was the Sonata 2.0 model, which was difficult to compare in terms of engine performance with the K5 of the 1.6 turbo engine I am running, but in addition to the overall driving performance, a clear comparison was possible. 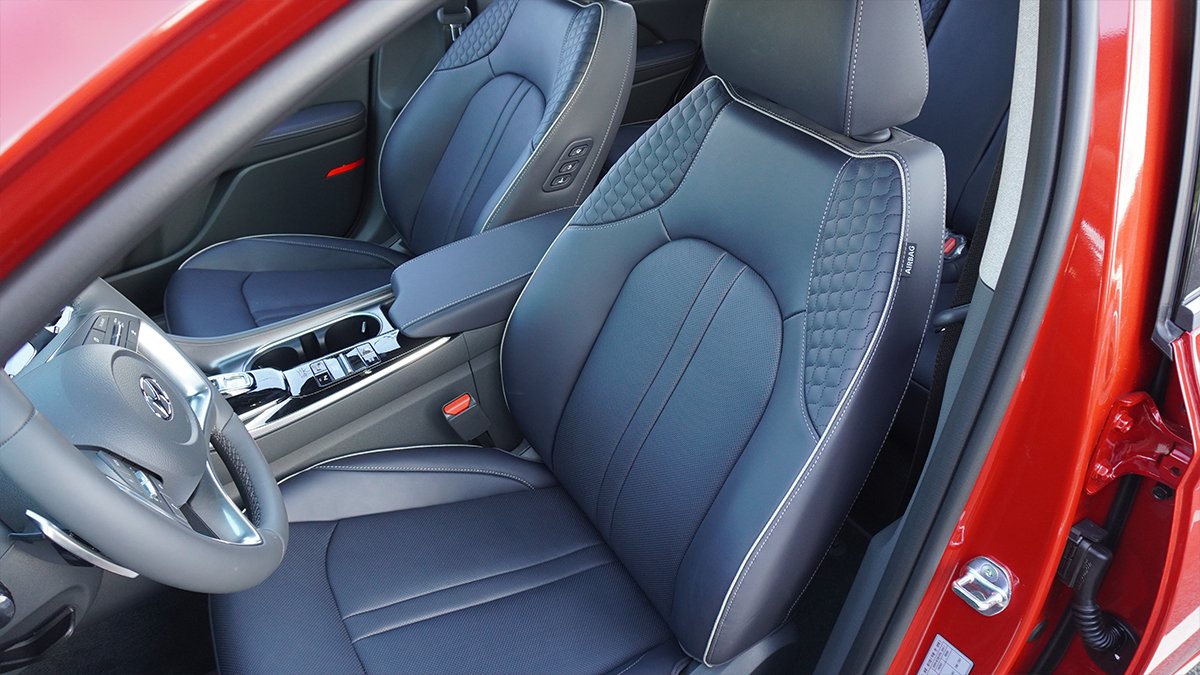 First of all, as soon as I got into the driver’s seat of the Sonata, I felt the difference in seat position. When I set my position in the usual driving posture and looked at the front, the visible field of view was a little wider and the bonnet area was seen farther away. 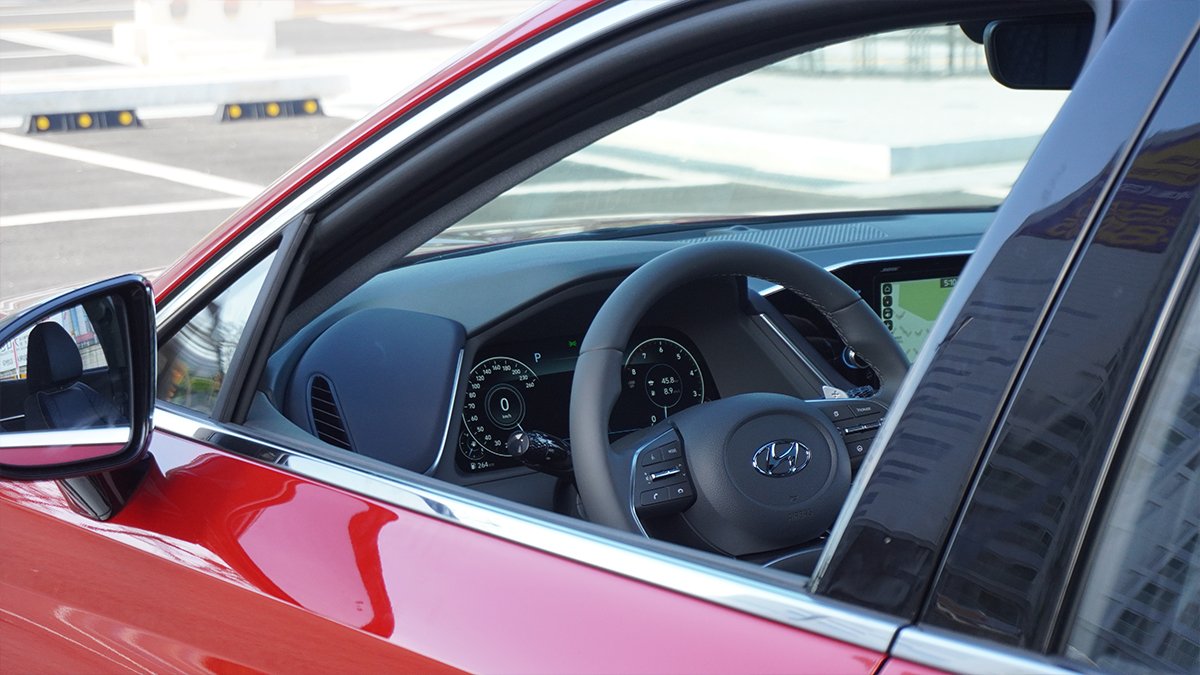 Recently, consumers of all sedan models, including Hyundai Motor Company and Kia, have considerably lowered their seat position, and are sometimes uncomfortable. That’s why there are cases in which SUVs with relatively high visibility are chosen.

Personally, I prefer to have a lower seat position because of my sporty ride, and I thought the K5 fits me better than the Sonata in that respect. However, it can be said that it is an advantage in that you can see a wider field of view. 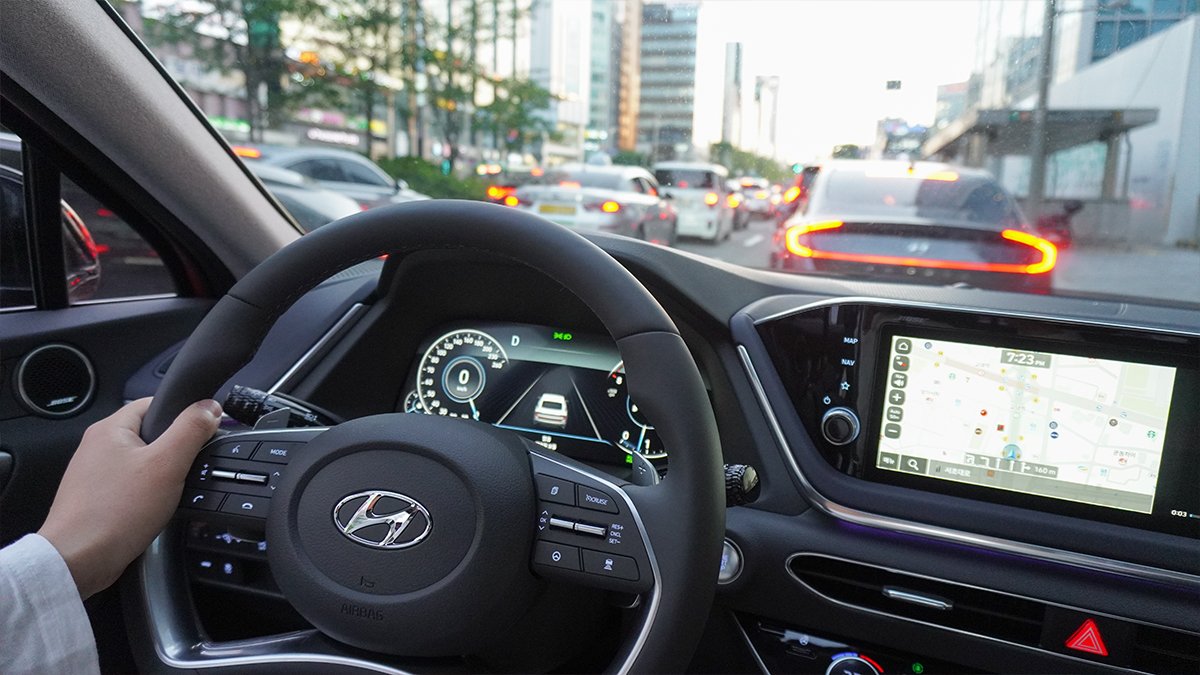 Since I usually run my vehicle every day for commuting, I was able to feel the difference between the two models in several areas while riding the same section.

In addition to the seat position mentioned earlier, the following will look at the ride comfort that those who are contemplating the two models will be most curious about. 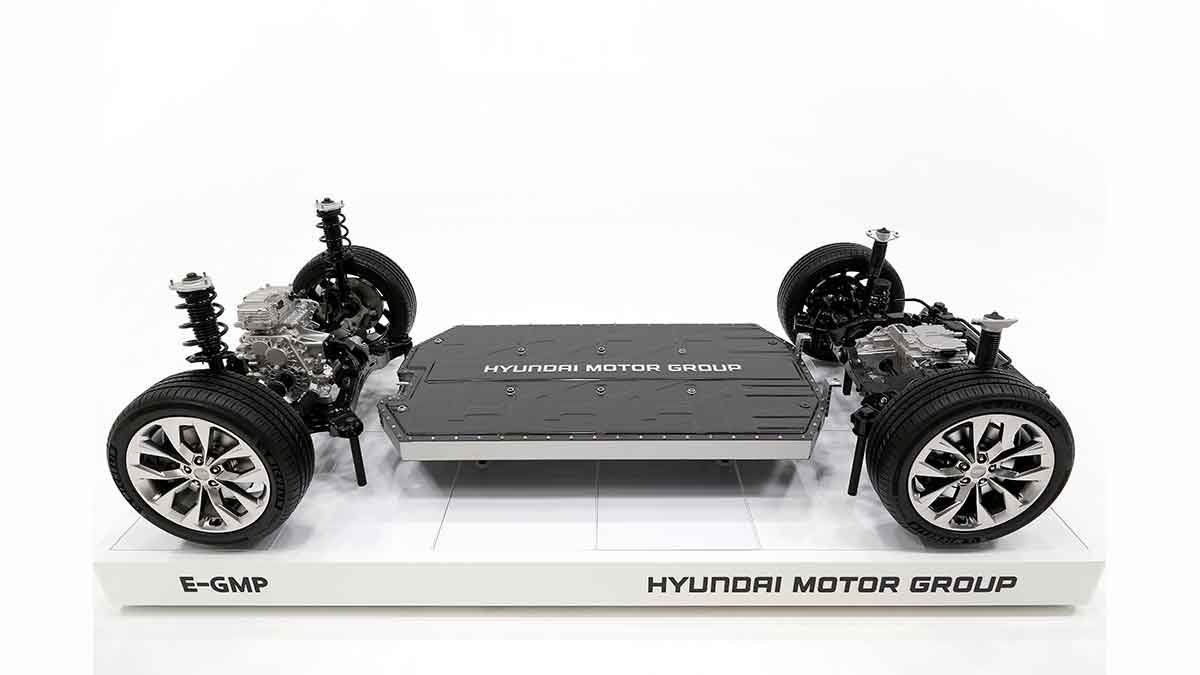 However, I could feel a big difference in the lower body setting of stiffness and softness, which is a measure of the ride comfort, but to define it in a word,’K5 is hard and Sonata is soft’. 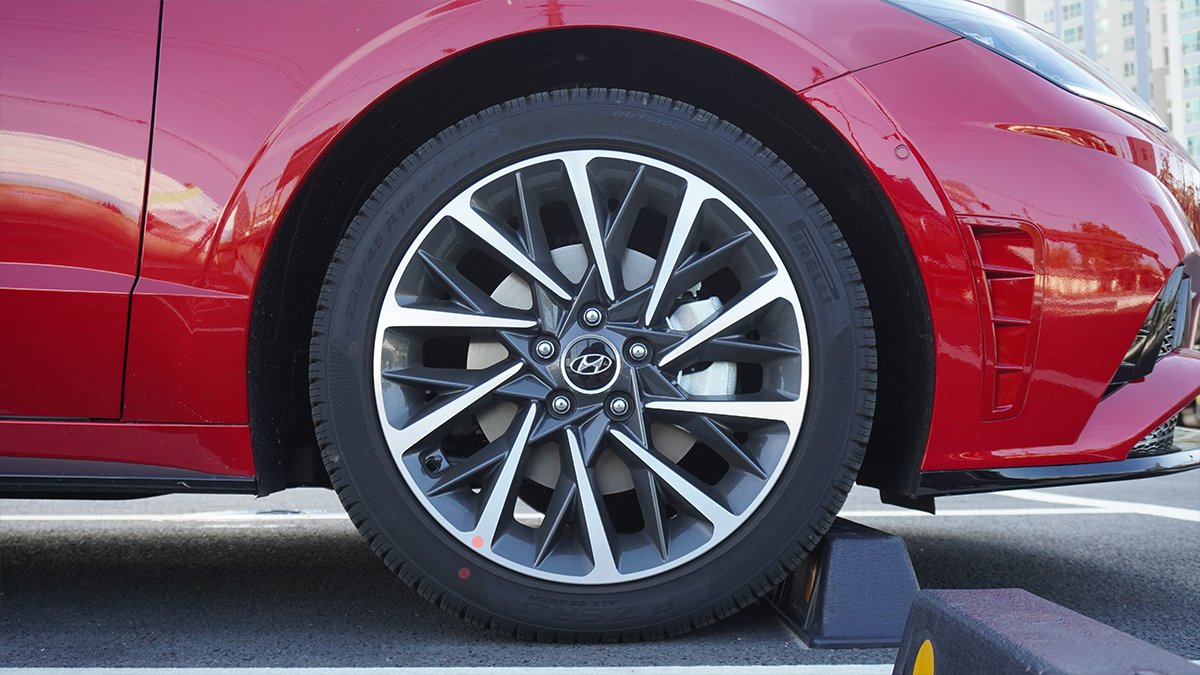 Of course, it is difficult to explain through absolute numbers, but when passing through the uneven section, the K5 gives relatively rough feedback to give the natural feeling of the road surface as much as possible, while the Sonata gives feedback to understand the road surface, but rather than rough I got the feeling that it was refined and delivered as neatly as possible. 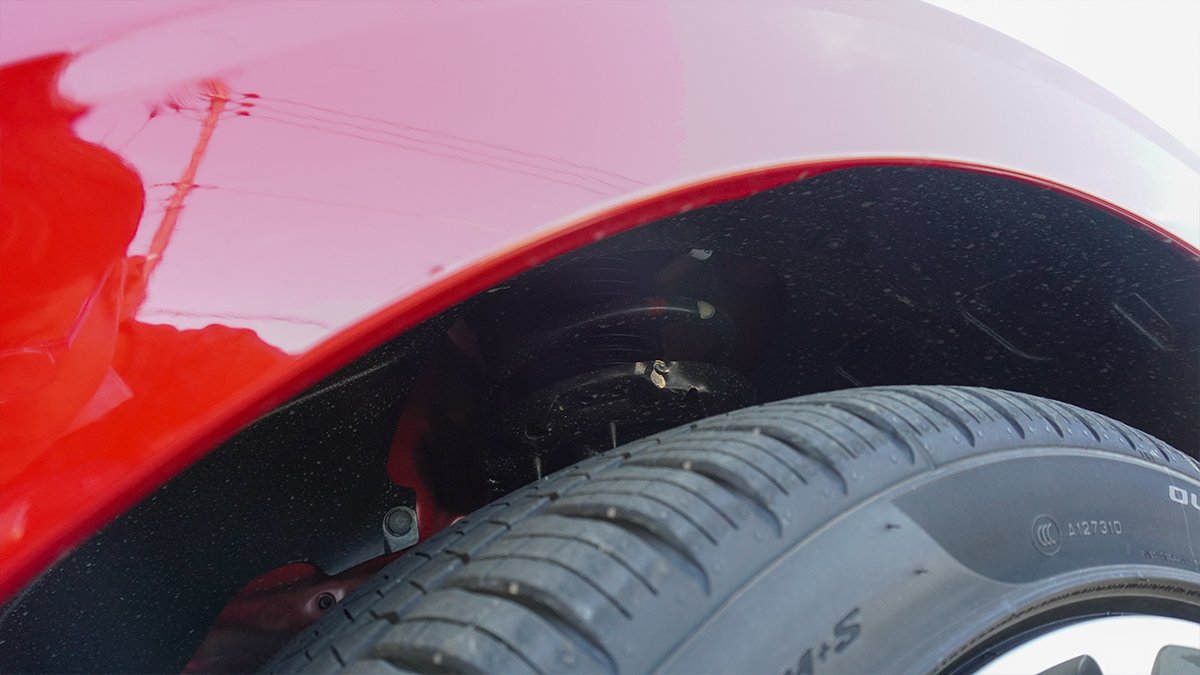 In addition, it felt differently after going over the bumper and swaying up and down to absorb the shock. There was no significant difference when crossing the same bump, but the Sonata felt relatively smooth. Overall, I experienced the two models myself and I could feel the difference.

As mentioned earlier, the model I’m riding is a 1.6 turbo model, and the Sonata I’ve been riding this time is a 2.0 model, so it was difficult to compare engine performance. The 2.0 engine I felt was less performant than the 1.6 Turbo model, but it wasn’t bad enough in everyday life. Also, while the 1.6 Turbo model produces a sporty exhaust sound, the 2.0 model is quite quiet when driving. 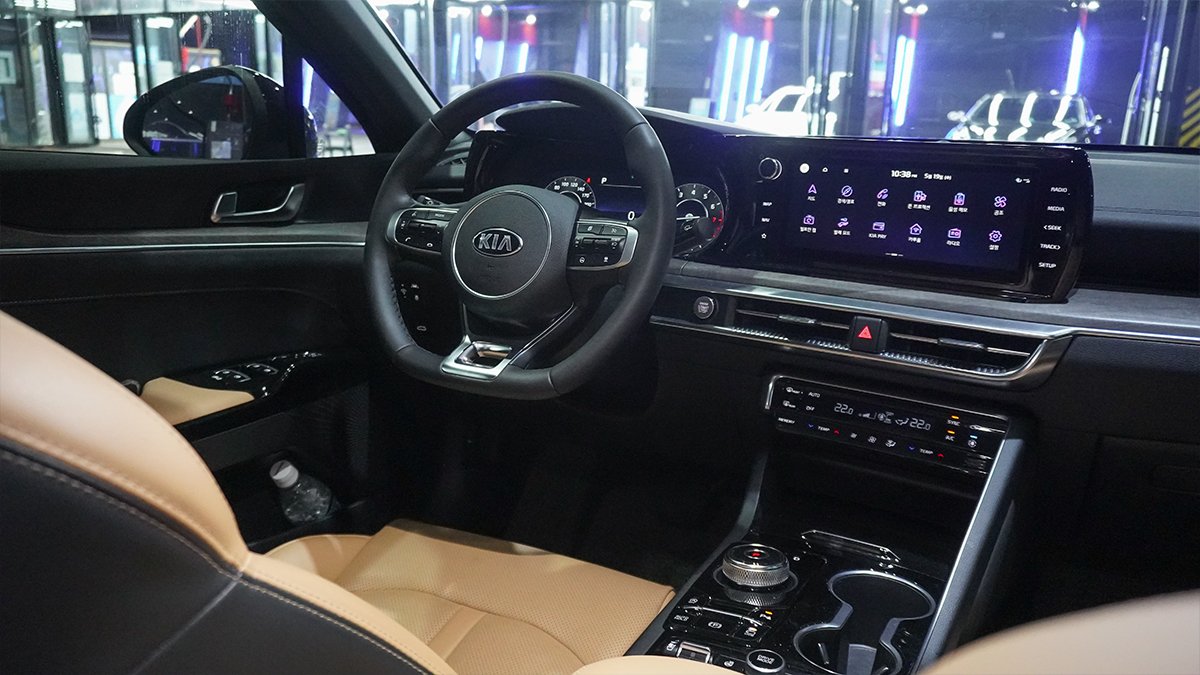 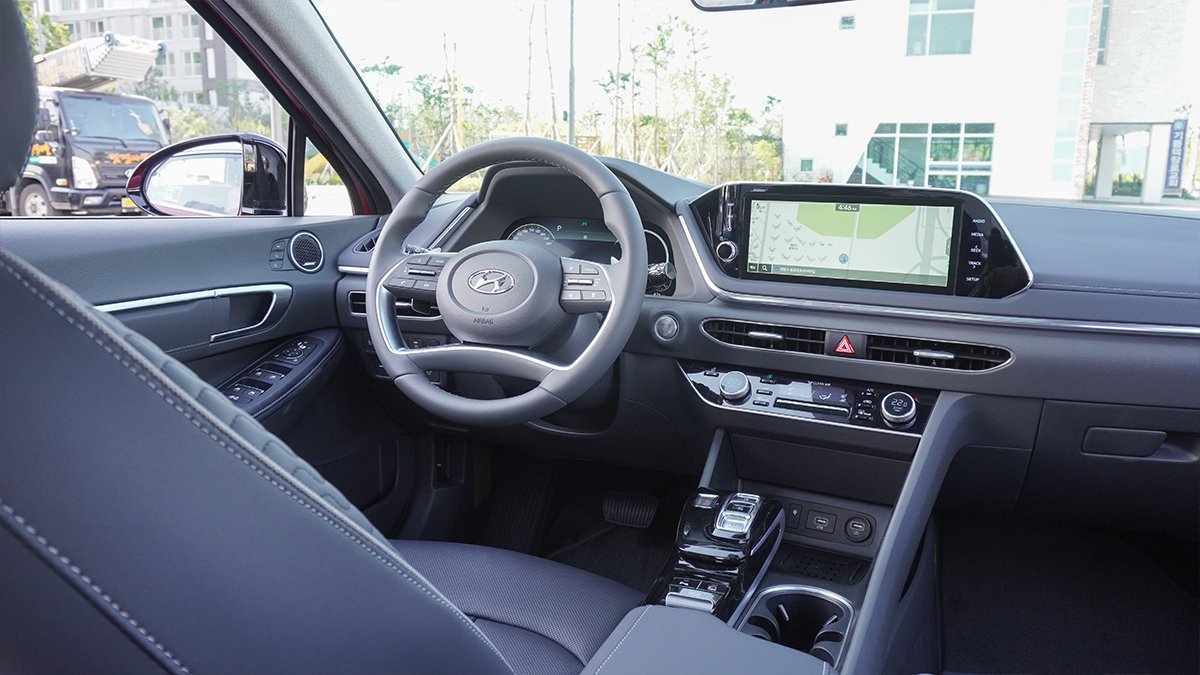 On the other hand, the convenience of operation that was pointed out when explaining the interior design part was actually operated, and the advantages and disadvantages of the touch buttons and physical buttons seemed clear.

The buttons that can control the air conditioner applied to the K5 in a touch format showed a much cleaner and high-tech image from a design point of view. However, sometimes, when operating while driving, the feedback was unclear and the boundary between the operating position and the button was somewhat ambiguous, which made me feel uncomfortable.

On the other hand, the Sonata is all composed of a physical button, so even if it is operated while driving, the feedback is clear and I think it is better in terms of convenience. 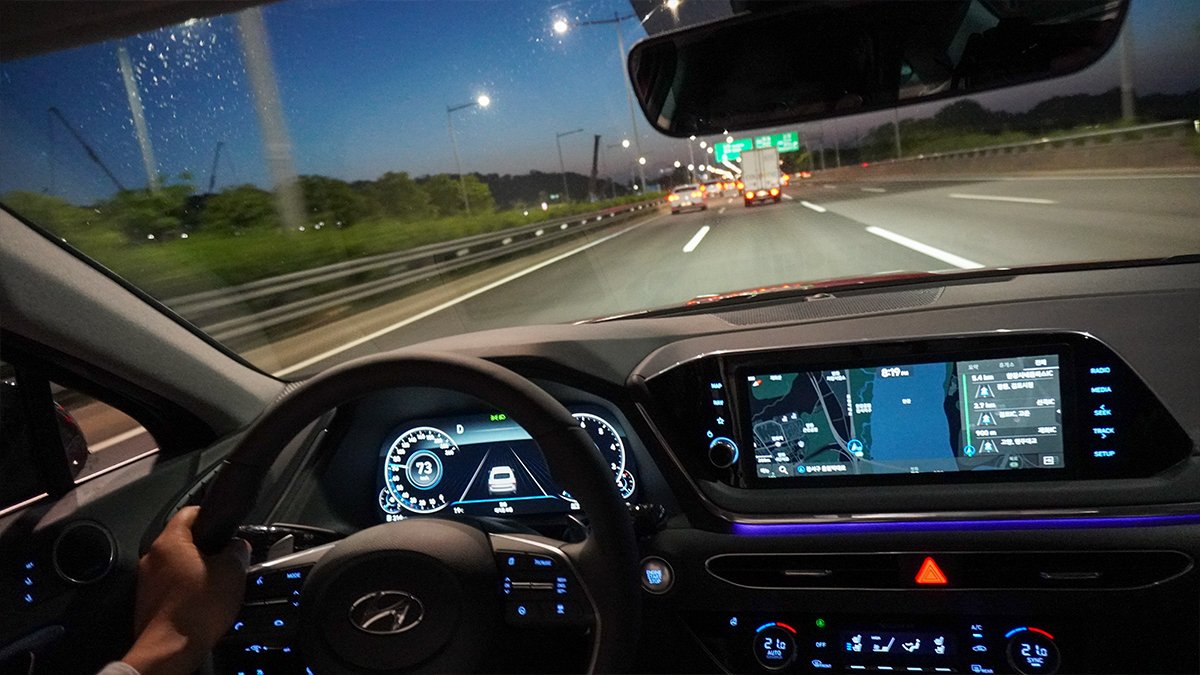 Having experienced the two models so far, the strengths of each have been clearly felt. Both models were quite satisfactory in terms of convenience specifications, space, and driving performance that were not lacking in any of the car classes. 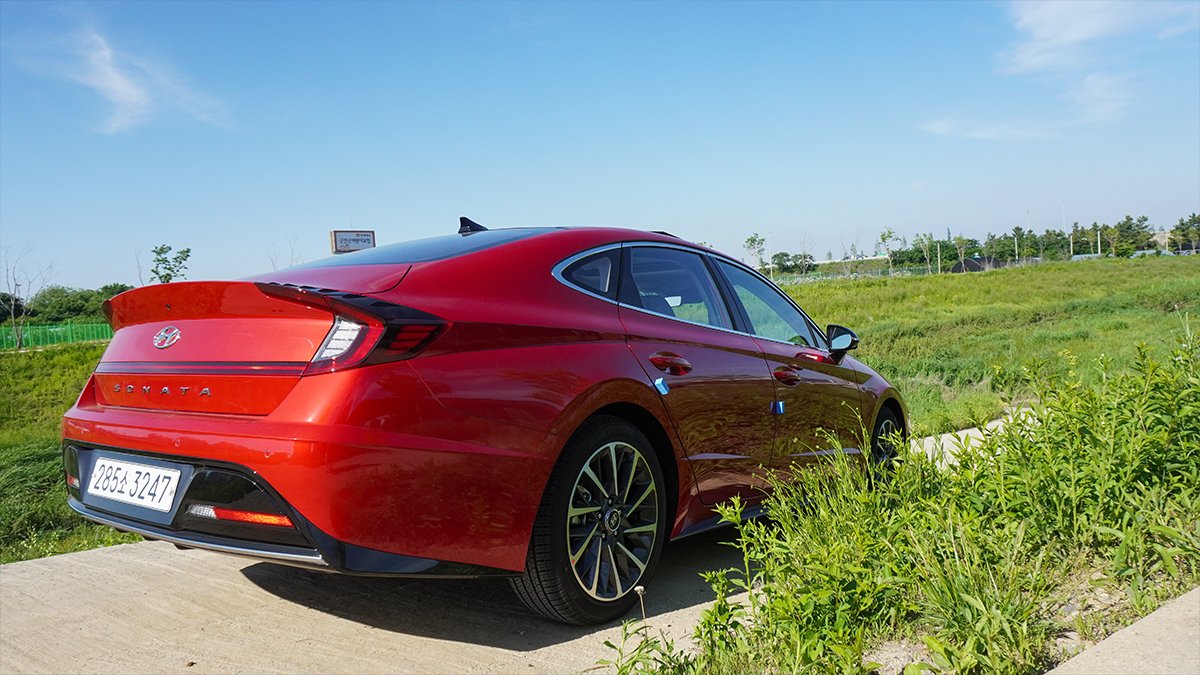 The Sonata and K5 differentiate themselves by different characteristics on the same platform. The Sonata, which I usually feel as a car owner of the K5, emphasizes the characteristic of a’family car’, so I think it is a model that anyone of all ages can enjoy without burden.

In particular, the most striking part of this Sonata was the design change through the model year change. Among the Sonata models, the 2.0 model, which is the most faithful to the basics, has been changed to a more sporty appearance by applying the Sensual design, but positive responses from many other consumers are expected. 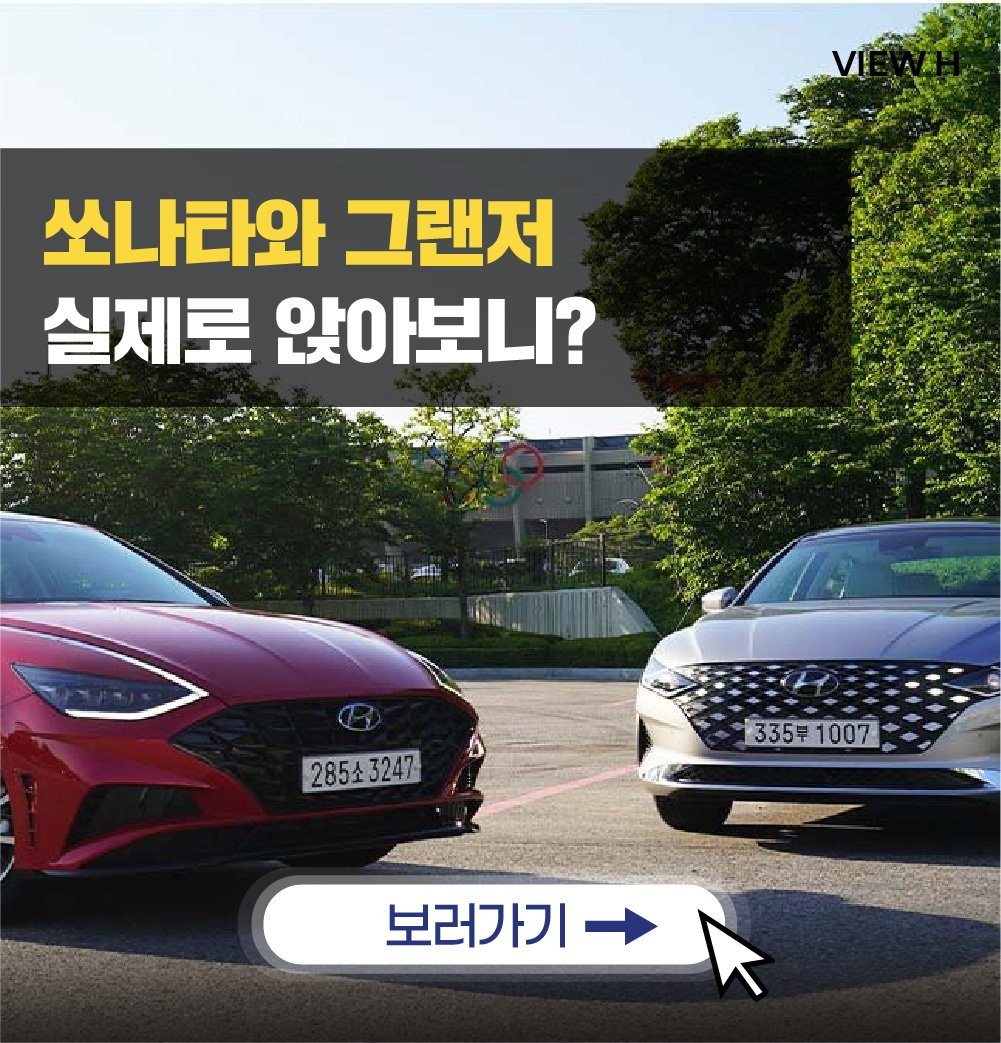 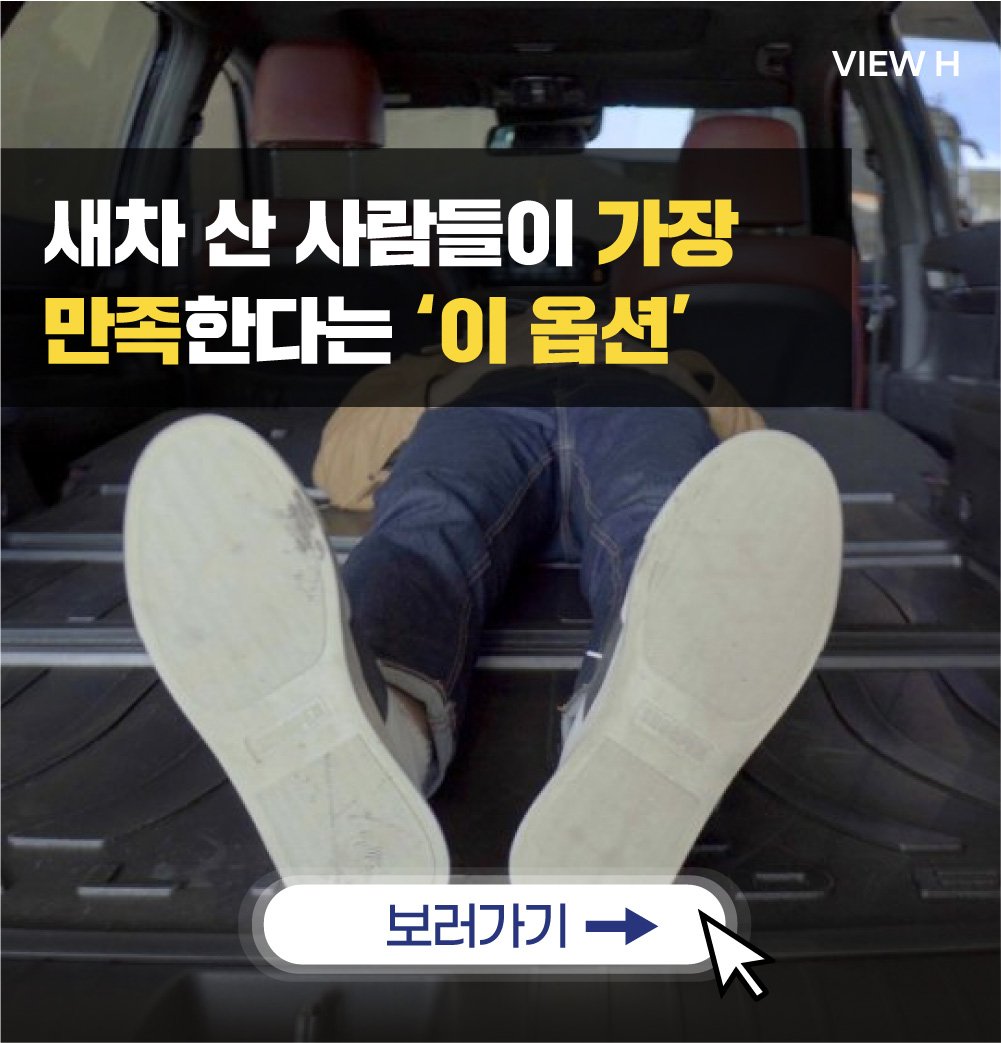