Skip to content
Warning: sprintf(): Too few arguments in /home/kienthuc/electrodealpro.com/wp-content/themes/fairy/candidthemes/assets/framework/breadcrumbs/breadcrumbs.php on line 254 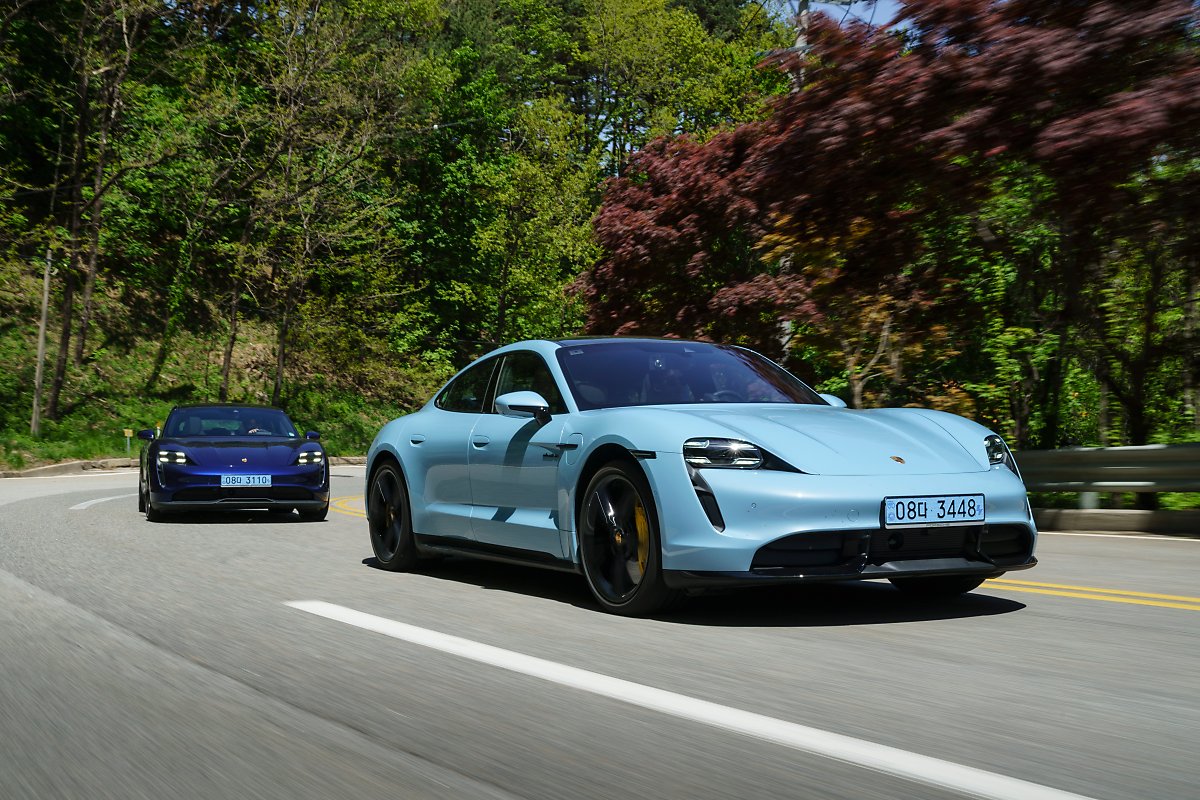 The Taycan 4S, Porsche’s first electric sports car, has a certified range of 289 km. It is also possible by adding an additional option,’Performance Battery Plus’. However, Porsche Korea prepared a long-distance test drive course of about 350 km in Yangyang, Pyeongchang, Sokcho, etc. in Goseong, Gangwon Province, for a total of 5 hours. 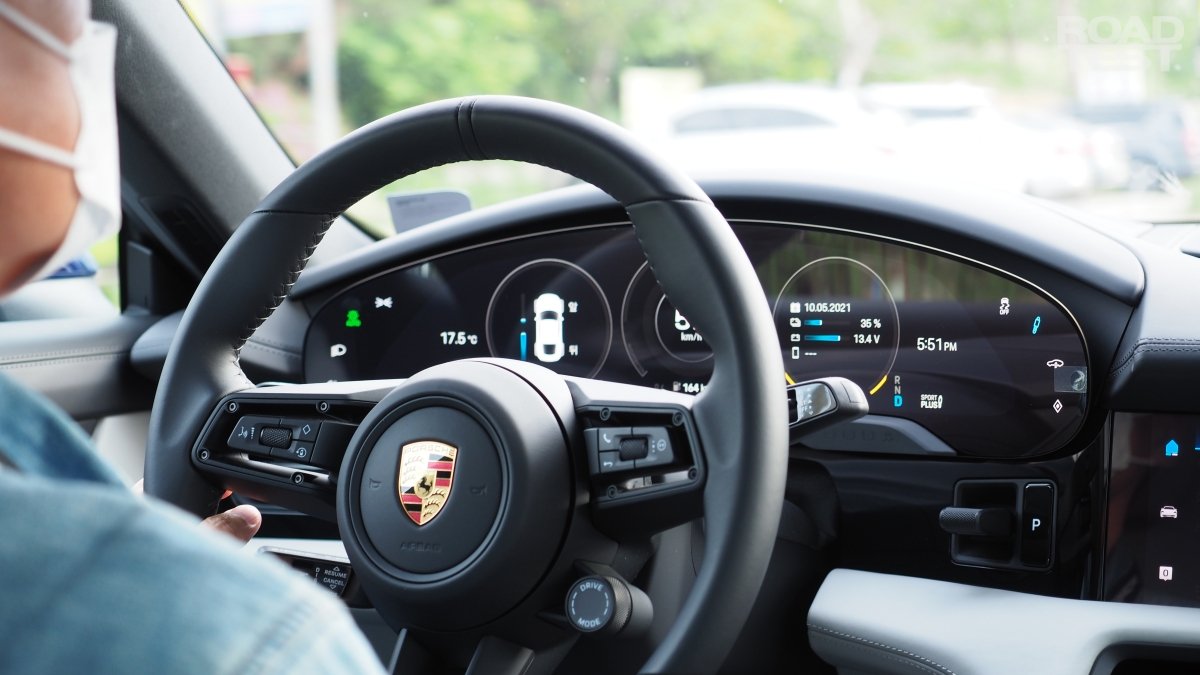 I am still in a negative position on electric vehicles. It’s not an ordinary story about range or charging time. From the standpoint of’Cha Deok-hoo’, electric cars are actually not so much fun. Of course, I can’t forget the feeling of acceleration when I first encountered an electric car. However, did you say that humans are animals of adaptation? As time passes, the intense sense of acceleration also becomes dull. I am in a quiet and comfortable car, but I missed the minute engine vibrations and exhaust sounds.

When the Taycan appeared, there wasn’t much inspiration except for the design. But when I got on this test drive, it felt different from an ordinary electric car. At first I thought it was because of the Porsche badge on the bonnet, but in the end, I concluded that “Porsche made the electric Porsche.” 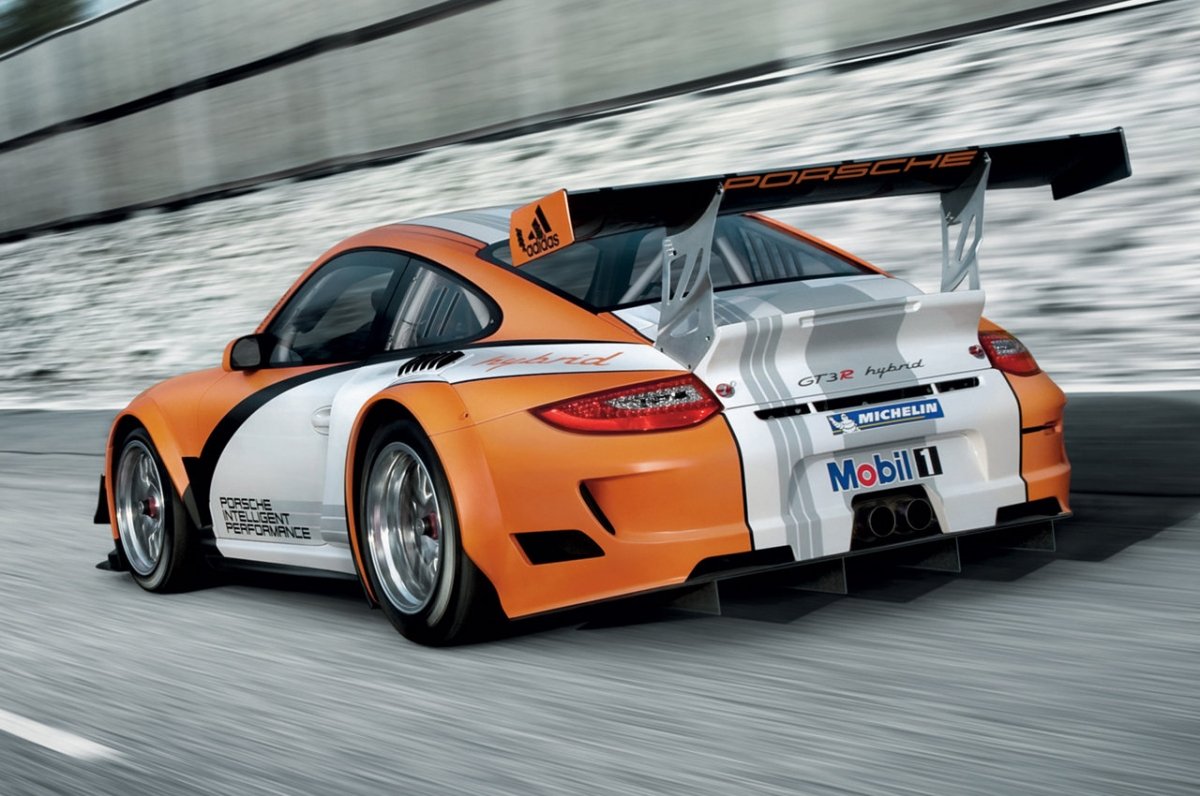 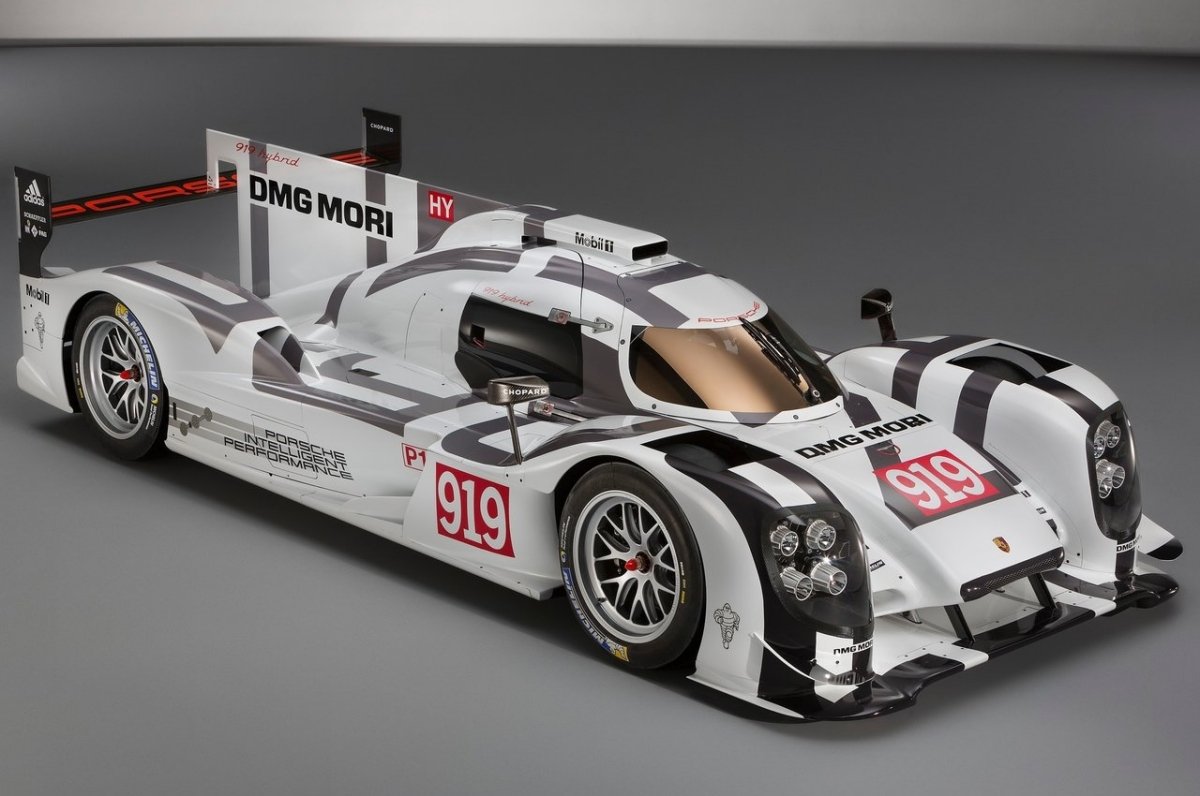 Four years later, in 2014, the 919 hybrid prototype model for the 24 Hours of Le Mans endurance race was introduced. In the first year, he didn’t get much results, but the following year, 2015, he won the championship for three consecutive years. After that, Porsche withdrew from 24 Hours of Le Mans. 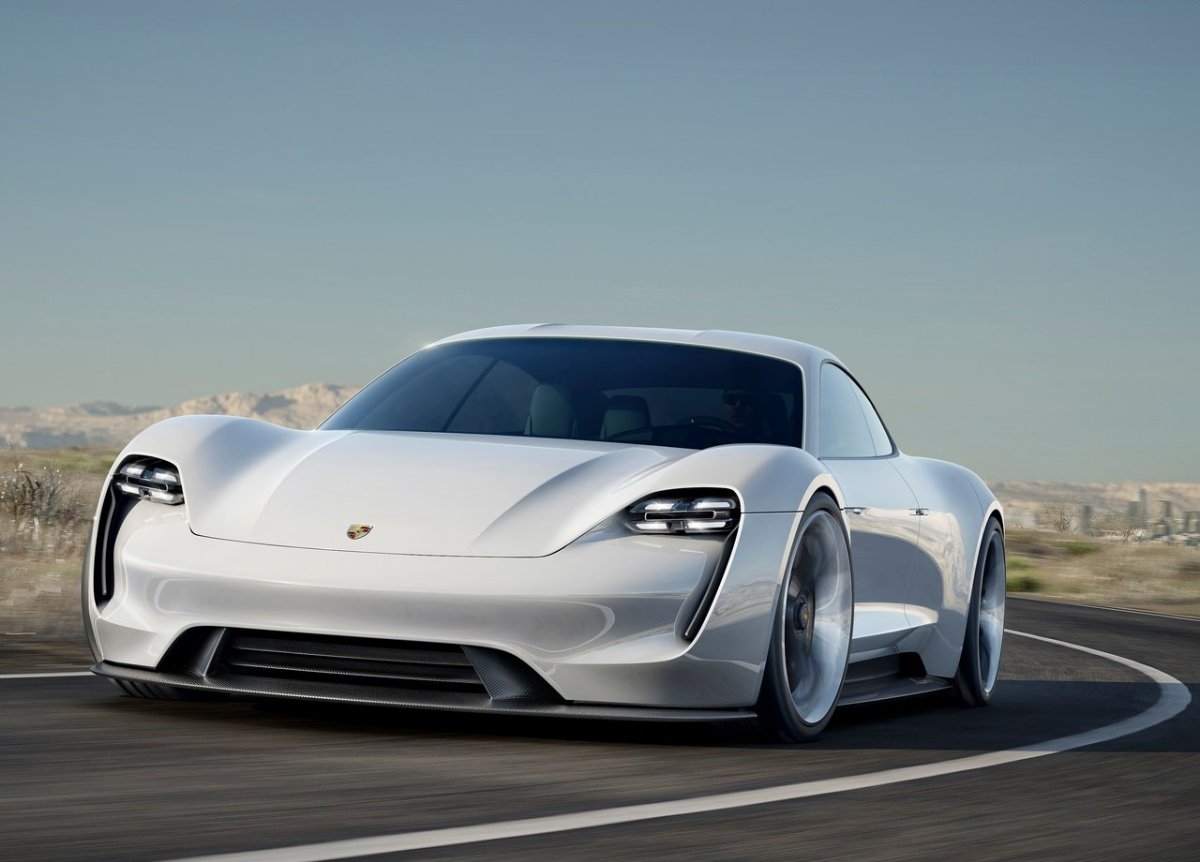 Meanwhile, in 2015, during the 24 hours of Le Mans, Porsche unveils its electric concept car Mission-E to the public. It looks similar to the Panamera, a four-door sedan, but Porsche emphasized that it is an electric sports car, saying it is the 911 of the’E-version’. Afterwards, the Taycan, the mass-produced type of Mission-E, finally appeared in 2019.

Somewhere between 911 and Panamera 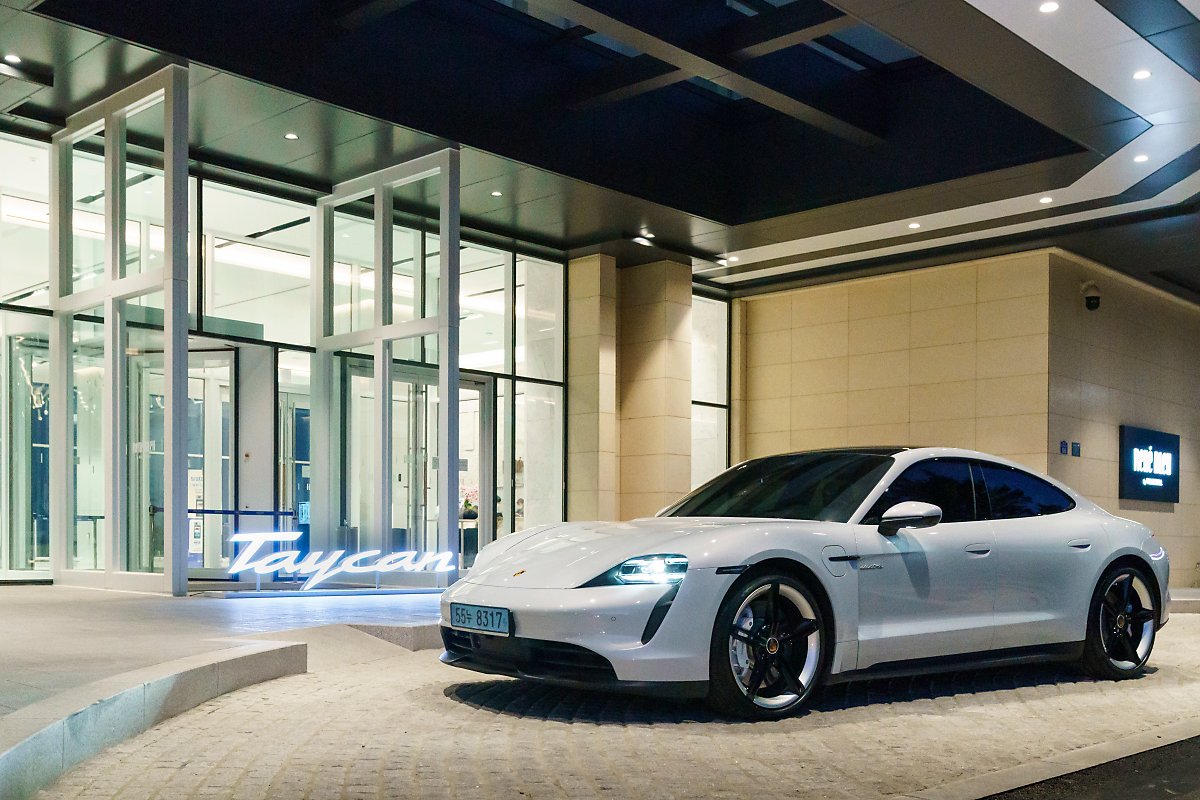 As it is a mass-produced car of Mission-E, there are many traces of it. As a matter of fact, the degree of freedom in design was high as it used a platform dedicated to electric vehicles. The lack of an engine made it possible to drop the bonnet line low, and thanks to this, the convex left and right fenders evoke the appearance of the 919 Hybrid. 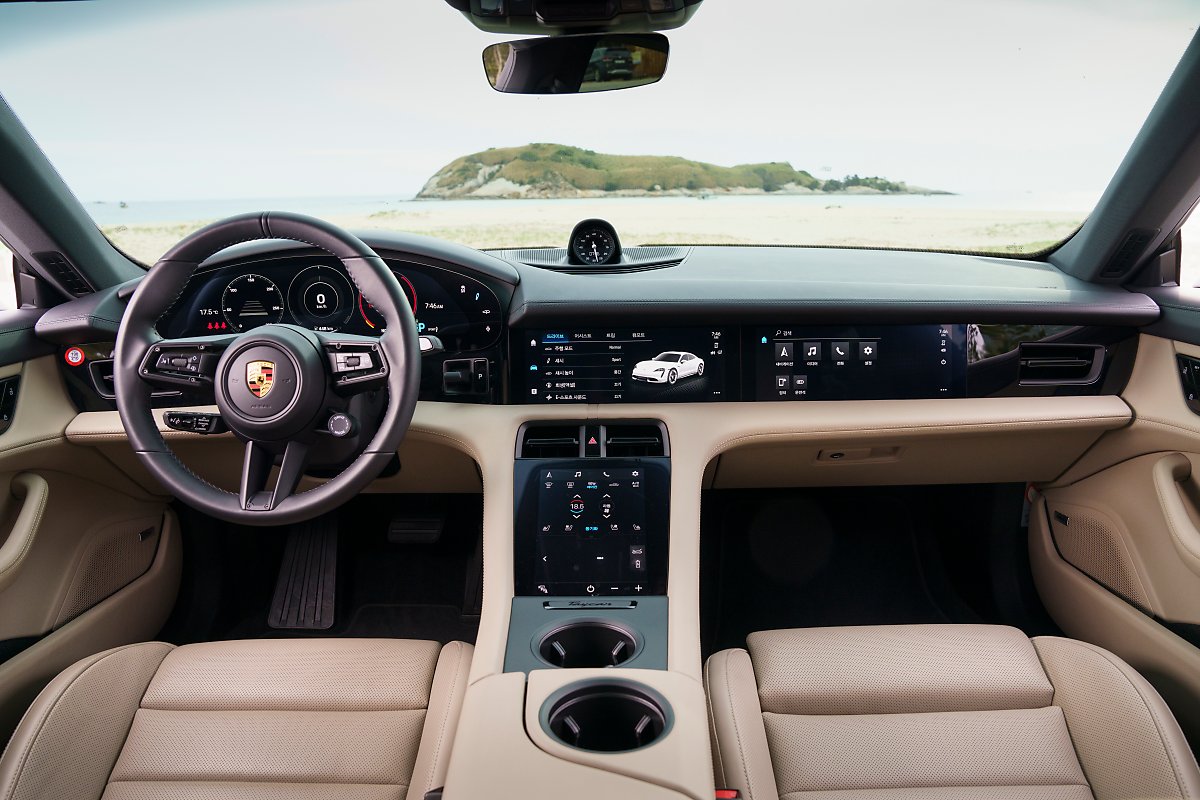 The cockpit I saw from the driver’s seat was really insignificant. Except for the power button, gear lever, and emergency lights, they all have displays. The gear lever was made small on the right side of the instrument panel, so it looked more shabby. Pressing the power button on the left side of the steering wheel changes the story a little. There are 5 displays in the interior of the Taycan. Excluding the air conditioning system panel in the rear seat, the four displays turn on and it feels completely new. 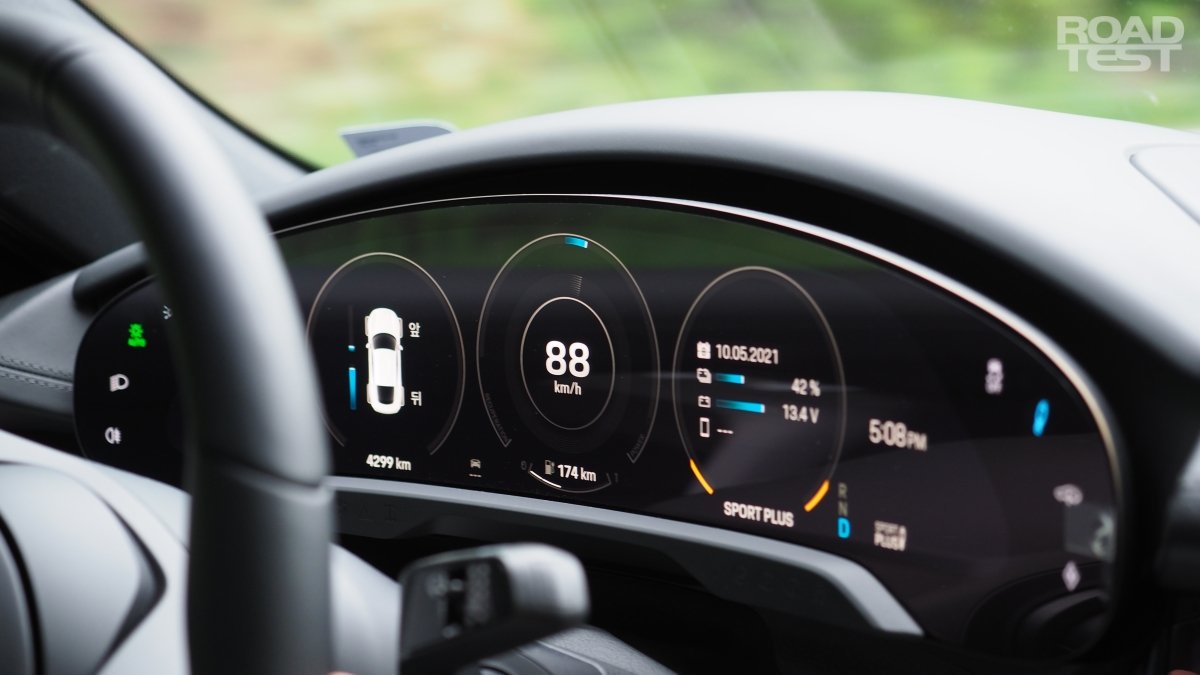 The Taycan weighs more than 2 tons (tons) with the Performance Battery Plus option added. Among them, the weight of the battery is 634kg, which accounts for more than 30%, and for the center of gravity, the battery is located at the lowest part of the body. For this reason, the roof is raised to secure space for the passengers’ head, but Porsche did not put batteries under the first row of seats to keep the Taycan’s wide and low proportions. Thanks to this, the seat position of the driver’s seat and the height of the roof were lowered as much as possible, and space for the back seat passengers was able to be prepared. 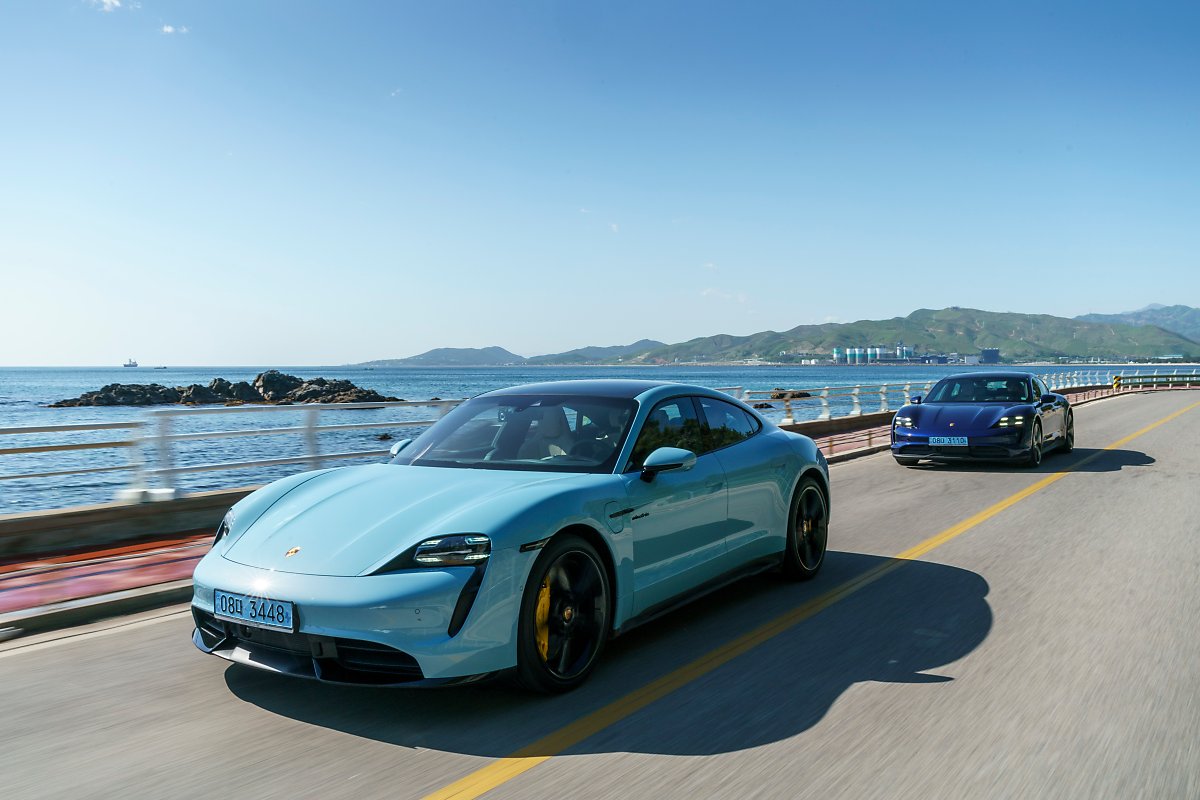 Before the test drive, in the time to summarize the schedule, Porsche said, “This test drive event is not a place to promote the sportiness of the Taycan, but a concept where you become the owner of the Taycan and travel long distances. Please enjoy it leisurely.” Honestly, I doubted whether the mileage of more than 350 km would be burdensome.

I turned on the power at the starting point and checked the battery condition first. The remaining battery capacity is 99%. However, there was a difference from the approved driving distance that I went to know. The remaining driving distance displayed on the instrument panel was more than 400 km. Taycan was confident that he could run more than 410km even if he turned the drive mode and entered the’Sports Plus’ mode.

To start with, I thought the Taycan was the only electric car that could be recommended to consumers who wanted a sports car. Sports cars don’t just show off their output. Personally, I think the three things that excite the driver best are the exhaust sound, the feeling of acceleration, and the feeling of shifting, but the Taycan replaced it with an electric powertrain. 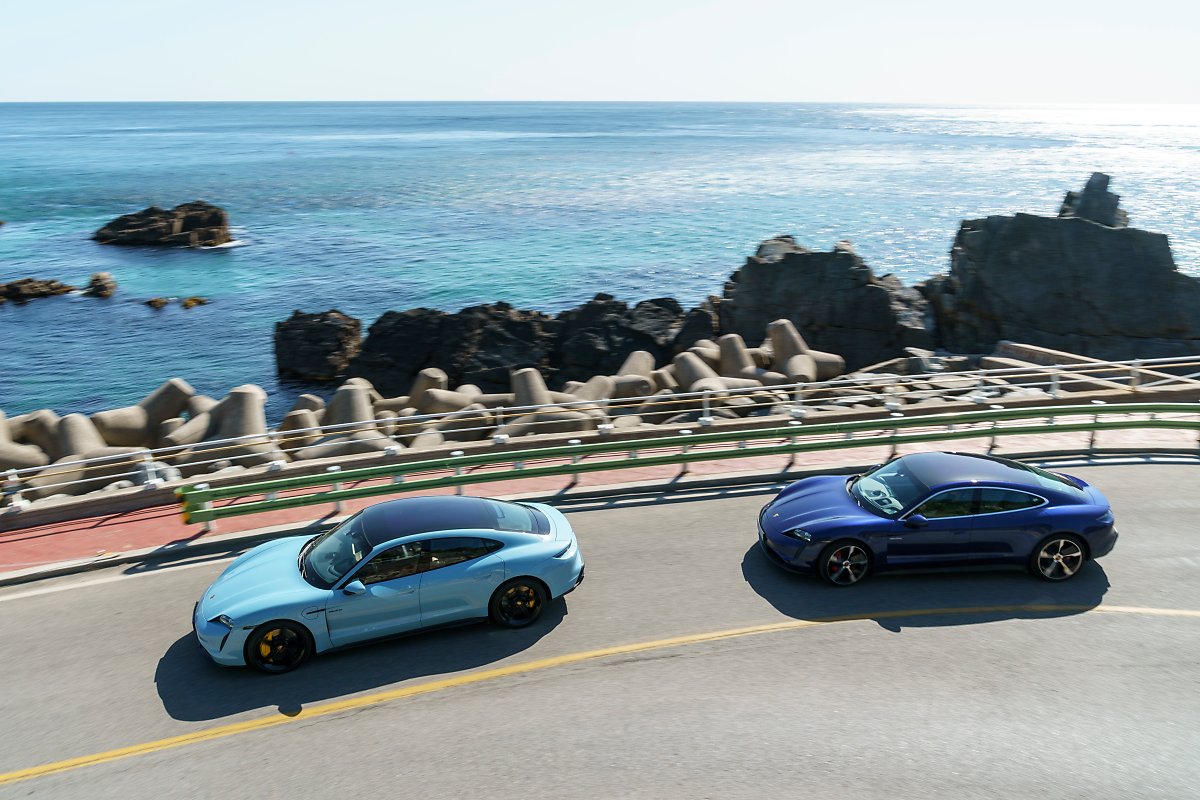 The Taycan’s unique’electric sports sound’ kept me from getting bored throughout the drive. Electric sports sound is a system that artificially amplifies the sound of a motor. Often, it is used only with electric motors to notify pedestrians at speeds of 30 km/h or less. However, Porsche relieved the boredom of the electric car with this amplified sound. It is often described as the sound of a spaceship flying like a rush, but it is said that it was actually made in collaboration with the movie’Star Wars’ team. A subtle sound that I had not heard from the winding course resonated.

One of the great charms is the 66.3kg‧m of torque along with an unfamiliar sound. Electric vehicles can release the maximum torque of the motor at any time, but the Taycan does not emit it at once. It increases the power steadily as if the engine raises the rpm. Thanks to this, unlike other electric cars, it maintains the feel of the engine and lowers the sense of heterogeneity.

The same is true when decelerating. Regenerative braking to collect wasted energy when stopping is set to feel similar to engine brake when the accelerator of an internal combustion engine is released. ‘One-pedal driving’, which can slow down only with the accelerator pedal, is not possible, but the power gained from regenerative braking is not too short. As I passed the Daegwallyeong mountain road, I was able to charge about 3% of the battery by reducing the amount of excel as much as possible and actively using regenerative braking with a shallow brake.

Another attraction of the Taycan was found in driving on the highway. It is the first two-stage mission to be installed in an electric vehicle. As described above, the electric motor can produce the maximum torque at any time, whereas the internal combustion engine must reach a certain rpm for the maximum torque to burst. The gearbox is the gear to match this as much as possible.

Electric vehicles have the characteristics of lowering their fuel consumption as they go at higher speeds. The Taycan solved this by pairing a rear-wheel motor with a two-speed transmission. In addition, it is set to accelerate quickly at low or high speed, whenever you apply force to the right foot. As you cross each stage, a slight shift shock stimulates the driver further.

The base price of the Taycan 4S starts at 145.6 million won. Of course, we have prepared a variety of options, like an optional Porsche. Electric sports sound is also an option, and the price is 600,000 won, which is cheaper than expected. Performance Battery Plus is also an option that requires an additional 8.1 million won. You can increase the battery from 79.2 to 93.4㎾h and increase the motor output a little bit. 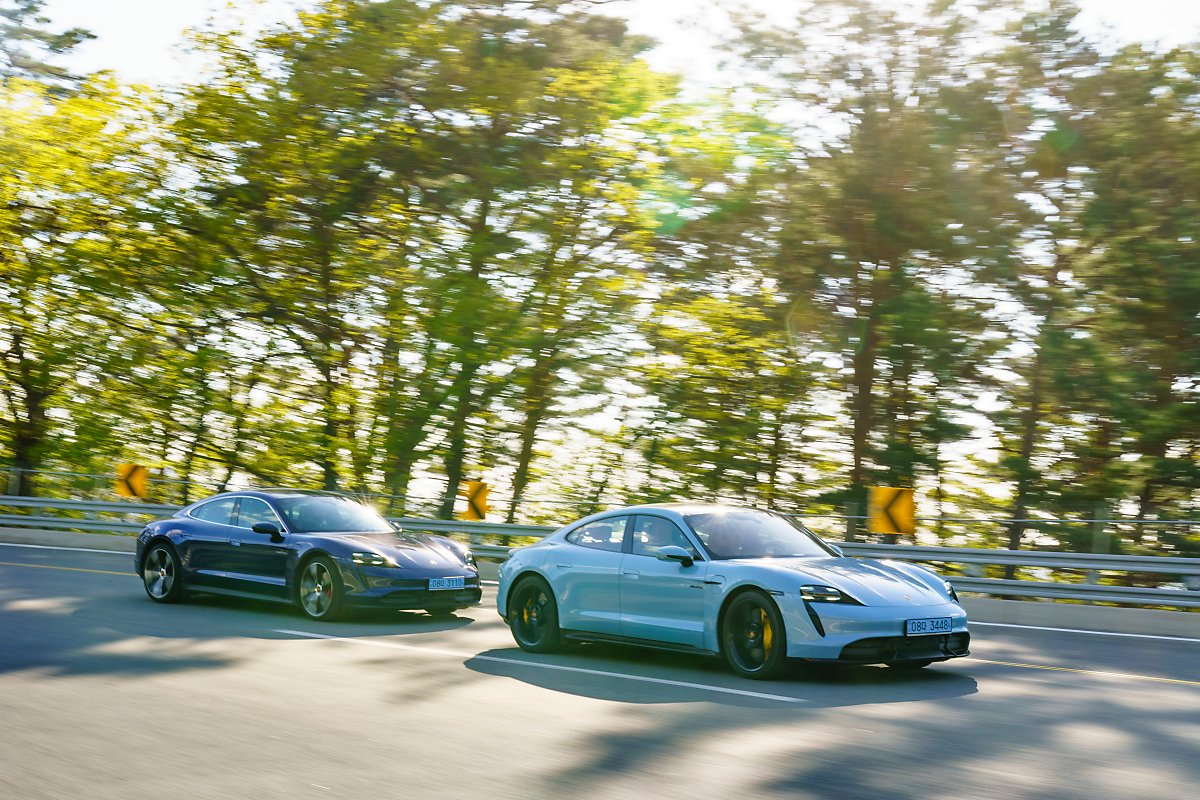 The method of authenticating the mileage of electric vehicles varies widely as the environment of each country is different. In the case of the Taycan 4S with the Performance Battery Plus option, the certified distance by the Ministry of Environment in Korea is 289km, while the WLTP (International Standard Emissions Test Method) standard is 463km, showing a big difference.

In this test drive, I didn’t run fuel at all. When it’s hot, I turn on the air conditioner’full’, and when I enter the mountain trail, I open the window wide to breathe fresh air. As it is a winding course, acceleration and deceleration were performed frequently. Although it is a bad condition for an electric car, about 30km or more of the remaining battery remained even after all the driving was completed. In particular, another reporter from the same group deliberately made a radical drive with the thought of “I will run out of batteries”, but in the end, the race was completed without any problems.

Of course, due to the wider regulations, there should not be an accident with the actual mileage shorter than the official mileage, but I think that the smaller the error between the two, the higher the reliability. We hope to increase credibility so that consumers will not be confused.

good
① Porsche badges are not given to anyone.
② Longer mileage than the certified mileage even in extreme driving
③ 4-door sedan with good ratio 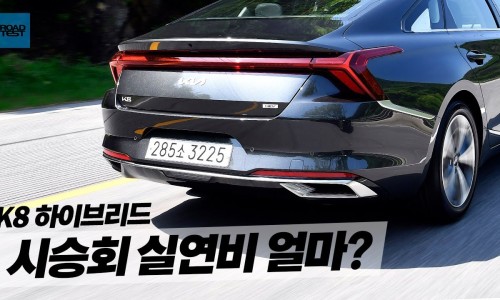 How much is the actual fuel cost of the test drive? Kia K8 Hybrid Driving Review
Road test went to the Kia K8 hybrid test drive. It is the K8 that became a hot topic at the time of its launch due to its cool design in the era of SUVs. Fuel economy is also achieved through the hybrid version. Reporter Lee Dong-yeop discloses the number of actual fuel costs recorded at the test drive. #Kia K8 #k8 hybrid #k8 hybrid fuel efficiency
www.youtube.com 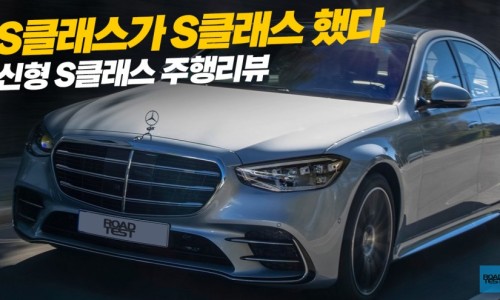 What happens when the S class is the S class! S400d driving and S580 rear seat review
Road test | It is the return of the king. The flagship sedan’s strongest S-Class has appeared in the domestic market with a new look. This time, reporter Seo Dong-hyun grabbed the steering wheel of the S400d 4matic and, except for Maybach, climbed into the rear seat of the top trim S580. Let’s see what it might have been like! #New S Class #S Class #S Class Test Seunggi
tv.naver.com