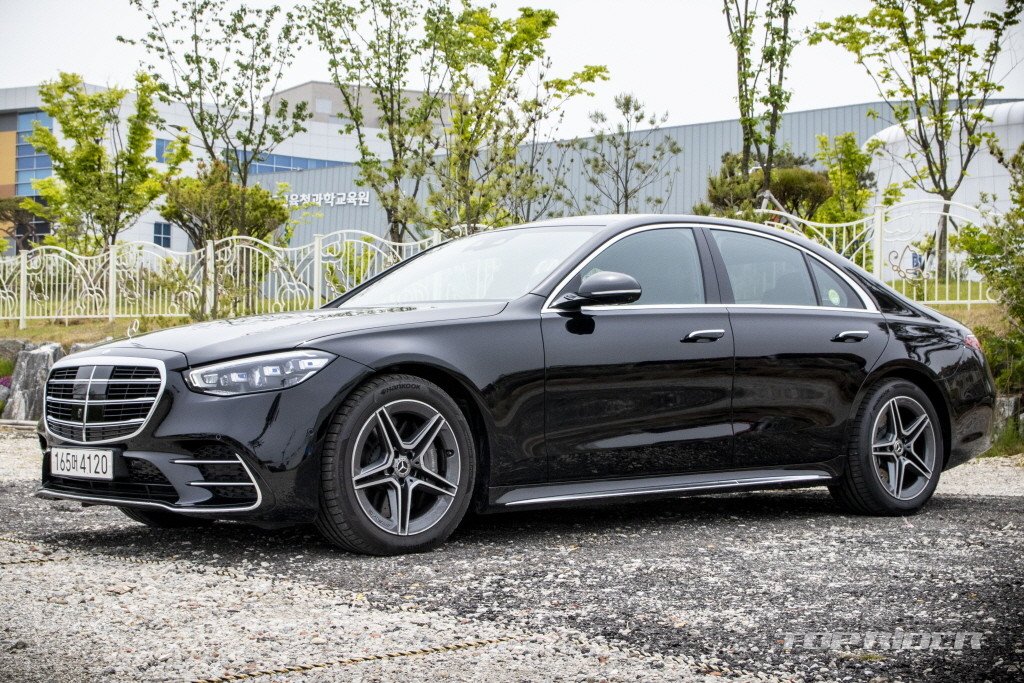 Test-drive the new Mercedes-Benz S-Class 400d 4MATIC. The new S-Class is characterized by the exterior of Mercedes-Benz’s new family look and the interior with digitalization, splendor, and luxury. In particular, the heavy but agile driving performance, a solid ride, and the quietness of a gasoline engine are the advantages. Poongjeoleum is unfortunate. 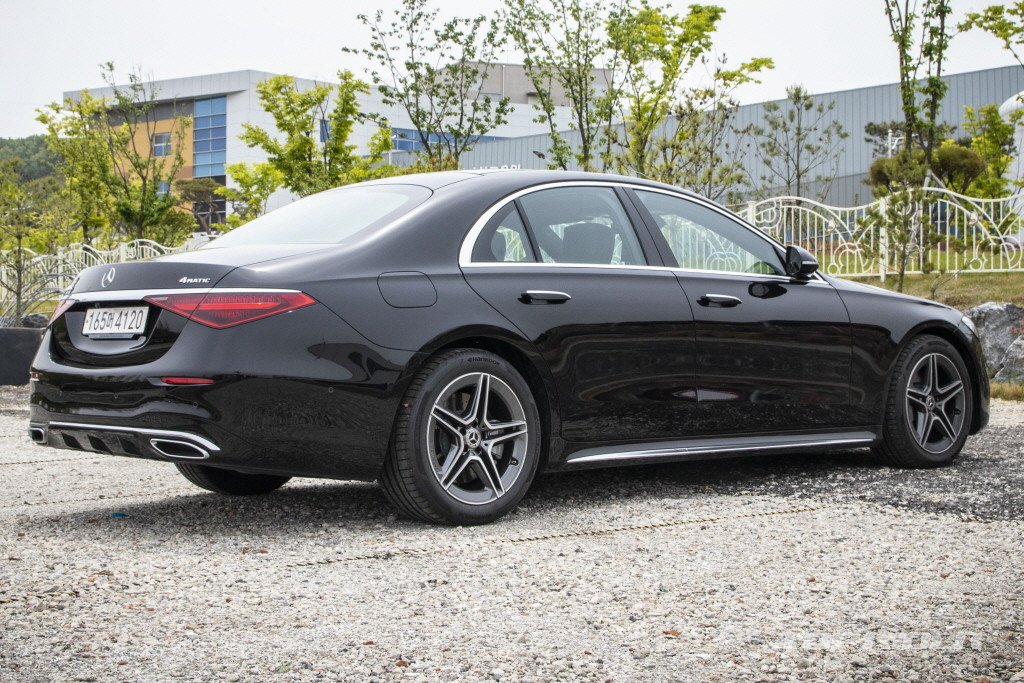 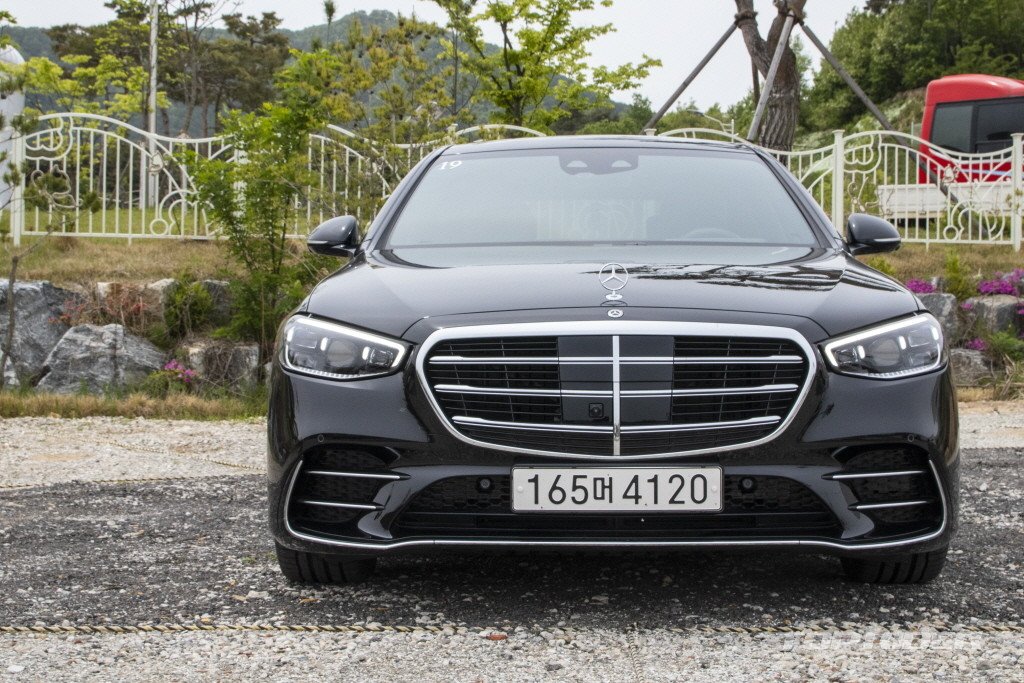 The new S-Class is built on the basis of a new aluminum hybrid body, which improves weight reduction and collision safety. The S400d 4MATIC comes standard with an AMG line exterior package. The wing design of the AMG front apron is applied to the front and the AMG chrome fin rear diffuser is applied to the rear. 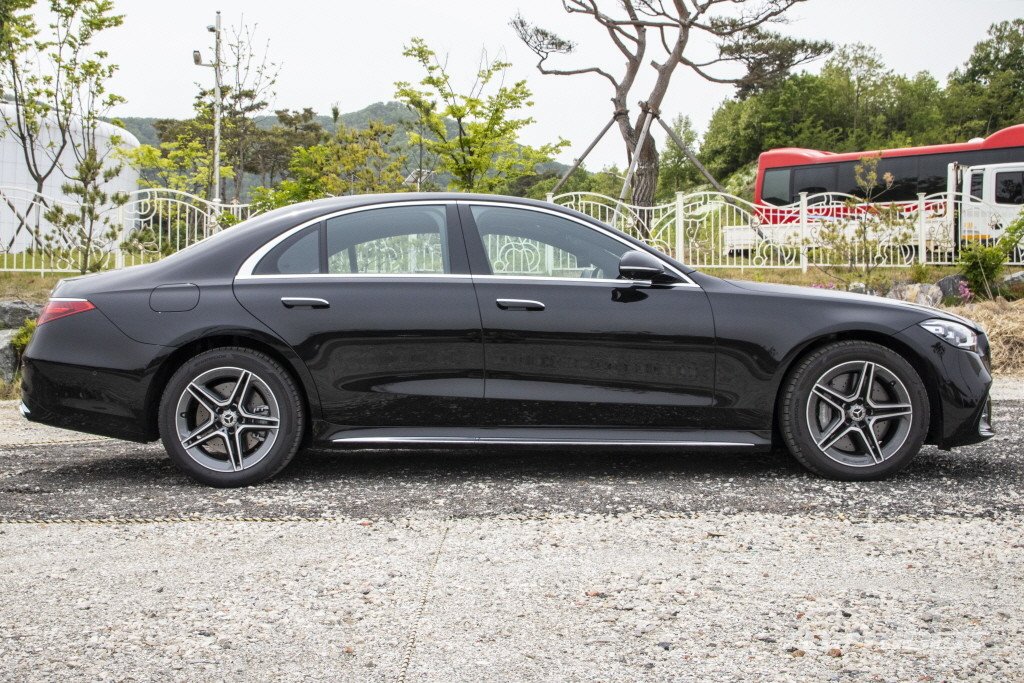 The digital light first installed in the new S-Class consists of a projection module with more than 1.3 million pixels per headlamp and 84 multi-beam LED modules. The digital light changes the irradiation angle by itself by obtaining information from a navigation system or the like. When going downhill, lower the irradiation angle to ensure visibility. 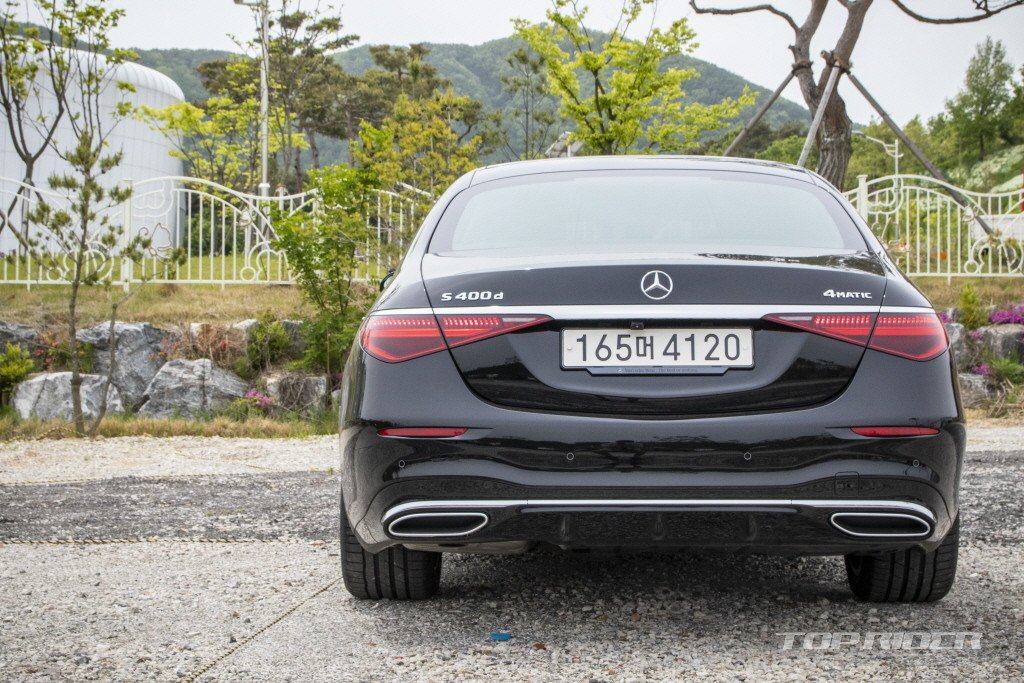 A short front overhang, a long wheelbase, and a balanced rear overhang create a perfect lateral proportion. The newly applied flush door handle protrudes when a key is detected near the vehicle or when the door handle surface is touched. When the vehicle starts or the car door is locked, it is automatically stored inside the vehicle body. 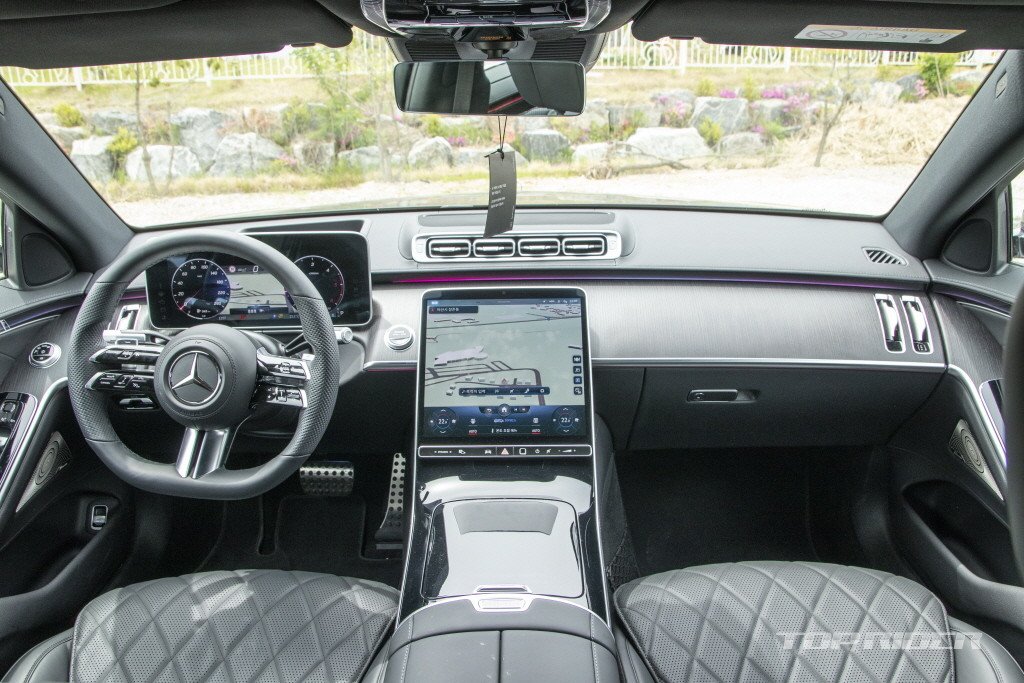 The rear lamp, which has been changed to a horizontal shape that penetrates the trunk, has a sequential turn indicator function. The width of the rear part is emphasized with a chrome strip. In the interior, digital and analog are in harmony. The 12.8-inch OLED center fascia display has excellent visibility regardless of the viewing angle and light conditions. 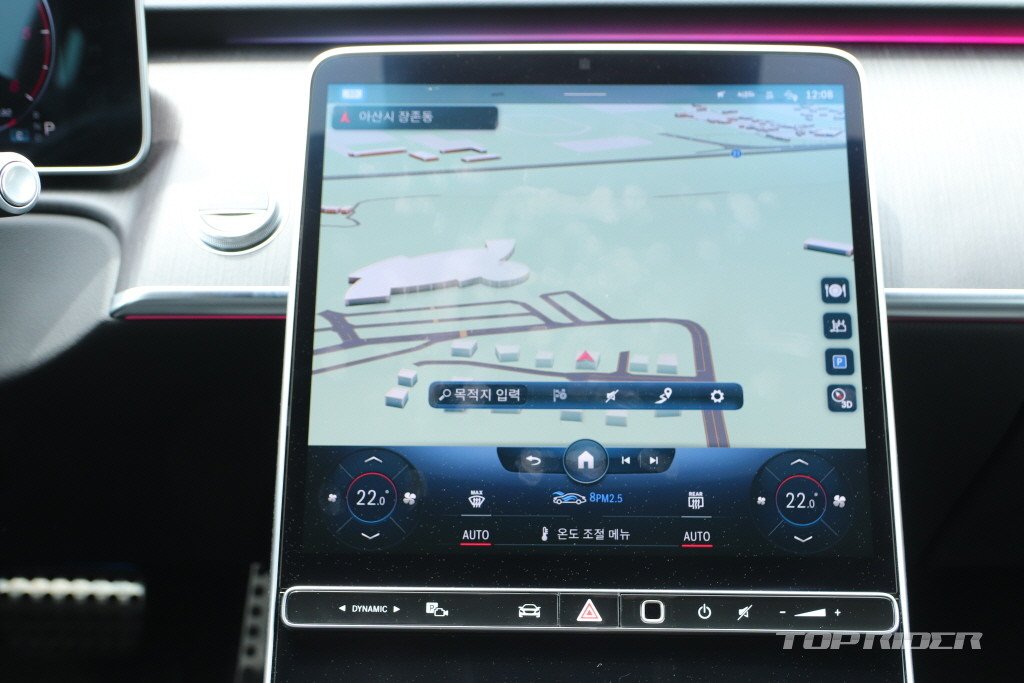 The air conditioner integrated into the center fascia display is intuitive to use. The 12.3-inch 3D digital instrument panel supports various styles of graphics. The built-in camera monitors the driver’s eyelid movement and sounds a warning sound when drowsy driving is detected. Seat adjustment is a capacitive touch method. 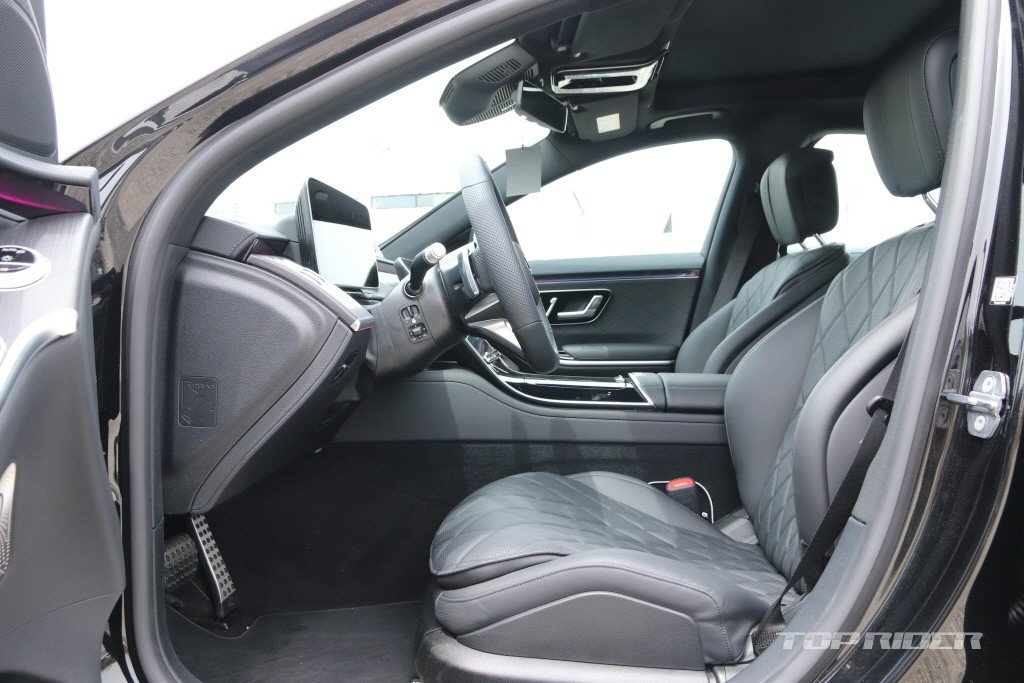 The standard wheelbase model S400d 4MATIC has an 81mm increase in wheelbase compared to the previous model. The second row legroom is enough for an adult 180cm tall even if the first row is set leisurely. The headroom space is also large. The active ambient light can create a variety of atmospheres with 64 colors. 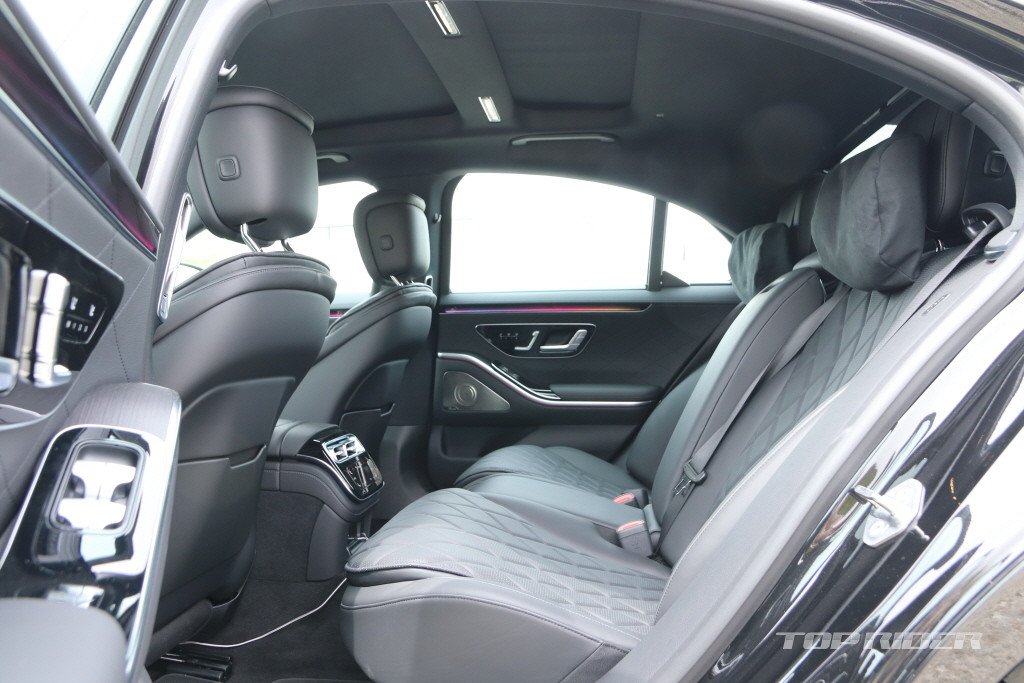 The S400d 4MATIC is equipped with a 3.0-liter in-line 6-cylinder diesel engine and a 9-speed automatic transmission. The maximum output is 330 horsepower and the maximum torque is 71.4 kgm. It takes 5.4 seconds from standstill to 100km/h. The top speed is 250 km/h. The combined fuel economy is 11.4km/ℓ. The quietness of diesel engines is comparable to that of gasoline engines. 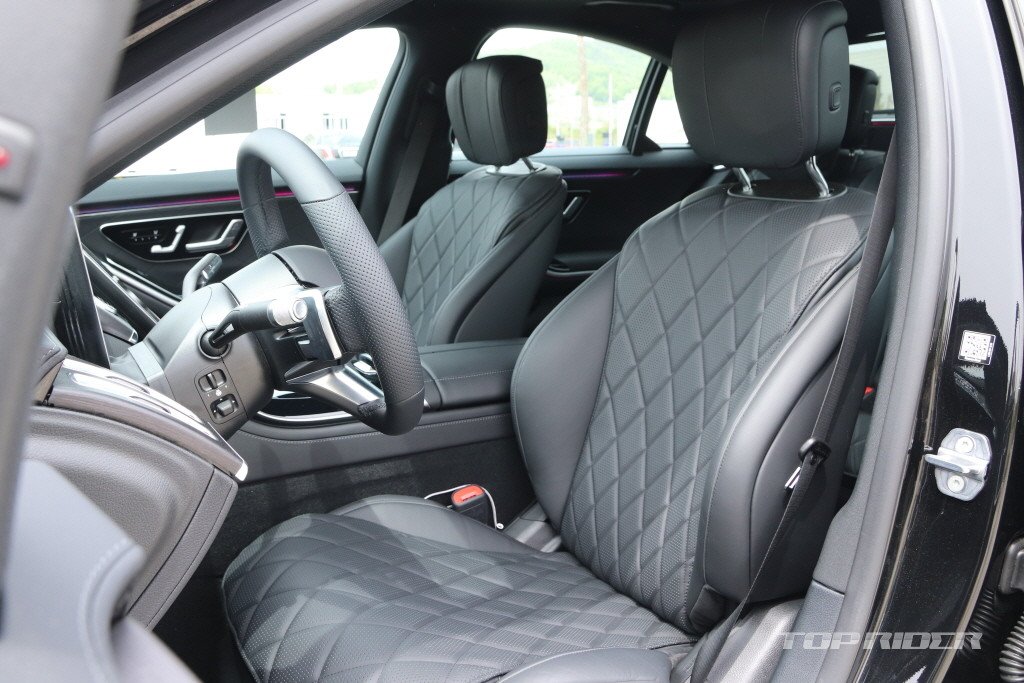 It is difficult to notice that it is a diesel engine unless you check the engine sound from the outside of the vehicle. Even if you press the accelerator pedal deeply, the quiet engine sound is maintained. The’sweet’ noise characteristic of a diesel engine during acceleration was also blocked to a perfect level. There is also less engine vibration from the accelerator pedal and steering wheel. 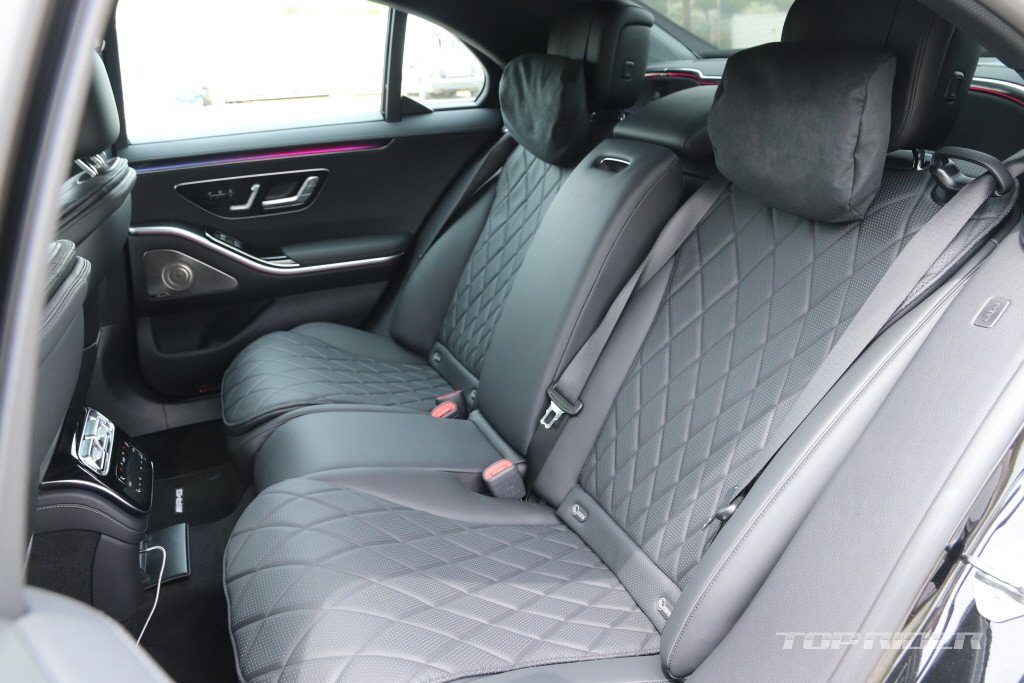 The initial acceleration of the S400d 4MATIC is light thanks to the maximum torque exerted in the 1200~3200rpm section. The maximum output is from 3600rpm. It is difficult to feel the lack of engine power not only in urban driving, but also on automobile-only roads and highways. The momentary punching force makes you forget the class. 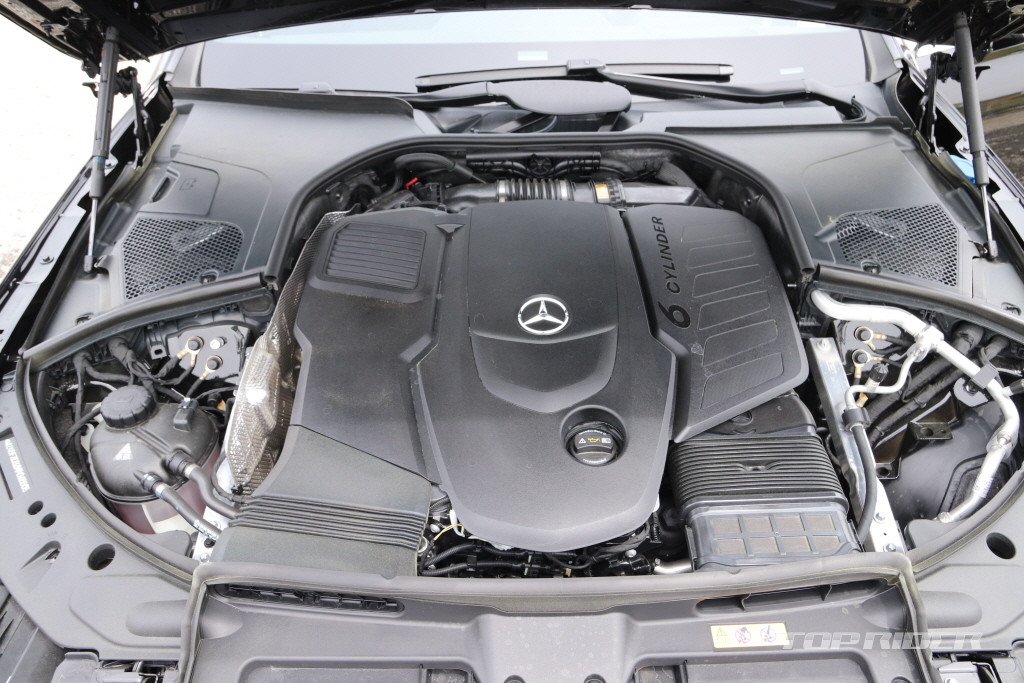 It also has excellent punching power when re-accelerating to overtake the vehicle in front at more than 100km/h. Unlike a four-cylinder engine, where the engine’s power feels somewhat insufficient as the vehicle gains speed, power is transmitted steadily. The shift feeling of the 9-speed automatic transmission is as smooth as that of a continuously variable transmission, and the response speed is fast.

In particular, in the sports mode, a shift shock that seems to push back and forth is produced when shifting to the manual mode in the high-rev section of the engine approaching the fuel cut. Air suspension is standard for the new S-Class. The ride comfort has been strengthened compared to the previous model. The softness as if floating on the water was maintained. 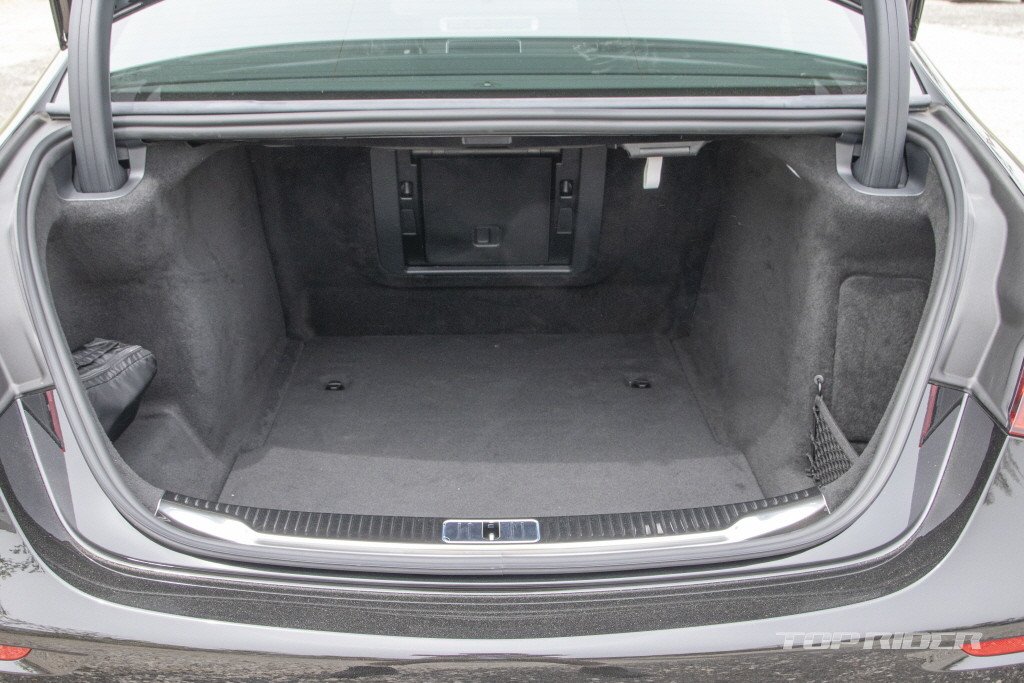 At low speeds, the soft and comfortable ride unique to Mercedes is emphasized. When passing through uneven road surfaces, bumps, and speed bumps rather quickly, the soft sensation peculiar to air suspension is delivered. Do not give unnecessary road shock to the driver. Conversely, in high-speed driving, hold the body firmly. 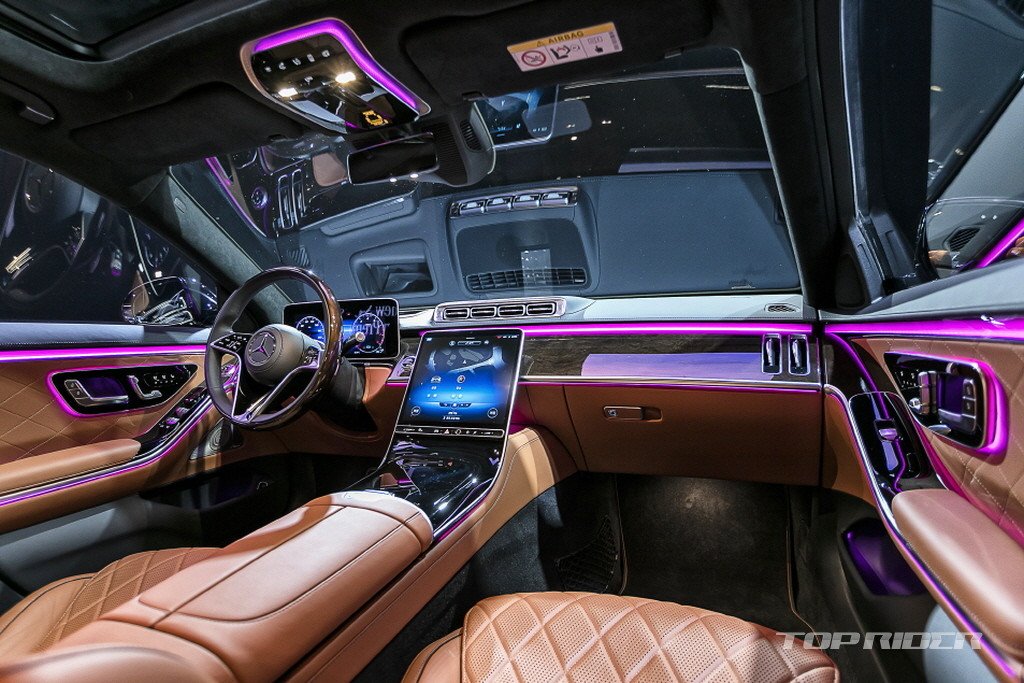 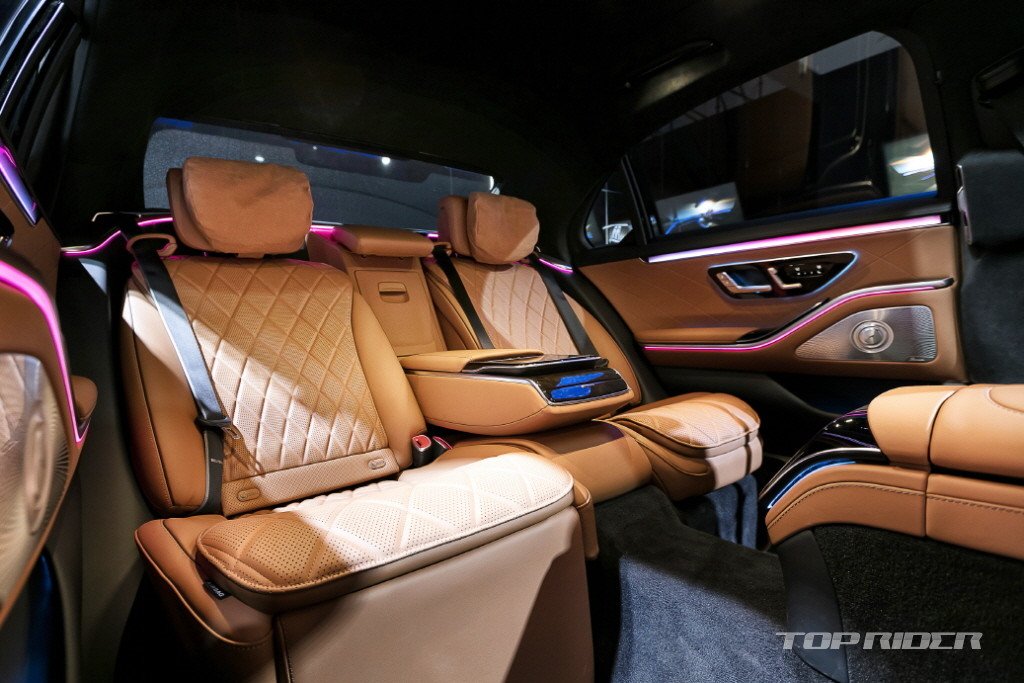 The stability of high-speed driving is also Mercedes. Air suspension lowers the garage by itself as the vehicle speed increases. It is so stable that it is difficult to feel the sense of speed unless you check the speedometer with the sense that the vehicle body sinks low to the ground. It is a large sedan that is over 5000mm, but it has good cornering performance. 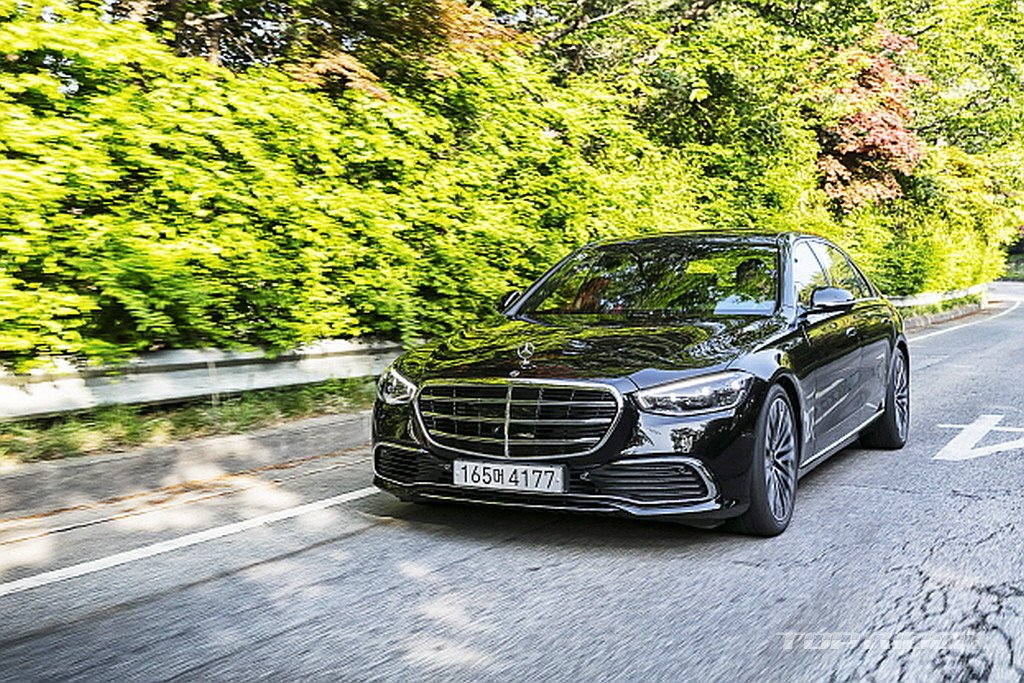 In continuous corners and gentle high-speed cornering, there is little rolling of the body left and right, enabling fast and stable driving. It has a strong tendency to dig inward when entering a corner. Unlike high-speed driving that felt heavy, the body feels light in corner driving. It is a sense of running while holding onto the road surface. 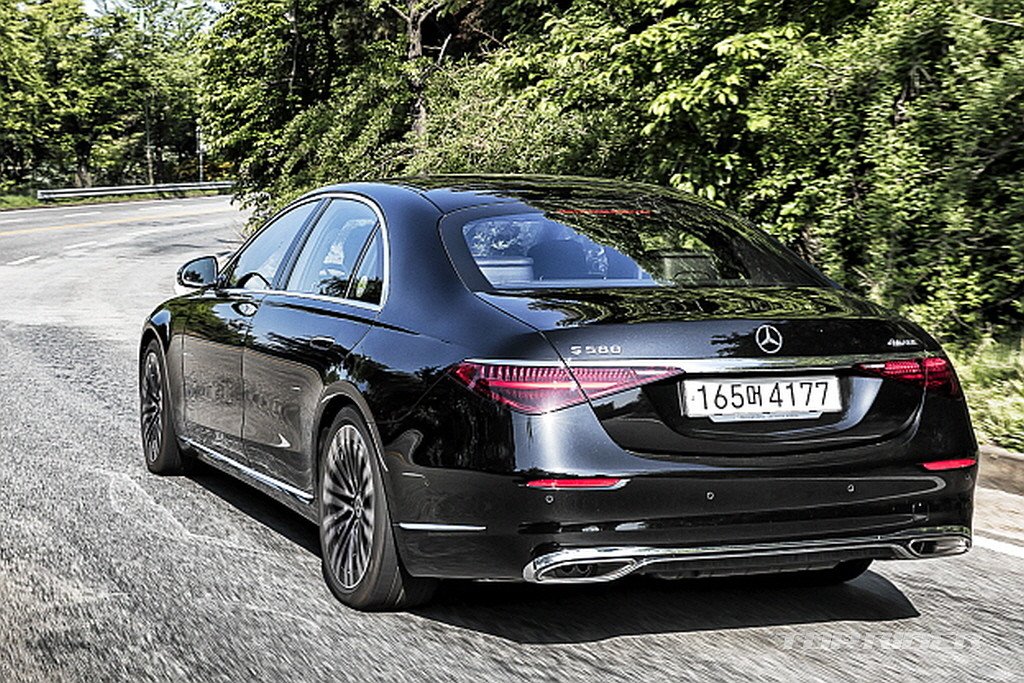 The brake pedal is a smooth setup compared to other Mercedes cars. No strong braking force is applied unless you press the brake pedal deeply. The driving assistance system of the new S-Class has been further upgraded. Lane maintenance assistance, unlike the previous one, drives in the center of the lane through steering wheel control. 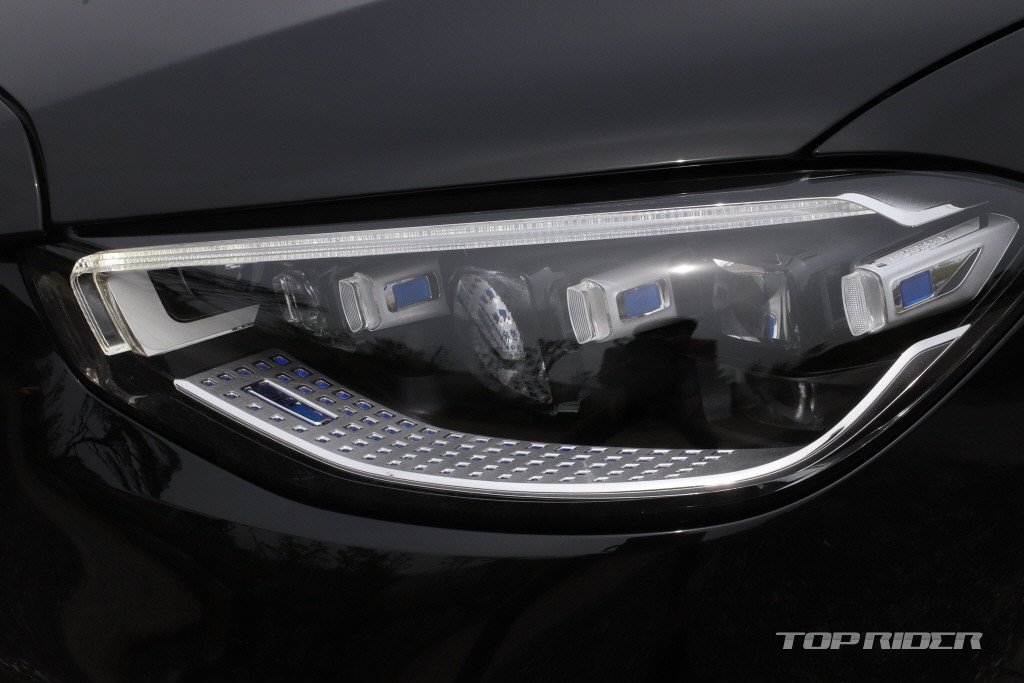 In the past, the vehicle was moved inside the lane with brake control. In addition, a radar on the front side has been added, making it natural to respond to situations where the vehicle in front of you is interrupted when using adaptive cruise control. The high cumulative fuel economy is an advantage of the diesel sedan. Accumulated fuel economy of 11.9km/ℓ was recorded in severe test driving. 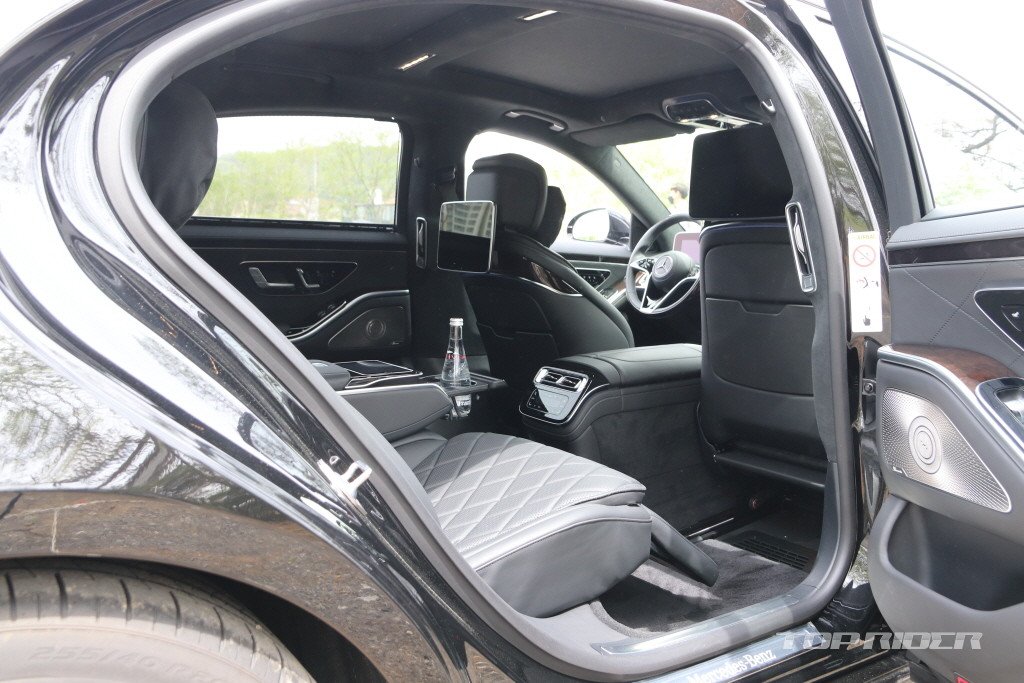 The new S-Class cuts the noise from the lower body that rises up the road to a level close to perfection. Even the sound of iron that can be heard when passing through irregularities is not heard. However, it is unfortunate that the wind noise flowing through the A-pillar at a speed of 80km/h or higher is similar to that of the E-class, and there is no difference. 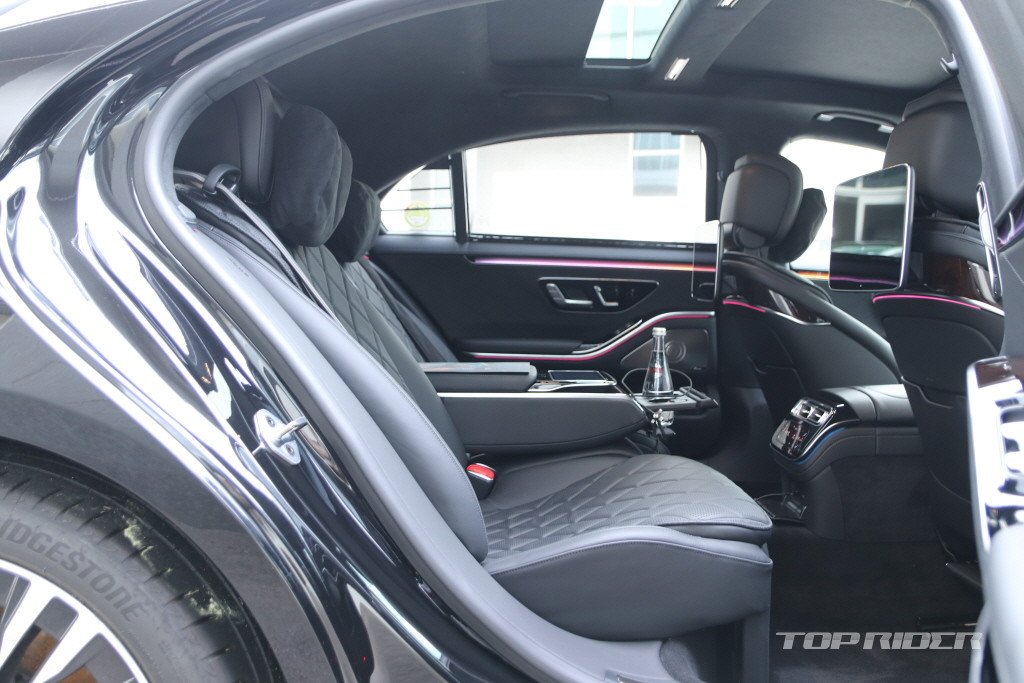 The rear seat test drive was conducted with the S580 4MATIC. The passenger seat can be moved forward by up to 37mm, and a shopper package that can adjust the angle of the backrest up to 43.5 degrees is applied as standard. The second row ride is smoother than the driver’s seat. It is difficult to feel even a small shock, and the wind noise is less.

If you move the passenger seat to the maximum, you can extend your legs 180cm tall. Consumers weighing more than 185 cm are expected to touch the passenger seat. The second row seat supports various massage functions. The new S-Class proved the value of its name with the merchandise that satisfies all passengers.

Grandeur Full Change Launch Next Year, Palisade Sonata F/L Coming
Hyundai Motor Company is planning to launch bold new cars in 2022. Through an overseas investment briefing, Hyundai Motor Company announced that it will release the Granger Full Change, the Palisade part change, and the Sonata part change in 2022. In particular, according to the industry, the Grandeur full chain…
www.top-rider.com 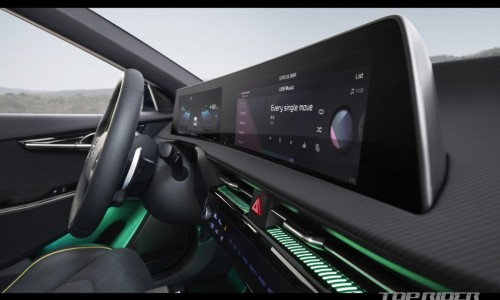 Electric vehicle EV6 unveils real vehicle in UK, colorful lighting’eyes’
Kia’s UK subsidiary disclosed the actual vehicle and price of the EV6. Unlike domestic specifications, the British EV6 is sold as a single long-range model with a battery capacity of 77.4kWh, and the price starts at £4,895 (about 64 million won). UK customer delivery this year ha…
www.top-rider.com 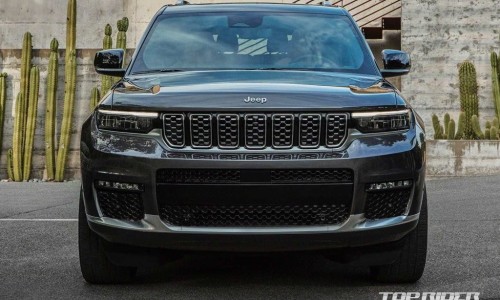 Jeep Grand Cherokee ahead of domestic release, cheaper than GV80 in US
The US price of the Jeep’s new Grand Cherokee L has been revealed. The new Grand Cherokee L is designed in a style that is magnificent on the inside and outside, and it is the first model to have three rows. You can choose the V8 engine based on the V6 engine. The price is 3,69…
www.top-rider.com 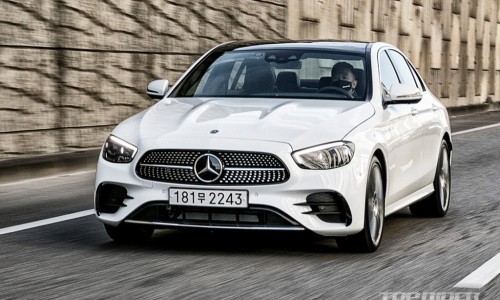 Korea’s’Benz’ love sold more than BMW+Audi
In April 2021, the report card of imported cars in the domestic market was released. According to the Kaizu-U Data Institute, Mercedes sold 8430 units in the month of April, ranking first, followed by BMW and Audi. In particular, Benz sales are BMW and Audi …
www.top-rider.com 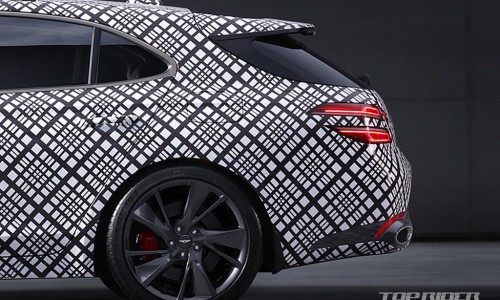 Genesis G70 Shooting Break Teaser Revealed, How Is It Different?
On the 7th, the Genesis brand released the G70 Shooting Break teaser through the Genesis global SNS account. This is the first step since Genesis officially announced its entry into Europe on the 4th, and is a European strategic vehicle that Genesis announced. G70…
www.top-rider.com 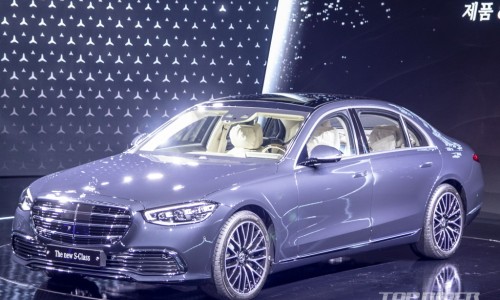 Looking directly at the new Mercedes S-Class, luxury is like this
The new Mercedes-Benz S-Class was launched in Korea. The new S-Class is luxuriously applied in line with the S-Class with Mercedes’ latest sedan family look, and the luxurious and luxurious interior emphasizes comfort and comfort. Especially in the back of the passenger seat of the S580…
www.top-rider.com 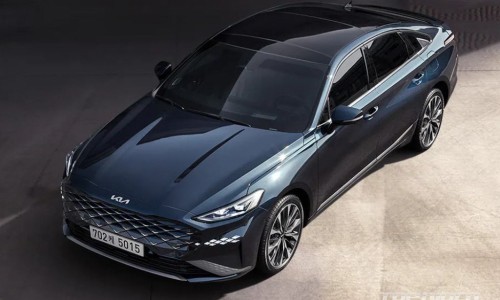 Kia K8 hybrid launched, fuel efficiency 18km/ℓ, price is 3,698,000 won
Kia announced on the 4th that it will release the K8 Hybrid. The 1.6 turbo hybrid engine of the K8 Hybrid has improved performance and combined fuel efficiency compared to the existing K7 Hybrid. Hybrid-only wheel and emblem, hybrid-specific cluster…
www.top-rider.com 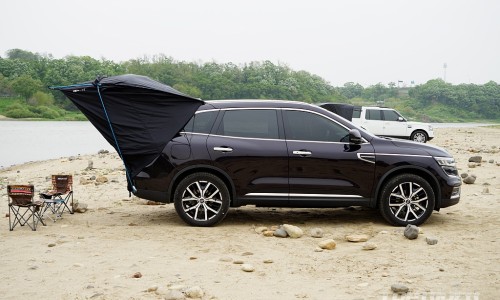 [시승기] Recommended for QM6 LPe and car tent, camping beginners
We conducted a test drive with Renault Samsung QM6 LPe. The situation where the camping culture has become a new trend has become a new reason to choose an SUV instead of a sedan. Now, automakers offer camping packages for vehicles…
www.top-rider.com