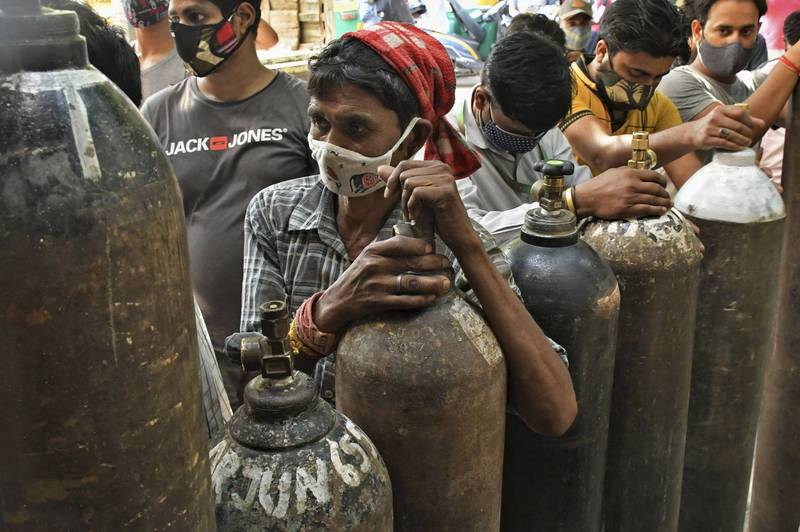 The global epidemic of pneumonia in Wuhan is still severe, especially in India. Many infected patients cannot be admitted to hospitals and can only help themselves to sustain their lives by inhaling oxygen. The picture shows the picture of Indian people waiting in line to fill with oxygen. (Associated Press)

The epidemic broke out in China in December 2019, and so far the vast majority of infected people have recovered. However, some people continue to feel symptoms for several weeks or even months after recovery.

The above data is based on the statistics provided by the health authorities of various countries every day. It does not include the re-estimated data proposed by the statistical units of Russia, Spain and the United Kingdom. The data is only a part of the actual total number of infections, because many cases are mild or asymptomatic. The patient has not been detected.

Globally, on the 7th, an additional 13,882 deaths and 844761 confirmed cases were reported. According to the notified data, the countries with the largest number of new deaths were India (4187 deaths), Brazil (2165 deaths), and the United States (826 deaths).

The United States is still the most severely affected country, with a total of 580,901 deaths and 32.65 million 2,028 confirmed cases.

According to the proportion of deaths to the population, Hungary is the country with the highest death rate, with 294 deaths per 100,000 people. The following are the Czech Republic (277), Bosnia-Herzegovina ( 268 people), Montenegro (244 people) and North Macedonia (243 people).