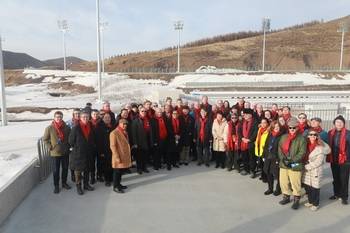 [International News Center/General Report]As the waves of boycotting the Beijing 2022 Winter Olympics are soaring, the Ministry of Foreign Affairs of China invited diplomats or senior diplomats from more than 30 countries including Russia, France, Germany, Italy, etc. Zhangjiakou City, Hebei Province visited the Winter Olympics. Chinese State Councilor and Foreign Minister Wang Yi personally hosted the reception, but the United States, Britain and Australia did not send any personnel to attend.

According to the website of the Ministry of Foreign Affairs of China, at the invitation of the Ministry of Foreign Affairs and the Beijing Winter Olympics Organizing Committee, more than 30 envoys or senior envoys from Russia, France, Germany, Italy, Norway, Switzerland, the Netherlands, Austria, Japan, South Korea, Indonesia, Malaysia, etc. The diplomat went to Zhangjiakou, but did not mention the envoy representatives of the United States, Britain, Australia and other countries.

Wang Yi stated at the reception that the Chinese government attaches great importance to the preparations for the Beijing Winter Olympics, President Xi Jinping personally cares about and guides, and IOC President Bach has expressed confidence and support on many occasions; various preparations are currently proceeding in an orderly manner. Wang Yi emphasized that he believes that the Beijing Winter Olympics will become a bridge that spans ideologies and connects different civilizations. China will definitely make this trip worthwhile for athletes from all countries.

Republican Senator Rick Scott from Florida, USA, and others have also proposed a proposal, accusing Beijing of exerting pressure on Xinjiang, Hong Kong and Taiwan, and calling on the International Olympic Committee (IOC) to cancel Beijing’s right to host the 2022 Winter Olympics and change it. Held in other countries.

Other options include diplomatic boycotts. Some British politicians have expressed support or consumers have initiated boycotts of sponsors of the Beijing Winter Olympics. Athletes from various countries can also publicly criticize Beijing for suppressing Uighurs in Xinjiang and dissidents in Hong Kong.