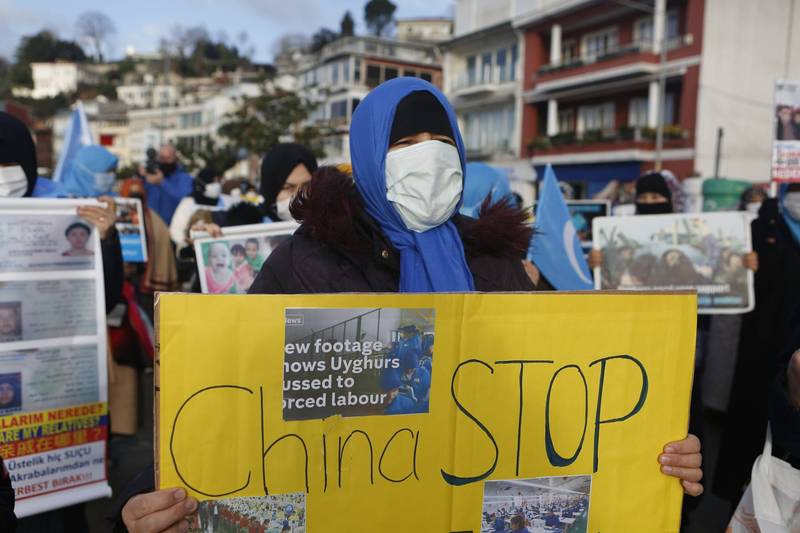 The picture shows a Uighur person living in Turkey, outside the Chinese Consulate General in Istanbul on the 10th, asking China to stop suppressing Uighur Muslims in its territory. (Associated Press)

[Compiled by Mao Yi/Comprehensive Report]The Chinese government has severely suppressed Muslims within its borders. Except for the vast northwestern Xinjiang region, and even the small southern island of Hainan Island, a minority ethnic group of less than 10,000 “Utsul,” Hainan Huis) will not let it go, becoming a new target locked by the CCP.

This ethnic group lives in Sanya City, Hainan Province, with a history of nearly 1,000 years. Several local religious leaders and residents alleged that, but a few years ago, local officials also supported their Islamic identity and their ties to Muslim countries. However, the slogans that originally wrote the important Islamic phrase “Allah is Great” in local shops and homes are now covered by stickers that are 1 foot (about 0.3 meters) wide and proclaim the “Chinese Dream”. The signs and menus of local restaurants are no longer halal food that conforms to Islamic laws. The authorities also closed two Islamic schools and twice attempted to ban Muslim female students from wearing hijabs.

These moves are highlighting a major change in Beijing’s policy. The CCP has stated that the restrictions on Islam and Muslim communities are aimed at curbing violent religious extremism. This is justified by its policy of cracking down on Muslims in Xinjiang, but there is hardly any unrest here in Sanya.

Ma Haiyun, an associate professor at Frostburg State University in Maryland, USA, who specializes in Islam in China, said that strengthening the control of Huihui people reflects the true nature of the CCP’s activities against local communities. This is related to trying to strengthen government control, which is completely anti-Islamic.

Although the Chinese government has repeatedly denied that it is anti-Islam, after the State Council of China issued a secret order requiring officials to prevent Islam from interfering with secular life and government functions, the five-year plan for “Sinicization of Islam” has been accelerated since 2018.