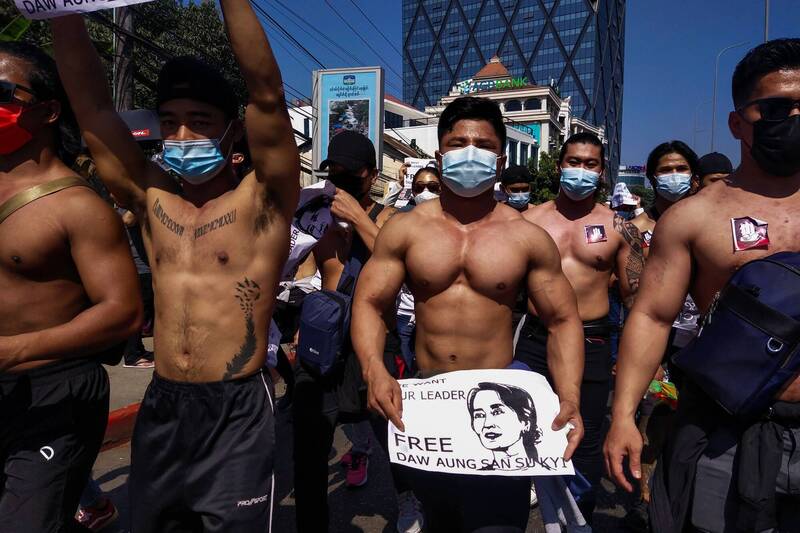 [Instant News/Comprehensive Report]The Burmese demonstrators did not renounce the military government’s ban on gatherings. They took to the streets for five days to protest and demanded the release of Aung San Suu Kyi. Compared with the military’s intimidation strategy, the younger generation expressed their dissatisfaction in innovative ways. Princesses and beauty queens took to the streets with slogans to attract international attention.

“AFP” reported that the Burmese military launched a coup last Monday to overthrow the democratically elected government and arrested the real leader Aung San Suu Kyi, allowing the country to return to the military government after 10 years of democratization. People who are dissatisfied with the military’s seizure of power have taken to the streets for days to demonstrate. The police have recently stepped up armed suppression, firing tear gas, water cannons and rubber bullets.

However, the tens of thousands of people in Yangon did not back down. Many demonstrators took to the streets wearing eye-catching costumes, dressed as princesses and beauty queens. The LGBTQ community also took to the streets, and half-naked hunks held high to release Aung San Suu Kyi’s poster.

Phyo Ko Ko, a personal trainer in Yangon, said that he wanted to contribute to the democratic movement. He said on Facebook, “I don’t want military dictatorship at all,” and also shared photos of him and his companions showing 6 packs and chest muscles.

Another group of female demonstrators took to the streets in satin and lace gowns to protest. One of them had a slogan that read, “I don’t want dictatorship, I just want a boyfriend.”

Outside the Japanese Embassy in Yangon, some demonstrators sat in an inflatable pool expressing their dissatisfaction. The university student who proposed this approach, Moe Myat Theingi, said, “We have been thinking about how to be more creative and how to attract international attention.” “We Gen Z is very smart and will protest wisely.”

Yesterday, a couple of newlyweds took to the streets wearing wedding gowns. Their protest slogan was, “Our wedding can wait, but this movement cannot.”

Myanmar youth also referred to the democracy protesters in Thailand and Hong Kong, and used social media to spread satirical anti-coup memes to raise the international community’s awareness of the country’s plight. 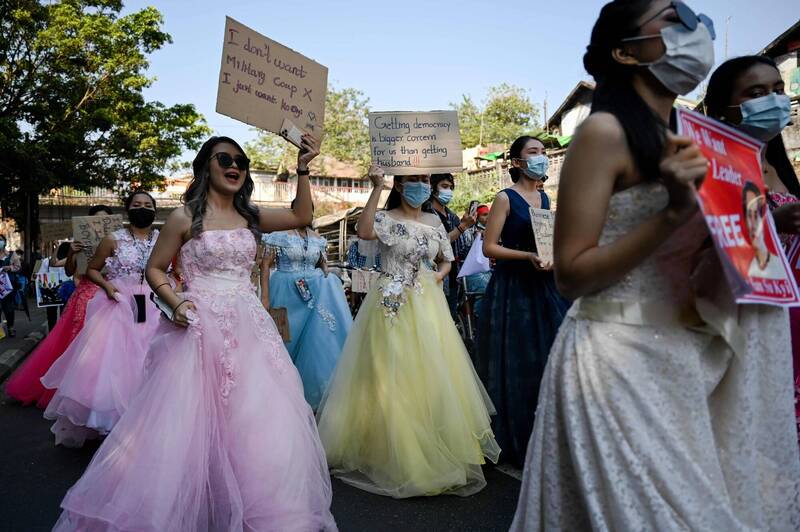 Many demonstrators took to the streets wearing eye-catching costumes, dressed as princesses. (AFP) 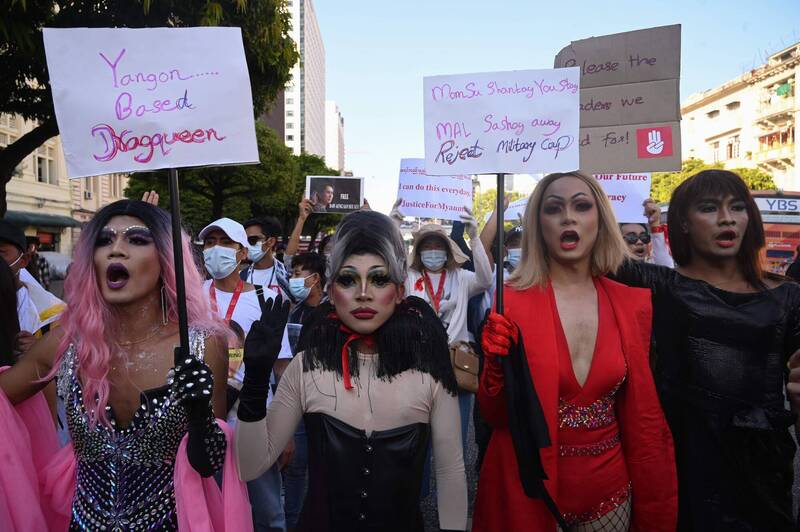 The LGBTQ community also took to the streets to protest. (AFP) 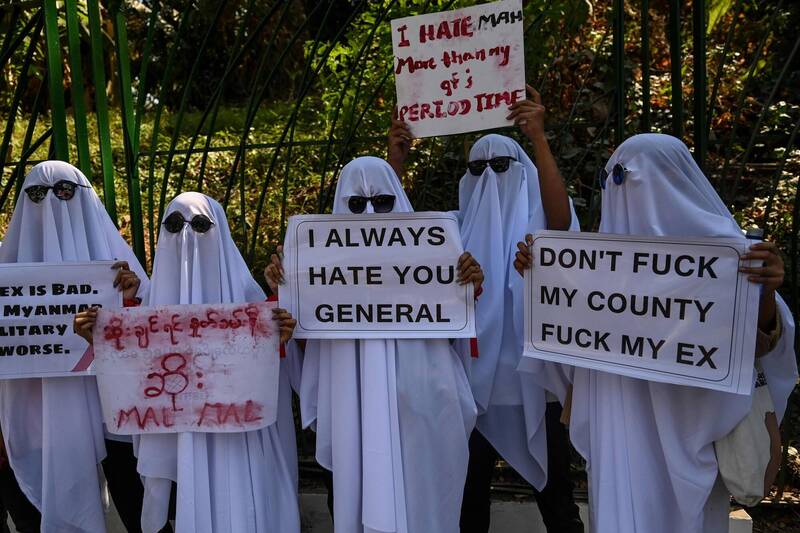 Many demonstrators took to the streets wearing eye-catching clothing. (AFP) 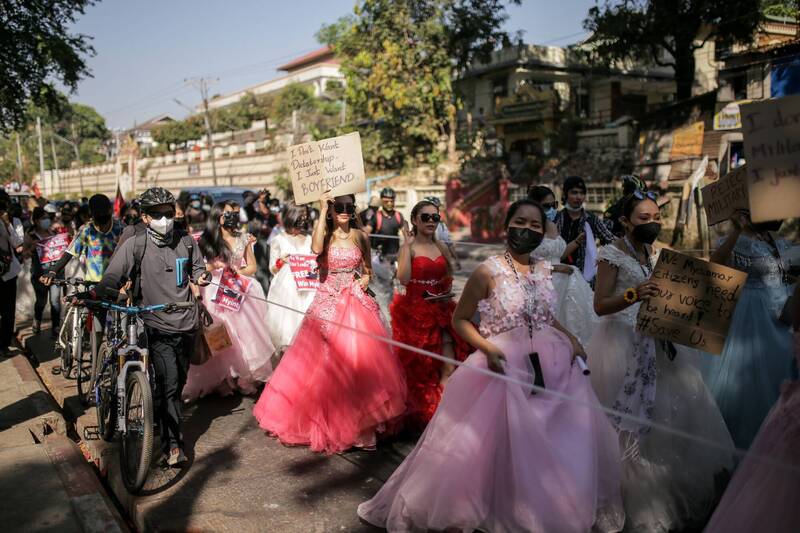 Female demonstrators took to the streets in their formal dresses to protest. One of them had a slogan that read, “I don’t want dictatorship, I just want a boyfriend.” (Reuters) 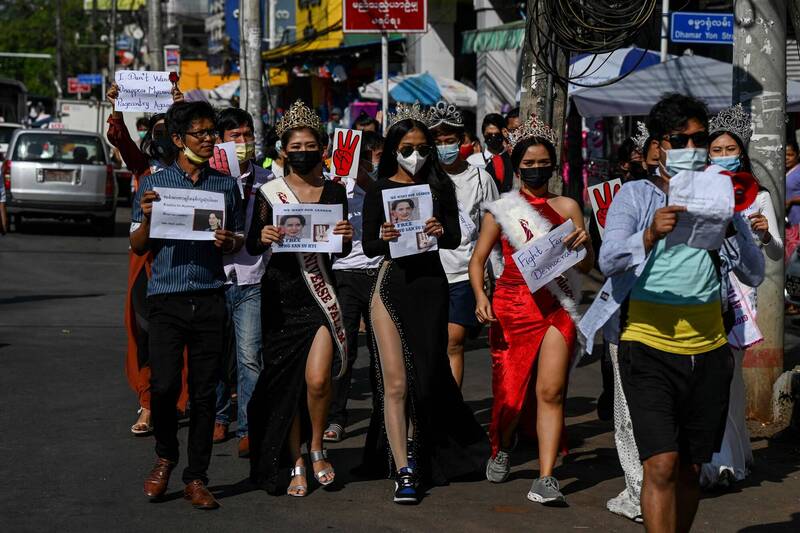 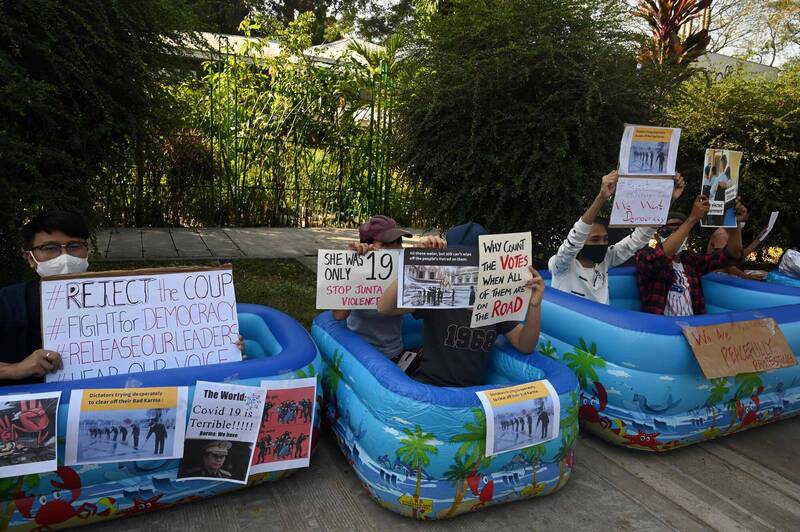 Outside the Japanese Embassy in Yangon, some demonstrators sat in an inflatable pool to express their dissatisfaction. (AFP)