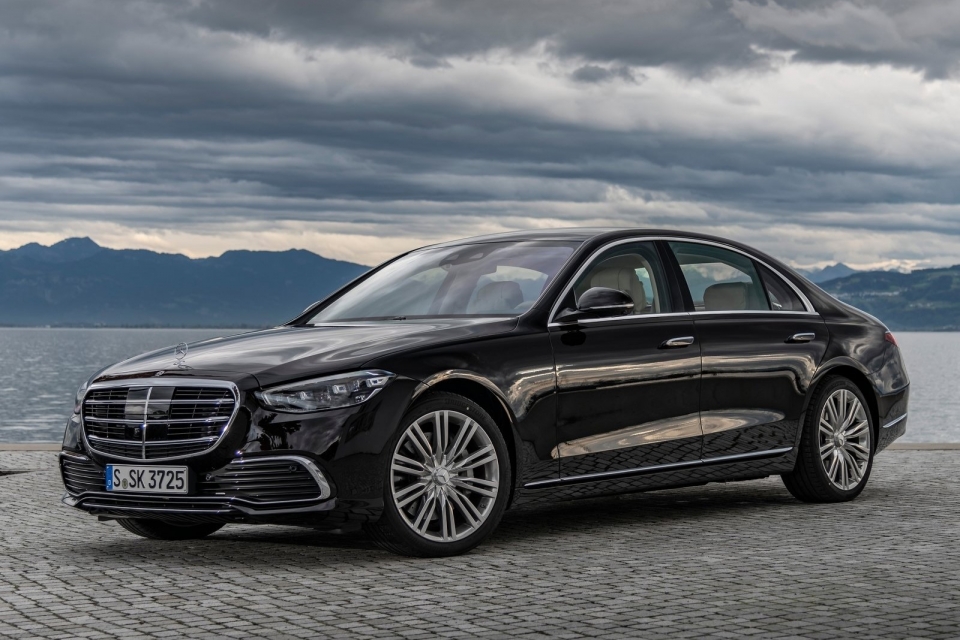 On the 3rd, Mercedes-Benz Korea unveiled the price and main specifications of the 7th generation new S-Class (W223). Since its first launch in 1951, the S-Class is a model that has sold more than 4 million units worldwide for 70 years and has been evaluated as the standard of the segment, and has enjoyed steady popularity with an average of 10,000 units sold annually in the domestic market. 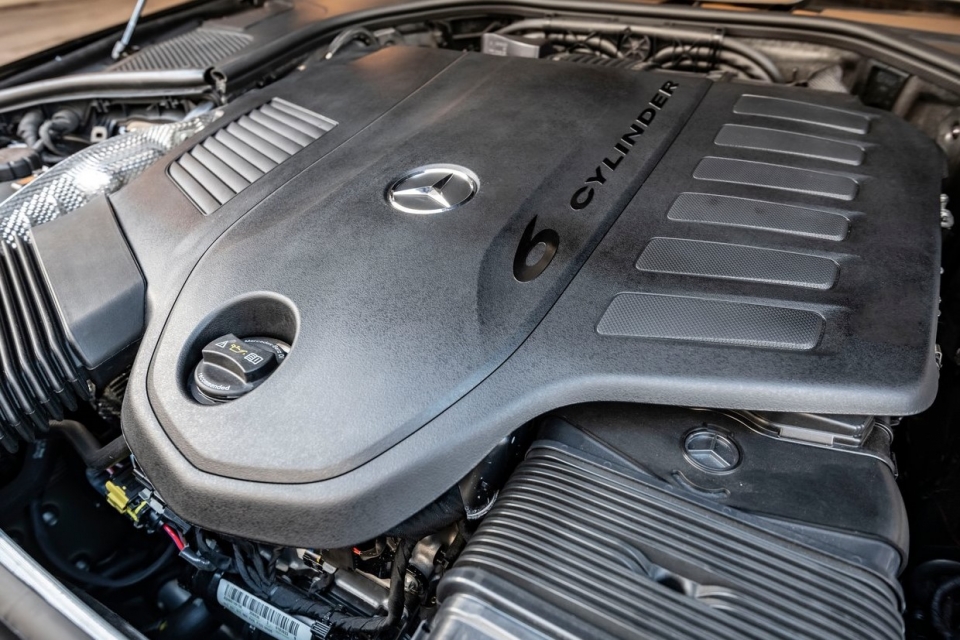 The new S-Class, which will be officially released in the first half of the year, has a total of four lineups based on two gasoline engines and one diesel engine.

The S500 4MATIC is equipped with a 3.0 liter in-line six-cylinder M256 gasoline turbo engine with a maximum output of 429 hp and a maximum torque of 53.1 kg.m. Add to this an EQ boost based on a 48V mild hybrid system. The EQ boost that works during acceleration can deliver up to 21 horsepower and 25.4kg.m more. 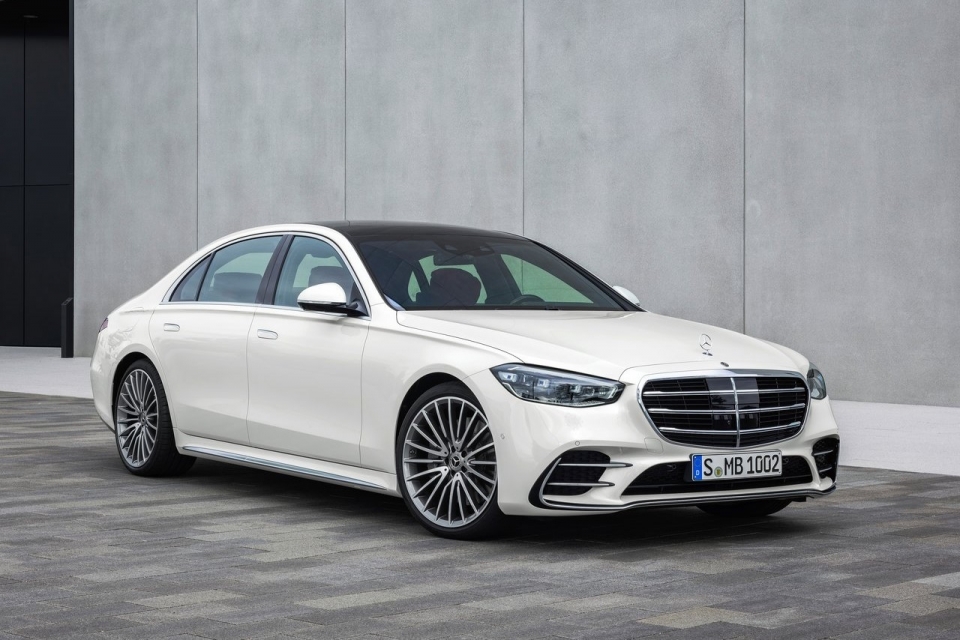 The S580 4MATIC is equipped with a 4.0 liter V8 M176 biturbo engine with a maximum output of 503 hp and a maximum torque of 71.4 kg.m. Like the S500 4MATIC, a 48V mild hybrid-based EQ boost that assists engine power is combined, and the same powertrain will be used for the Mercedes-Maybach S580 4MATIC, which will be released in the second half of the year.

Apart from this, Mercedes-Benz Korea plans to add a plug-in hybrid (PHEV)-based high-performance AMG S63e to its lineup next year, as well as the Maybach S680 equipped with a V12 engine.

11 types of sheet only 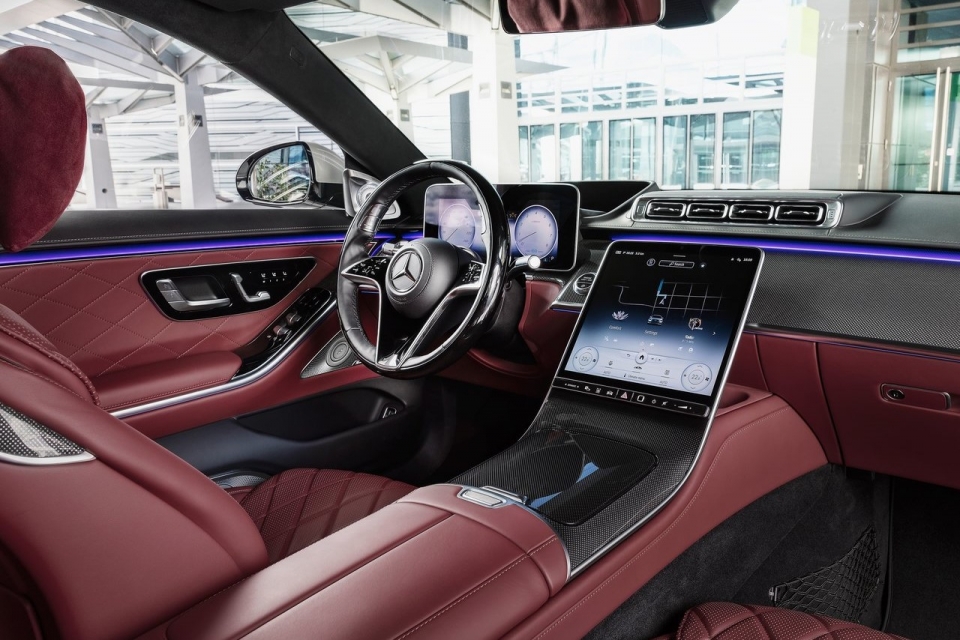 The new S-Class also has a wealth of interior and exterior design options. In particular, there are 11 types of leather seat options.

The appearance of the new S-Class is composed of two designs: standard and AMG line. In addition, the three trims (S400d 4MATIC, S500 4MATIC, S580 4MATIC) excluding the S350d are standard with a long wheelbase model.

The exterior color comes in nine colors, including Obsidian Black. If you include the Digino option, Diamond White, there are a total of 10 color options. In addition, you can choose from seven wheels, including three 19-inch and 20-inch wheels and one 21-inch wheel. 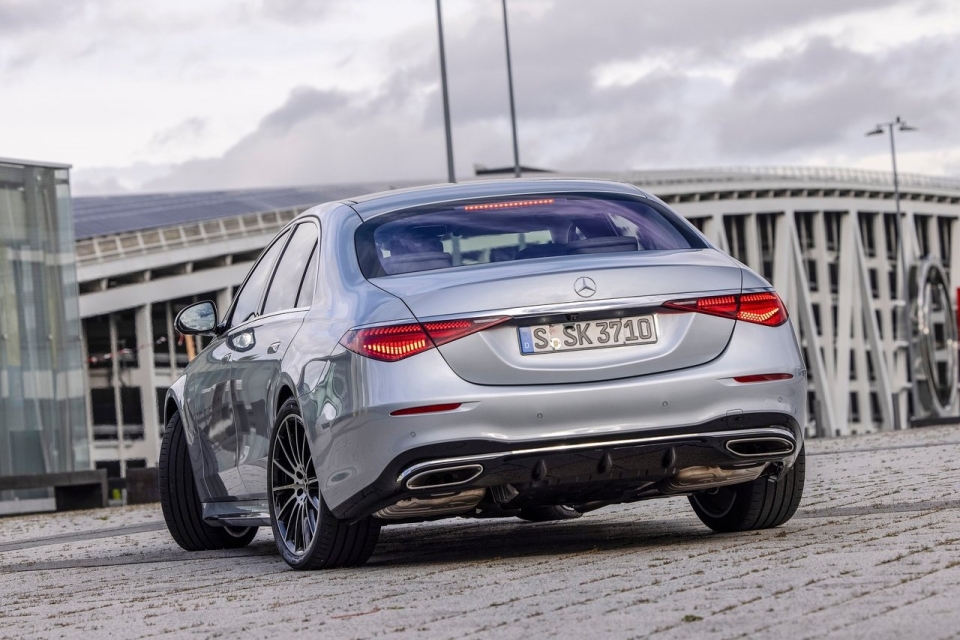 The 7th generation S-Class is also rich in cutting-edge new technologies. Preferred specifications, including airmatic suspension, were applied to the front trim, and rear wheel steering functions can be selected through additional options.

The rear axle steering, which can steer the rear wheel up to 10 degrees, and the MBUX interior assistant, which can control the seat, lighting, and sunroof, are provided as options on all trims. In addition, the energizing package that controls the air conditioning system according to the driver’s condition, driving route and traffic conditions, and the belt bag, a seat belt with an airbag built in, are operated as options on all trims except the S580 4MATIC. 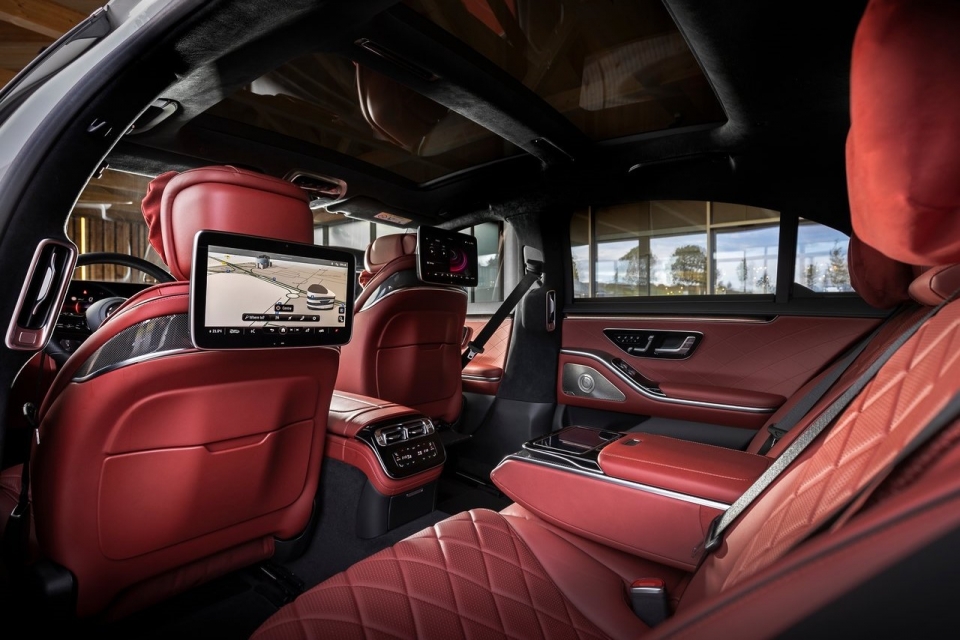 It is also noteworthy that the specifications of a variety of second-row units that fit the flagship sedan. Most product lines, such as reclining function, audio system, and rear seat monitor, are focused on the S500 4MATIC and S580 4MATIC, which are the top lineups.

Two row electric seats are provided in all trims including the S350d. The seat back can be adjusted up to 37 degrees, and a total of three seat positions can be stored using the memory function. Heat wire, ventilation, and functions are also installed.

An electric headrest cushion that operates in 6 directions is added, and a heated wire that supports neck and shoulder heating functions is also included. Through the pre-safe system, the pressure of the air chamber in the seat is increased and the occupant is closely attached to the seat to relieve the impact of the occupant in an emergency. 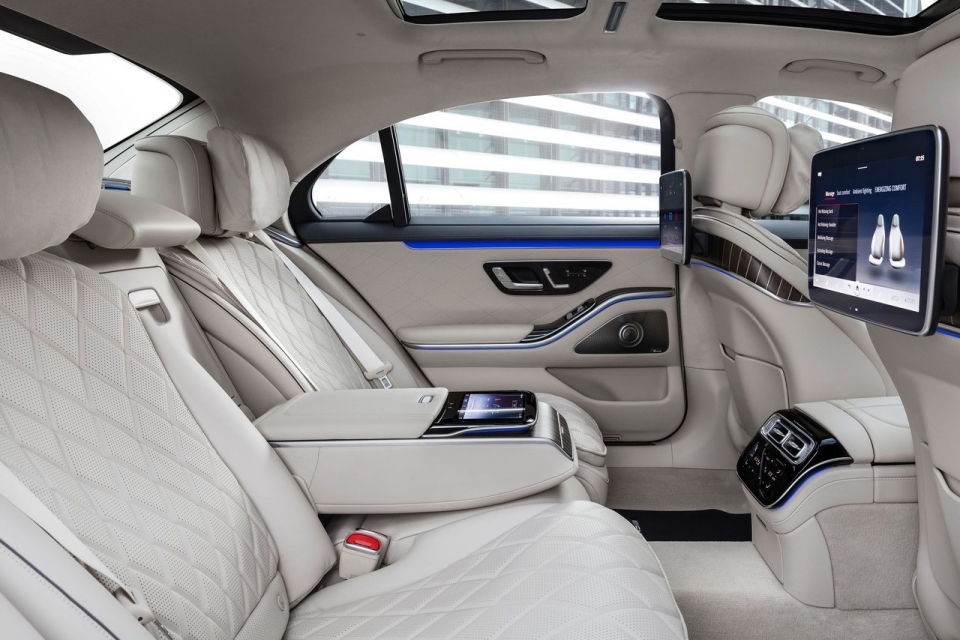 With the addition of the executive seat and shopper package (S580 4MATIC standard, S500 4MATIC option), the backrest angle can be adjusted up to 43.5 degrees with the push of a button. In addition, leg and foot rest, passenger headrest adjustment function, and rear seat monitor are also added. A 7-inch tablet that allows vehicle control from inside and outside and a wireless headset with noise canceling function are also available on the S580 4MATIC and S500 4MATIC.

The Boumester high-end 4D surround sound system with 31 speakers and five sound modes is available as an option on the S580 4MATIC. You can experience 3D stereoscopic sound through 6 broadband speakers, and it further enhances the call quality when setting the driver mode. The VIP seat function, which optimizes the sound of individual seats, was also applied. 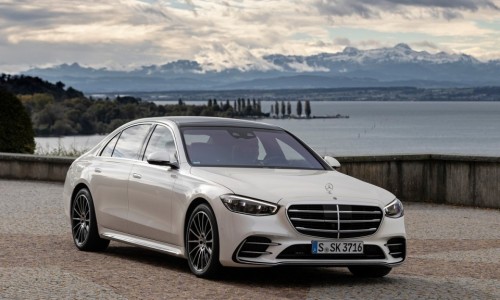 Mercedes’ new S-Class, starting at 140 million won… Maybach input in the second half
Mercedes-Benz Korea has unveiled prices and key specifications ahead of the launch of the new S-Class. The new car is a brand flagship sedan that has been reborn as the 7th generation. The new S-Class, which was unveiled on the global market last year, attracted attention for its unprecedented interior and exterior design, overwhelming driving performance, and level 3 level of autonomous driving technology. The lineups released in Korea include S350d, S400d 4MATIC, S500 4MATIC, S580 4MATIC, etc. It is expected to be released in the first half of the year with 4 types. Following this, the Maybach S580 4MATIC will be introduced in the second half of this year, and in 2022, the Maybach S680 4MA
www.motorgraph.com 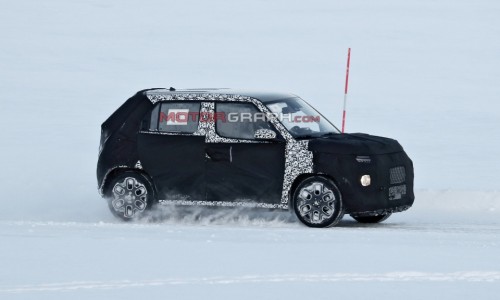 [스파이샷] Hyundai Motor’s new SUV’AX1′, quenched on ice lake
Hyundai Motor’s new light SUV AX1 (project name) is undergoing a cold test this month in an ice lake located in Northern Europe. The new car is a light SUV developed with the aim of targeting the Korean and Indian markets. It has a size that meets domestic light vehicle standards, and is expected to be mass-produced through consignment production of Gwangju Global Motors (GGM). The body size is known to be smaller than the Venue and European strategic SUV Bayon (BC3 CUV). In the case of the Indian market, some specifications, such as the electric length, are expected to change due to bumpers. On the front, the detachable composite lamp and the unique pattern of the radiator grille attract attention.
www.motorgraph.com 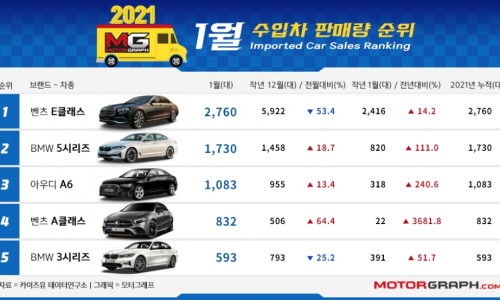 [1월 수입차 TOP50] Mercedes C·S Class’Wince’… BMW onslaught
According to the Kaizu-U Data Research Institute, the number of newly registered imported cars in the first month of the new year recorded 21248 units, an increase of 28.9% from the previous year. However, in January of last year, the “base effect” was considerably reflected as sales of new cars plunged due to a decrease in the number of business days due to the Lunar New Year holidays and the end of individual consumption tax benefits. In fact, compared to December last year, sales volume dropped by 31% . Among the top 20 brands, sales of all brands except Lincoln declined from the previous month. Mercedes-Benz maintained the No. 1 position with 5930 units (7.6% ↑ compared to the previous year) in January. The main car types are
www.motorgraph.com 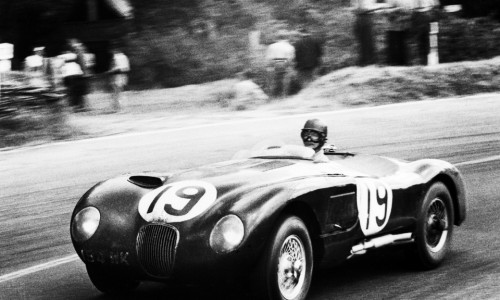 Jaguar,’Legendary Racing Car’ Limited to 8 C-Type… In 1953, the emotion is the same!
In celebration of the 70th anniversary of the birth of the racing car “C-Type,” Jaguar is producing a limited number of continuation models. Jaguar operates a “continuation program” that reproduces the brand’s historic model. The fourth model, the C-Type, is handcrafted at the Jaguar Land Rover Classic Works, a classic vehicle development and production facility in Coventry, UK. The C-Type, sold from 1951 to 1953, is a Jaguar designer and aerodynamic expert. It features a streamlined body designed by Malcolm Sayre. Held in France in 1951, the first year of its release
www.motorgraph.com 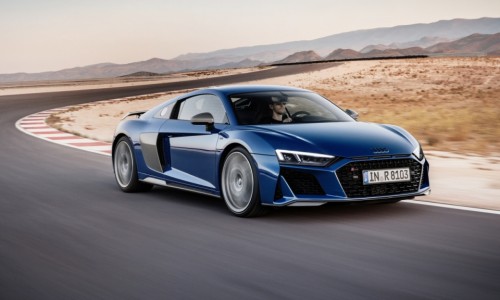 Audi launches ‘610 horsepower’ R8 V10 performance in Korea… Price 257 million won
Audi Korea announced that it will sell the high-performance flagship sports car “The New R8 V10 Performance” starting on the 4th. The new car stimulates the driver’s racing instinct even in everyday life through powerful driving performance, the latest specifications, and a design that incorporates motor sports DNA. The R8 V10 Performance model is equipped with a 5.2-liter V10 gasoline engine and a 7-speed S tronic transmission, which delivers a maximum output of 610 horsepower and a maximum torque of 57.1 kgf m. From a standstill in 3.1 seconds, it increases to 100km/h, the maximum speed is 331km/h, and the official combined fuel efficiency is 6.0km/h.
www.motorgraph.com 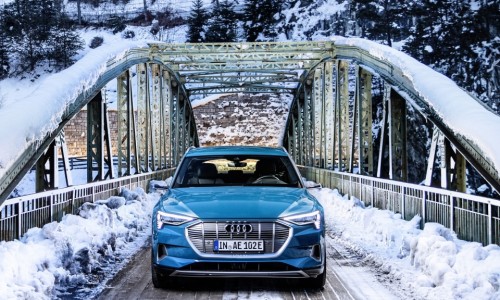 How much will the electric car performance in winter fall?… Tesla Model 3’worst’, best?
The government has confirmed the amount of subsidies for eco-friendly vehicles in 2021. The number of subsidies for eco-friendly vehicles, including electric and hydrogen vehicles, increased 23.8% from last year (99,000 units) to 136,000 units. However, the subsidy per vehicle decreased slightly from a maximum of 8.2 million won to 8 million won. First, the subsidy was differentiated according to the vehicle price range. We do not pay subsidies for 100% for less than 60 million won, 50% for 60 million to 90 million won, and for electric vehicles over 90 million won. As a result, Mercedes-Benz EQC and Jaguar I-Pace were excluded from subsidies, and some trims for Tesla Model 3
www.motorgraph.com