After a series of leaked images of the Galaxy S20 trio is about to be released by Samsung, a recent source from MySmartPrice has posted detailed hardware configuration parameters of all three Galaxy S20s, including Galaxy S20 and Galaxy. S20 + and Galaxy S20 Ultra.

With the Galaxy S20, this is the most standard version Samsung has launched this year. Unlike what was previously leaked that the Galaxy S20 is essentially just a “cheap” version like the iPhone 11, this version has a quite powerful configuration, including a 6.2-inch Dynamic AMOLED screen, WQHD + resolution (3200 x 1440) with 20: 9 aspect ratio, for a pixel density of 563ppi. This screen will have the rumored 120Hz refresh rate and keep the Infinity-O design.

In terms of performance, Galaxy S20 will be equipped with Exynos 990 chip, comes with 128GB storage memory and has support for expandable memory card. The battery of the device has a capacity of 4000mAh, supports fast charging 25W.

Regarding the camera, Galaxy S20 will have a cluster of 3 main cameras including 1 12MP wide-angle camera, 1 64MP telephoto camera and 1 super wide-angle 12MP camera. The camera of the device will support 3x optical zoom and 8K video recording. The selfie camera has 10MP resolution and is capable of recording 4K videos at 60fps. 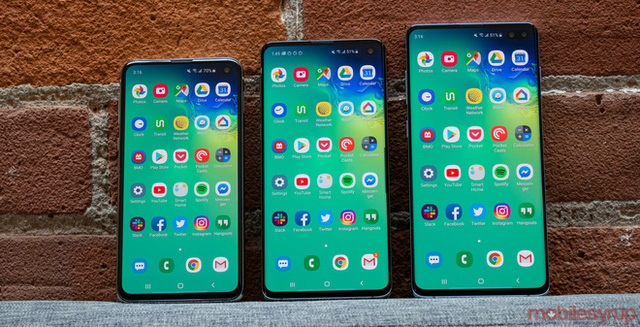 The Plus version of the Galaxy S20 will have slightly more advanced specifications, including a larger 6.7-inch screen, the resolution and screen ratio will be the same. The device has an overall size of 162 x 74 x 7.8mm and weighs 188 grams.

The Galaxy S20 + is also equipped with the same CPU as the standard version, also has 128GB of memory that supports expansion memory cards but has a larger 4500mAh battery. Camera specifications of the Galaxy S20 + will also be identical to the regular Galaxy S20 with 3 main camera clusters 12MP + 64MP + 12MP and 10MP selfie camera.

This will be the most advanced and most expensive version of this year’s Galaxy S20 series. It has a screen size of up to 6.9 inches and the screen ratio is kept the same compared to the other two “brothers”, so this screen has a lower pixel density of just 511ppi, but still extremely sharp.

Regarding the camera, Galaxy S20 Ultra will have up to 4 cameras including 1 108MP wide-angle camera, 1 48MP telephoto camera, 1 12MP super wide-angle camera and 1 ToF 3D camera. This camera cluster supports 10x optical zoom and electronic zoom up to 100x, 8K 30fps video recording. It also has a 40MP selfie camera on the front.

The Galaxy S20 trio will be officially launched by Samsung at the Unpack Galaxy event held on February 11.

Video: This is what happens when a DJI Mavic 2 Pro hits a car windshield at 100km/h: Digital Photography Review