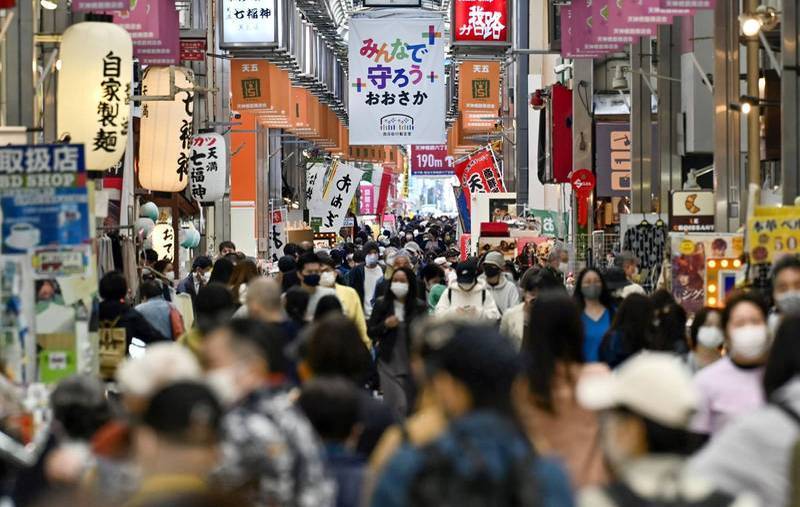 On the 18th, 4,803 confirmed cases across Japan hit a new high since March 21. Osaka Prefecture, where the epidemic is rapidly warming up, has added more than 1,000 cases in a single day for 5 consecutive days. The government has begun to think about issuing an emergency situation three times. The picture shows the streets of Osaka. (Reuters)

[Central News Agency]Since Japan lifted the “Declaration of Emergency Situations” on March 21, the epidemic has not slowed down, but has entered the fourth wave. Yesterday, 4803 confirmed cases across the country hit a new high since March 21. Let the Japanese government start thinking about issuing an emergency situation three times.

Yoshinori Yoshimura, the governor of Osaka Prefecture, whose COVID-19 epidemic is severe, said recently that if the epidemic cannot be contained in the week starting on the 19th, he will call on the central government to issue a “Declaration of Emergency.”

Has the Japanese government issued an “Emergency Declaration” for Osaka Prefecture for the third time? Prime Minister Yoshihide Suga, who is leading a delegation to visit the United States, said in a meeting with reporters from the Japanese press group on the 17th that the “Emergency Declaration” can be used as an anti-spreading measure “Key measures” may take about two weeks to see the trend of the epidemic.

Since Osaka Prefecture implemented key measures on the 5th of this month, two weeks will expire on the 19th. Yoshihide Suga’s statement means that he will look at the development of the epidemic after the 19th, and then make a final judgment on whether to issue an “emergency declaration”.

Japan’s Fuji News Network reported that 4,803 confirmed cases were added across Japan on the 17th, a record high since the “emergency declaration” was lifted on the 21st of last month; the number of new cases in 1 metropolis and 3 counties in the metropolitan area also hit March 21 New highs since the beginning of the day.

The total number of severely ill patients across Japan as of yesterday is that since February 11 this year, more than 700 people have breached the contract in two months.

The Jiji News Agency reported that currently 10 prefectures, including Osaka Prefecture and Tokyo, have been included in the “prevention of spreading and other key measures” applicable areas, making the fourth wave of the epidemic more clear.

The Japanese government issued the “Declaration of Emergency Situation” for the second time at the beginning of this year. By March 21, the entire territory was lifted, and Osaka Prefecture and other places were lifted even before the capital area on February 28.

However, just after the declaration was lifted, it coincided with the annual cherry blossom viewing season, the number of people going out from various places increased, and it was discovered that the more contagious mutant virus strains were spreading widely, so the Japanese government had to announce that the three prefectures including Osaka Prefecture would be removed from the local government. The key measures will be implemented on the 5th, 3 prefectures including Tokyo on the 12th, and 4 prefectures including Saitama on the 20th.

However, judging from the recent epidemic in Osaka Prefecture, the key measures have not been effective, and the Japanese government has issued the “Emergency Declaration” for the third time with a little more realistic flavor. At meetings convened by the Japanese government, epidemic prevention experts have successively asked the central government to issue “emergency declarations,” expressing a strong sense of crisis.

Affected by the rapid escalation of the epidemic and expert advice, the Japanese government’s originally cautious position regarding the third issue of the “Emergency Declaration” has also begun to change.

Japan’s Minister of Economic Rebirth, Yasumi Nishimura, who is in charge of epidemic prevention, said at the Diet on the 16th, “In order to protect people’s lives, as long as it is necessary, one should not hesitate to issue an emergency declaration.”

With the development of the fourth wave of the epidemic, it will inevitably have an impact on the holding of the Tokyo Olympics and the Par Yun. Toshihiro Nikai, secretary-general of the Liberal Democratic Party, the ruling party in Japan, even said on the 15th that if the epidemic is severe, the East Olympics will have to be suspended, causing Japanese society to speak publicly about this heavyweight politician.