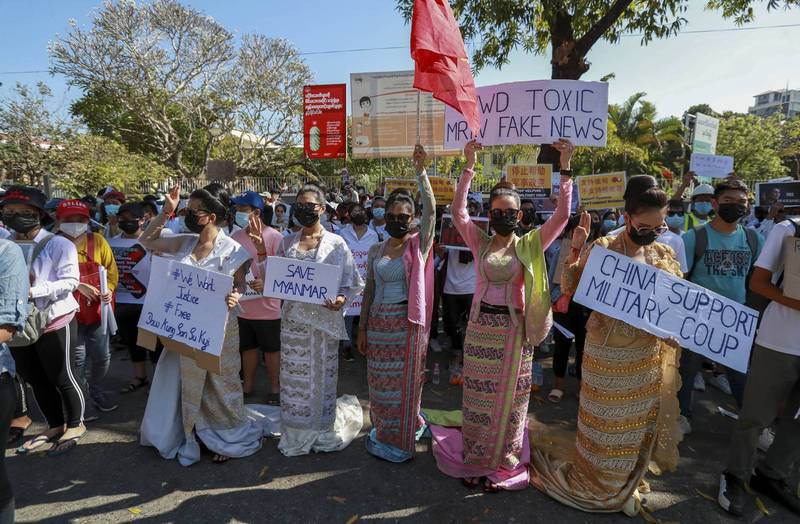 On the 11th, Burmese people protested in front of the Chinese Embassy in Yangon against Beijing’s support for the Burmese military to launch a coup. (Associated Press)

[Instant News/Comprehensive Report]The Myanmar military launched a coup on the 1st of this month to overthrow the democratically elected government led by State Counsellor Aung San Suu Kyi. The outside world continues to question China’s role in it. The Myanmar Citizens’ Group issued a report that at least five Chinese state-owned enterprises provide arms to the Myanmar military and are the main backstage of the Myanmar military.

Secondly, India, Israel, Russia and Singapore each have two companies providing arms to the Myanmar military, while North Korea and Ukraine each have one.

An anonymous spokesperson for “Justice for Myanmar” told RFA on the basis of security that China North Industries Corporation sells weapons to the Myanmar military and the military uses the weapons against the people. NORINCO also operates two copper mines in Myanmar, expelling indigenous people and polluting the environment.

According to reports, news of China’s involvement in the Myanmar coup has been circulating on social platforms recently, including Chinese aircraft transporting technicians to Myanmar, assisting the military in building a network “firewall”, and even Chinese soldiers appearing on the streets of Myanmar. Chinese Ambassador to Myanmar Chen Hai refuted such rumors on the 15th as “nonsense” and emphasized that China had “no prior knowledge” of changes in Myanmar’s political situation. China and Aung San Suu Kyi’s ruling party “National League for Democracy” and military Both sides have friendly relations, and the coup d’état is not what China would like to see.

The relationship between Chinese public and private enterprises and the Myanmar military is inextricably linked. “Justice for Myanmar” According to the public information of the Myanmar Investment and Company Administration (DICA), the information of the Myanmar military and business partners is compiled. The RFA reporter checked the report and found that among the 112 important business partners of the Myanmar government, 20 were involved with Chinese and Hong Kong funds, including Wanbao Minerals (Hong Kong) Copper Co., Ltd. and Yangzi Mining Co., Ltd., which operate the Lebitang copper mine. , Yutong Bus, Myanmar Century Liaoyuan Knitting Factory, etc., at least 9 of which are textile companies. The Myanmar government mainly obtains profits from the garment manufacturing trade with China.

Of these 112 companies, more than 90% have business cooperation with Myanmar’s two major military companies, “Myanmar Economic Holdings Public Corporation” (MEHL) and “Myanmar Economic Corporation” (MEC). The investment of these two companies has reached a large scale. Banking, gemstones, copper mining, telecommunications and clothing industries. The UN report pointed out that Min Aung Hlaing, the commander-in-chief of the National Defense Forces, was responsible for launching the coup from these two major military companies.

The spokesperson of “Justice for Myanmar” quoted the report of the United Nations “Truth Investigation Commission” as saying that the Myanmar military used the proceeds from trade with China to support the National Defense Forces in fighting the “Arakan Army” (Arakan Army) in northern Myanmar and Rakhine State. Serious violations of human rights” and persecuted Rohingya who believe in Islam, but were exempted from criminal liability. The spokesperson also revealed to RFA that the business of the military and related companies is not subject to audits and interference from the Congress. The people have no way of knowing the personal gains of Min Anglai. The decision-making and trading belong to the same group of people, and there is obviously a conflict of interest.

Since the Burmese coup, people’s dissatisfaction with China has deepened, threatening to boycott Chinese goods, and even boycotting the China-Myanmar oil and gas pipeline in Kyaukphyu Port in Rakhine State. Feng Ka-shing, director of ASEAN and East Asia Studies at the Hong Kong Institute of International Studies, who is familiar with Southeast Asian politics, pointed out that anti-China sentiment in Myanmar is not the first time. The Myitsone dam project and the China-Myanmar oil and gas pipeline that Myanmar has cooperated with China are all dissatisfied with Chinese capital. The current anti-China sentiment among the Burmese is related to China’s recent attitude towards the coup.

Feng Ka-shing said that China’s position on Myanmar’s coup d’état is relatively more tolerant and out of touch. It does not comment and does not interfere. On different international occasions, including the UN Security Council or the UN Human Rights Council, China seems to be trying to downplay the Western or international condemnation of the Myanmar coup. Lead to high anti-China sentiment.