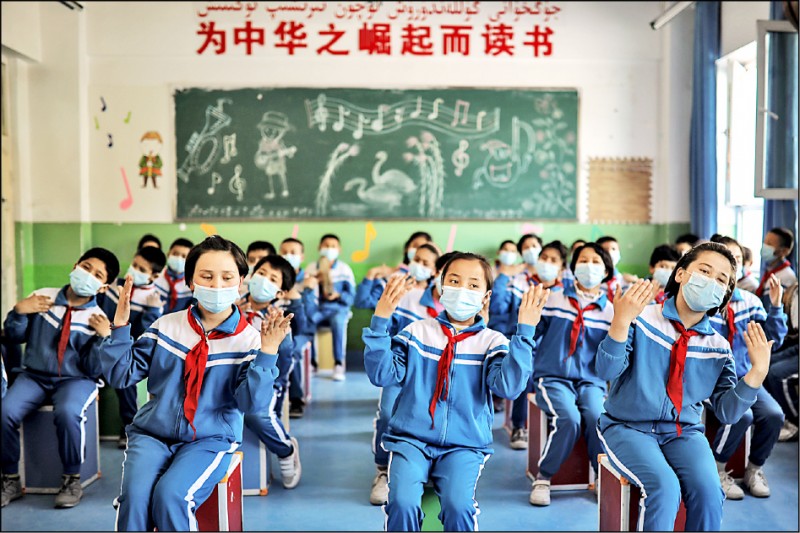 The United States and other Western countries will hold a United Nations meeting on the 12th to discuss the persecution of Uyghurs in Xinjiang. Countries written by China are required not to attend. The picture shows that in April, China arranged for foreign media reporters to visit Xinjiang. A primary school student in Awati County, Kashgar City, Xinjiang performed singing. (Photo by Euronews Agency)

In support of Xinjiang, the United States, Britain, Germany, Canada and Australia, the video conference will be held

[Compiled by Sun Yuqing/Comprehensive Report]The humane persecution of Uyghurs in Xinjiang, China has aroused strong concern in Western countries. The United States and many European countries will host a United Nations meeting on the 12th to discuss how to support the Uighurs in Xinjiang. However, “Reuters” exclusively pointed out on the 7th that China criticized this meeting for “political motivation” and asked all delegations not to participate. In addition, the United States and China also confronted again on the 7th at the United Nations Security Council meeting. U.S. Secretary of State Brinken criticized China and Russia for “impunity for evil” without name.

The Chinese delegation asks all countries not to participate

The United States, Britain, Germany, Canada and Australia will hold a video conference at the United Nations on the 12th to discuss how the United Nations system, member states and civil society support and promote the human rights of the Turkic-speaking people in Xinjiang, representatives from the United States, Britain, and Germany, and international human rights organizations. “Human Rights Watch” CEO Ken Roth, “Amnesty International” Secretary-General Karamard (Agnes Callamard) and others will speak. “Human Rights Watch” Director of the United Nations, Louis Charbonneau, stated on the 7th that Beijing’s strategy of forcing governments to silence for many years was “seriously frustrated,” because more and more countries are willing to speak up.

However, the Permanent Mission of China to the United Nations issued diplomatic notes to various countries on the 6th, saying that the Xinjiang meeting was politically motivated and that the host country used human rights issues as a tool to interfere in Xinjiang and other China’s internal affairs in an attempt to create differences and turmoil and hinder China’s national development. The document also criticized the fact that these countries are obsessed with advocating confrontation with China, and emphasized that provocative meetings will only bring more disputes, and request delegations not to participate in this “anti-China” meeting.

Blinken secretly criticizes China and Russia for “impunity for evil”

At the same time, China, which will assume the rotating presidency of the United Nations Security Council in May, held a video conference to promote multilateralism on the 7th. It is rare for the foreign ministers of China, the United States and Russia to compete on the same stage. U.S. Secretary of State Blincoln criticized that certain countries did not respect the principle of equality of nations established when the United Nations was established, threatened to use force to resolve territorial disputes, claimed the right to establish spheres of influence, or spread false information against other countries, sabotage elections, and crack down on journalists and journalists. Dissidents. Although he did not name his name, he clearly secretly criticized China for its invasion of the South China Sea, Russia’s annexation of Crimea, and intervention in the US election.

Brinken also pointed out on human rights that some countries insist that the United Nations or other international organizations must not criticize internal affairs. However, the Universal Declaration of Human Rights shows that human rights are universal. No country has a “blank check” that can fill in human rights standards at will. Slavery, torture, movement restrictions, ethnic cleansing, etc. were carried out on the people of the country. He warned that when UN member states, especially the permanent members of the Security Council, violate the regulations and obstruct accountability actions, it is tantamount to declaring that other countries can also violate the regulations without having to bear the consequences.

As for the foreign ministers of China and Russia, Wang Yi and Lavrov unanimously emphasized that it is necessary to maintain the core position of multilateralism of the United Nations. Wang Yi urged that all countries should pursue fairness and justice instead of bullying and hegemony, and emphasize that international rules are not the patents and privileges of a few countries, and there should be no exceptionism and double standards.