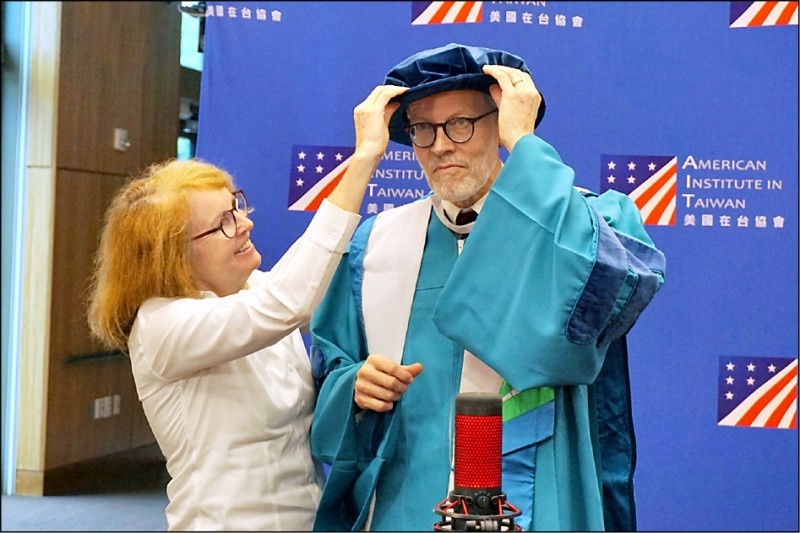 Li Yingjie (right), Director of AIT, was awarded an honorary doctorate in social sciences by his wife Brenda wearing a doctorate gown and tudor hat from Sun Yat-sen University. (Provided by AIT)

[Reporter Xu Lijuan/Kaohsiung]The Director of the Taipei Office of the American Association in Taiwan (AIT) Li Yingjie will be stationed in Taiwan for three years. National Sun Yat-sen University awarded an honorary doctorate in social sciences online, commending him for his outstanding contributions to the promotion of mutual trust, friendship, cooperation and exchanges between the two governments during his tenure in actively promoting Taiwan-US relations.

The day before yesterday, Li Yingjie put on the “Taiwan Youth” doctorate gown and Tudor hat symbolized by Sun Yat-Sen University. He gave an online speech stating that he signed the “Taiwan-US Education Initiative” last year, bringing closer cooperation between the two parties. Sun Yat-sen University plays a vital role in the initiative. The role of becoming Taiwan’s first bilingual education and training base, which will increase the already frequent exchanges between the people of the United States and Taiwan. “This is why I stand here today and accept this honor.”

Sun Yat-sen University pointed out that during his three years as the director of the American Institute in Taiwan, Li Yingjie has successfully achieved “enhancement of Taiwan-US security cooperation”, “enhancement of Taiwan-US economic and commercial relations”, “enhancement of Taiwan’s role in global society” and “Enhancing the relationship between the people of Taiwan and the United States” demonstrates Li Yingjie’s professionalism in the field of diplomacy, communication and leadership skills, and high recognition of Taiwanese society and culture. These contributions have been recognized by all walks of life in Taiwan. Therefore, he was awarded the honor of Sun Yat-sen University. The Doctor of Social Sciences was given to Director Li, commending him for his major achievements in Taiwan-US relations.