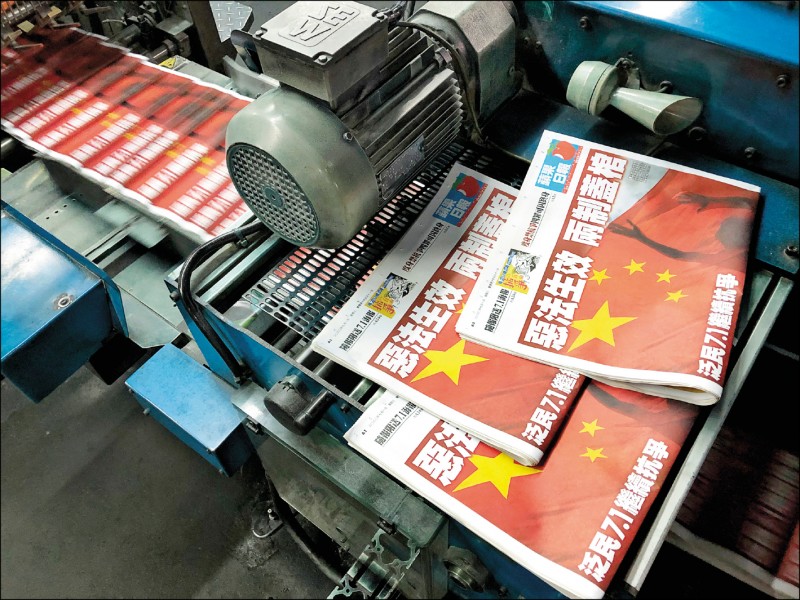 [Compilation Guan Shuping/Comprehensive Report]The Hong Kong Apple Daily was searched and arrested by the Hong Kong government for suspected violations of the National Security Law. The Hong Kong Apple stated on the evening of the 17th that not only will the newspaper be published normally the next day, but also the number of publications will be published. Increased to 500,000 copies, Apple stated that it will continue to stick to its position and “fight to the end to meet the dawn.”

After being searched by the police, Apple Daily issued a “letter to readers,” saying that “this is the worst time in Hong Kong.” News materials obtained honestly were flagrantly labeled as criminal evidence by law enforcement authorities. “History will write down this page.” , “History must have justice.” In an era when the regime arbitrarily draws a red line, Apple firmly believes that “darkness cannot cover the light.” Apple will “continue to loyally guard its position and fight to the end” to be worthy of readers and worthy of the times.

The newspaper stated that it will be published as usual on the 18th, and based on the experience of people buying newspapers after being searched in August last year, it will print up to 500,000 copies. At the end of last month, One Media released a report that as of the end of March, the group had an unaudited bank and cash balance of approximately five. 200 million Hong Kong dollars, enough to support 18 months of operation.

Eight media unions, including the Hong Kong Journalists Association, Next Media Union, and Ming Pao Workers’ Association, jointly stated that this matter raised concerns that the National Security Law was “weaponized” and seriously threatened freedom of the press. They called on the government to announce the details of the case as soon as possible. Yang Jianxing, chairman of the Hong Kong Journalists Association, said that the raid showed that the provisions of the National Security Law that protect freedom of speech and check and balance law enforcement agencies are “equal to zero.” Luo Jiacong, a professor of finance and economics at City University, pointed out that the government clearly wants to “kill” One Media.

The special assistant Mark Simon of Next Media founder Li Zhiying, who is wanted by the Hong Kong police and is based in New York, said that this was a blatant attack on the news editor of Apple Daily, and it was also the first time that the authorities obtained a search warrant for searching news materials. Apple Daily Continued support for democracy has made the authorities dissatisfied. “They finally became angry and they have to finish the matter before the first anniversary of the National Security Law’s entry into force.” He said, “I don’t know how long we can exist,” but Next Media has enough funds to last for 18 months.

British Foreign Secretary Raab condemned Beijing for using the National Security Act to deal with dissidents and called on China to make commitments in accordance with the Sino-British Joint Declaration to protect freedom of the press. Steven Butler, the Asia Project Coordinator of the Committee to Protect Journalists (CPJ), believes that this incident “destroyed any mere illusion that Hong Kong supports press freedom.” Reporters Without Borders and Amnesty International also issued condemnation.