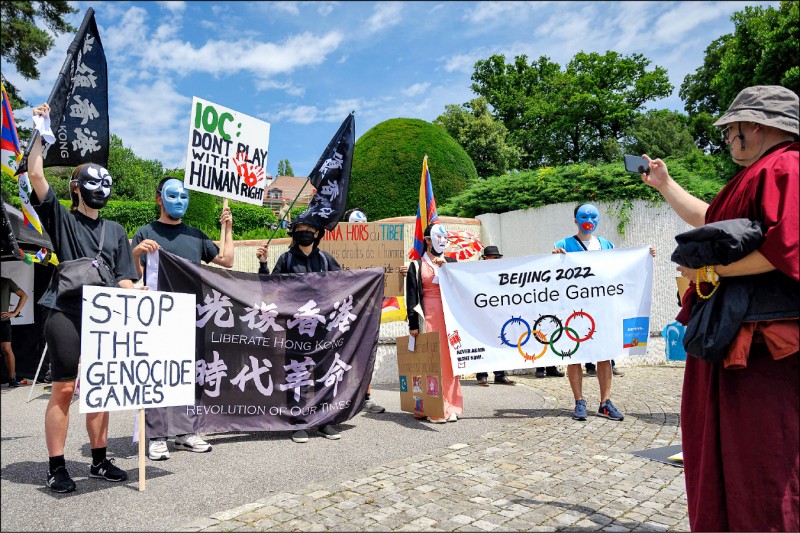 About 200 Tibetan and Uyghur demonstrators gathered outside the “Olympic Museum” in Lausanne, Switzerland on June 23 to oppose Beijing, China’s hosting of the 2012 Winter Olympics. (AFP file photo)

[Compilation Guan Shuping/Comprehensive Report]The European Parliament passed a resolution on the 8th with an overwhelming number of votes, condemning the Chinese authorities for forcing the closure of Hong Kong’s “Apple Daily” in the strongest manner. The resolution called for a diplomatic boycott of 2002 For the Beijing Winter Olympics, sanctions must be for individuals and entities that seriously violate Hong Kong’s human rights and international law.

The European Parliament passed the resolution with 578 votes in favour, 29 votes against, and 73 abstentions. The European Parliament stated that the forced closure of the Hong Kong Apple Daily, the freezing of its assets, and the arrest of reporters are another step by the Chinese authorities to “disintegrate Hong Kong’s free society and deprive the local media and freedom of speech.” The resolution calls on the Hong Kong government to stop harassing and intimidating journalists, release those who have been arbitrarily imprisoned, and abandon any attempt to clamp down on pro-democracy and pro-democracy movements, urge the Chinese government to abolish Hong Kong’s national security law, and encourage EU member states to seriously violate Hong Kong. Individuals and entities responsible for human rights and international law impose sanctions.

The resolution calls on the European Commission, the Council of Europe and EU countries to refuse to be invited to send government representatives and diplomats to attend the Beijing Winter Olympics in 2002, unless the Chinese government is in Hong Kong, Xinjiang Uyghur areas, Tibet, Inner Mongolia, and others in China. The human rights situation in the local area shows “verifiable improvements.”

British Conference: Xinjiang Cotton and Hikvision should be banned

The centrist “Renew” (Renew) party group pushed for a resolution to include a diplomatic boycott of the Beijing Winter Olympics. German MP Engin Eroglu said, “By this resolution, we have made it clear that such high-profile sports activities cannot be allowed. It was held when Uyghurs were slaves, Hongkongers were deprived of their basic freedoms, and Tibetans and Mongolians were oppressed. Xi Jinping cannot be given the opportunity to use this event to achieve his propaganda purposes.”

At the same time, the Foreign Affairs Committee of the British Parliament submitted a report on the 8th after several months of investigations into the human rights situation of Uyghurs in Xinjiang, urging the government to take tougher actions against China on the Xinjiang issue, including diplomatic boycotts of the Beijing Winter Olympics and prohibiting all Xinjiang-related issues. Imports of cotton products in China, prohibiting companies such as “Hikvision” (Hikvision) that provide Xinjiang surveillance equipment from doing business in the UK, speeding up the admission of refugees fleeing Chinese oppression, and forming alliances with Western allies to form “asylum countries”.

US President Biden issued an executive order on the 7th, stating that in view of Beijing’s actions to Hong Kong, including “fundamental undermining of Hong Kong’s autonomy,” which continues to pose a threat to the United States, he decided to extend the national emergency order issued by the former President Trump on the situation in Hong Kong One year; the United States suspended or cancelled the special and preferential treatment granted to Hong Kong under US law under this state of emergency in Hong Kong.