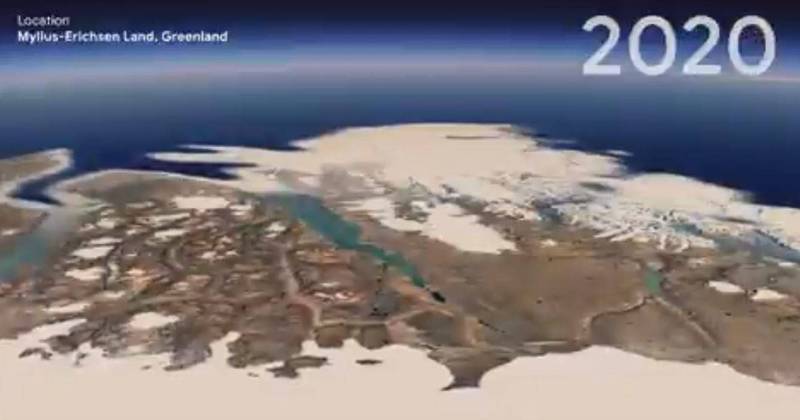 Google Earth has recently designed an eye-opening new feature ─ “Timelapse”, users can use this technology to see what the earth has produced due to climate change and human behavior in the past 40 years Amazing change. (The picture is taken from Google Earth Twitter)

[Real-time news/comprehensive report]Google Earth has recently designed an eye-opening new feature “Timelapse”. Through this technology, users can see the climate change and human behavior in the past 40 years. What amazing changes have taken place on the earth.

According to foreign media reports, this technology first collects static images in Google Earth and converts them into a dynamic 3D mode. Users only need to click on the “Time-lapse Photography” function to see the glaciers retreating and the ice caps melted. , Large-scale urban development and the impact of wildfires on agriculture. Users only need to enter any location into the search field to explore the time-lapse photography of the entered location, whether it is a landmark or a neighbor’s house.

According to reports, “Time-lapse Photography” compiled a total of 24 million satellite photos from 1984 to 2020. Google said that the project took 2 million hours and was processed through the Google cloud of tens of millions of computers. This project is in conjunction with the “Copernicus Programme” promoted by the United States Space Agency (NASA), the United States Geological Survey (USGS), and the European Union, as well as the Sentinel-2 satellite of this project, and Carnegie America. The CREATE Lab at Carnegie Mellon University worked together.

According to reports, Google also said that they have removed all the clouds and shadows of static images, and since 1984, every pixel of every location on Google Earth has been calculated every year, and these images are finally assembled and reduced. Time photography. Google said they hope that governments, researchers, journalists, faculty, and advocates can analyze these images, point out trends and share their findings.

Rebecca Moore, Director of Google Earth, said: “Visual evidence can be used to get to the core of the debate, presenting complex issues that cannot be conveyed to everyone in words.” Moore also said, “We invite anyone to master Timelapse. In your own hands, and share with others, whether you are amazed by the changes in the coastline, like to follow the development of big cities, or track the status of deforestation, Timelapse is to extend the perspective to evaluate us only The health of the homeland is also a tool that can educate and stimulate action.”

00:36 The British Goat took advantage of the blockade of the haunted town and is expected to “be a guest” at the haunted castle