Huami launched many smartwatches under the Amazfit brand last year across different price categories, among which the Stratos 3 we have with us today. It is aimed at athletes and sports enthusiasts and comes with a transflective display, 80 sports modes, and 50-meter water-resistant.

The Stratos 3 comes with a built-in GPS and has 2GB of internal storage for offline music playback. While all that looks enticing on paper, how well does the Stratos 3 perform in the real world? We try to answer that with this review.

The Amazfit Stratos 3 weighs 40.4 grams. It felt bulky the first time I put it on my wrist, but I got used to it quickly, and it didn’t really feel uncomfortable even when sleeping. However, if you have small wrists, you may not have an enjoyable experience with the Stratos 3. 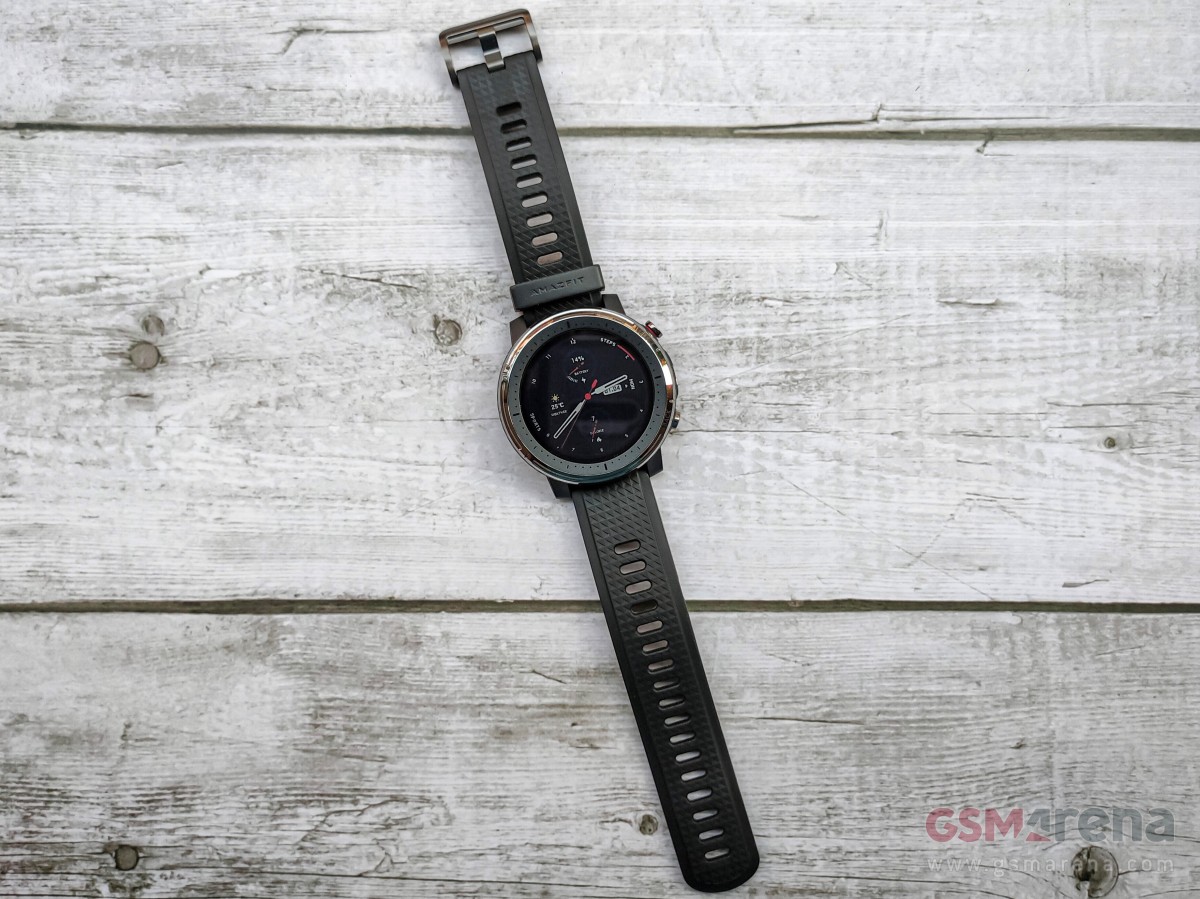 The smartwatch’s silicone straps have a width of 22mm and an adjustable length of 75-118mm. These are quite durable and have enough holes for ventilation. 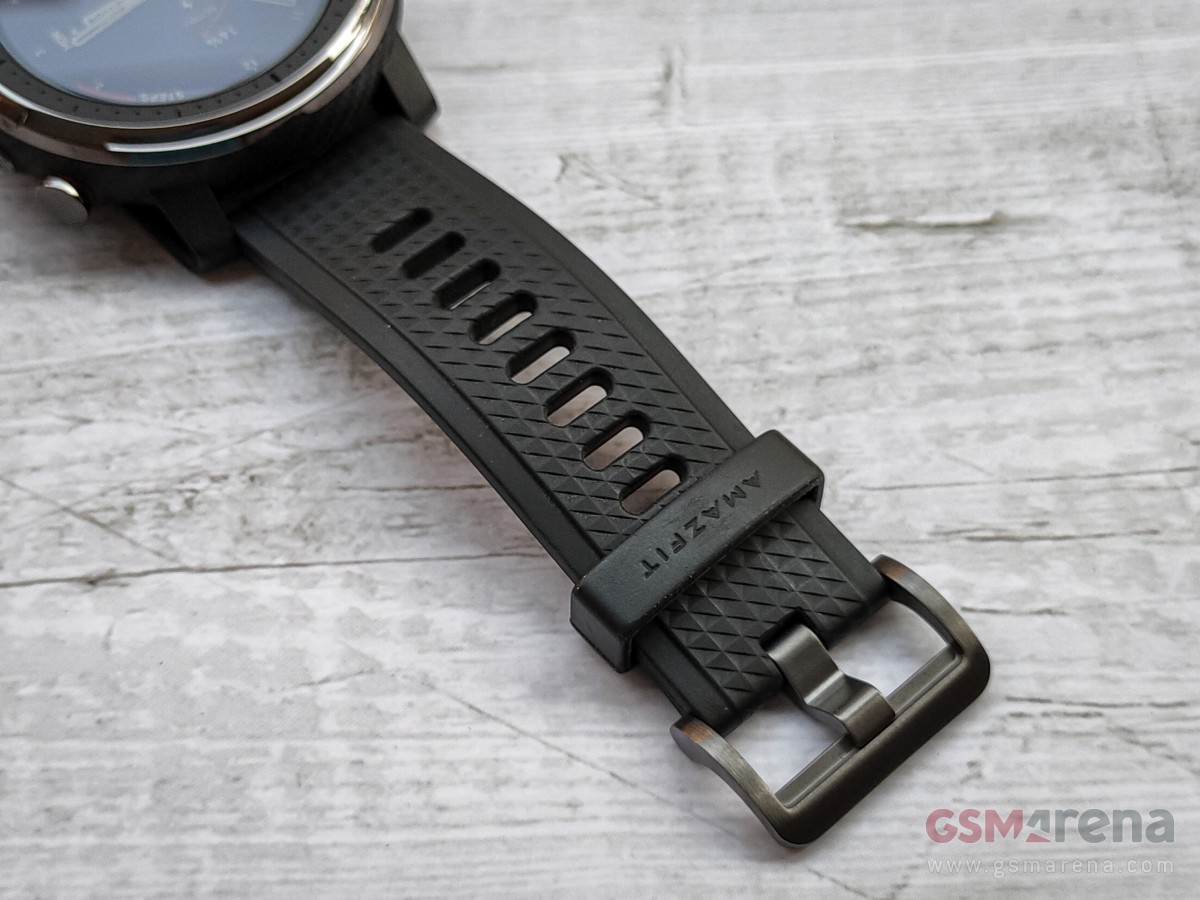 The Amazfit Stratos 3 has a nice, circular design and sturdy build. Its case is made of 316L stainless, with the bezel made out of zirconia ceramic. The four physical buttons on the right side of the Stratos 3 are also built using 316L stainless steel and have decent feedback. 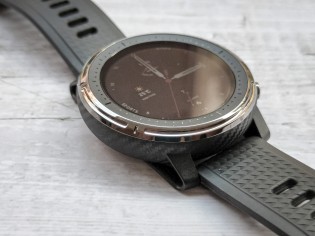 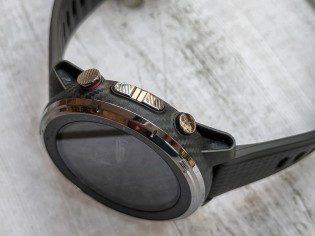 The two buttons placed together in the center let you navigate horizontally and vertically across the UI, while the Select key at the top with a red ring around it offers quick access to sports modes and lets you confirm your actions.

The Back button at the bottom lets you go to a previous menu as evident from its name, but you can also use it to access all the apps when you are on the homescreen instead of using the touchscreen. 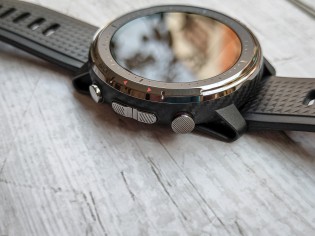 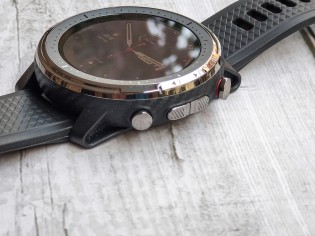 Physical buttons on the Stratos 3

Amazfit has used reinforced plastic for the bottom case of Stratos 3, which houses the charging pins and PPG BioTracking Optical Sensor for heart rate monitoring. The smartwatch is also water-resistant up to 50 meters, so you can use it to track your swimming performance. 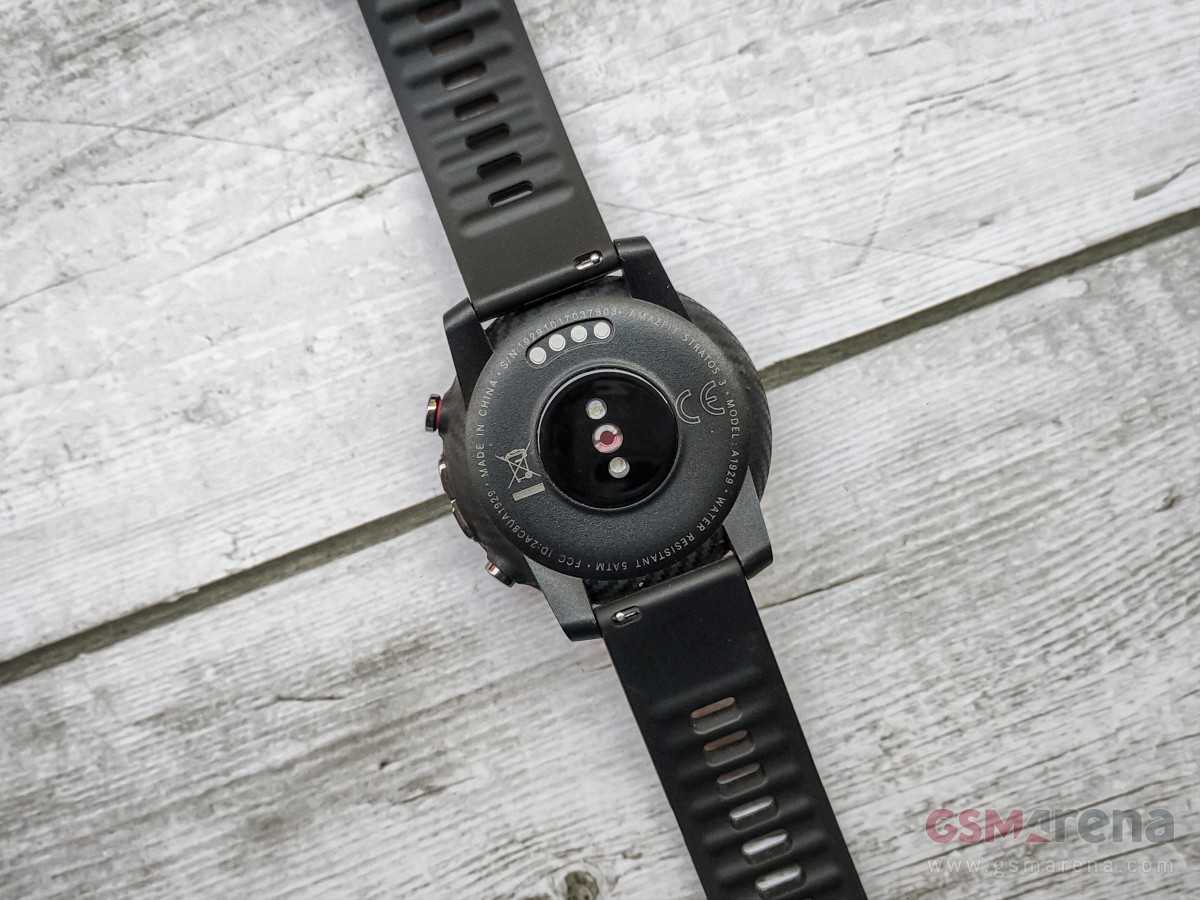 Overall, I quite like the design and build of the Stratos 3.

The Amazfit Stratos 3 packs an always-on 1.34″ full round MIP transflective TFT display, which comes with Gorilla Glass 3 and anti-fingerprint coating and has a resolution of 320×320 pixels.

Being a transflective display, it has excellent outdoor visibility because the brighter the sunlight is, the clearer the screen looks. This makes it suitable for outdoor workouts since you don’t have to turn on the backlight to see the on-screen contents, which helps with power savings.

Indoors, you may have to turn on the screen’s backlight depending on how dim the lighting is. The Stratos 3 has four-level screen brightness, and I never had to crank it up beyond 50%. 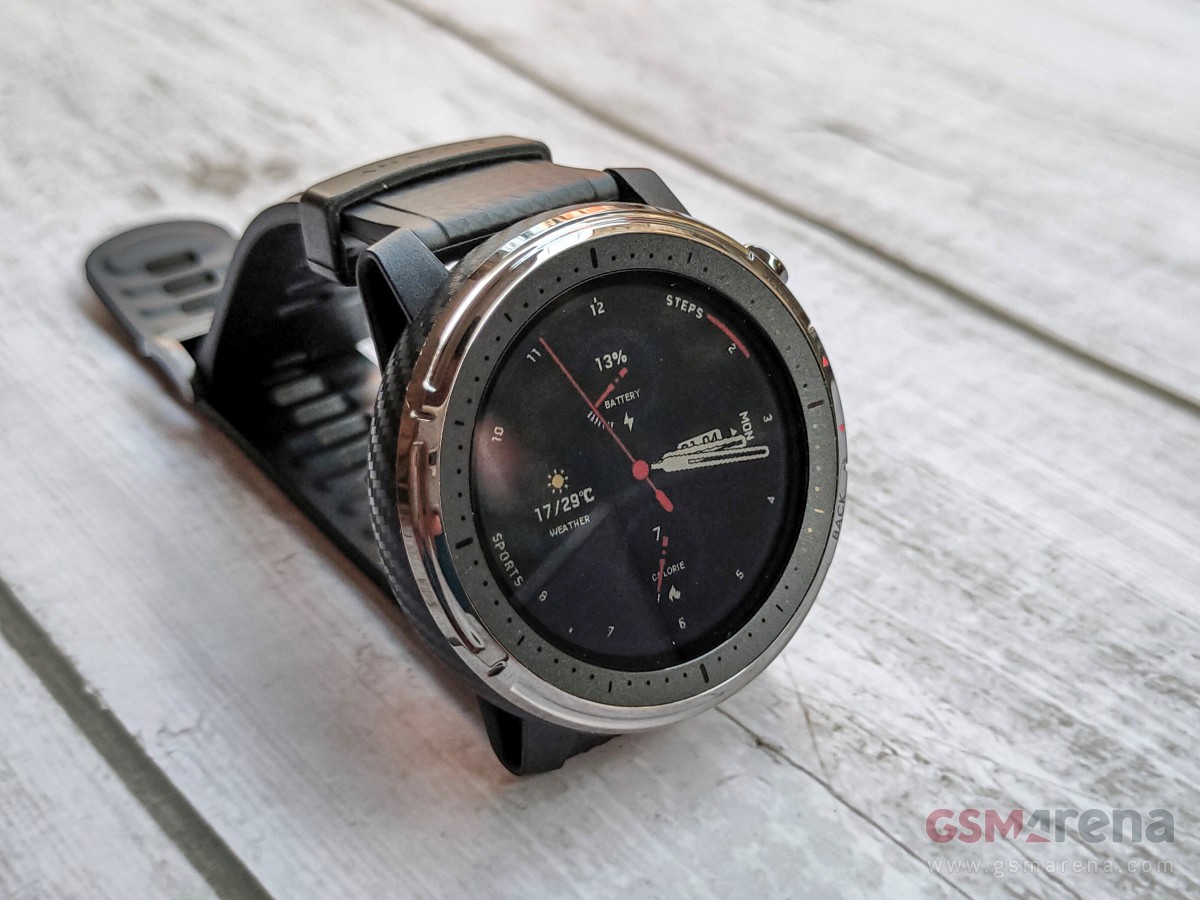 The visibility of the screen under artificial lighting is good enough even at 25% brightness, but the colors actually look better outdoors when you don’t use the backlight, which is turned on when you raise your wrist, press any of the four physical buttons, or double-tap on the screen.

The double-tap gesture didn’t always work, though, so I had to rely on the other two options to wake the screen.

That said, the Amazfit Stratos 3 comes with 11 watch faces on board, with two of them being customizable, meaning you can choose what information you see on the screen. And if you don’t like these watch faces, you can download more by heading to the Watch face store on the Stratos 3, or create one yourself by uploading a photo from your smartphone.

Stratos 3 comes with 11 watch faces and you can create one, too

The Amazfit Stratos 3 is compatible with Android and iOS, and you need the Zepp app on your device to set up the watch, tinker with its settings, and sync data.

The Zepp app was previously called Amazfit, but the rebranding hasn’t improved things since the app still has shortcuts for the same settings at multiple locations, and the ones not supported by the device are grayed out instead of being hidden.

Amazfit Stratos 3 data and settings in Zepp for Android

While the Zepp app remains a mess, the Amazfit OS on the Stratos 3 doesn’t offer an enjoyable experience either, even after picking up three firmware upgrades during the review period. Most of the issues I’ve mentioned in the next section could be fixed with a software update, but Amazfit hasn’t done that yet. 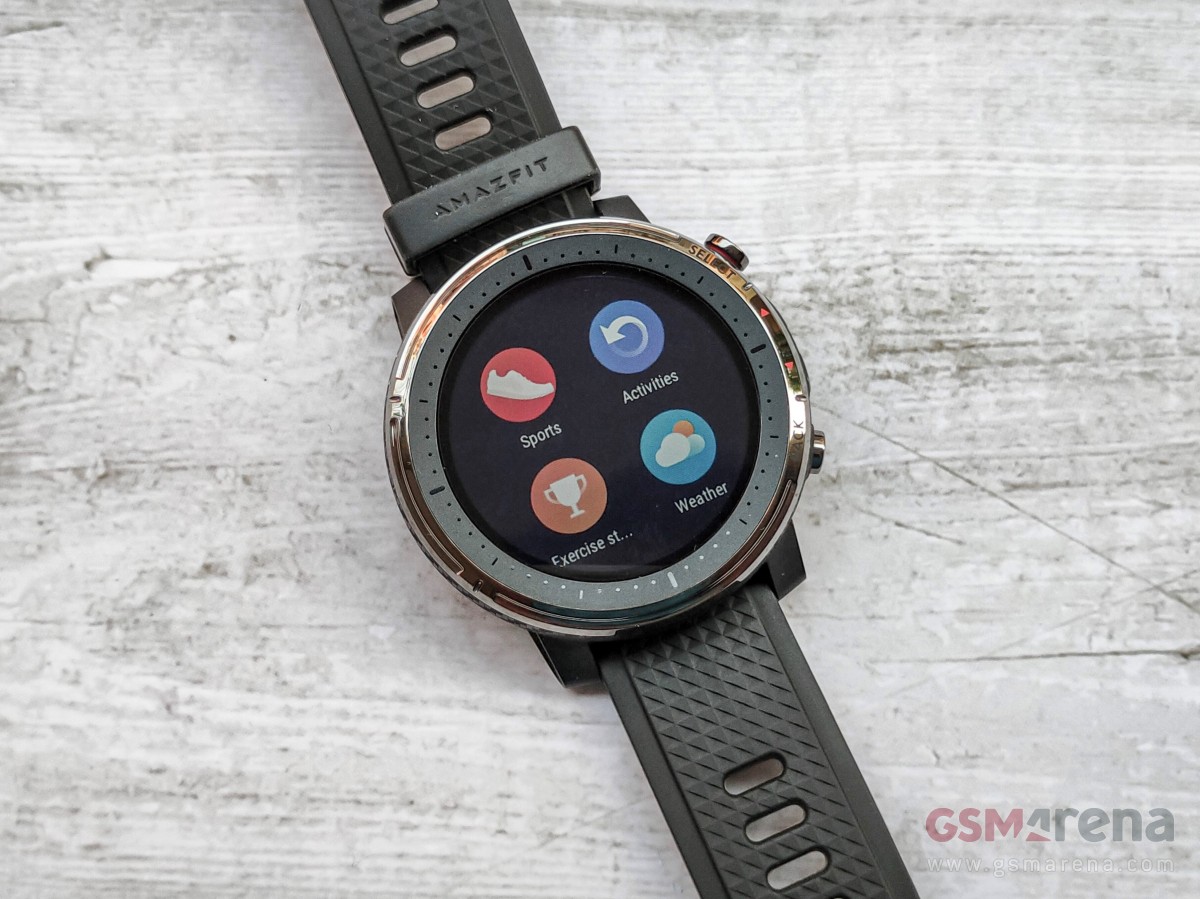 That said, in addition to relying on the touchscreen to operate the Stratos 3, you can also use the four physical buttons it has on its right side. However, those aren’t a complete substitute to the touchscreen since you still have to rely on the touch panel for a few things like swiping right on the homescreen to open the Notification Center.

In addition to that, the Stratos 3 comes with music control, barometer, compass, weather forecast, phone finder, and 2GB of internal storage, which allows you to play music on Bluetooth speakers and earphones directly from the watch without requiring a smartphone.

The Amazfit Stratos 3 uses a PPG BioTracking Optical Sensor for heart rate monitoring, which automatically measures your pulse at an interval of one minute. But you also have the option to measure it manually whenever you want. 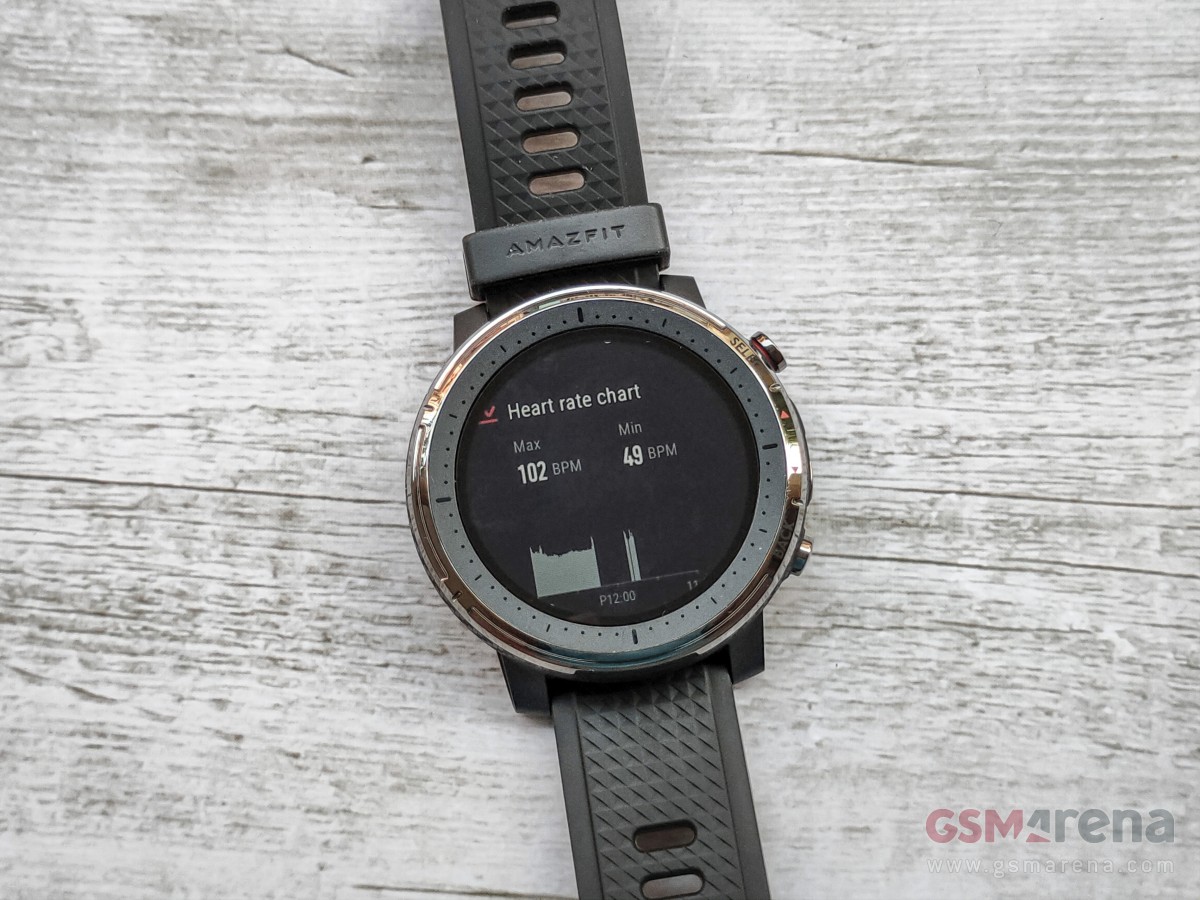 You can get a glimpse of your daily heart rate in a graphical form on the Stratos 3, and head over to the Zepp app for a detailed analysis.

Sleep tracking on the Amazfit Stratos 3 is pretty accurate and just like the heart rate data, you can find your sleep data on the smartwatch as well as the Zepp app. The Stratos 3 holds the sleep records for about a month on its storage and tells you about your total sleep, deep sleep, and light sleep. To check older sleep records, you’ll need the Zepp app.

It’s also worth mentioning that unlike some cheaper Amazfit smartwatches, the Stratos 3 doesn’t track your REM sleep and afternoon naps, which is a deal-breaker for me. And if it’s essential for you as well, then you might want to look elsewhere.

Next up is sports tracking, and like I already mentioned, the Stratos 3 comes with 80 indoor and outdoor sports modes, which are grouped in 10 categories – Run & Walk, Cycling, Swimming, Outdoor sports, Indoor sports, Dance, Combat sports, Ball sports, Winter sports, and Others.

By default, 19 of the 80 modes are quickly accessible with a press of the Select button, but you can customize the list to your liking from the Sports menu on the Stratos 3.

Some sports modes also offer you many settings to tinker with, like changing your activity goals or the background color of the display and the type of sports data you see on the screen during a workout. However, the sports mode list and settings customizations are only possible from the smartwatch and not the Zepp app, which isn’t ideal.

But on the upside, you get to check out all the workout data on the Stratos 3 once the activity is complete. And it’s also accessible through the Zepp app in the Exercise record section. 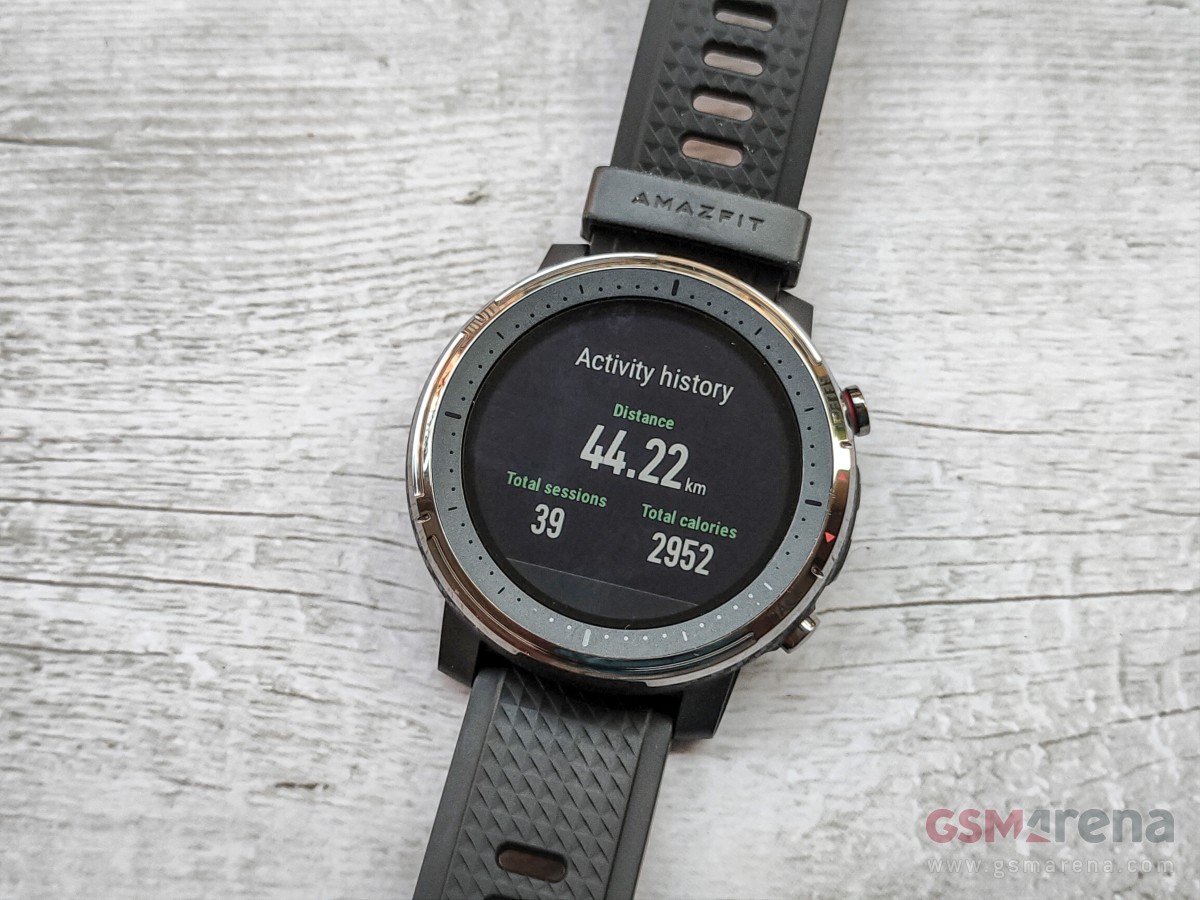 The Amazfit Stratos 3 can also track your outdoor workout routes, thanks to the Sony GNSS chip on board, supporting four different global positioning systems – GPS, GLONASS, BEIDOU, and GALILEO.

For enhanced tracking and accuracy, the Stratos 3 uses these systems in three different combinations – GPS + BEIDOU, GPS + GLONASS, and GPS + GALILEO. You can choose the one you prefer by heading to the Settings > General > Location service menu on the Stratos 3.

I’m impressed with the GPS tracking on the Stratos 3 as it measured the distance and drew the workout path on the map accurately even when it wasn’t connected to the paired smartphone. But it did take long to latch on to the GPS signal at times, which could be improved.

The rest of the features like Idle Alerts and Music Control worked fine. The automatic step counter on the Stratos 3, like many other wearables, records some extra steps, but you should still get a fair idea of your movement.

That said, the notification management needs improvement since the Stratos 3 doesn’t display the corresponding icons of all the apps, and there’s no way to delete a notification when it first pops up on the screen. That’s only possible from the Notification Center. Moreover, there were times when the Stratos 3 stopped pushing notifications, and I had to re-enable them from the Zepp app, which isn’t ideal.

There’s also room for Amazfit to improve incoming call notifications on the Stratos 3 since they continue to appear on the smartwatch’s screen even after you accept/reject the call. Additionally, you get a notification for an incoming call when there’s one ongoing. This creates confusion at times and could’ve been handled in a better way by Amazfit.

Then there’s also the connectivity issue that we’ve seen on other Amazfit smartwatches as well. The Stratos 3 often loses connection with the paired smartphone and takes long to reconnect and sync data at times, which hampers the experience.

The Amazfit Stratos 3 has a 300 mAh battery under the hood, which the company says can provide seven days of autonomy in Smart Mode and 14 days in Ultra Endurance Mode. And if you are using the GPS continuously, the Stratos 3 is claimed to offer 35 hours of endurance in Accurate Mode, 45 hours in Balance Mode, and 70 hours in Power Saving Mode. You can check out the image below to know what that means.

On average, the battery lasted me 3-4 days on a single charge with the following usage and settings:

Once the battery is fully drained, you can charge the Stratos 3 with the bundled dock. Amazfit says it can juice up the smartwatch in 2.5 hours, but in my testing, it charged the cell from flat to 100% in around 1 hour 45 minutes on an average. 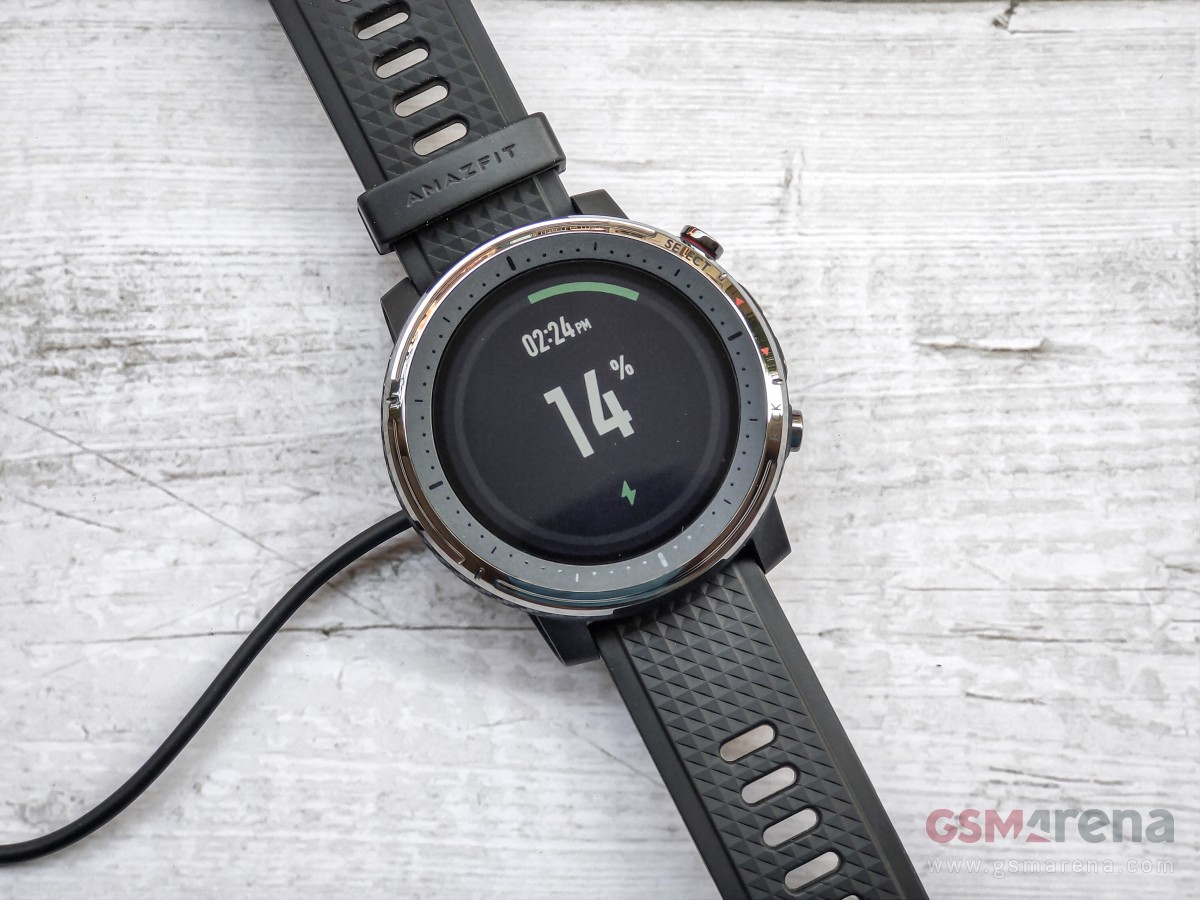 The Amazfit Stratos 3 comes with over 80 sports modes, is good at exercise and health tracking, and packs a transflective display having excellent outdoor visibility. It is also water-resistant up to 50 meters, and the built-in Sony GNSS chip does a great job at GPS tracking. All this makes the Stratos 3 a nice smartwatch for athletes and sports enthusiasts.

However, the not-so-stellar software spoils the party for the Stratos 3 and hampers the user experience. 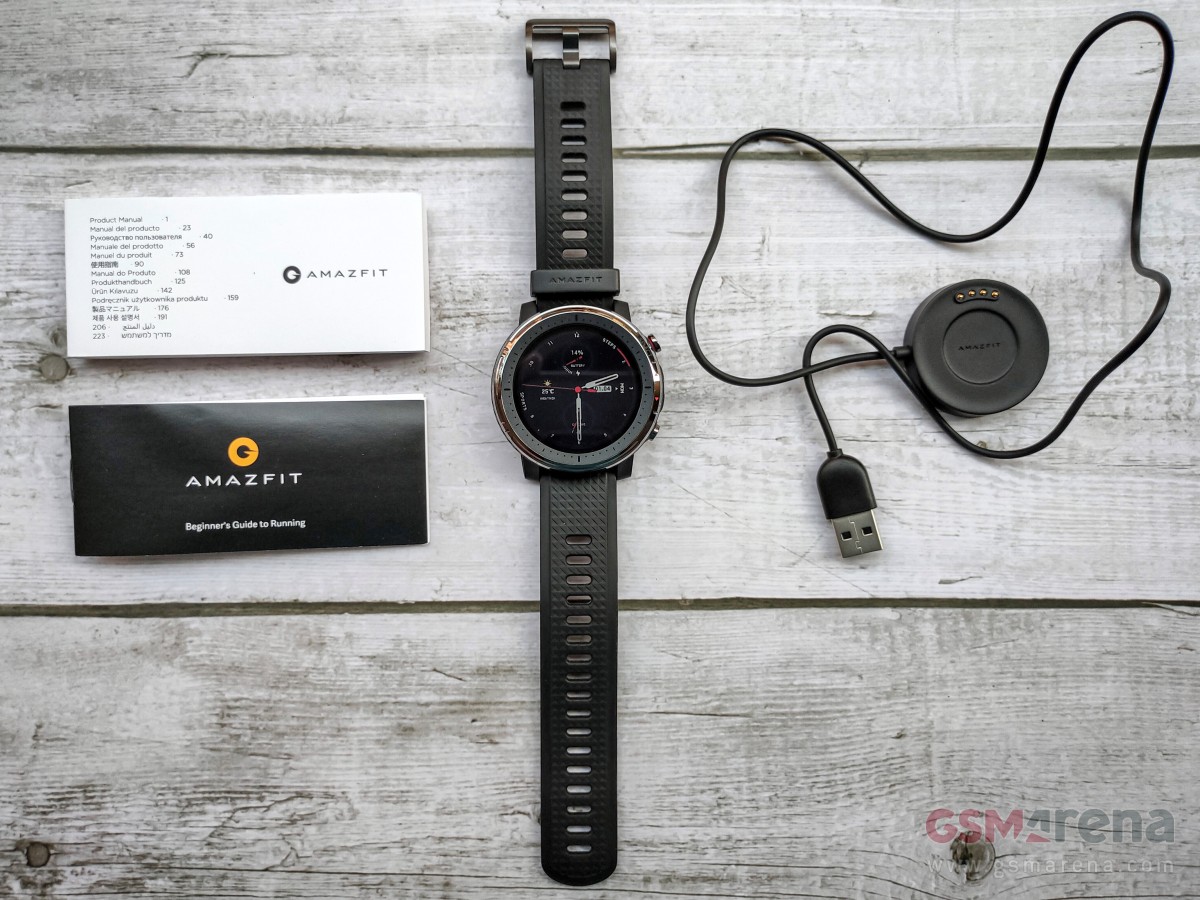 The Stratos 3 is priced at INR13,999 ($190/€160) in India, and in this price range, Amazfit is also offering the GTR 2 and GTS 2 in the country. Both have different designs but come with similar features. They don’t pack a transflective display like the Stratos 3 but make up for it with the SpO2 sensor, REM sleep tracking, and Alexa support. However, neither of them are aimed at athletes and sports enthusiasts like the Stratos 3. You can read our Amazfit GTR 2 review to learn all about it.